Accessibility links
Are Primary Republicans Chasing Romney Or The Reagan Rainbow? : It's All Politics Were he around today, one wonders if Ronald Reagan would have the chance to grow into the figure he became.

Are Primary Republicans Chasing Romney Or The Reagan Rainbow?

Are Primary Republicans Chasing Romney Or The Reagan Rainbow? 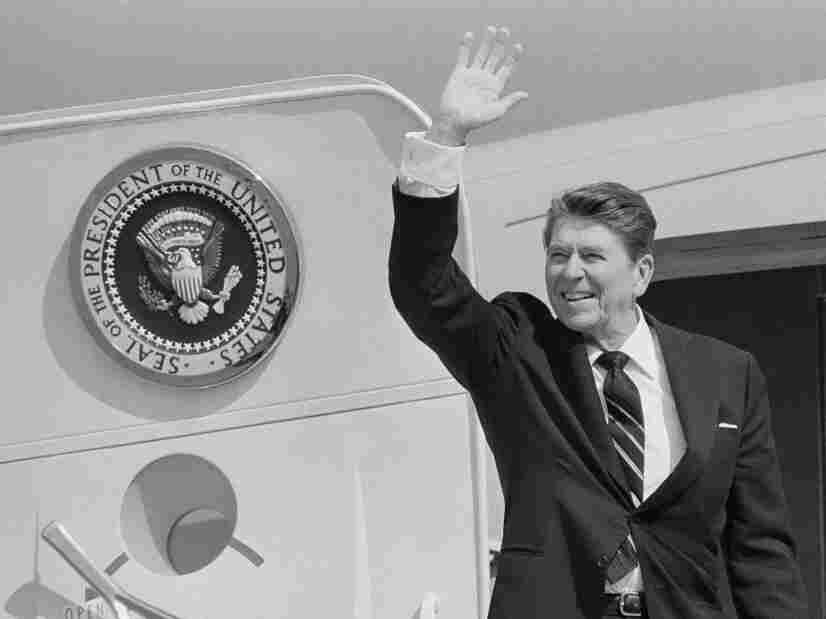 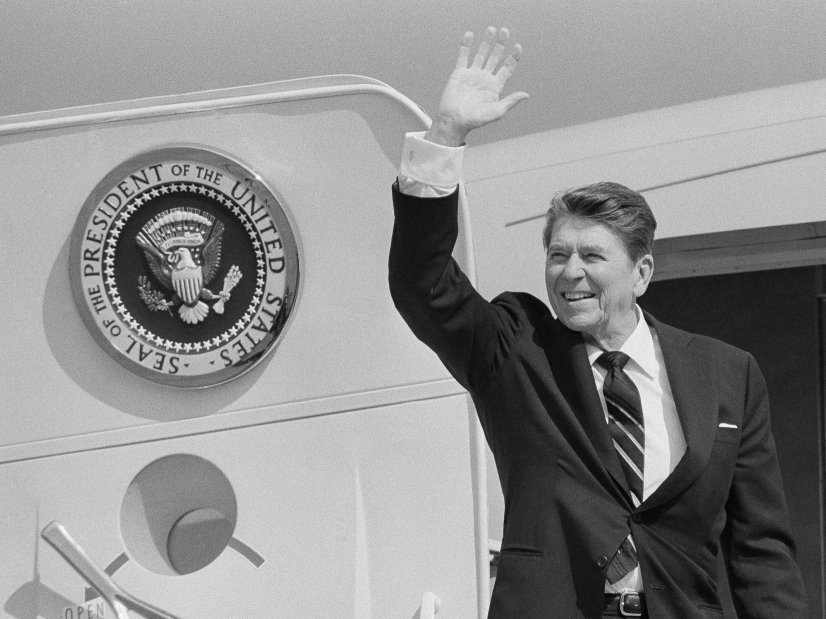 President Ronald Reagan looms over today's GOP field. Here he waves as he boards Air Force One after a brief three-hour visit to Washington state on April 20, 1984.

Rick Santorum's underdog campaign limped out of Illinois to fight another day, but his campaign for the GOP presidential nomination goes forward under a long shadow.

It's not really the shadow of Mount Mitt, even though front-runner Romney's big win in Illinois heightened his pile of delegates. Romney creeps ever closer to inevitability, yet he too is caught in the same shadow of a man who left the stage two decades ago but dominates it to this day.

The man, of course, was Ronald Reagan, whose presidency made the conservative movement a governing and transformative force. Today, for Republicans of nearly every stripe, Reagan remains The Man. 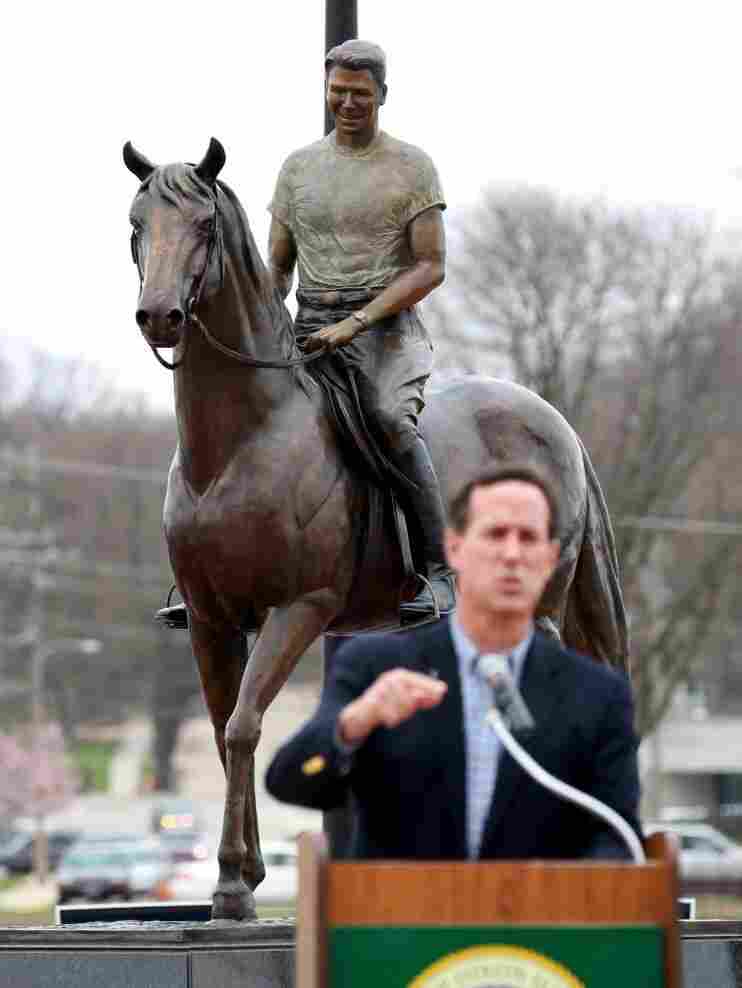 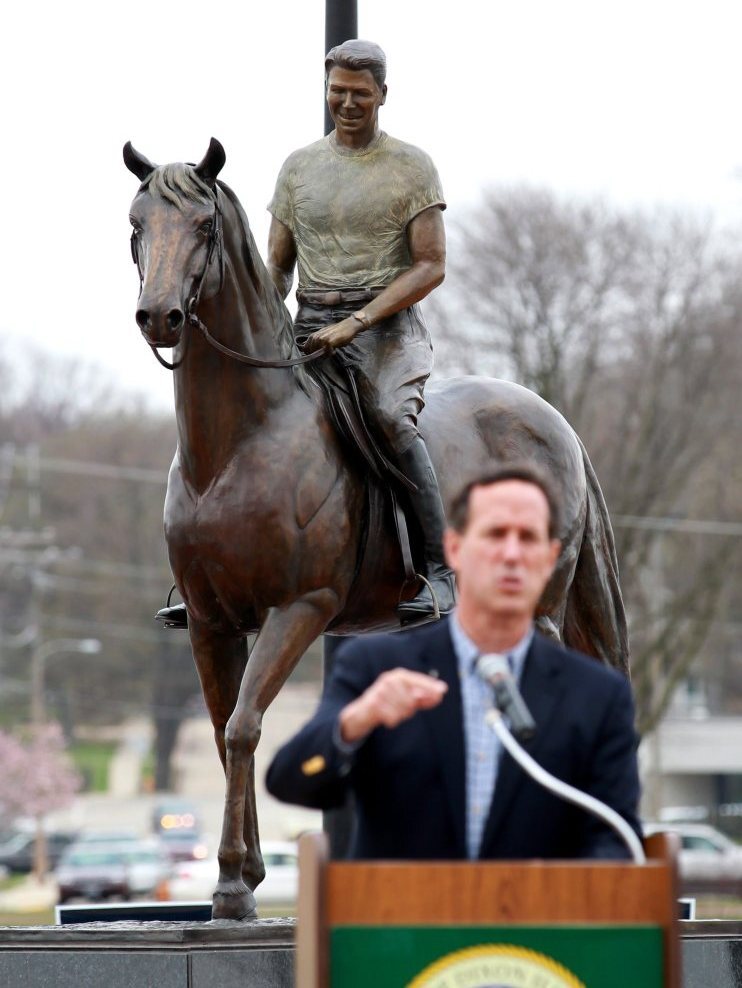 Rick Santorum speaks during a campaign stop in Dixon, Ill., on March 19. Is the party's obsession with Ronald Reagan overshadowing today's candidates?

The power of that image leaped out again this week as Santorum went to Reagan's birthplace in Dixon, Ill., for a speech beneath an equestrian statue of Reagan as a boy. An inspired concept, perhaps, the image suffered somewhat because the bronze statue loomed over the live candidate. Far from measuring up to his hero, Santorum in many camera shots seemed stuck somewhere down there with the horse.

The mismatch was especially unfortunate because Santorum was making such a bald appeal for the personal parallel. He compared his own "insurgent campaign" to the one Reagan ran against the incumbent Republican President Ford in 1976. Santorum said he had won nearly as many states as Reagan did that year, neglecting to mention their relative size or delegate count. (Or the fact that Reagan lost the nomination to Ford, who then lost to Jimmy Carter.)

But Santorum is far from egregious in reaching for Reagan's magic. For decades, countless Republican candidates for office at every level have bowed before the Reagan shrine, and the more conservative they are, the more slavishly they serve him.

Even when Reagan was still in office during the 1988 primaries, his would-be successors wrestled with each other for the mantle. George H.W. Bush had been Reagan's vice president, Alexander Haig his first secretary of state. Jack Kemp clearly regarded himself as Reagan's rightful heir.

And a generation later, the full Republican field of September 2011 would debate beneath the fuselage of Reagan's old Air Force One at the Reagan Library in California. The spirit of the Gipper soared above the proceedings that night just as his aircraft did, and one hopeful after another paid dutiful tribute.

So what's wrong with this picture? Nothing. It's traditional for political parties to extol the virtues of past heroes. Democrats have kept alive the memories and myths of FDR and JFK for far longer than the GOP has lionized Reagan.

The difference is that the Republican obsession with Reagan might be making it harder for them to find their next real hero — or elect their next president.

Think about it. Every time another candidate or commentator goes off on a panegyric about the 40th president, you can hear the old-timers saying to themselves: "Wish we had someone like that nowadays." And you can see the attention of younger voters wandering off.

Generational attitudes aside, it makes little sense to praise a past leader to the point where current leaders cannot compete. Even Reagan himself was not always the mythic figure he's made out to be today. Were he around today, one wonders if he would have the chance to grow into the figure he became.

In the end, all the hagiography may simply set a standard that is impossible for any prospective standard bearer to meet.