Accessibility links
How Collapse Of Health-Care Law Could Help Democrats : It's All Politics The law known as "Obamacare," now in the hands of the Supreme Court, might have become anathema to all Republicans, but the ideas at its heart were meant to be a moderate, practical answer to the pressure for more government involvement.

How Collapse Of Health-Care Law Could Help Democrats

How Collapse Of Health-Care Law Could Help Democrats 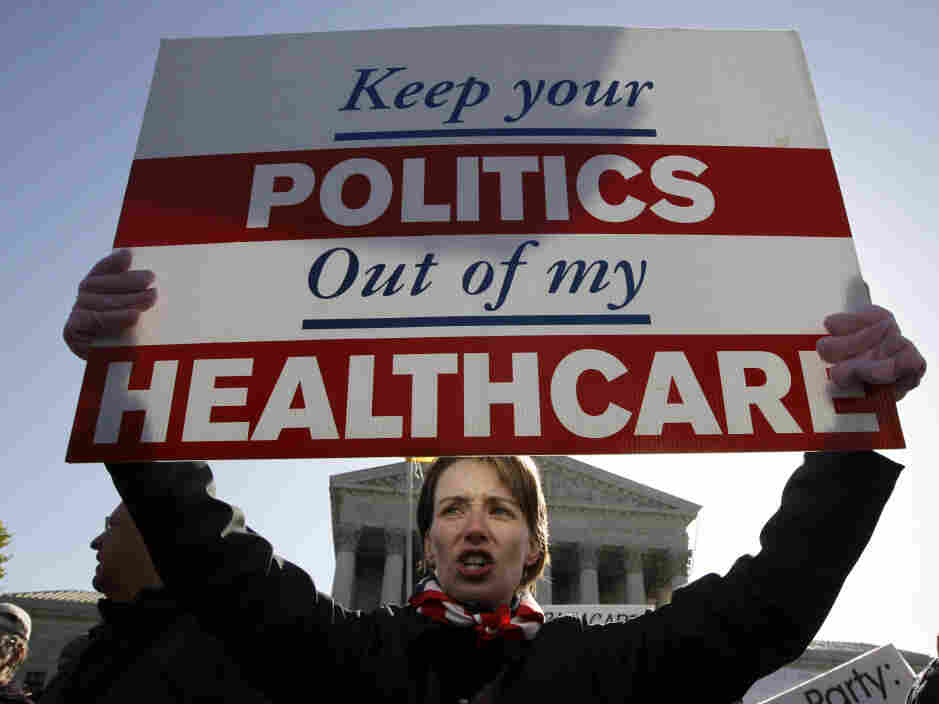 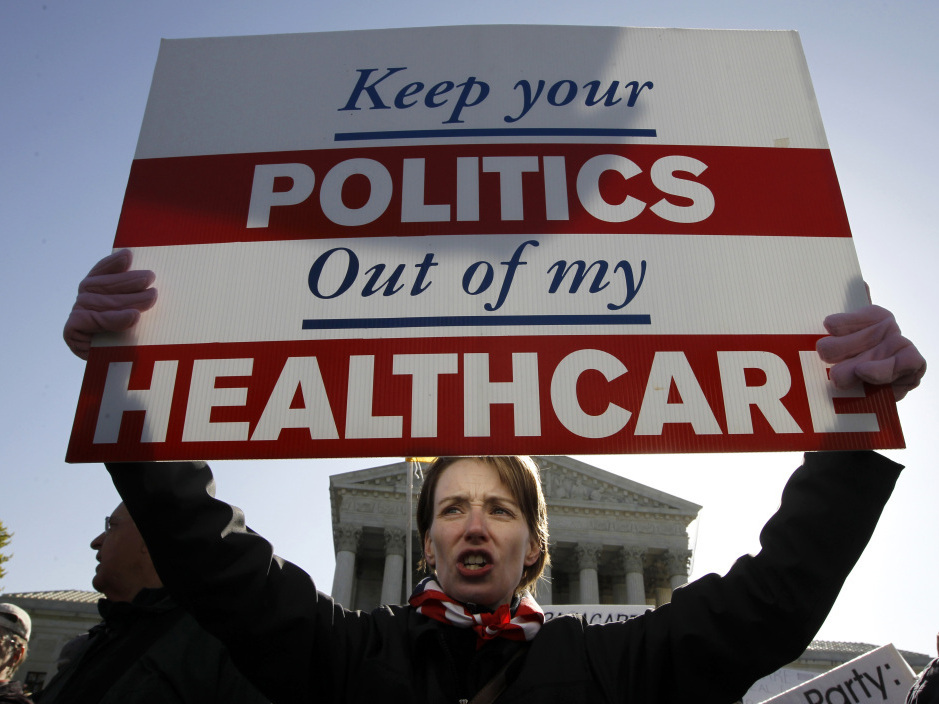 Amy Brighton from Medina, Ohio, who opposes the new health care law, rallies in front of the Supreme Court on Tuesday.

We probably won't know until June what the Supreme Court justices will decide regarding the health overhaul law known as Obamacare. The questions this week from the conservative majority seemed skeptical of the "individual mandate" at the center of the law, yet dubious of the law's survival without it.

(A line of questioning may not be a perfect guide to a justice's thinking, but right now it appears to be the way to bet.)

So let's say it's June and the high court has laid low the whole law. That's terrible news for President Obama and the Democrats, right?

Well, yes and no. Yes, because it's obviously a bummer to have a law that has your name stuck to it struck down by the Supreme Court as unconstitutional. It may be particularly stinging if you once made your living as a constitutional law professor and consider this law your signature achievement. And if you happen to be running for re-election.

So the immediate reaction to the total trashing of the law is likely to be gleeful for the right and brutal for the administration. Imagine, too, the pain of Democrats who voted for the law in 2009 and 2010 and are now former members of Congress, at least partly as a consequence.

But in the longer run, there are ways in which the striking down of the law could help the president and his party. First, it would eliminate an issue that Republicans have rallied around since early 2009, a fundamental element of the Tea Party movement and a focal point for GOP candidates in 2012. Even Mitt Romney, father of a similar law in Massachusetts, has denounced Obamacare and insisted on its repeal.

Second, and conversely, a major hit from the high court could create a bounce-back issue for outraged Democrats in 2012 and beyond. The Democrats have done well in recent decades when they could run on popular disaffection regarding health care, particularly in 1992 and 2008. A chance to rally against the tyranny of the court, striking down popular provisions as well as unpopular, could be potent. Consider how much ground the GOP gained running against the liberal court of Chief Justice Earl Warren a generation ago, or against the Roe v. Wade abortion decision since 1973.

It is increasingly easy to convince average Americans that the court itself is politicized, when all five Republican appointees regularly vote against all four Democratic appointees in high-visibility cases.

Third, and most significantly, striking down this law will narrow the scope of debate about health care and its costs in the future. It means we are going back to debating the status quo versus a national health care system.

The courtroom conversation this week strongly suggested that if the government wants to do something about the uninsured, it ought to have a benefit program and pay for it with taxes. None of the justices came out and said as much, but they made it clear such an arrangement would be as constitutional as Social Security or Medicare.

This guarantees that when the health care debate returns, the idea of universal coverage through a hybrid private insurance system co-existing with government programs will be dead. We should note here that the idea of such a hybrid was originally a Republican idea, going back more than a decade. It was regarded as the best way to forestall "socialized medicine," or a "single payer" scheme run by Washington. And it had promise: Romney's own version in Massachusetts has been successful and relatively popular, even with its insurance requirement.

But the Supreme Court seems about to outlaw such a compromise at the federal level. And if so, it means the next big round of policy debate will be about a national health care plan (think Canada or Europe) replacing a world where insurance costs and the number of uninsured are rising apace. In Texas, it's already one person in four. That will mean more uninsured patients winding up with unpaid bills borne by hospitals and other providers, who load the costs back onto the rest of us — just like now.

No Congress in the near future is likely to adopt a single payer plan. So what seems likeliest is a gradual process by which the age of Medicare eligibility moves down, the age of SCHIP coverage eligibility for children rises, and access to Medicaid is widened to include more income groups. Some call it "Medicare for All," and it is one way to bring "single payer" health care to America.

That is why, in the long run, what we have seen in the past three years will not be remembered so much as a battle between liberals and conservatives as a battle between two kinds of conservatives: the pragmatic versus the pure. Obamacare may have become anathema to all Republicans, but the ideas at its heart were meant to be a moderate, practical answer to the pressure for more government involvement. The pure conservatives in Congress preferred full resistance to any further encroachment, and that view appeared to hold sway with the high court, as well.

The public-private hybrid was a compromise the Obama people proved willing to accept in 2009, when many Democrats preferred single payer or at least a "public option" that made a government plan available to those unable to obtain or afford private insurance. It was part of the White House strategy to lure GOP senators such as Charles Grassley to support the bill. It failed, and the Democrats had to pass the bill themselves and become the party of the "individual mandate."

And by the way, did anyone ever try to defend a less lovely phrase in a political arena? In our national culture, we identify with the individual and against the outside power that mandates something. To be sure, the phrase was a leftover from earlier policy debates. But it should have been deep-sixed early in 2009 if the White House hoped to make its approach popular and attractive. Why not call it "universal participation" or "individual responsibility"? Why not make it something to be proud of rather than a whiff of Big Brother?