Accessibility links
Political Scientist: Republicans Most Conservative They've Been In 100 Years : It's All Politics Keith Poole of the University of Georgia, with collaborator Howard Rosenthal of New York University, has spent decades charting the partisan ideological shifts and polarization in Congress from the 18th Century until now to get the view of how the political landscape has changed from 30,000 feet up. What they have found is that the Republican Party is the most conservative it has been a century. 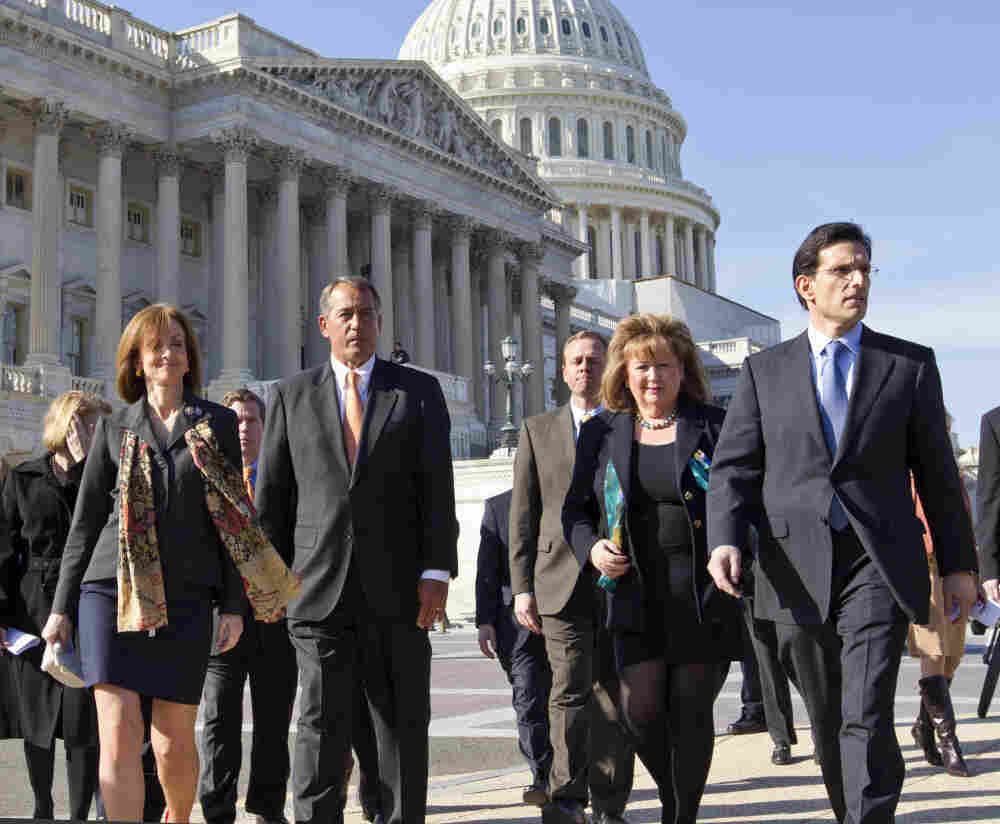 Congressional Republicans have a unique achievement, they are further from the political center than their predecessors of the past century. J. Scott Applewhite/AP hide caption 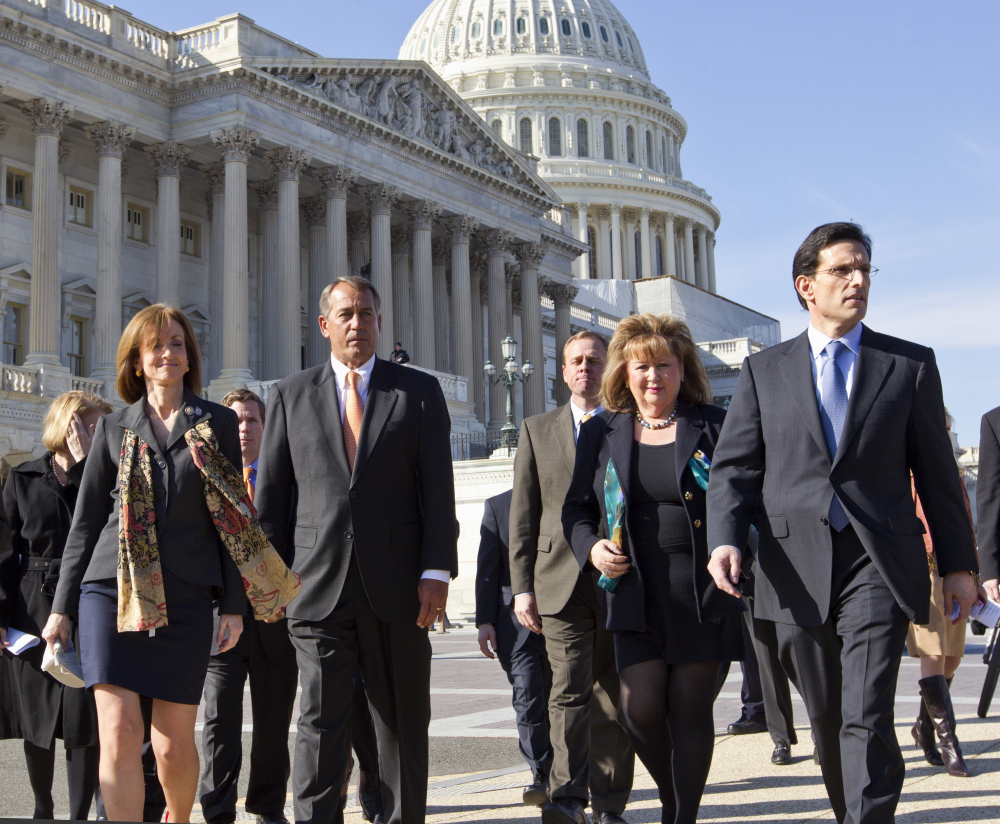 Congressional Republicans have a unique achievement, they are further from the political center than their predecessors of the past century.

When President Obama recently complained to news media executives about their ostensibly even-handed "pox on both of your houses" coverage of the partisan battles in Washington, it might have seemed like, well, a partisan shot from a Democratic president.

After all, his complaint was that the GOP had moved so far right, and intransigently so, that it was wrong to create a false "equivalence" by blaming both parties equally for the Washington gridlock. To a skeptic that comment, coming from a Democrat, sounded suspiciously partisan itself.

But while the president was making the kind of argument you would expect of the nation's top Democrat, he actually had the support of science — well at least political science research that maps that rightward GOP shift.

Keith Poole of the University of Georgia, with his collaborator Howard Rosenthal of New York University, has spent decades charting the ideological shifts and polarization of the political parties in Congress from the 18th century until now to get the view of how the political landscape has changed from 30,000 feet up. What they have found is that the Republican Party is the most conservative it has been a century. 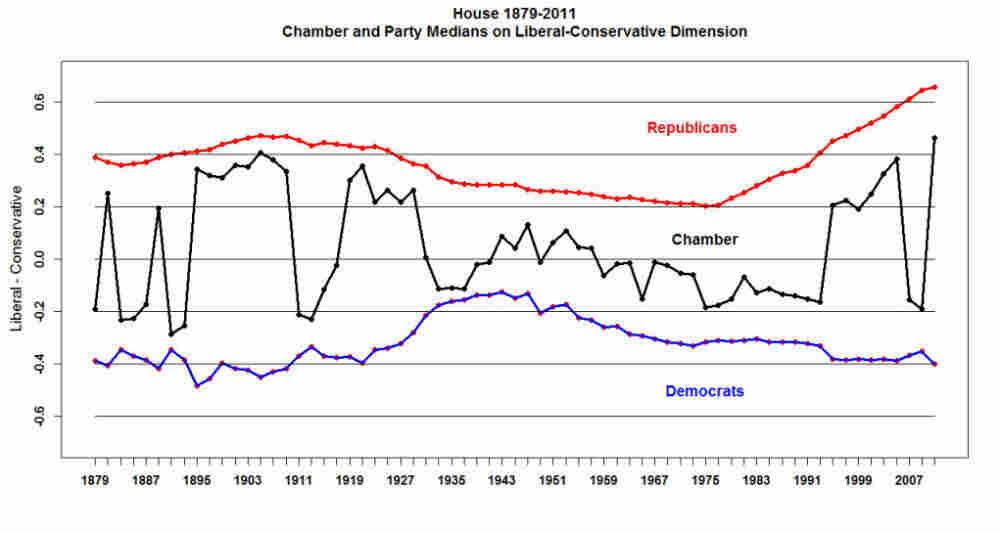 This graph shows the ideological movement for both parties in the House. Note the steady shift towards conservatism among Republicans. voteview.com hide caption 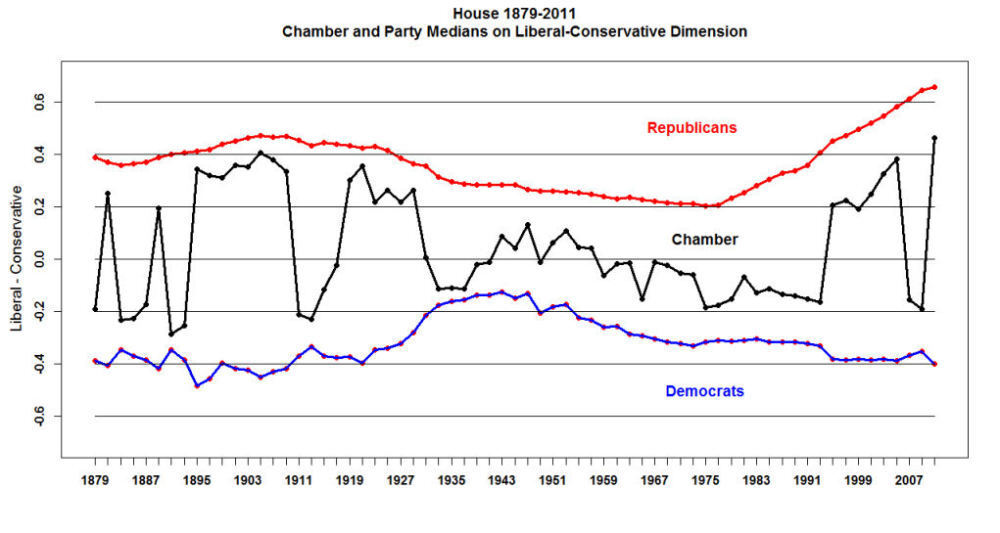 This graph shows the ideological movement for both parties in the House. Note the steady shift towards conservatism among Republicans.

In a recent conversation Poole, who's viewed by other political scientists as the go-to expert on this issue, explained that the data are very clear:

"This is an entirely objective statistical procedure. The graphs just reflect what comes out of the computer. Howard Rosenthal and I, we've been working on something called Nominate. This does all the Congresses simultaneously, which allows you to study change over time.

"The short version would be since the late 1970s starting with the 1976 election in the House the Republican caucus has steadily moved to the right ever since. It's been a little more uneven in the Senate. The Senate caucuses have also moved to the right. Republicans are now furtherest to the right that they've been in 100 years.

Of course some, and not just conservative activists, will be quick to point out that Democrats also have their take-no-prisoner liberals who aren't prone to compromise on their core issues, either.

Karlyn Bowman, a senior fellow at the American Enterprise Institution who studies public opinion, is definitely of the pox-on-both-house camp:

Poole acknowledges that Democrats have contributed their share to the polarization of the political process, especially, he says, through their use of identity politics, appeals to race, ethnicity and gender.

Democrats have also contributed by losing House and Senate seats in the South where moderate Democrats have been replaced by Republicans. Meanwhile, moderate Republicans have continued to depart the scene, with Sen. Olympia Snowe of Maine being just the latest.

Buttressing a point that Obama has sometimes made, this loss of moderates and further rightward movement by congressional Republicans would have been a challenge to navigate for even the biggest conservative hero of modern times, President Ronald Reagan. Poole said:

"Ronald Reagan was so successful because he made all these deals with these huge blocks of moderate legislators. That's why he had overwhelming majorities for the 81 tax cut, the 82 tax increase, where they had to go back and adjust the tax bill in 82 and the Social Security fix in 83. Then in 86 you had Simpson Mazzoli, which included amnesty and tax simplification. All that stuff passed with very large majorities. You cannot imagine anything like that happening now. Which is why the country is really in the tank.

"There's a lot of blame to go around. It doesn't look like there's any resolution of this anytime soon."

That said, Poole says the data are hard to deny; the polarization is largely due to how far and relatively quickly Republicans have shifted to the right end of the ideological spectrum. And he faults leaders of both parties for allowing the nation to get into a fiscal morass in which government spending on health care is unsustainable:

"It is true that the Republicans have moved further to the right than the Democrats have moved to the left. That's absolutely true.

"On the other hand, there doesn't seem to be much impetus on the part of the leadership of either political party to really do something serious about our budget crisis. I doubt very seriously we'll see much improvement.

"People forget how utterly irresponsible our political leadership has been for the last 30 years. ... The current political class of the U.S. just isn't in the same league as Truman and Eisenhower and Adlai Stevenson. You just don't have that kind of leadership now, just when we need it.

This isn't meant as a knock on Obama, Poole said. But he's not very optimistic about what an Obama second term would bring:

"The likely outcome of the election is that it's a very close victory by President Obama, the Republicans hold the House and may come within an eyelash of taking the Senate. I could see a 50-50 Senate. So good luck. After $2 billion gets spent on federal elections at all levels, how bitter will the atmosphere will be in January 2013? We're really up the creek."