Accessibility links
Other Options Gone, Tea Party Members Warm Up To Romney : It's All Politics At a Tea Party gathering in Philadelphia on Monday night, many in the crowd were only recent converts to Mitt Romney's campaign. Some said a solid Tea Party vice presidential choice would generate real enthusiasm for Romney's cause. 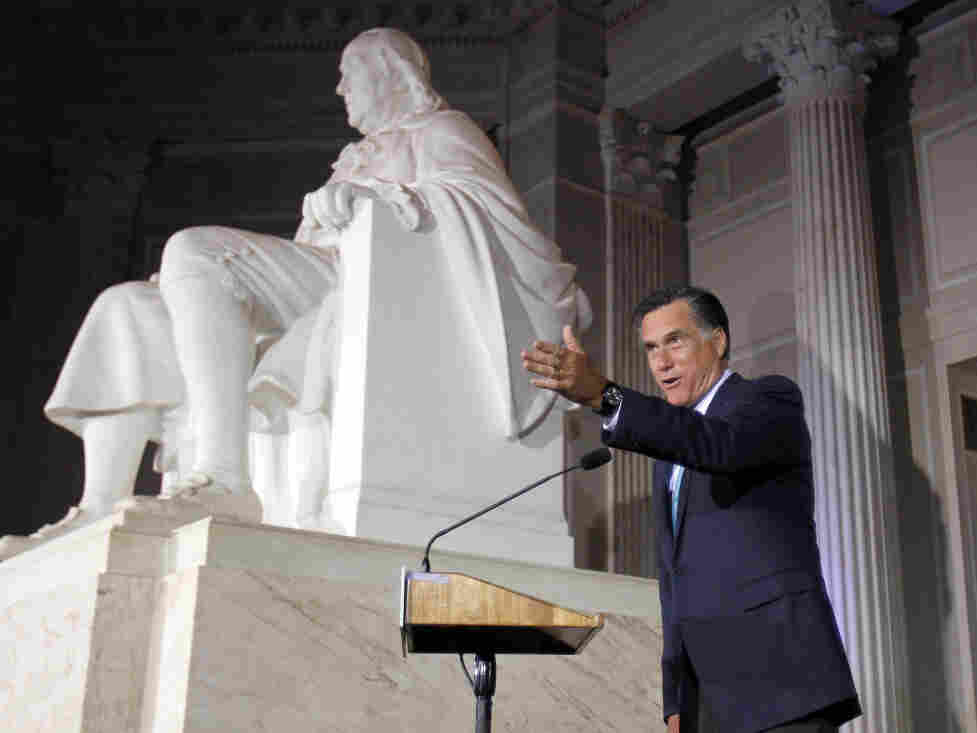 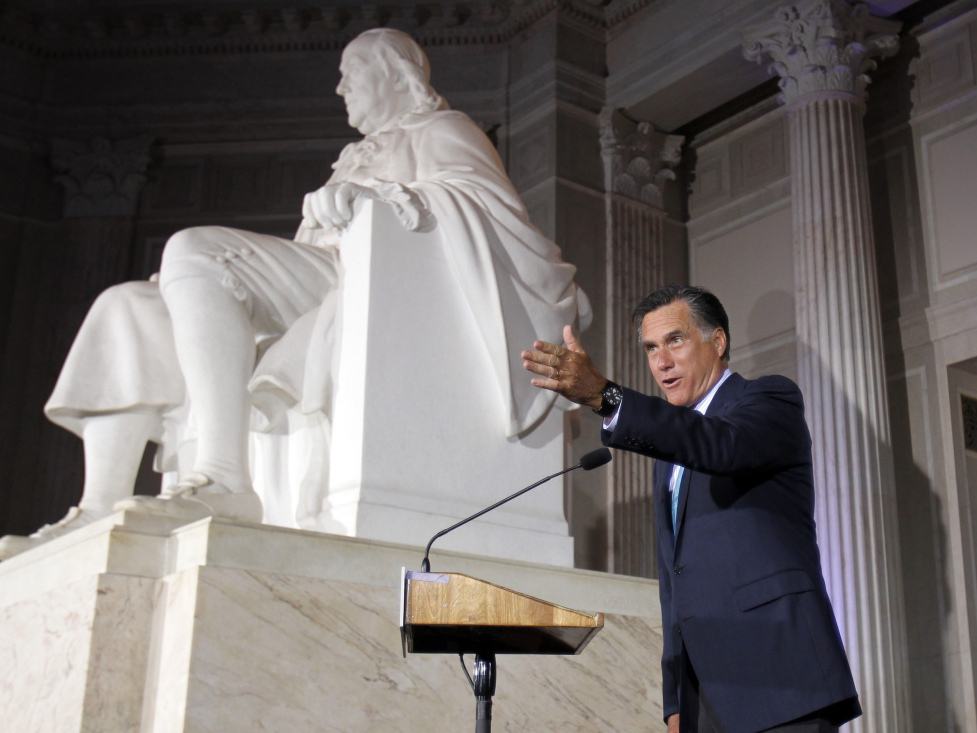 Courting Tea Party voters in Philadelphia on Monday night, Mitt Romney speaks next to a large statue of Benjamin Franklin at the Franklin Institute.

Likely GOP presidential nominee Mitt Romney is reaching out to a segment of the Republican base that has given him trouble in this year's primary season: the Tea Party. On Monday night in Philadelphia, he spoke to activists from Pennsylvania, New Jersey and Delaware, and what might have been a tough crowd turned out to be just the opposite.

The event in the stately rotunda of the Franklin Institute in downtown Philadelphia was more formal than you often get at a Tea Party gathering. The crowd featured more blue blazers than American-flag shirts. And the usual grumbling about Romney's conservative credentials was noticeably absent.

Teri Adams, the president of the Independence Hall Tea Party Association set a welcoming tone. And a giant statue of Benjamin Franklin towered over the proceedings.

Romney immediately struck a favorite Tea Party theme by talking about the nation's Founding Fathers. His speech was full of references to liberty and freedom.

And he ended by saying the campaign is going to be fun — and by asking for Tea Party help in defeating Obama.

There were a lot of people in the audience who are only recent converts to the Romney cause. Meg Shaffer, who sat in the front row, works in management and says just a few months ago she couldn't imagine voting for Romney; she was a Herman Cain fan. Now she says she's more than ready to vote for the man she calls the nominee.

"He mussed his hair a little bit, and he came down to earth a little bit. My only concern I have is that I want to make sure that he relates to the middle-class individual," she said.

Jim Zenkowich, a letter carrier with the Postal Service, is a former Michele Bachmann supporter. Then he liked Rick Santorum. Now he says he's comfortable with Romney and is not worried that the candidate will suddenly shift to the center politically for the general election.

Still, it's an open question how hard the Tea Party will actually work for Romney. That will depend on one thing, says New Jersey Tea Party member Bill Miller. "At this point, the only thing he can possibly do is who he picks for V.P., who's going to be his people that he's going to work with going forward," he says.

Miller says a solid Tea Party conservative on the ticket would generate some real enthusiasm to go along with what is right now the promise of Tea Party votes.