Accessibility links
Coloring In Electoral Map Until You're Blue (Or Red) In The Face : It's All Politics National polls show a close race for the popular vote between President Obama and Mitt Romney, but you may find it more enlightening to look at the larger, more complex puzzle that is the Electoral College map. The state-by-state landscape is distinctly more uphill for the challenger. 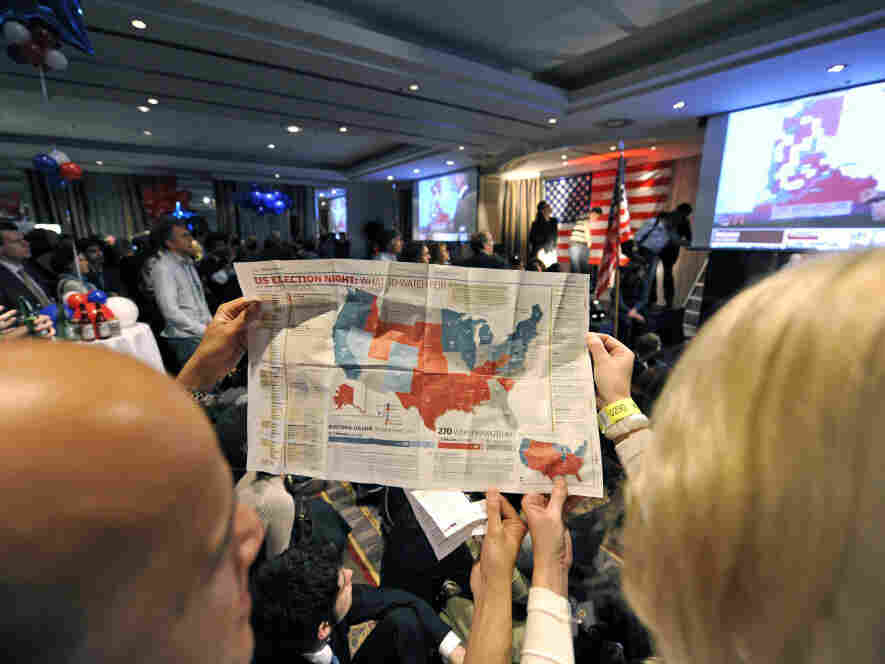 Onlookers study a map of the electoral college system during a Nov. 5, 2008, U.S. presidential election party in Brussels. This year, the electoral vote landscape could be more challenging for Mitt Romney than national popular vote polls might suggest. Jock Fistick/Bloomberg via Getty Images hide caption 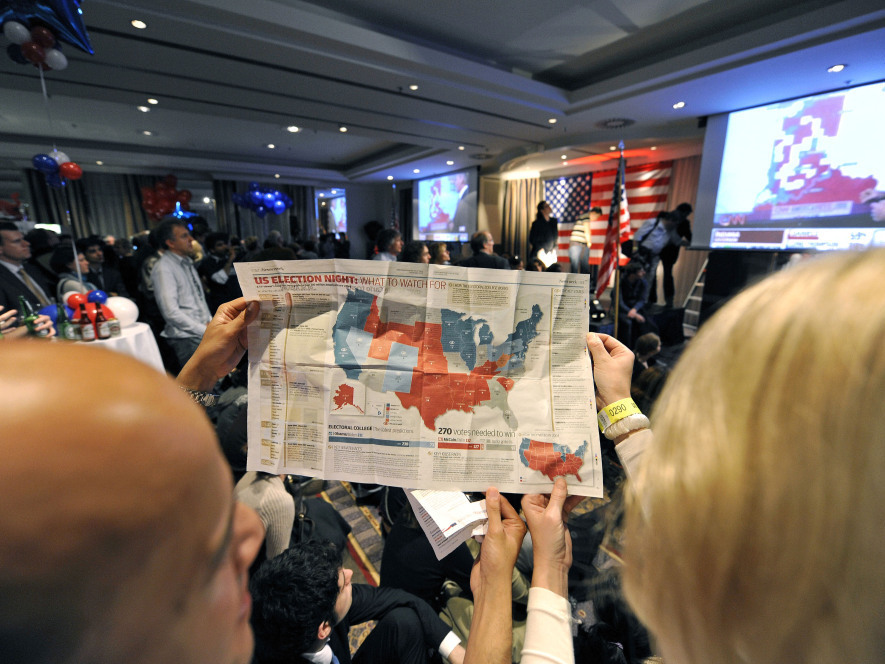 Onlookers study a map of the electoral college system during a Nov. 5, 2008, U.S. presidential election party in Brussels. This year, the electoral vote landscape could be more challenging for Mitt Romney than national popular vote polls might suggest.

Most of us Americans find it hard to watch any sort of a competition without a scoreboard. And when the prize is the White House, the desire to know who's winning gets overwhelming.

That's why, now that Mitt Romney has all but wrapped up the Republican nomination for president, nearly every day brings a new national poll predicting the popular vote results in November.

Or purporting to do so.

Right now, the cumulative average of all such polls gives an edge to the incumbent, President Obama. But it is so small as to be within that margin of error pollsters warn us about. In terms of statistics, even the polls that seem to show a little wider gap between the two (or that show Romney a bit ahead) are basically reporting the same general results. The race is simply too close to call.

That is true, notwithstanding the great flourish of trumpets that greets each new poll — or the breathless way the numbers are repeated on cable TV.

When you've had enough of the popular vote score and its microshifts, you may find it more enlightening to look at the larger, more complex puzzle that is the Electoral College map. There is no shortage of examples on websites that will let you point, click and turn the various states from red to blue and back.

Stack up the states likely to go for each candidate based on past voting and current statewide polling. You will soon see a landscape that is distinctly more uphill for the challenger than the national popular vote polls would suggest.

RCP is a nonpartisan aggregator and curator of political data with a strong emphasis on cumulative polling data. (The "RCP Average" has become like the Dow Jones industrial average for political junkies.)

Right now, RCP has 18 states plus the District of Columbia likely to vote for Obama or leaning to him. It also lists 21 states as likely or leaning for Romney. The problem for Romney is that his states are worth only 170 electoral votes, while Obama's are worth 227.

Still up for grabs are 141 electoral votes in 11 states that RCP (and most everyone else) considers tossups. If Obama holds his current base and gets just 43 of the tossup 141, he will reach the magic number of 270 that will mean four more years in office.

Obama could get there by winning Florida a second time and adding either Ohio or Pennsylvania. If the president carries Florida, any number of combinations would make him the national winner.

That sounds like a tall order. But it's doable if you start with Romney carrying all the states John McCain carried in 2008, including Arizona and Missouri (which RCP considers tossups). The "McCain base" states are now worth 180 electoral votes, a slight upgrade from 2008 thanks to the 2010 census and the reapportionment of 2011.

The fate of the November outcome will rise and fall with the polls in these ultra-battleground states. That's why the Obama team seems more confident than you might expect. They are leading Romney by at least a handful of points in all the ultra-battlegrounds but Indiana and North Carolina.

Other scenarios are possible. Other map elements could break loose in the months ahead. The Obama camp still insists it can carry Arizona and even compete in Georgia. The Romney forces are far from conceding Pennsylvania or the Midwestern states of Michigan, Wisconsin, Minnesota and Iowa.

And when you do the math for either candidate, one familiar fact emerges: Florida is the fulcrum. It was the difference in 2000 and 2004 for Bush. It was the jewel of Obama's victory in 2008. This year, its jump up to 29 electoral votes makes it equal to New York.

It would be too much to say the election comes down to one state. But winning Florida is the key to tilting the Electoral College scales.

Want to try your hand at painting the country red and blue? Put in your predictions using AP's Road To 270 map. 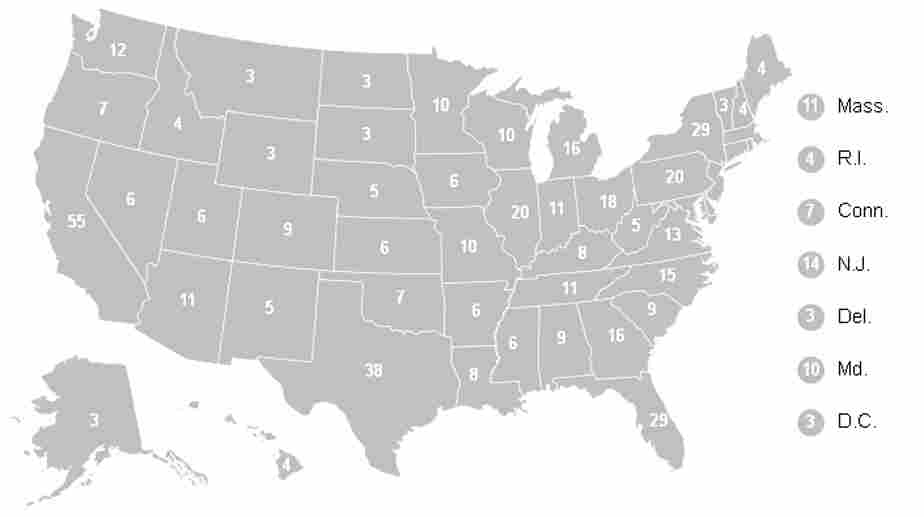