Accessibility links
That New Friend You Made On Facebook? He Might Be Named Mitt Or Barack : It's All Politics So far this campaign, President Obama has spent six times as much on online ads as on TV. Republicans, meanwhile, have unveiled a key to their online strategy: a new Facebook app. 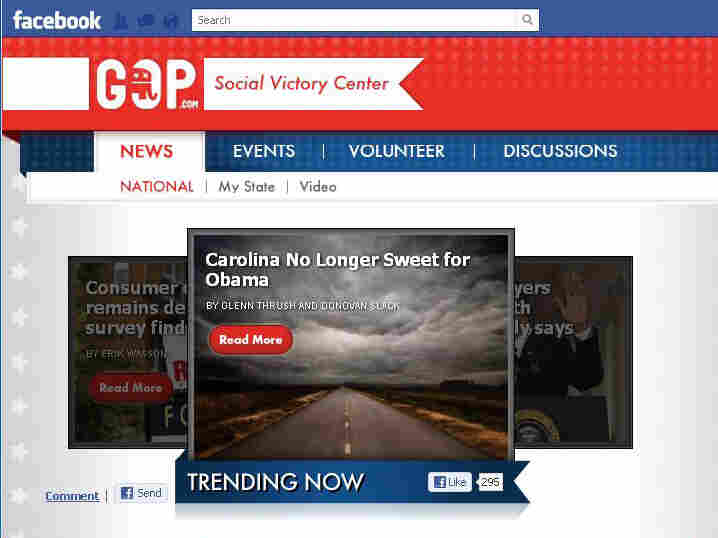 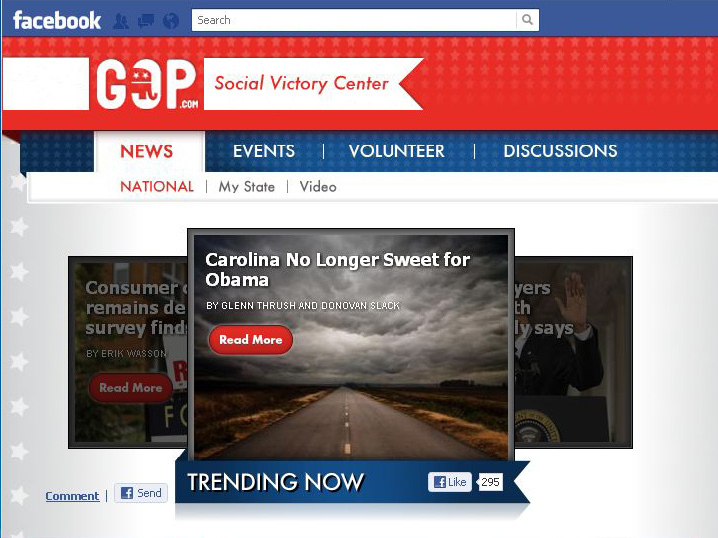 As the presidential campaigns refocus on November, they're zeroing in on digital domains. In fact, the Obama campaign has spent six times as much money advertising online as it has on TV so far, though that's certain to change.

And Republicans are fighting back with a new Facebook app called the "Social Victory Center." (You have to be a Facebook user to access the site.)

"Politics is inherently social. You know, we have a strategy and a way to win, so it made a lot of sense for us to go to Facebook and not build this on GOP.com or a website or something like that, especially with Facebook's platform, which is all about sharing," says Andrew Abdel-Malik, who is a part of the Republican National Committee's digital team.

The app allows users to read articles selected by the GOP, watch videos and download materials. It also lets users in nonswing states, say California, help out by calling potential voters in places that will be highly contested, like Ohio.

Equally important for Republicans, users are sharing data with the party: their names, addresses, phone numbers and interests, says Abdel-Malik.

"Every article, every video, everything is tagged. ... Whether it's an economy article or debt, so on and so forth. ... Whatever it might be, we can collect those data points. And that's where things really start to get interesting," he says.

The Obama campaign set the template for online engagement with voters four years ago, with its MyBarackObama app. Republicans are playing catchup, says Micah Sifry of the Personal Democracy Forum. Sifry edits a blog on how politicians use the Web. He says campaigns on both sides are tapping into a wealth of personal data and raising privacy concerns.

"If you sign up to use one of these campaign apps on Facebook, you're given a little warning that says this app is now going to find out everything that you've made public about yourself on Facebook, as well as the names and IDs of all your friends," says Sifry.

Patrick Ruffini, president of the Republican online consulting firm Engage, says the Republican National Committee is smart to use a Facebook app to reach out to voters.

"We've long known that the most powerful thing in determining how you'll be influenced to vote is a recommendation from a friend," Ruffini says. "And the ability to see in your Facebook news stream somebody taking action on behalf of a campaign who's a trusted connection of yours is something that everybody who's going to be active this year is going to want to look to harness."

The campaigns are very interested in where we go online, whether it's Facebook or a news site. And if you've ever wondered how campaign banner ads seem to pop up on every site you visit, blame one of those little data markers in your browser, the cookie. Visit a campaign website, Sifry says, and you get a cookie, which gets shared with other websites you visit.

"The cookie that they've placed on your site from visiting their website is telling those other websites, 'Hey, this is a person who visited the Barack Obama website; let's show them one of those Obama ads,' " says Sifry.

Sifry says there is a danger of a backlash, that voters might feel they're being stalked by a campaign.

Nevertheless, the Obama campaign has spent almost $19 million for online advertising already, compared with a little more than $3 million on TV ads.

One reason the Obama campaign is spending so much on the Web now is to rekindle the online relationships it had four years ago with the 13 million or so email addresses it collected. At the same time, Romney has had to concentrate on winning primaries.

But as Sifry points out, great tools don't elect candidates; you still need a great candidate with a great message. Still, in a close race, using data gathered online to turn out a few more of your voters could make the difference.