Accessibility links
Voters Tuesday To Decide Lugar's Fate, Walker's Wisconsin Recall Opponent : It's All Politics Voters in Indiana, Wisconsin and North Carolina on Tuesday will decide the outcome of battles many see as proxy wars going into the fall elections. Indiana Republicans will determine the fate of six-term Sen. Richard Lugar, 80, a respected legislator who has run afoul of Tea Party activists. 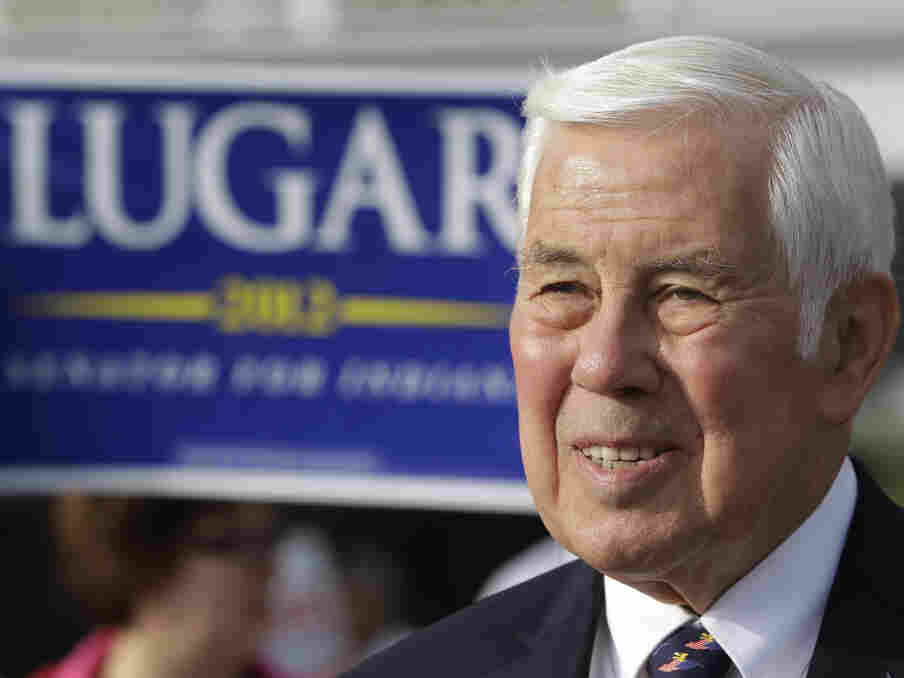 Sen. Richard Lugar, R-Ind., meets with voters Tuesday outside of a polling place in Greenwood, Ind. Lugar is being challenged in the Republican primary by Indiana Treasurer Richard Mourdock. Darron Cummings/AP hide caption 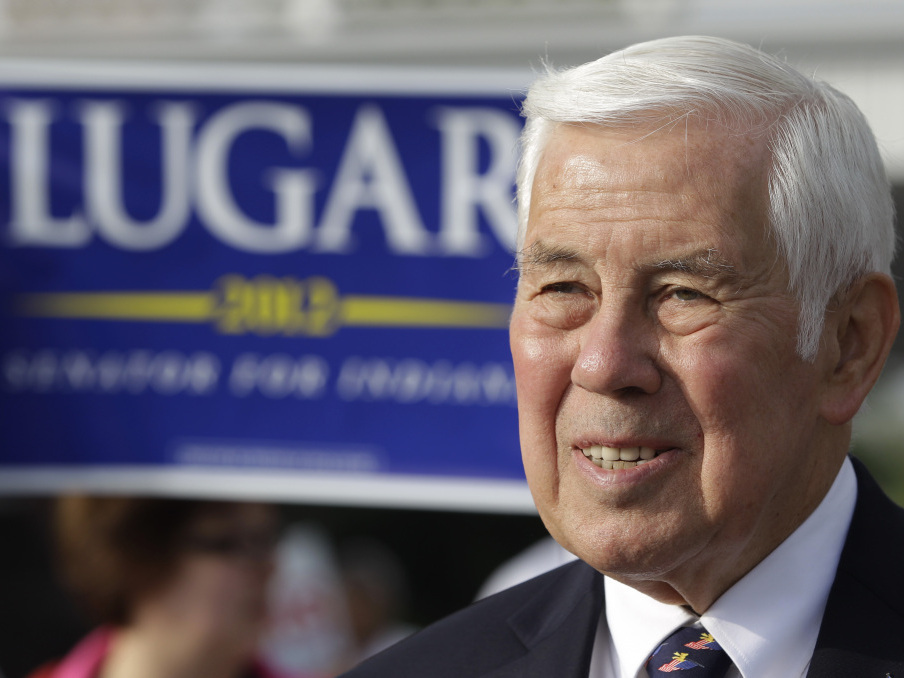 Sen. Richard Lugar, R-Ind., meets with voters Tuesday outside of a polling place in Greenwood, Ind. Lugar is being challenged in the Republican primary by Indiana Treasurer Richard Mourdock.

Voters in Indiana, Wisconsin and North Carolina on Tuesday will decide the outcome of battles many see as proxy wars going into the fall elections.

-- In Indiana, voters will determine the fate of six-term Republican Sen. Richard Lugar, 80, a respected legislator who has run afoul of Tea Party activists.

-- In Wisconsin, they'll pick a Democrat from a field of four whose aim it will be to oust anti-union Republican Gov. Scott Walker in a June recall election prompted by his slashing of collective bargaining rights.

-- And in North Carolina, an important presidential swing state, they'll decide whether to enshrine in the state's constitution a ban on same-sex marriage, as well as on civil unions or any domestic legal arrangement.

Republicans in three states — Indiana, North Carolina and West Virginia (Wisconsin held its presidential primary last month) — also get to add their votes Tuesday to the all-but-inevitable nomination of Mitt Romney for president.

But while the outcome of the GOP presidential nominating contests have lost their suspense with the departure of all major competition for Romney, other battles in the states could influence the November general election.

Here's a look at Tuesday's most significant contest:

Lugar is a moderate hero to his supporters, able to work across the aisle to get the nation's important business done and respected internationally for his devotion to mitigating global nuclear and biological threats.

"We need thoughtful, effective leaders like Dick Lugar in the United States Senate," said former Democratic Sen. Sam Nunn of Georgia, who for two decades in and out of Congress has worked with Lugar to help Russia to dismantle its nuclear arsenal.

To his detractors, Lugar is a Washington/Chamber of Commerce insider, too friendly with President Obama and too business-cozy to take on entrenched interests and embrace the Tea Party's free-market ideals.

"Why does the Republican establishment continue to support liberal Republicans who don't advance conservative policy ideas?" said Barney Keller of the free-market Club for Growth, which targeted Lugar early for his support of the auto industry bailout, for example, and the 2008 stimulus bill.

Mourdock, a Tea Party favorite, has benefited from an infusion of money from the Club for Growth, and from Lugar's haphazard campaign that not only failed to quell critics who derided him for not maintaining a home in Indiana since 1977, but also undermined his well-earned reputation as a steady, statesmanlike force.

"Dick is smart, strategic, diplomatic and wise," Nunn said in a statement, "and a great asset for Indiana and America in the U.S. Senate."

Voters Tuesday, however, were poised to deny Lugar, an Eagle Scout and ranking member (and former chairman) of the Senate Foreign Relations Committee, a chance for another six years in Washington.

There isn't much "Wisconsin Nice" left these days; it all seemed to evaporate once residents took sides in the incendiary war over Republican Gov. Scott Walker's successful effort last year to strip state and local unions of most of their bargaining rights.

But the Democratic gubernatorial primary campaign has been marked by a determined niceness on the part of the four contenders. "Don't eat your own" was the inside-the-party message, and one shared by the unions, in their quest to take down Walker.

Recent polls show that Wisconsin Democrats are expected to pick Milwaukee Mayor Tom Barrett to take on Walker in next month's recall election. It would be a rematch: The two men faced off in the 2010 gubernatorial race, which Walker won by 5 percentage points in the GOP landslide year.

The events of last year, including massive demonstrations at the State Capitol, which played out on national television, led to a petition drive that collected more than 900,000 signatures supporting an election to recall Walker. Money has been pouring into the state since, in a battle that marks an important flex point in the history of America's unions.

The Friends of Scott Walker PAC has already raised more than $25 million; Barrett for Wisconsin has pulled in more than $831,000, a number that's expected to rise quickly if he wins Tuesday.

Labor experts and historians see Wisconsin as one part of a strategy to undermine unions in the industrial, heavily unionized Midwest, from Indiana with its anti-union right-to-work law, to Ohio, where voters overwhelmingly repealed a state law that would have stripped public union bargaining.

It's important, said John Russo of Youngstown State University, to view Wisconsin in the context of what's happening in other states before assigning too much importance to the outcome of the recall.

"These states are all very different," said Russo, coordinator of the Labor Studies Program at YSU. "But the outcome next month will say a lot about the momentum that's being built, and will shape Democratic policies over the five months before the presidential election."

Partisans on both sides of the aisle have been opining on how the expected passage Tuesday of a same-sex marriage constitutional amendment would affect the November presidential contest in this battleground state.

Pollster Tom Jensen of North Carolina-based Public Policy Polling has an answer, a paraphrase of sorts of the "What happens in Vegas, stays in Vegas" saying.

"What happens Tuesday doesn't matter much after Tuesday," Jensen said, even though former President Bill Clinton has weighed in against the amendment, and the Rev. Billy Graham has endorsed it. Heavy early voting suggests that the issue has brought out Democrats and Republicans in pretty even numbers, and "both party bases are being about equally engaged," Jensen said.

What's usual, however, is that on this issue there is an alliance of Republican voters and African-Americans, he said, with a strong majority of both planning to vote for the amendment. "There are not a lot of times you see those two voting together," he said, and come November, 95 percent of African-Americans will be voting for Obama, and a similar percentage of Republicans will not.

North Carolina, where Democrats have about a 13 percentage point voter registration advantage, has been and will remain a tossup between Romney and Obama, Jensen predicted, as it has been in 17 out of the past 18 months that PPP — a Democratic-based firm — has surveyed the state.

PPP's polls also show that many likely voters don't know that the amendment proposed in North Carolina, which already has a state law barring gay marriage, bans not only same-sex marriage but also civil unions. Man-woman marriage "is the only domestic legal union that shall be valid or recognized by this state," the amendment reads.

"It has implications far beyond banning gay marriage," says Jensen, who predicts that the amendment will pass with just under 60 percent of those voting in favor.

The vote comes in the days following Vice President Joe Biden's stated support for same-sex marriage. The White House, following Biden's comments on NBC's Meet the Press on Sunday, attempted to characterize the moment of honesty as within the parameters of the president's own views.

Obama has characterized his stand on same-sex marriage as "evolving," and he supports civil unions for gay couples.