Accessibility links
How A College Kid May Have Helped Pick A Congressman : It's All Politics Insurgent candidates won contested congressional GOP primaries in two states Tuesday. In a Kentucky district, the favorite for the fall prevailed thanks to some assistance from a wealthy 21-year-old benefactor.

How A College Kid May Have Helped Pick A Congressman

How A College Kid May Have Helped Pick A Congressman

Thomas Massie won't be sworn in as a member of Congress until next January, but he has already put one of his supporters at the top of his Christmas card list.

Massie won the Republican nomination in Kentucky's 4th Congressional District, just south of Cincinnati, on Tuesday in large part due to the backing of James Ramsey, a 21-year-old college student in Texas. 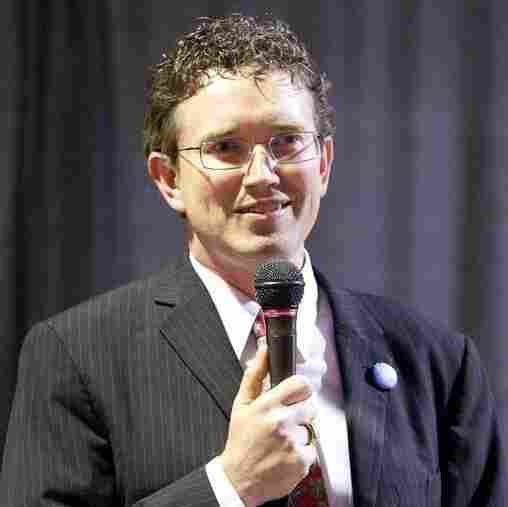 Thomas Massie's opponents were quick to complain that out-of-state money had "stolen" the election for him after he won the GOP nomination in Kentucky's 4th Congressional District. AP hide caption

Ramsey, who inherited a fortune from his grandfather two years ago, provided his Liberty for All superPAC with more than $500,000 to spend on the race, which went toward TV ads and field operations in support of Massie's candidacy.

The district is reliably Republican, so Massie's primary win is tantamount to an eventual victory in November. At a debate last week, Massie said he had never met his young benefactor, but added, "I think he'll probably be getting a Christmas card from me this year."

Massie, a Lewis County official, also received backing from larger superPACs such as the Club for Growth and FreedomWorks, as well as Republican Sen. Rand Paul.

Massie held his cellphone up to a microphone at his victory party Tuesday to amplify Paul's congratulatory call.

But the big infusion of cash from Ramsey — a supporter of Texas Rep. Ron Paul, the Kentucky senator's father and a libertarian-leaning GOP presidential candidate — helped Massie cruise to an easy victory over a crowded field that included two candidates who had enjoyed the backing of more establishment party figures.

Massie's opponents were quick to complain that out-of-state money had "stolen" the election for him. That characterization isn't fair to Massie or the quality of his candidacy, says Trey Grayson, a former Kentucky secretary of state who lost the GOP Senate nomination to Rand Paul two years ago.

But the fact that Ramsey's superPAC outspent the leading candidates by a roughly 2-to-1 margin could have national implications, Grayson says.

"It shows the role you can play in congressional districts, where you don't have to have that much money," says Grayson, who directs the Harvard University Institute of Politics. "Essentially one person, a college kid who inherited a lot of money, created a superPAC that swung the race dramatically in Massie's direction."

In another closely watched GOP primary Tuesday, Tom Cotton won the nomination in Arkansas's southern 4th Congressional District, the last one in the state held by a Democrat. Cotton had started out as a lesser-known challenger against Beth Anne Rankin, a former Miss Arkansas and aide to former Republican Gov. Mike Huckabee, who had been the party nominee in the district two years ago.

"He's very closely tied to the national party and the national interest groups," Bass says. "Rankin's was much more the kind of friends-and-neighbors approach that Republicans have used as the minority party in the state."

At this point, the presidential nominating races may be all but done — although Obama suffered poor showings in both states Tuesday, losing 42 percent of the Kentucky vote to "uncommitted" and more than 40 percent in Arkansas against an underfunded candidate who hadn't appeared in the state since March.

Mitt Romney, the former Massachusetts governor and presumptive Republican presidential nominee, lost more than 30 percent of the vote in both states.

The real drama leading up to the fall contests, though, will be in congressional races. SuperPACs may play an even more decisive role in lower-tier races than they have so far in the presidential contest. Liberty for All, among others, intends to keep playing in contested primaries around the country.

A number of other college students have started superPACs, largely as pranks or in homage to comedian Stephen Colbert. They don't have anywhere near the kind of money that Ramsey is able to contribute to his superPAC.

Ramsey told The New York Times that between his own money and a fundraising push, he expects his superPAC to have some $10 million to spend over the coming months.

"How much money would you spend for freedom?" Ramsey said.