Accessibility links
Romney Pivots To Education Platform In Seeking Latino Votes : It's All Politics Declaring that a "national emergency" exists in public education, presumptive Republican presidential nominee Mitt Romney shifted from his usual economic message to outline his education platform during a speech to a Latino business group Wednesday. 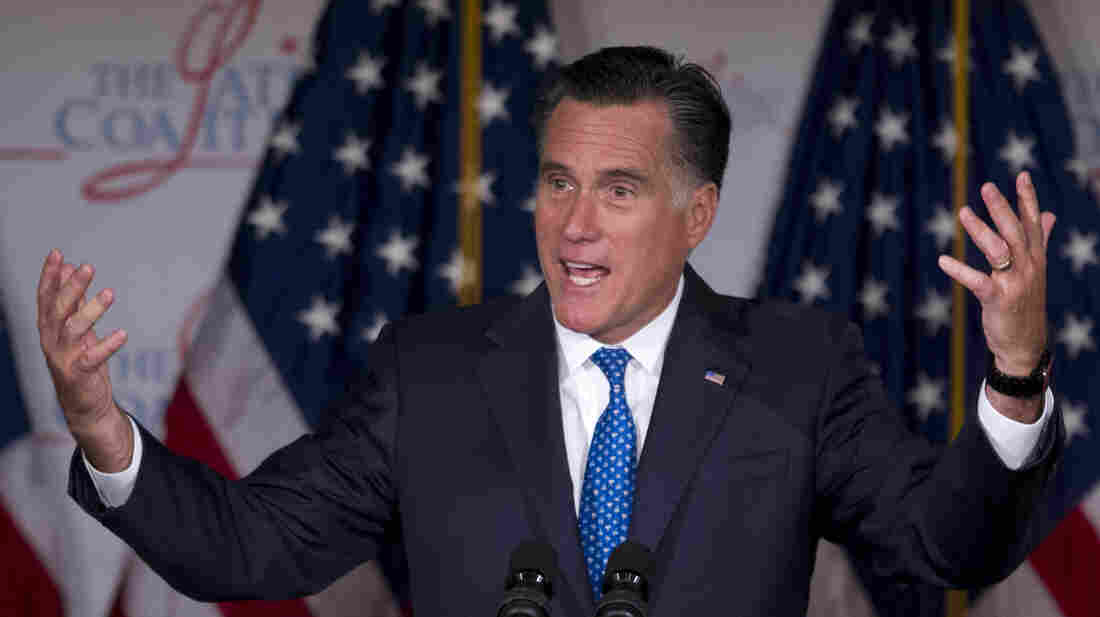 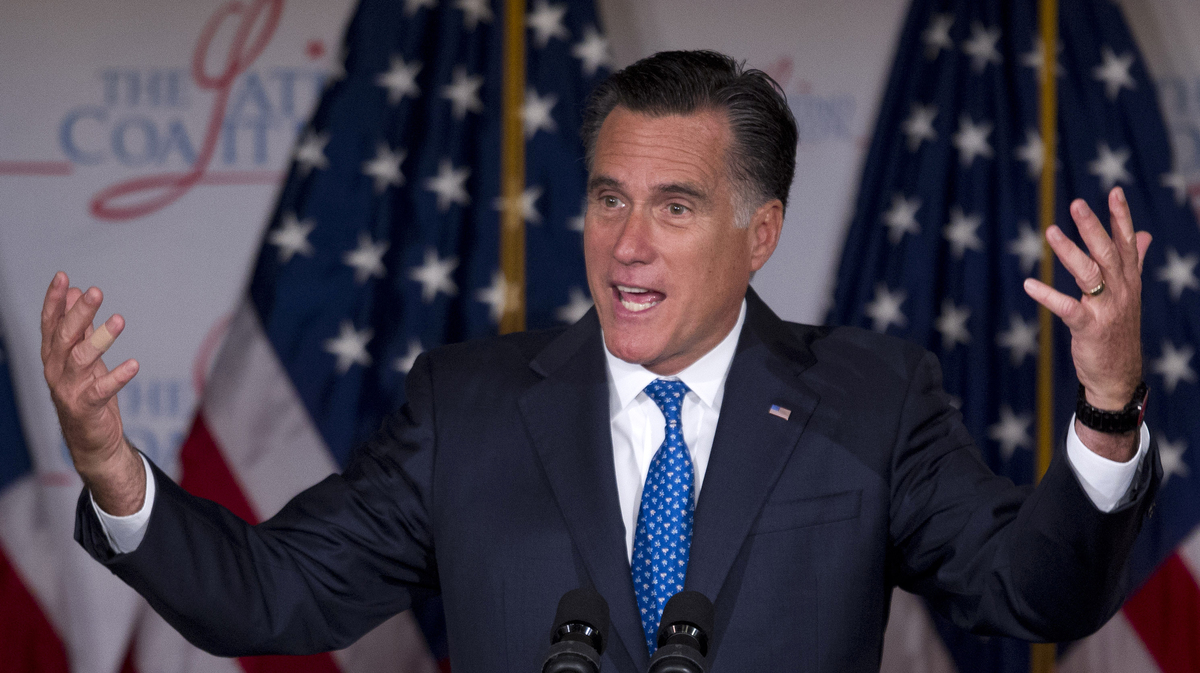 Declaring that a "national emergency" exists in public education, presumptive Republican presidential nominee Mitt Romney shifted from his usual economic message to outline his education platform during a speech to a Latino business group Wednesday.

Romney pledged to provide federal funding for "every" child from low-income families, or those with special needs, to attend the public, public charter or, in some cases, private school of their parents' choice. The proposals are boilerplate Republican Party planks.

"Instead of just giving lip service to improving our schools, I will actually put the kids first and the [teachers] union behind in giving our kids better teachers, better options and better choices for a better future," said Romney.

Romney was addressing the annual economic summit of the Latino Coalition, held at the U.S. Chamber of Commerce. After the economy, most Latinos in many polls identify education as their most important issue. Romney's message received a warm reception, particularly when he criticized the Obama administration's education policies.

"This president receives the lion's share of funding from organized labor, and the teachers' unions represent a massive source of funding for the Democratic Party," Romney said. "The challenge with that is when it comes to actual reform to make schools better for our kids, they talk a good game, but they don't do it."

Romney has turned his focus recently to making inroads with Latinos, the nation's largest minority group and fastest-growing group of voters. He's climbing a steep hill.

Romney angered many Latinos with his pledge to veto the Dream Act, if elected. The legislation, which failed in the Senate last year, would create a path to citizenship for young adults brought to America as children if they attend college or serve in the military. Romney also has called Arizona's strict immigration enforcement law — which has been appealed to the U.S. Supreme Court — a "model" for the nation.

Conventional political wisdom is that Romney must significantly cut into Obama's support among Latinos to have a chance at victory.

Last week, Romney visited Florida, where Latinos make up 13 percent of registered voters, and released his first television ads of the general election, including a Spanish-language version.

The 30-second spot, "Day One" or "Día Uno," outlines the three actions Romney would take in his first day in office: approve the Keystone XL oil pipeline; cut taxes and enact reforms to help "job creators"; and end "Obamacare."

Except for creating jobs, these promises don't match with Latinos' priorities, polls show. Latinos generally rank the economy and jobs first, followed by education, with immigration overhaul placing third or fourth, depending on the poll. Polls also show that a majority of Latinos favor Obama's health care law.

Ruth Sandoval, a self-employed management consultant who attended the speech, said she was pleased that Romney addressed education, given its importance to Latinos.

"The highest dropout rates are with Hispanics. Unless we have our community educated, we'll have a community on welfare," Sandoval said.

Romney's business background would be "valuable" in the White House, Sandoval said, adding that she's "not concerned" about the Obama campaign's attacks on Romney's record running Bain Capital: "I can't be mad at somebody for making money. That's everybody's dream." She added that no matter which candidate wins, "I think we're in for a long haul" before the economy recovers.