Accessibility links
Romney Seeks Majority, Trump's Birthers Too, But Defies Conventional Wisdom : It's All Politics Visiting with Donald Trump had a certain logic for Mitt Romney when he was fighting to prove his conservative street cred. But the logic is less clear now that Romney is shifting his campaign to gain support among independents. As George Will suggests, the Trump embrace indeed a curious move. 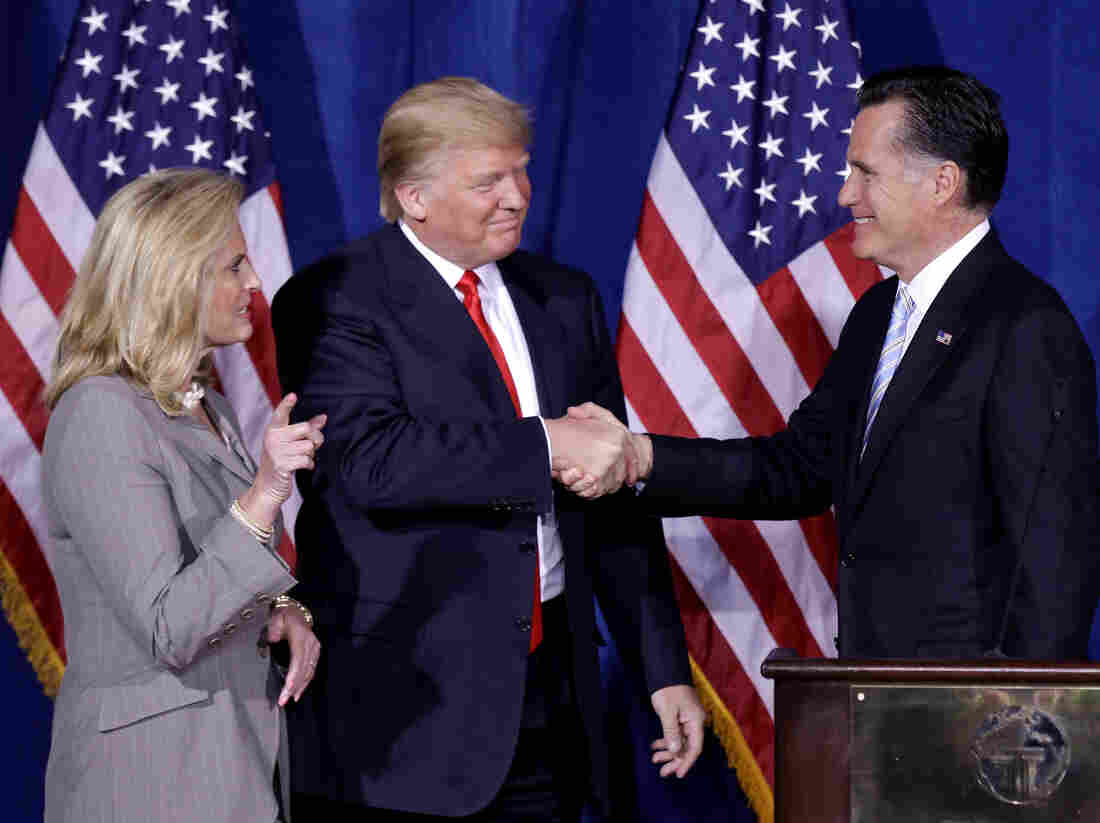 Mitt Romney keeps Donald Trump close at hand even though it's unclear from the outside what he hopes to gain. Julie Jacobson/AP hide caption 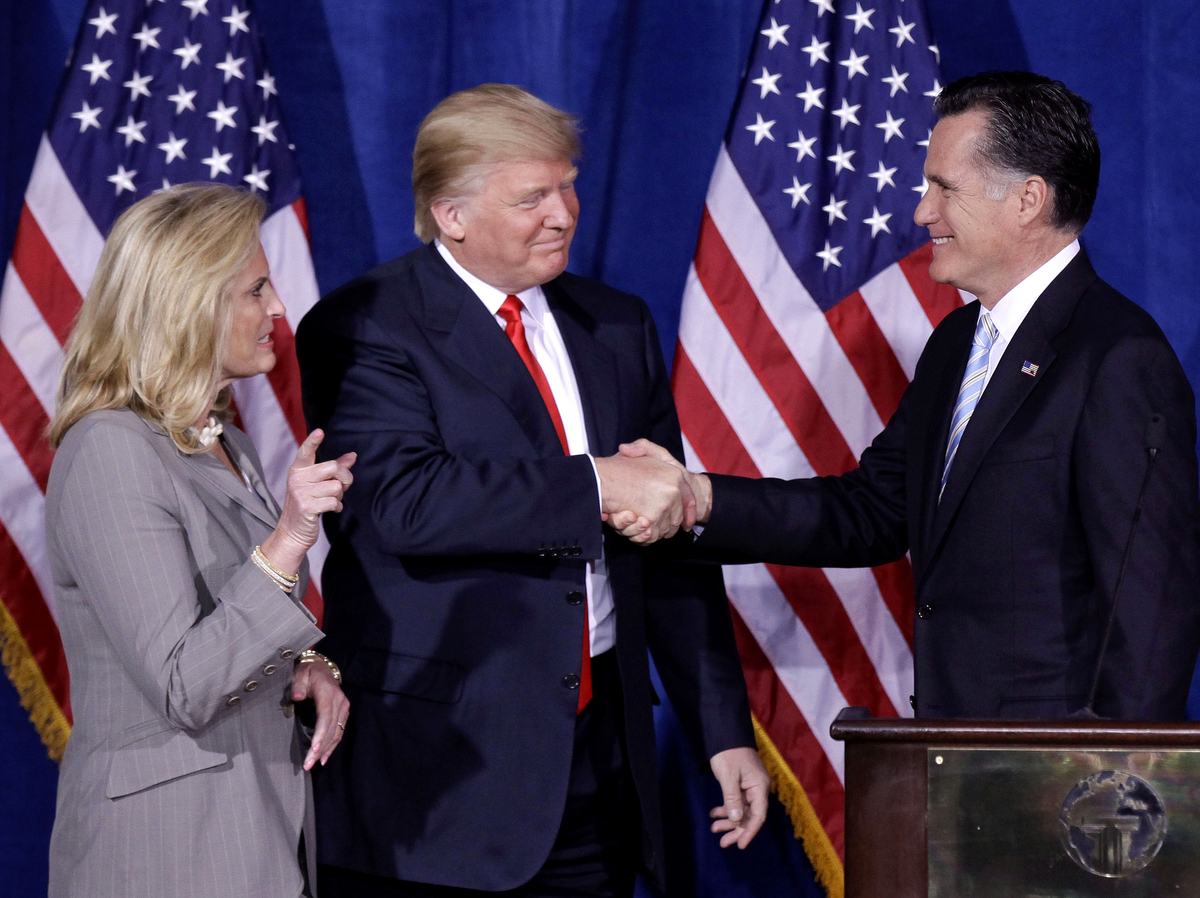 Mitt Romney keeps Donald Trump close at hand even though it's unclear from the outside what he hopes to gain.

Mitt Romney may not have meant to echo another governor from a well-known political family who also once sought the presidency (Adlai Stevenson).

But the Republican presidential candidate this week sure sounded an awful lot like the Democratic Illinois governor who famously twice failed to win the presidency in the 1950s against Dwight D. Eisenhower.

Reporters wanted to know why the former Massachusetts governor didn't distance himself from Donald Trump, the superwealthy developer, TV star and celebrity birther. Not only was Romney not distancing himself from Trump, who continues to question whether President Obama was born in the United States. Romney's spending part of Tuesday evening at a Las Vegas fundraiser hosted by Trump.

"I don't agree with all the people who support me. And my guess is they don't all agree with everything I believe in. But I need to get 50.1 percent or more. And I'm appreciative to have the help of a lot of good people."

Back in 1956, during his second run for the White House, Stevenson was told by a female voter: "You'll have the vote of every thinking person in America." To which the Democratic presidential nominee said:

"Thanks, but I need a majority."

Both Romney and Stevenson acknowledged reality, meaning to become president, you have to get the support of a lot of people you wouldn't want to, say, share a cab to the airport with.

But that bit of realpolitik didn't work out so well for Stevenson, and Democrats are trying to make sure it doesn't work out well for Romney, either.

The Obama campaign put up a new ad taking Romney to task for not confronting the misinformation about Obama being spread by the president's opponents the way Sen. John McCain did when he ran for president in 2008. The ad juxtaposes McCain, as a leader willing to take on the extreme elements of his party, with Romney, who, the Obama campaign charges, isn't.

And the ad didn't even use the footage provided by conservative George Will, who over the weekend called Trump a "bloviating ignoramus." "Bloviate," by the way, is a verb with a strong presidential connection: It was often applied to President Warren G. Harding, who, it was said, had developed to near perfection the ability to talk at length without saying much of anything.

But I digress. Will asked the pertinent question Sunday when he wondered aloud what Romney saw as the upside in attaching himself to Trump when there was clearly so much apparent downside.

"I do not understand the cost-benefit here. The costs are clear. What voter is going to vote for him because he's seen with Donald Trump. The costs of appearing with this bloviating ignoramus is obvious it seems to me... Again, I don't understand the benefit. What is Romney seeking?"

The question is especially apt on the day when Romney will officially get, according to some delegate counts, the last of the 1,144 delegates needed to win the Republican presidential nomination.

Visiting with Trump during the hard-fought primary campaign had a certain logic when Romney was fighting to prove his conservative street cred, even taking positions to the right of other candidates who were perceived as more conservative, such as Texas Gov. Rick Perry and Newt Gingrich, the former House speaker, for instance.

But the logic is less apparent now that Romney is presumably in the process of shifting his campaign more toward the political center to gain support among political independents. As Will suggests, it is indeed a curious move.