Accessibility links
World War II Vet Caught Up In Florida's Voter Purge Controversy : It's All Politics Brooklyn-born Bill Internicola, 91, says he was "flabbergasted" when he got a letter asking him to show proof he was a U.S. citizen or be removed from the voting rolls. Florida is targeting suspected noncitizens, saying it's trying to prevent fraudulent voting. 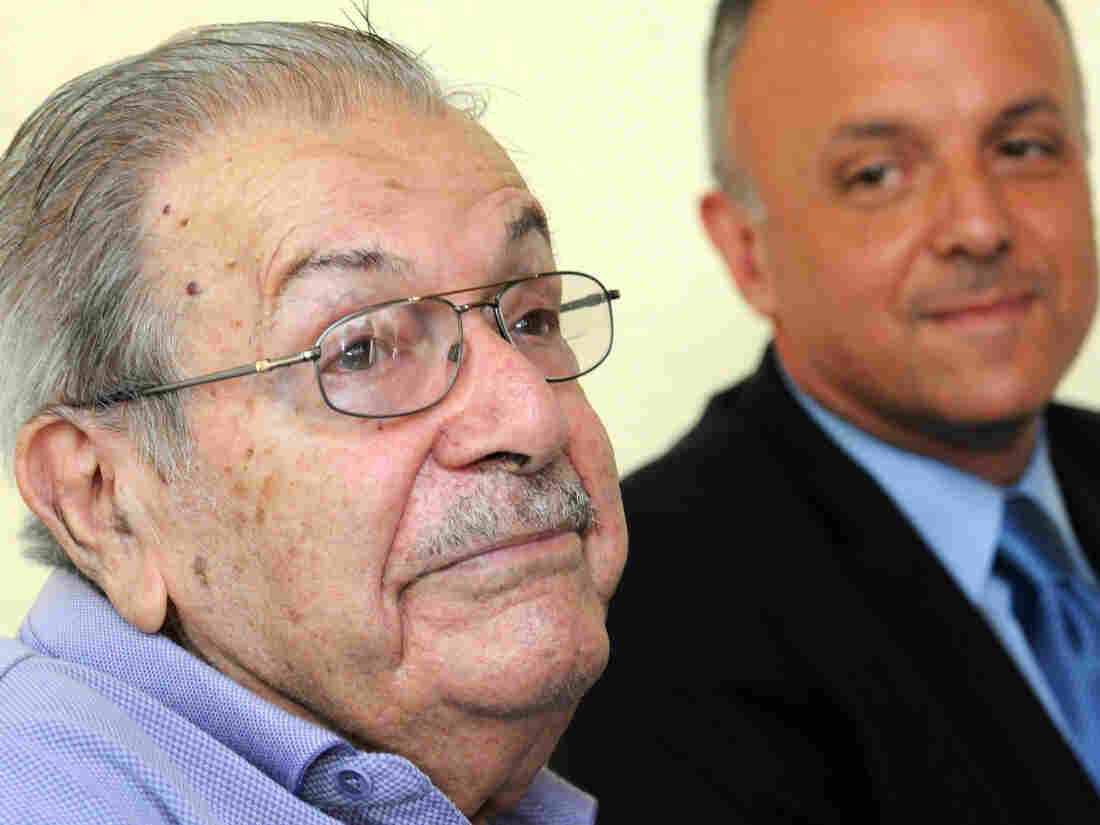 Bill Internicola, a 91-year-old veteran of World War II, was one of the voters targeted by Florida as a potential noncitizen. Internicola was ordered to prove his citizenship or lose the right to vote. He is flanked by U.S. Rep. Ted Deutch, who called on Florida Gov. Rick Scott to stop the purge of voter rolls immediately. Taimy Alvarez/MCT/Landov hide caption 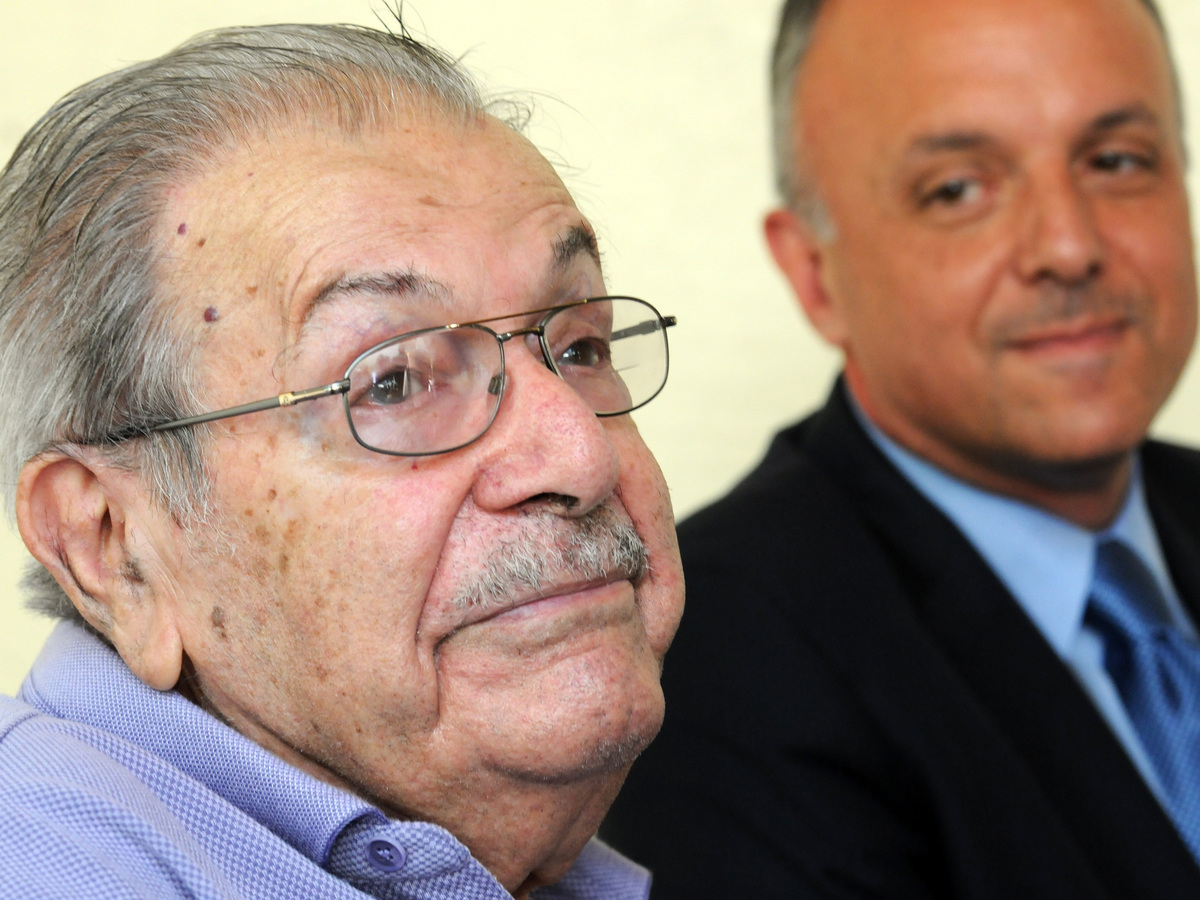 Bill Internicola, a 91-year-old veteran of World War II, was one of the voters targeted by Florida as a potential noncitizen. Internicola was ordered to prove his citizenship or lose the right to vote. He is flanked by U.S. Rep. Ted Deutch, who called on Florida Gov. Rick Scott to stop the purge of voter rolls immediately.

Bill Internicola, a 91-yar-old World War II veteran, was born and raised in Brooklyn, N.Y., and now lives in Florida's Broward County. He recently received a letter from county elections officials asking him to show proof he was a U.S. citizen or be removed from the voting rolls.

Internicola says he was "flabbergasted."

"To me, it's like an insult," he says. "They sent me a form to fill out. And I filled out the form and I sent it back to them with a copy of my discharge paper and a copy of my tour of duty in the ETO, which is the European Theater of Operations."

Internicola's was one of more than 180,000 names Florida's secretary of state identified from motor vehicle records as possible noncitizens. Several weeks ago, the secretary's office sent county elections supervisors a first batch of some 2,600 names. County officials, who are also preparing for the state's August primary, started sending out letters to suspected noncitizens, saying they had 30 days to prove their citizenship or be removed from the voting rolls.

That's when things started to get hot.

"I think most of us know that what this is about is voter suppression," Democratic Rep. Alcee Hastings said this week at a news conference with Internicola.

Rep. Ted Deutch, a Broward County Democrat who called the news conference, and other Democrats in the state's congressional delegation wrote to Florida Gov. Rick Scott, a Republican, asking him to immediately suspend the voter purge.

"Why is this happening less than three months before an election?" Deutch said. "Why is there only a 30-day period for people to be able to respond? It looks like there is an effort to purge a large number of voters from the rolls whether they're eligible voters or not."

Chris Cate, a spokesman for Ken Detzner, the secretary of state, says his office is working to improve the process — spending about $100,000 to update its records. But even with the new list, he concedes it's likely some eligible voters will be mistakenly identified as noncitizens.

"We certainly don't want anybody to be inconvenienced by the process," Cate says. "But we also believe everyone will understand that it's in the best interests of our election process to make sure only eligible voters can cast a ballot."

Democrats and voting-rights groups say the majority of those targeted by the purge are Hispanics and other minority voters. Last week, a coalition of voting-rights groups sent a letter to Detzner asking him to immediately call a halt to the voter purge because they say it's both unfair and illegal.

"It's in violation of the National Voter Registration Act, which prohibits purging voters within 90 days of a federal election," says Penda Hair, co-director of one of the groups, the Advancement Project. "And the reason it prohibits that is because of what's happening here, which is that such purges create chaos. They create intimidation for voters."

The secretary of state's office says it reads the law differently and plans to continue its efforts to remove ineligible voters from the rolls.

On that front, it's begun a new effort. Florida's top elections officials recently sent to the counties a list of 53,000 people believed to be dead who should be removed from the voter rolls.

That's something county elections officials do routinely, using death notices. Susan Bucher, the supervisor of elections for Palm Beach County, says she held off sending letters to people identified as potential noncitizens because she had questions about the state's methodology. With that experience in mind, she's leery about the new list as well.

"In the situation with the deceased persons, we have no evidence — they just told us about it," she says. "So I'd like to see some documentation so that I can do some research to make sure that that's not faulty also."

Many county elections supervisors, both Democrats and Republicans, are angry about the state pressure to purge voters at a time when they're trying to prepare for Florida's August primary.

Democrats say it's a repeat of the 2000 presidential election, when Secretary of State Katherine Harris oversaw a purge of felons that disenfranchised thousands of eligible voters.

And here's a reminder of why disputes in Florida over voter eligibility are so important: That election, you'll recall, was decided by just 537 votes.