Accessibility links
John Edwards Walks, But His Trial Is A Warning To Politicians : It's All Politics At first blush, the trial looks like it might do little to deter politicians from getting money from supporters and, with some sleight of hand, spend it on practically anything. While the verdict was clearly a loss for prosecutors, analysts believe it wasn't a total loss for campaign finance law.

John Edwards Walks, But His Trial Is A Warning To Politicians

John Edwards Walks, But His Trial Is A Warning To Politicians 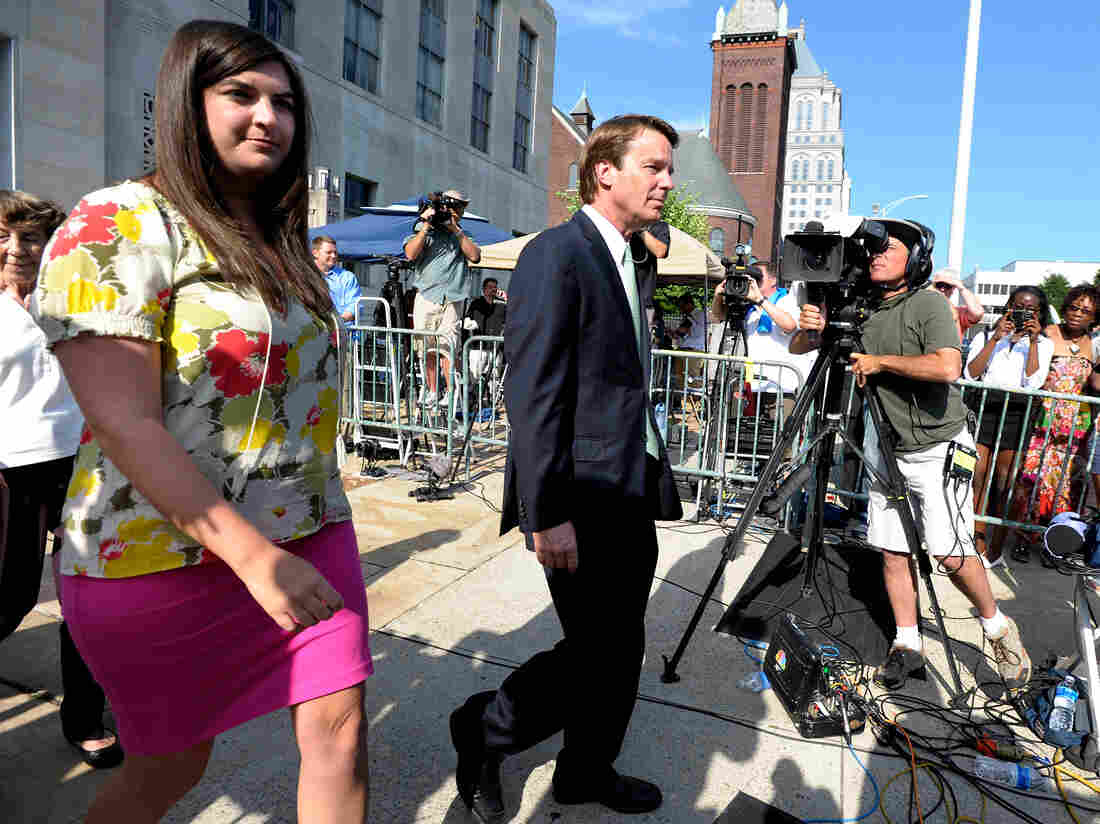 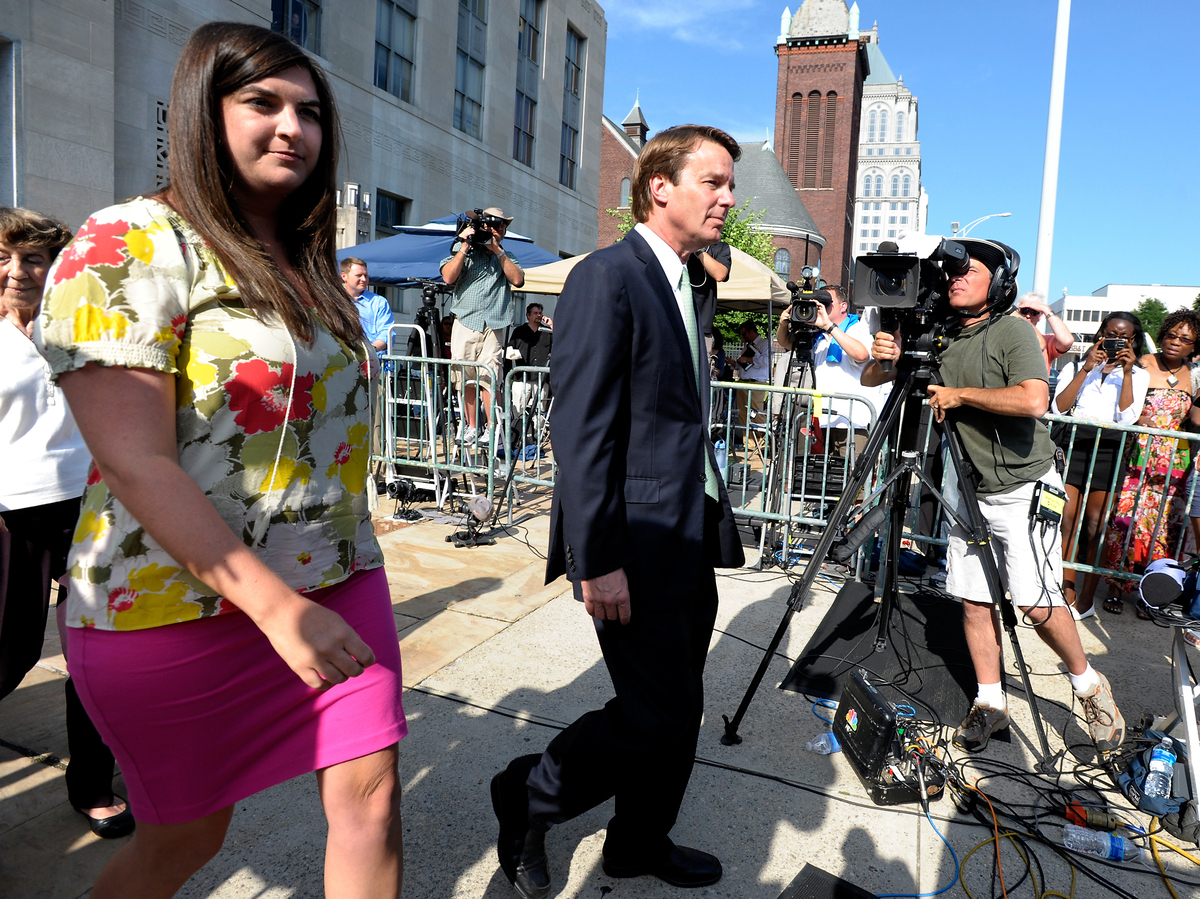 With a not guilty verdict on one count and the jury deadlocked on five others, it appears John Edwards' federal trial on campaign-finance charges ended with a whimper, certainly from the Justice Department's point of view.

At first blush, it can be argued that how the trial of the former U.S. senator from North Carolina ended may do little to deter politicians. They'll still be able to go forward and rake in money from supporters and, with some sleight of hand, spend that cash on practically anything.

After all, if a married presidential candidate, as Edwards was in 2008, can get away with supporters paying nearly $1 million to hide his mistress and the baby from that affair, it strains the imagination to come up with what isn't possible.

Some analysts have certainly described the case as a pre-Citizens United relic; that's the 2010 Supreme Court decision that made the giving of unlimited money to superPACs relatively easy. Wealthy donors can now readily shovel unlimited money toward their preferred candidates, even if they have to maintain the polite fiction of doing it indirectly.

But while the Edwards trial was clearly a loss for the prosecutors, some analysts believe that it wasn't a total loss for the notion of campaign-finance law.

That's because despite the outcome, they view the trial as sending a powerful message that while prosecutors might fail to secure a criminal conviction, they can make life miserable for any politician they target. In other words, the fact that it may keep many politicians anxiously looking over their shoulders is a good thing.

Richard Hasen, a law professor at the University of California at Irvine who writes the Election Law Blog, said by email:

"...The very fact that he was prosecuted is what matters — and is already causing candidates and their campaigns to be very careful. We've seen high profile campaign finance-related prosecutions from Edwards to Ted Stevens to Don Siegelman to Tom DeLay.

"A prosecutor looking to make a name for himself or herself has a reason to stretch the campaign laws and prosecute prominent prosecutions criminally."

While Edwards' acquittal could make prosecutors less likely to bring such cases, it doesn't mean it's impossible that they will, he said.

And that possibility stands out as a stark warning to politicians of what could happen if they decide to walk right up to the edge of the existing law, even with all its ambiguities as to what constitutes a campaign contribution or "willful" and "knowing" violations of the law by a political candidate.

Meredith McGehee, policy director, for the Campaign Legal Center, said despite the surprising weaknesses in the prosecution's case, the effort was worth it.

"I'm glad that they brought it. Otherwise it would be sending the signal that this kind of behavior [goes] unpunished and unexamined."

McGehee doesn't buy the argument that Citizens United has turned campaign finance law so upside down that anything goes. Edwards' wealthy supporters Rachel "Bunny" Mellon and the late Fred Barron would have still had some constraints on what they could spend on, she said:

"It's true that Mellon and Barron could have given large and unlimited amounts to a superPAC. But that's very different than paying off a mistress. That's where I think the argument falls apart.

Because the six-member FEC has an even partisan split, it often deadlocks on enforcement measures, making it in many instances little more than a paper tiger.

Like Hasen, McGehee believes the Edwards trial will make politicians think twice before doing anything that would expose them to the sort of treatment the Democrat received:

"The public flogging, if you will, will serve as a deterrent for anyone not looking to be publicly humiliated. And his family who's humiliated. For me, the most heart-wrenching spectacle through this whole thing was watching his daughter going to court every day and hearing what was going on with him, what was going on with her parents marriage. I don't think how any sane individual could say, 'Oh, he didn't get convicted. Maybe I'll try going this route.'

"Obviously, politicians clearly have big egos and the blind spots those egos create. But I don't think anyone would look at what Edwards has gone over the last few years and say, 'Oh, he got away with it, so therefore I don't need to be careful.'"

Of course, there's other fallout from the Edwards trial that goes beyond its effect on other politicians. That would be its contribution to the public's already very low opinion of politicians.

Edwards, from the time he emerged onto the national political scene in 1999 as a fresh-faced senator with a powerful personal story of great success and personal tragedy, seemed almost too good to be true.

It turned out he was, becoming another in a long line of politicians who voters trusted only to feel betrayed.