Accessibility links
Congress May Not Be As Bad As All That : It's All Politics A government scholar says Washington has responded better to the economic downturn — certainly better than its European counterparts — than its reputation might lead people to believe. But not everyone is convinced.

Congress May Not Be As Bad As All That

Congress May Not Be As Bad As All That 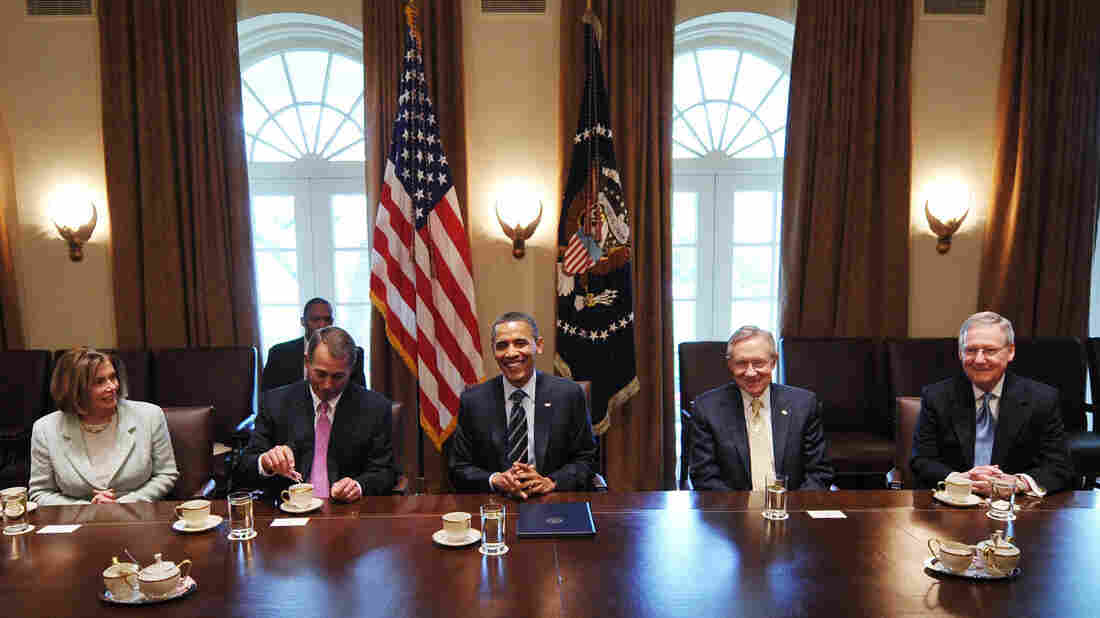 See, they really can get along. President Obama met with bipartisan House and Senate leadership on fiscal policy including (from left) Nancy Pelosi, John Boehner, Harry Reid and Mitch McConnell last year in the Cabinet Room of the White House. Mandel Ngan/AFP/Getty Images hide caption 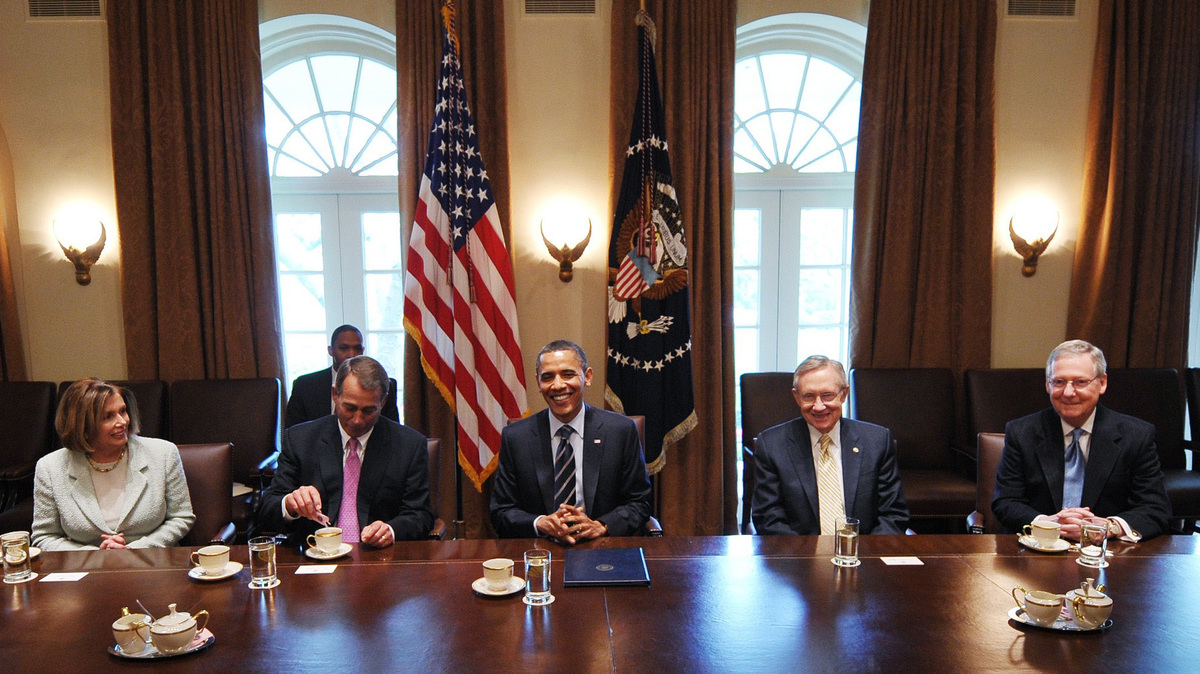 See, they really can get along. President Obama met with bipartisan House and Senate leadership on fiscal policy including (from left) Nancy Pelosi, John Boehner, Harry Reid and Mitch McConnell last year in the Cabinet Room of the White House.

Washington isn't working. With control of the government divided between the parties and every political incentive working against bipartisan cooperation, Congress can barely pass the minimum amount of legislation needed to avoid a government shutdown, let alone address the most pressing issues of the day.

Such is the argument laid out in countless blog posts, articles and even books. The public certainly doesn't think Washington is functioning: Congress' approval rating hit a new low of 10 percent earlier this year.

But one government scholar says all the current hand-wringing about Washington's dysfunction is misguided.

The biggest challenge for all rich nations in recent years has been to find a way out of the recession and sustain growth, says Pietro Nivola, a senior fellow at the Brookings Institution. By that measure, U.S. politicians are doing a lot better than their European counterparts. 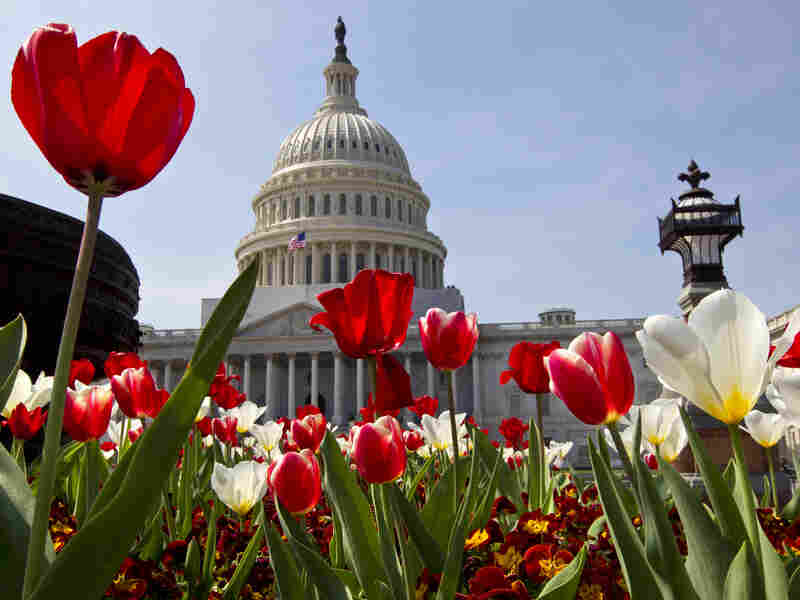 Flowers bloom at the U.S. Capitol in Washington, D.C., though the same can't be said of bipartisanship. J. Scott Applewhite/AP hide caption 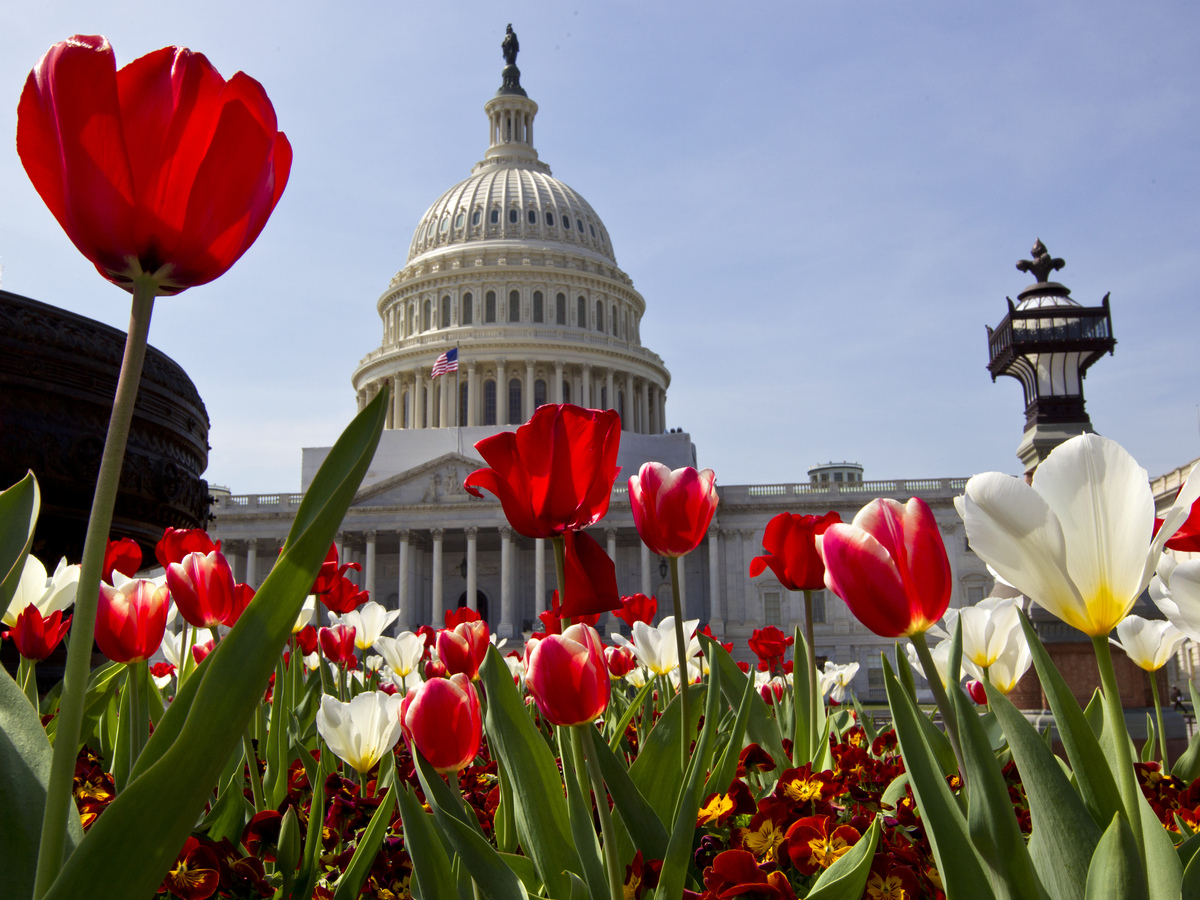 Flowers bloom at the U.S. Capitol in Washington, D.C., though the same can't be said of bipartisanship.

"Could it be that, for all the laments about America's 'gridlocked' and 'broken' political system, it actually appears to have done a better job contending with the Great Recession and its aftermath than do many other advanced democracies?" Nivola writes. "Increasingly, it looks that way."

Since the financial crisis of 2008, he points out, Congress has managed to pass the bank bailout bill known as TARP, rescue the domestic auto industry, extend the Bush-era tax cuts and pass an enormous stimulus bill. Nivola describes Congress' inability to pass more recent budget and tax measures as a "useful stasis," meaning those ideas would have done more harm had the House and Senate actually been able to agree on a course of action.

But Nivola admits to some trepidation about how Congress might respond to the fiscal challenges it faces after the November election. The combination of a fresh expiration date for the Bush tax cuts and a spate of automatic spending cuts could lead to what is variously being described as "the fiscal cliff" and "taxmaggedon."

"We haven't addressed the longer-term picture at all," Nivola said in an interview. "That's just where we seem to be paralyzed."

Nivola shouldn't worry, suggests Bill Connelly, a political scientist at Washington and Lee University in Virginia and author of the book James Madison Rules America. Congress will doubtless engage in further partisan brinkmanship — regardless of whether President Obama or Mitt Romney is its prime negotiating partner next year — but what we have come to view as hopeless gridlock is a feature, not a bug, in the American system of checks and balances, he says.

"We have a long history of running up to deadlines and crises, sometimes artificially constructed, and then we solved them," Connelly says. "Congress is like college students – they do all their work at the last minute, when the deadlines are looming."

Not everyone is so sanguine. Even when Washington does manage to find its way to some sort of resolution, the process of legislative sausage-making has become so open and ugly that some worry bad congressional habits and bipartisan disagreements have become problems in and of themselves.

Just last month, the governor of "the other Washington," Democrat Christine Gregoire, complained that Congress' last-minute deal in August to raise the debt ceiling and avoid a government shutdown had almost instantly had cost Washington state $1.4 billion in projected economic growth, as consumer confidence took a hit.

Perceptions about federal policymaking are already so negative, in other words, that even if the president and Congress do the right thing in the end, they can still do harm by appearing divided and dawdling.

"There's a cost to that type of legislating," says Sarah Binder, a colleague of Nivola's at Brookings and a Congress watcher at George Washington University in Washington, D.C. "Even if at the end of the day we stare at the abyss and reach agreement, that's probably not good enough."