Accessibility links
Romney, Obama: When Wooing Female Voters, Check Marital Status First : It's All Politics Will unmarried women, representing about a quarter of the nation's eligible voters, retain their ballot-box ardor for President Obama? And will their married counterparts give Republican Mitt Romney more electoral love than they gave John McCain in 2008? The answers could decide the election. 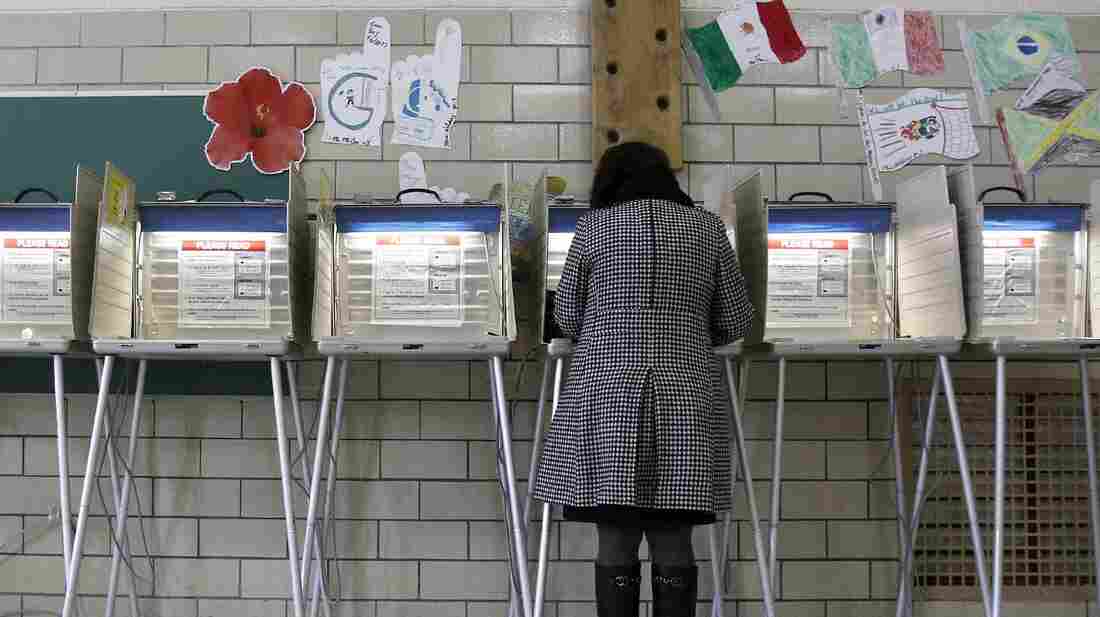 A voter casts her ballot in Stow, Ohio, during the March 6 primary. David Maxwell/EPA/Landov hide caption 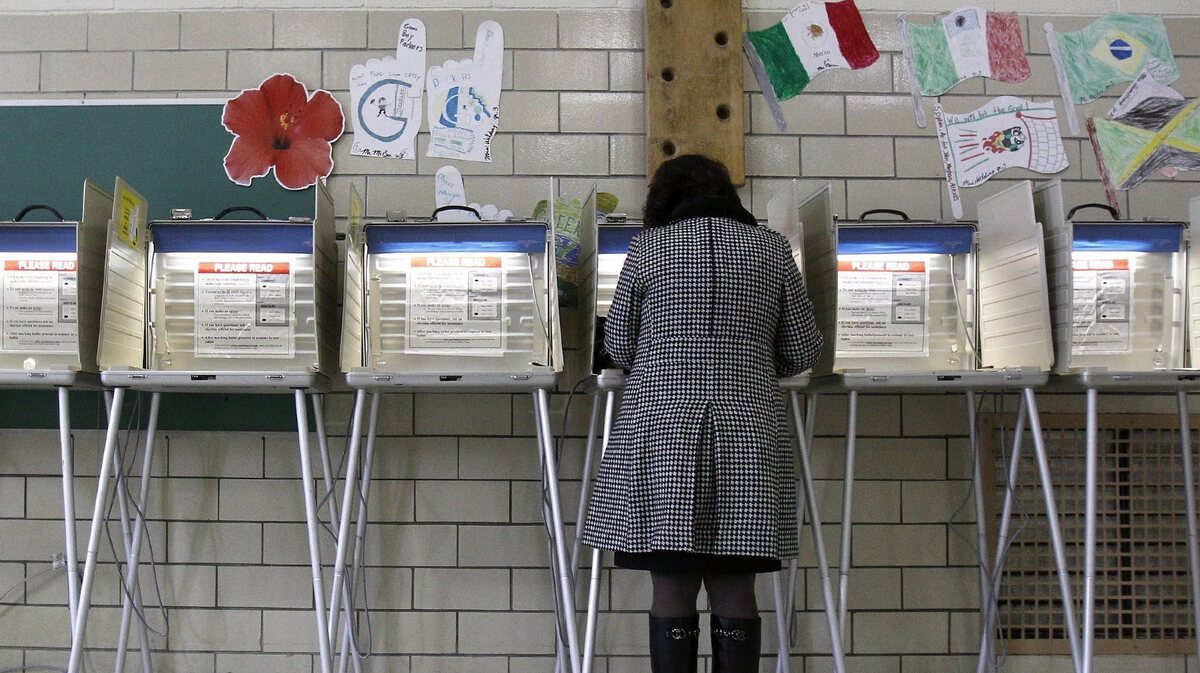 A voter casts her ballot in Stow, Ohio, during the March 6 primary.

What do women want, electorally speaking?

We know that women, like men, are "not some monolithic bloc," to quote the current occupant of the White House.

But as a group they are reliably influential voters, more risk-averse than men, and — pollsters tell us — generally more likely than the opposite sex to vote for Democrats, oppose the use of military force and support government programs.

In 2008, unmarried women, one of the nation's fastest-growing demographic groups, were a key to Barack Obama's presidential win.

They broke for the Democratic senator from Illinois over Republican Sen. John McCain, 70 percent to 29 percent; married women preferred McCain, 50 percent to 47 percent.

But — and this is key — married women supported Republican George W. Bush in both those earlier elections by measurably wider margins than they went for McCain.

In 2004, for example, they preferred Bush over Kerry by 11 percentage points.

So it's no surprise that female voters have been a focus of both parties going into a presidential contest that promises to be exceedingly close.

Democrats have been fueling their Republican-war-on-women narrative; Republicans are counterprogramming with a focus on how women have been walloped as the economy continues to falter.

Instead of just asking what women want, the more salient question may be a two-parter:

We put those questions to pollsters who have been tracking voter preferences in this presidential year. Here's what we've come away with at this point in the race:

Republicans will most likely continue to have marginal opportunity for inroads with unmarried women, even given the faltering economy.

Unmarried women present Republicans their most vexing combination — voters who are predominantly young, or youngish, and women. "Both groups are very difficult for Republicans," says Iowa-based pollster J. Ann Selzer, who conducts surveys for Bloomberg News. 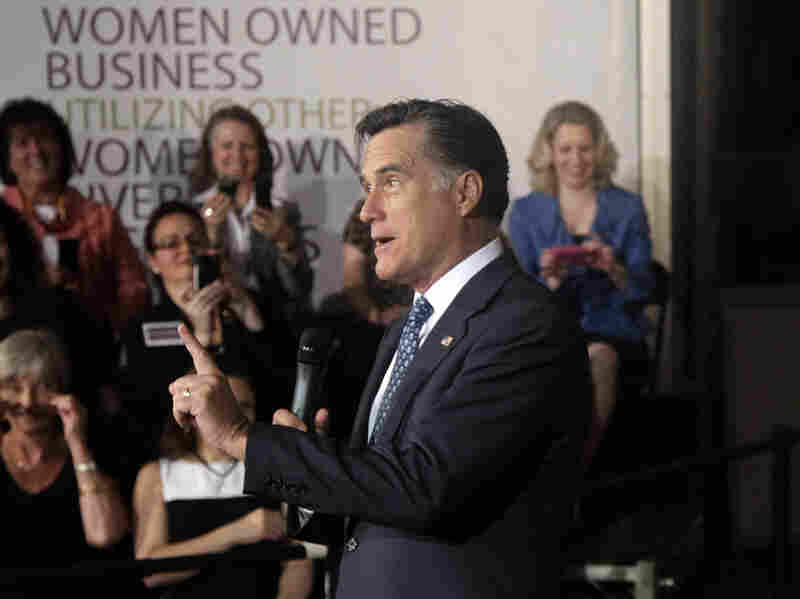 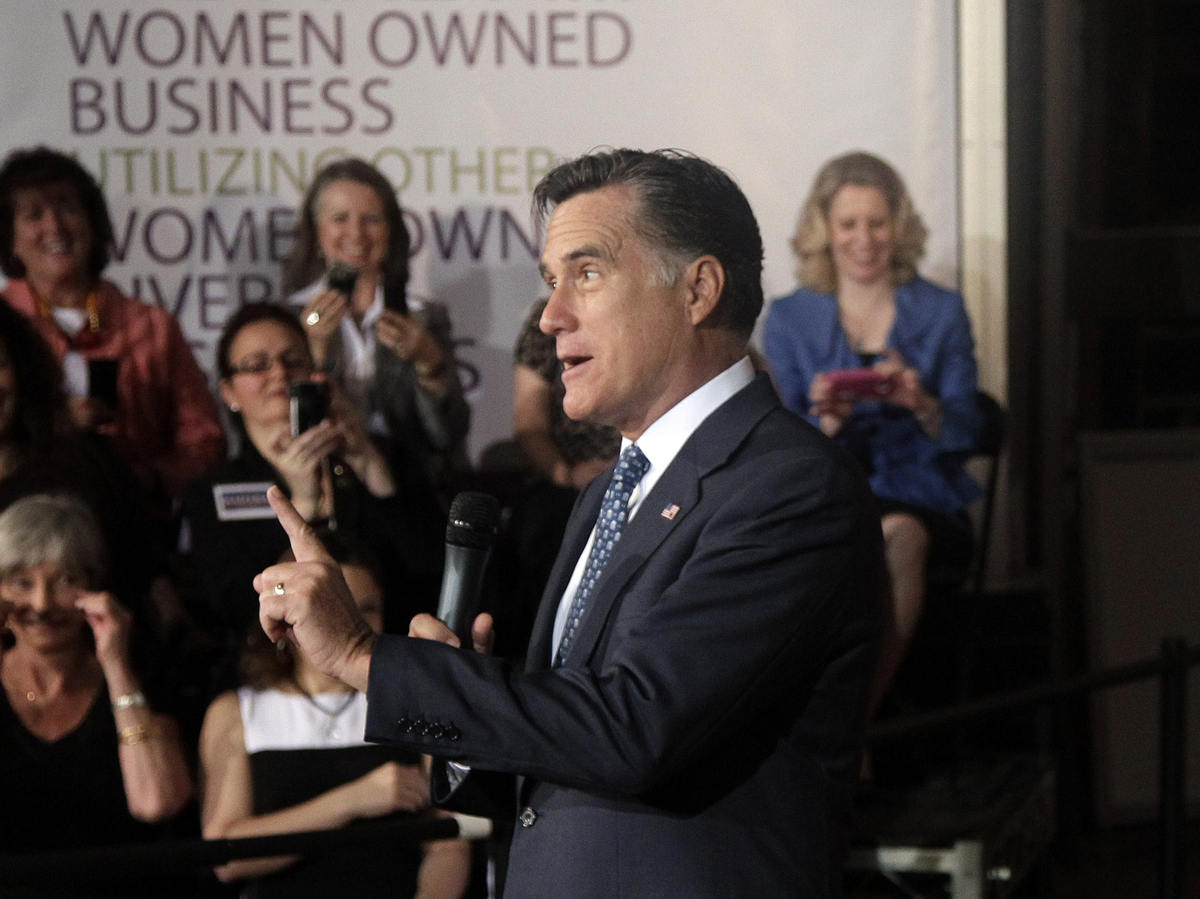 Mitt Romney speaks to a group that included female business owners in Chantilly, Va., on May 2.

In some ways, the task is even more difficult than trying to peel away African-American votes from the Democratic Party. "They have more opportunity with Hispanics than with women," Selzer says, noting, however, that Romney may have room to increase his margin with "affluent white women."

Says ABC pollster Gary Langer of Langer Research Associates: "A Republican candidate is a hard sell among unmarried women because they are so rooted in the Democratic Party."

Romney has the opportunity to gain ground with married women.

Langer argues that incumbents like Obama typically get the benefit of the doubt when people make Election Day choices. If voters decide they're satisfied with the incumbent, "you move on, you're done." The challenger gets a look only after that initial calculation.

"But I think Obama loses some of the natural advantages of incumbency because of the economy," Langer says. And, among women, those who are married "are more movable, and present more opportunity for the Republican Party," he says.

ABC's late May survey that showed a Romney rebound among women (though he still trailed Obama in favorability, 52-41 percent) largely reflected Republican women coalescing around the candidate at the end of the party's primary season battles.

But, Langer says, those moving to Romney also included a not-insignificant number of non-Republican women, independents, and "even some Democratic women expressing a more favorable view."

A Selzer survey for Bloomberg released in March showed that women view the Democratic Party only a bit more favorably than they do the GOP.

The female-vote gap may benefit Obama in states where contraception and abortion issues were local.

A new Quinnipiac University Polling Institute survey taken in Pennsylvania cited Obama's strong support among women and independents as fuel for his 46-40 percent lead over Romney in the Keystone State. 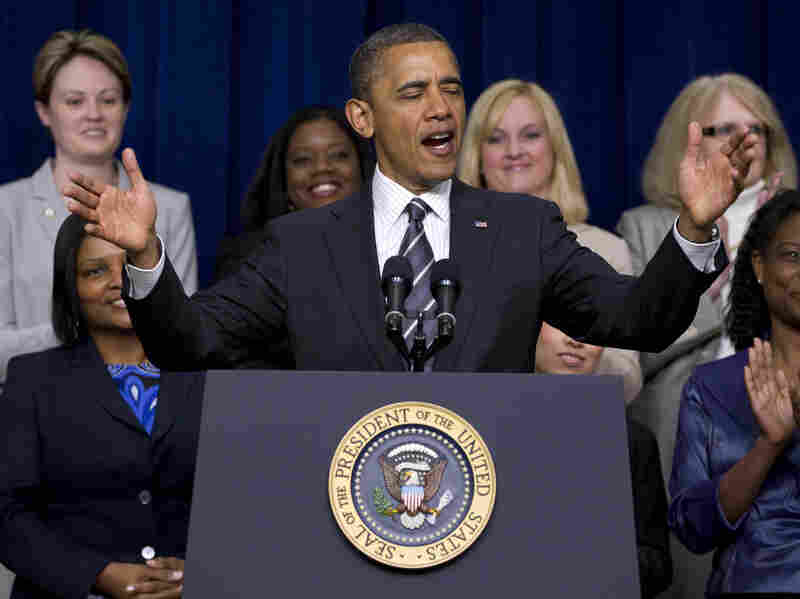 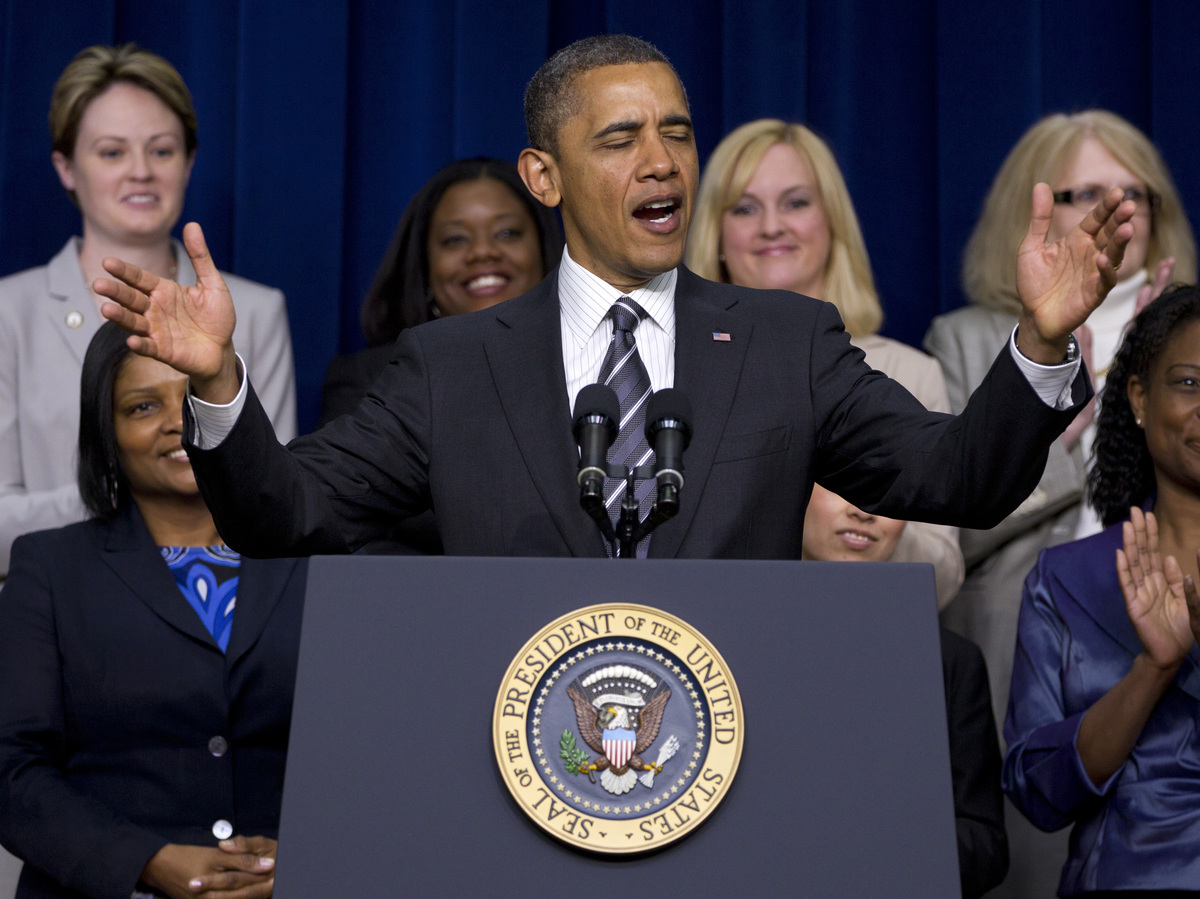 President Obama speaks at a White House forum on women's issues on April 6.

Tim Malloy, the institute's assistant director, says that comments made in March by the state's GOP Gov. Tom Corbett defending a bill that would have required women to have an ultrasound before an abortion contributed to the president's hold on a steady lead. (Corbett said that an ultrasound is not that big an issue because women "just have to close your eyes" during the procedure.)

"I'm not saying there's a war on women, but this perpetuated the perceptions that Democrats have pushed," Malloy says. The "war on women" narrative is a "long-term strategy," Selzer says, "and Democrats are working to provide the evidence that it's true." That included pushing the "Paycheck Fairness Act" in Congress last week.

Polling in Pennsylvania, however, also shows that Romney is outperforming Obama on the question of who is better on the economy, while the president's personal popularity continues to exceed Romney's.

The economy will be the key for men and women, and it's up to the candidates to make their case.

"The economy overwhelmingly is the issue of the election," Langer says, noting that more than half of people he surveyed named it as the most important issue, with all other issues measuring in the single digits. "In the later spring," he notes, "we've had a period of increasing economic discontent with a slowdown of earlier-year improvements in the job market — and that's weighing fairly heavily on women."

The president, he says, is vulnerable on the economy. "Mitt Romney will get a look, but he has not seized the opportunity and proven that he can do better," Langer says. "The question is, can he make the case that he can?"

What women, married and unmarried, want isn't very different from what men want, what all Americans want, he says: a return to economic opportunity and an ability to get and hold a job.

There is opportunity for both Obama and Romney, with a narrow but important cadre of female voters, largely married, largely moderate, to help swing November's vote in their favor.