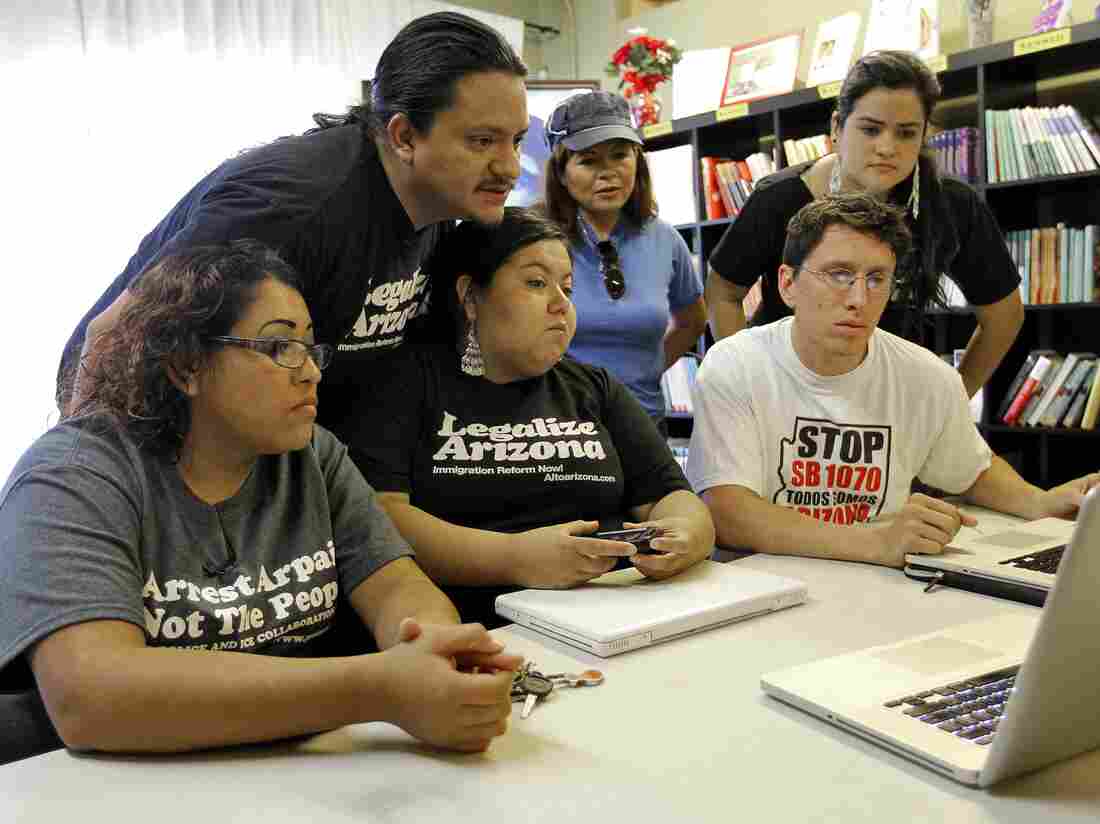 Members of the Puente Movement follow the Supreme Court's ruling on the Arizona immigration law from their office in Phoenix. Matt York/AP Photo hide caption 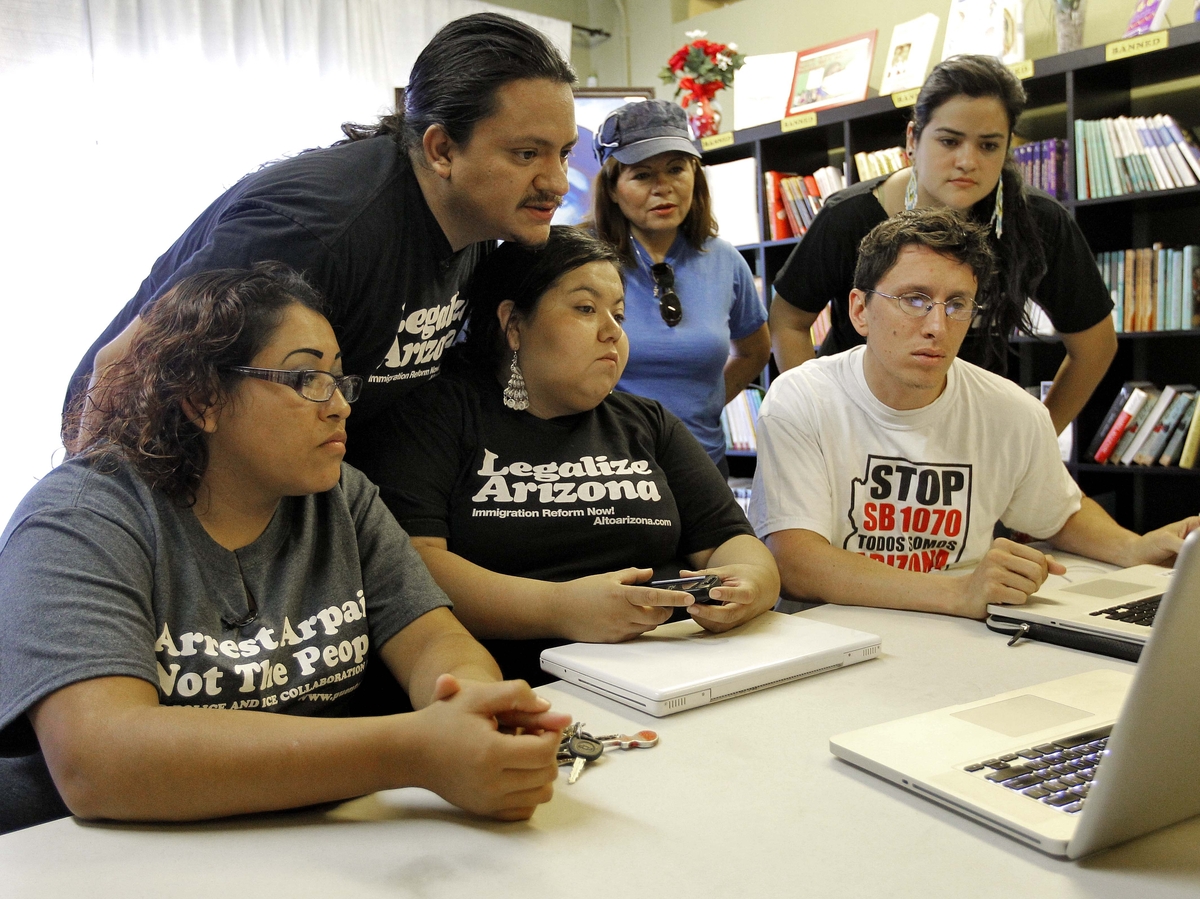 Members of the Puente Movement follow the Supreme Court's ruling on the Arizona immigration law from their office in Phoenix.

The political impact of Monday's Supreme Court ruling that three of four provisions of Arizona's immigration enforcement law are unconstitutional — and that a fourth could eventually be found to be — certainly appeared, at first blush, to be a significant political win for President Obama.

The Obama administration, after all, had challenged Arizona's controversial SB 1070 legislation as usurping the federal government's power to enforce the nation's immigration laws, a stance the high court mostly agreed with.

Because many Latinos and immigrant-rights groups found the Arizona law to be repellent owing to features they feared would encourage racial profiling and discrimination, that the Obama administration sided with them had already helped the president deepen his support with Hispanic voters.

The 5-3 decision from a conservative court in which Chief Justice John Roberts joined the majority only strengthens the president's argument that he was right, and Arizona officials wrong on an issue with special significance to a key bloc of voters — Latinos — whose support he is counting on for re-election.

For the same reason, the Supreme Court decision seemingly complicates the political picture for Mitt Romney, the all-but-official Republican presidential nominee. Romney, who took a hard-line immigration stance during the Republican primaries, has been forced to try to walk the tightrope between appealing to conservatives wanting tougher enforcement while at the same time doing what he can to keep the wide gap in Latino support that exists between him and the president from getting any wider.

The statements issued by both Obama and Romney captured the differences in their situations. Obama welcomed the Supreme Court decision and vowed that his administration would police Arizona's use of the so-called papers-please provision the court upheld. That provision requires Arizona police to inquire about the immigration status of people stopped for other causes if the police have reason to suspect someone's immigration status. Obama said:

"I am pleased that the Supreme Court has struck down key provisions of Arizona's immigration law. What this decision makes unmistakably clear is that Congress must act on comprehensive immigration reform. A patchwork of state laws is not a solution to our broken immigration system — it's part of the problem.

"At the same time, I remain concerned about the practical impact of the remaining provision of the Arizona law that requires local law enforcement officials to check the immigration status of anyone they even suspect to be here illegally. I agree with the Court that individuals cannot be detained solely to verify their immigration status. No American should ever live under a cloud of suspicion just because of what they look like. Going forward, we must ensure that Arizona law enforcement officials do not enforce this law in a manner that undermines the civil rights of Americans, as the Court's decision recognizes ..."

In his statement, Romney blasted the president but did not specifically say whether he agreed with the Supreme Court's ruling:

"Today's decision underscores the need for a President who will lead on this critical issue and work in a bipartisan fashion to pursue a national immigration strategy. President Obama has failed to provide any leadership on immigration. This represents yet another broken promise by this President. I believe that each state has the duty — and the right — to secure our borders and preserve the rule of law, particularly when the federal government has failed to meet its responsibilities. As Candidate Obama, he promised to present an immigration plan during his first year in office. But 4 years later, we are still waiting."

Gary Segura, a Stanford University political scientist, viewed the decision as a decidedly mixed one for Latinos, since the most repugnant part of the law to them, police inquiries into immigration status, survived.

But he saw the decision as having substantial benefits for Obama, giving the president the best of both worlds:

"I think it's a huge win for two reasons. First, losing on that one provision is very likely to mobilize voters. The threat is still there; the threat is still meaningful. But the president and his administration intervened on behalf of Latinos and defeated three of the four provisions. ...

"And of course Gov. Romney and the Republicans embrace the part of the law that was upheld. So the president can go to Latino voters and say, 'I had your back. I sued on [your] behalf ... I got three out of four of them overturned. But there's still a threat since Republicans think it's such a great idea.' So, politically, I think it's a huge win for the administration."

Charles Foster, a prominent Houston immigration lawyer, thinks the Supreme Court decision didn't do Romney any favors. Foster, by the way, has been a bipartisan immigration-policy adviser, first to George W. Bush in 2000 and 2003, then to Obama in 2008. He also filed a friend-of-the-court brief supporting the Justice Department's challenge of the Arizona law.

"This decision puts more pressure on Gov. Romney than on President Obama. The Obama administration has been criticized for having challenged the Arizona law in the Supreme Court, but here you have a fairly conservative court by and large upholding Obama's position that this is a federal issue.

"On the other hand, Gov. Romney, I think, in ways that didn't really reflect his true beliefs, tactically took hard positions during the primary. He wound up taking the position that adopting Arizona-type laws was a good thing for the states to do.

"This decision will put him in the potentially awkward position of having to say that as president he would seek federal approval to do precisely what the Supreme Court has struck down."

Not everyone thought that Romney would necessarily have to play defense after the high court decision.

Did Romney need to distance himself from the Arizona law or revise his rhetoric? Scott Cottington, a Minnesota-based Republican consultant and former political director for the National Republican Senatorial Committee was asked:

"It seems to me that if a candidate for national office makes statements in support of federalism, and the rights of states to do things even if turned back by the Supreme Court, that's a good thing. States try things, the Supreme Court rules, and there's more clarity. I tend to think that indicates the process is working.

"What Romney needs to do over the next four of five months, I don't know. I do know that you can't outpander Obama."

Romney's statement provides some clues about what he is likely to continue doing to undermine the president's approval ratings with Latino voters. That is to point out that Obama, who promised comprehensive immigration reform legislation as a presidential candidate in 2008, has failed to deliver. As Segura said:

"What he is trying to do is accentuate the president's failures on immigration which are there, which are meaningful and which, prior to a week ago, I think were a real drag on the enthusiasm of Latino voters."

That was an allusion to the president's announcement that he would essentially implement parts of the DREAM Act legislation stalled in Congress. Besides deferring deportation proceedings for some young illegal immigrants brought to the U.S. by their parents, the president's move would also allow such immigrants to get work or student visas. Segura said:

"What he's not saying, and what every Latino voter already knows if they pay attention to Jorge Ramos or any Spanish-language media or for that matter, English-language media, is that the obstacle for immigration reform has been and continues to be the Republican Congress.

"You'll notice that the statement doesn't have any immigration policy in it. It's not the case that Romney's promising to deport less people. It's not the case that Romney's arguing for going beyond the president's suspension of deportation for DREAM-eligible kids. It's none of the above, and he sides with Arizona. Arizona has the right to defend its borders. So I think that has very little effect. They're trying to thread the needle and they're not going to do it."

Still, while unpopular with many Latino voters, the Arizona law has many supporters in the rest of the electorate. A recent Pew Research Center poll found that a solid majority of voters, 58 percent, supported the law while 38 percent didn't.

True, that level of support was down from the 64 percent who two years ago said they approved it, but it was still a substantial majority.

Updated at 6:08 pm — Romney spokesman Rick Gorka had an exchange with reporters on the Romney plane Monday did little to shed much light on the candidate's views. An excerpt from Politico.com:

GORKA: "The governor supports the states' rights to craft immigration laws when the federal government has failed to do so. This president promised as a candidate to address immigration in his first year and hasn't, and waited actually 'til four and a half months before the election to put in place a stopgap measure."

QUESTION: So does he think it's wrongly decided?

GORKA: "The governor supports the states' rights to do this. It's a 10th amendment issue."

QUESTION: So he thinks it's constitutional?

GORKA: "The governor believes the states have the rights to craft their own immigration laws, especially when the federal government has failed to do so."

QUESTION: And what does he think about parts invalidated?

GORKA: "What Arizona has done and other states have done is a direct result of the failure of this president to address illegal immigration. It's within their rights to craft those laws and this debate, and the Supreme Court ruling is a direct response of the president failing to address this issue."

And so it went for minutes more.

At an appearance in Scottsdale, AZ, Romney did go beyond his statement of earlier in the day. An excerpt from The Wall Street Journal which reported on what he said at a fundraiser:

"Now you probably heard today there was a Supreme Court decision relating to immigration and, you know, given the failure of the immigration policy in this country, I would have preferred to see the Supreme Court give more latitude to the states not less," Mr. Romney told donors at a Scottsdale, Ariz., fundraiser. "And there are states now under this decision have less authority, less latitude, to enforce immigration laws."