Accessibility links
Obama's Supreme Court Health Care Victory Hard To Overstate : It's All Politics President Obama's big victory on the law so identified with him that it's called "Obamacare" means he can campaign more boldly on the law as a major achievement. He also won't have to counter claims that he wasted the first years of his presidency. 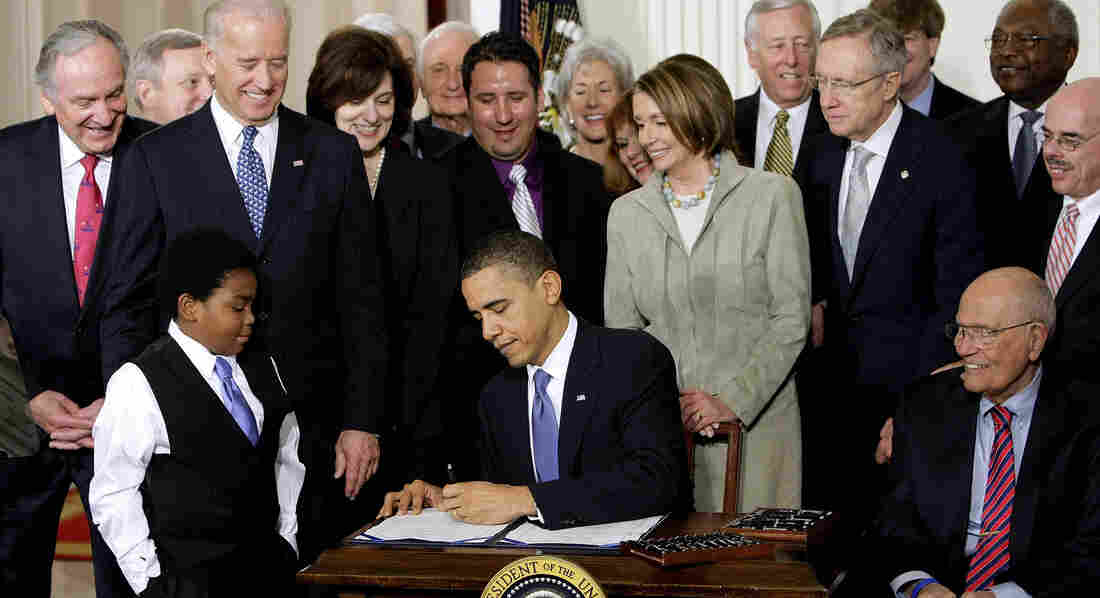 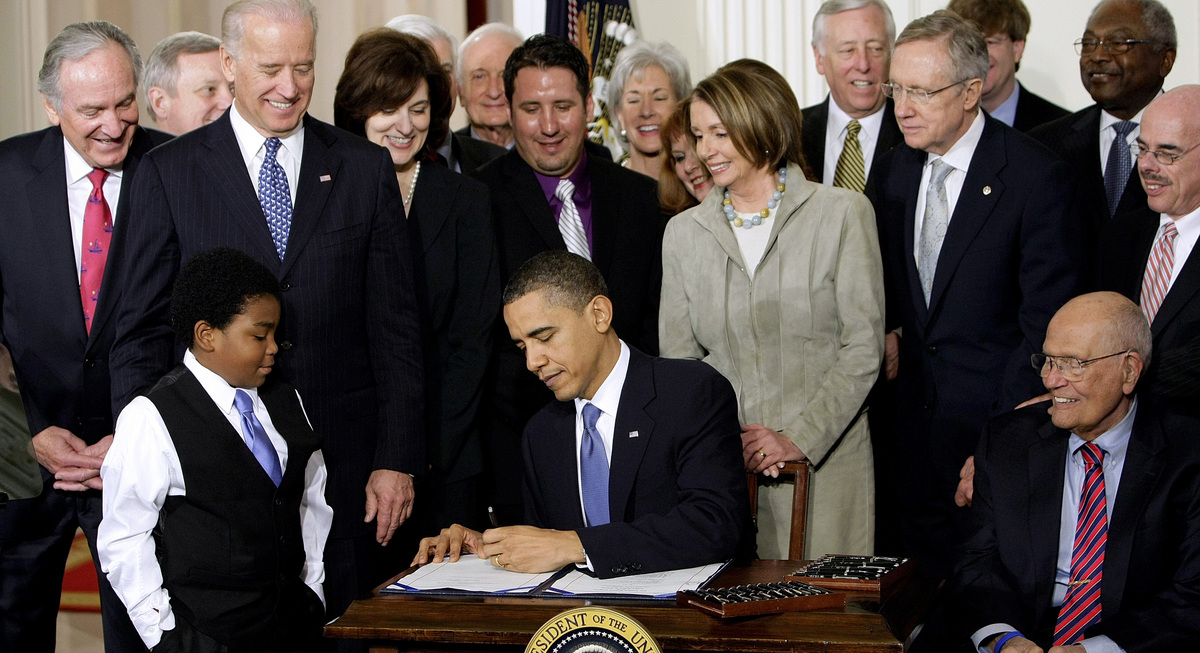 President Obama signs the health care bill into law at the White House on March 23, 2010.

Even in Washington, a city where hyperbole rules, it still seems difficult to overstate how big a win the Supreme Court's decision on President Obama's signature piece of domestic legislation is for the man in the Oval Office.

The Affordable Care Act is so identified with him, after all, that its opponents quickly dubbed it "Obamacare," a term supporters at first eschewed but later came to embrace.

Though it was only the narrowest of victories, a 5-4 decision with Chief Justice John Roberts writing for the majority, a win is a win. And it was a victory the president needed badly though it could boomerang if Roberts' interpretation of the individual mandate as a tax becomes a liability for Obama.

With the economy still weak and likely to deliver some downside surprises in terms of jobless numbers between now and November, the president is clearly vulnerable on that primary domestic issue.

A loss for Obama would have strengthened the arguments of challenger Mitt Romney and other Republicans that the president had foolishly squandered much of his early presidency on what turned out to be an unconstitutional expansion of federal power over the lives of Americans and the states.

The court's decision Thursday, for all practical purposes, ends that argument, however, since whatever a majority of the court decides is constitutional is so by definition.

While he had plenty to be happy about, Obama kept his remarks following the decision measured and matter of fact. Speaking from the White House East Room, he said:

The decision instead allows the president to argue even more full-throatedly than he already has been doing on the campaign trail that enacting the health care law was the "right thing to do."

After the legislation passed in 2010 and it became clearer that it was unpopular with many Americans across the political spectrum, Obama and other White House officials were reticent to the point of silence talk about the law as an accomplishment.

In recent months, the president has included the law in his stump speeches in the litany of achievements from his time in office. The Supreme Court's decision will let him pump up the volume even more.

Meanwhile, the decision could boost the spirits of Obama's most loyal supporters, many of whom until the past year would say they didn't feel like the president had given them much to cheer about.

The decision, however, is also already energizing the president's opponents. House leaders have scheduled another vote to repeal the law, symbolic since a repeal has no chance of being passed.

Romney's campaign reported more than $100,000 in donations coming in right after the court's announcement.

In his reaction to the high court decision, Romney said:

"What the Court did not do on its last day in session, I will do on my first day if elected President of the United States. And that is I will act to repeal Obamacare.

What's more, because Roberts found the law's individual mandate constitutional under the federal government's taxing power (the penalty for not having insurance should be read as a tax, he said) Republicans are counting on Obama being vulnerable to new charges that he's raising taxes on the middle class.

That could be a powerful weapon, especially since the president vowed not to raise taxes on Americans making less than $250,000 a year.

One of the most important aspects of the court's decision, for Obama at least, is that it ensures that a key piece of Obama's legacy survives, at least until there comes a time — if it ever occurs — when a different president and different Congress have the votes to repeal it.