Accessibility links
Court's Health Ruling Excites GOP, But Will Voters Remember In November? : It's All Politics One of the greatest unknowns right now is whether the Supreme Court's decision will significantly change the public's opinion of the health care law. Until Thursday, numerous polls indicated a majority of voters opposed the law. The court's seal of approval could help change that. 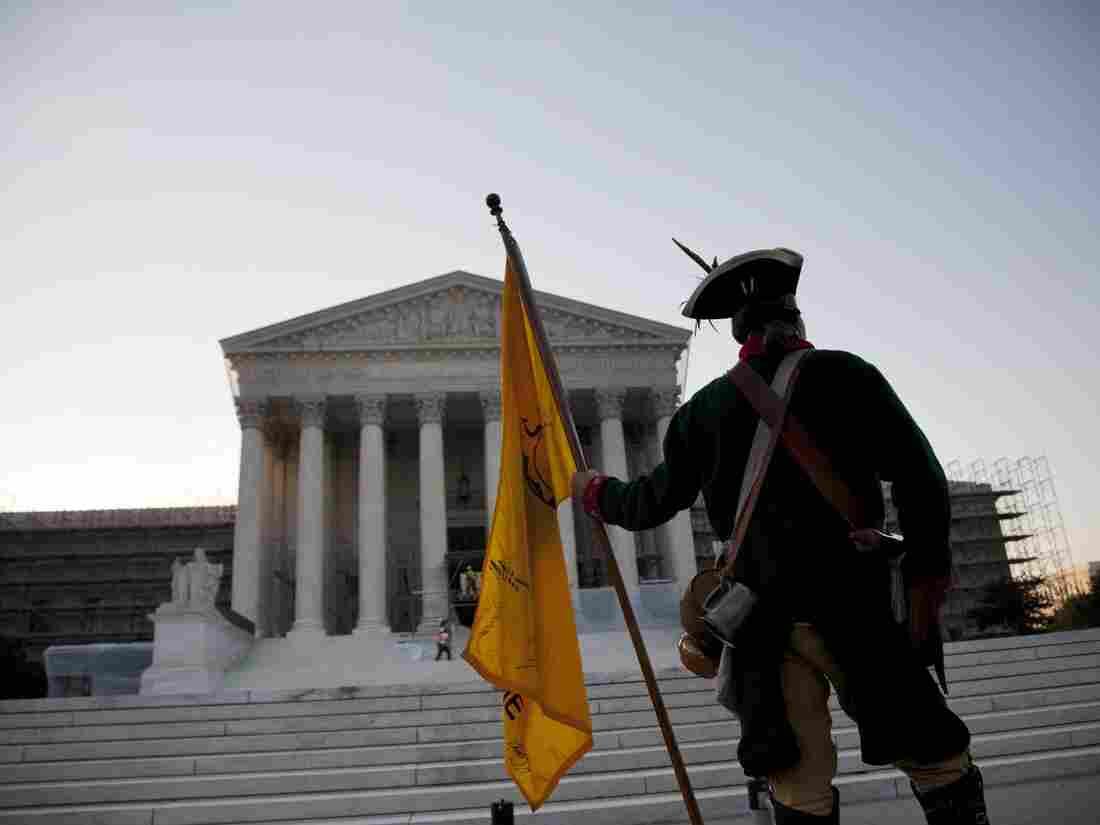 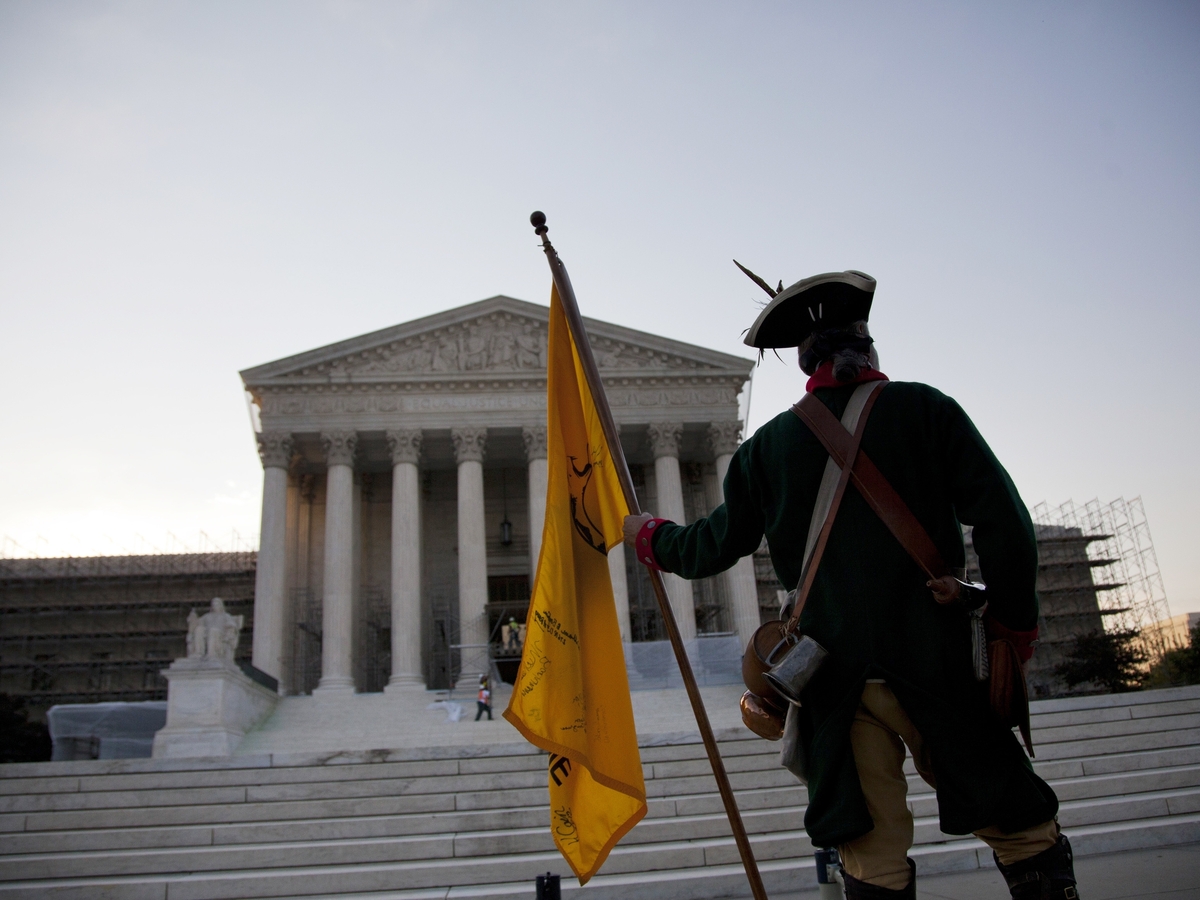 In the wake of the Supreme Court's landmark decision to uphold the Affordable Care Act, one of the burning questions is how will the decision play out politically?

President Obama even acknowledged the inevitability of the political maneuvering and handicapping in his comments from the White House soon after the high court delivered its decision. But he did stress that politics wasn't what really mattered in the end.

"I know there will be a lot of discussion today about the politics of all this, about who won and who lost. That's how these things tend to be viewed here in Washington. But that discussion completely misses the point. Whatever the politics, today's decision was a victory for people all over this country whose lives will be more secure because of this law and the Supreme Court's decision to uphold it."

But, of course, politics do matter, especially because the decision came as it did, amid a general election campaign in our supercharged partisan era.

Few could be sure of which side, Democratic or Republican, would ultimately gain the the most advantage from the decision. It was clear, though, that the Supreme Court had shifted the terms of the debate somewhat.

Chief Justice John Roberts seemed to close one door on the law's conservative critics, who've argued that the law is unconstitutional. But he opened another for them when he said the individual mandate should be considered a tax.

By doing so, he assured that the law would now be open to a new anti-tax line of attack, fueling the desire on the part of may Republicans to repeal the law. In that way, the decision contained something of a poison pill for Democrats.

If there was any doubts that the thrust of the Republican argument against the law had changed, a look at the website of Grover Norquist's Americans for Tax Reform would clear up all confusion.

Taxpayers are reminded that the President's healthcare law is one of the largest tax increases in American history.

Speaker John Boehner of Ohio, like many Republicans Thursday, seized on the tax point:

"So, the government could decide that we're going to tax you if you don't eat broccoli on Tuesday, Apparently, that's now constitutional. But I don't that's a wise law... "

"... I think the real outcome of today's decision is to strengthen our resolve to make sure that, in fact, this law is repealed."

Boehner's comments reflected the renewed energy that the court's decision seemed to breathe into conservatives who, as Byron York of the conservative Washington Examiner wrote, were mostly confident that the court would, at the very least, overturn the individual mandate.

That energy reportedly resulted in Mitt Romney, the all-but-official Republican presidential nominee raising more than $2 million in the 6 1/2 hours following the decision. Romney undoubtedly helped himself raise that money by promising in his public remarks after the decision to make repealing the health care law one of the first things if he becomes president.

ROMNEY: "This is the time of choice for the American people. Our mission is clear: If we want to get rid of Obamacare, we're going to have to replace President Obama. My mission is to make sure we do exactly that."

While some pundits thought the decision would have the greatest political benefits for Obama and congressional Democrats, Stuart Rothenberg, one of Washington's better known political analysts, wasn't so sure.

"...The way the court – or, Justice Roberts – justified upholding the law, by calling it a tax, has a substantial downside for the White House and for Democrats who supported it.

Had the Court thrown out the law, Republicans would have had to scramble to figure out what to offer as a replacement. Democrats could have raised the specter of people being denied insurance for pre-existing conditions and young adults being thrown off their parents' policies.

"Now, Republicans can attack the law not only for being "big government" but for being a huge tax during in weak economy, adding burdens to middle class taxpayers and slowing economic growth. And the GOP doesn't have to come up with a detailed plan to "replace" Obama's health care plan."

But even if Republicans were to ride the Obamacare-is-a-big-new-tax horse all the way to the White House and control of the Senate, they still would encounter political challenges to delivering on their promise of "repeal and replace" to their supporters.

As Sarah Binder, an expert on Congress and political scientist at George Washington University, points out in a post on The Monkey Cage blog, while the vow to "repeal and replace" the health care law is potentially great for fundraising and exciting the Republican grassroots, it's another thing entirely to actually repeal the law.

"... To do real damage to the future of health care reform, Republicans need to hold the House, and win the White House and (presumably) with it, the Senate. Even then, however, they will find it hard to repeal and replace, assuming that Senate Democrats exploit an effective filibuster against any such effort to deny the GOP the 60 votes they would need to succeed via the regular legislative process. My hunch is that today's decision will be critical in bolstering Senate Democrats' backbone to defend the law, even if they were to find themselves in the minority. Because most of the law's popular insurance coverage protections kick in only in 2014, the window of opportunity for the GOP will be widest in 2013. After 2013, the GOP's road to repeal would get even steeper."

If Democrats had an effective response to the charge that the health care law represented a big new tax, they were mostly keeping it under wraps Thursday.

Not that they weren't obviously overjoyed to be validated by the Supreme Court.

Even as Republicans tried to paint them as tax-and-spend liberals, Democrats framed the Republican reaction to the decision as another example of Republicans siding with corporate interests like insurance companies over people. And they framed their own defense of the law in popular terms likely to be heard from here to Election Day. The House minority leader, Rep. Nancy Pelosi of California, trotted out a few during a press conference after the ruling.

"We're here to act on our beliefs. A belief that many of us had is that health care is a right, not a privilege in our country. We believe that a health care bill needed to be passed so that families would not be pauperized because they had a diagnosis or an accident that heaped health care costs on them."

How this will all play out politically is no more knowable than the Supreme Court decision was to outsiders before Thursday.

One of the greatest unknowns right now is if the high court's ruling will significantly change the public's opinion of the health care law. Until Thursday, numerous polls indicated a majority of voters opposed the law.

The court's seal of approval could help change that sentiment and if so the political calculus around the still controversial legislation. But all that remains to be seen.