Accessibility links
Roberts' Ruling Recalls Other Moments When High Court Shocked The Nation : It's All Politics Time and again, the court has shaken up American politics with pronouncements no one quite expected, from the rejection of "separate but equal" schools to the striking down of bans on gay sex. And the effects of a landmark decision may only be revealed over time. 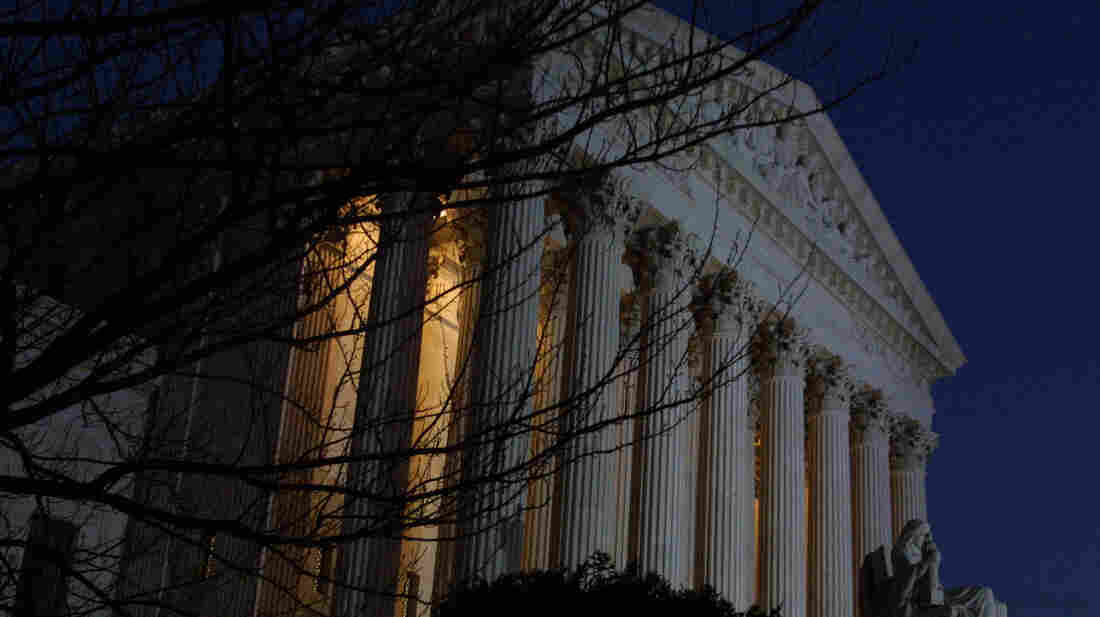 The U.S. Supreme Court on the eve of a hearing about the Florida presidential election recount, Nov. 30, 2000. The justices later ruled 5-4 in the case of Bush v. Gore, effectively deciding the outcome of the presidential race. Alex Wong/Getty Images hide caption 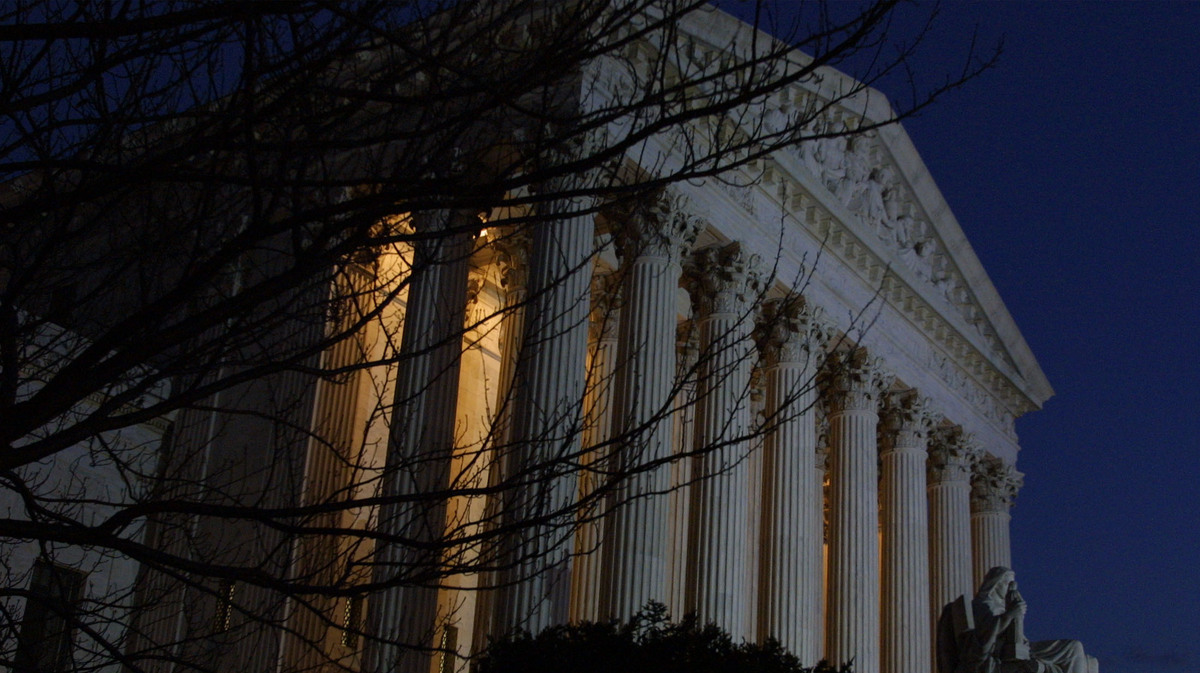 The U.S. Supreme Court on the eve of a hearing about the Florida presidential election recount, Nov. 30, 2000. The justices later ruled 5-4 in the case of Bush v. Gore, effectively deciding the outcome of the presidential race.

You may already have made a mental note as to where you were when you heard the Supreme Court had upheld the health care law known as Obamacare. It's one of those moments that become touchstones of our memory, personal connections to the history we have witnessed in our lifetimes.

The Supreme Court may not be the source of such moments very often, but when its rulings reach this level of our awareness, they alter the course of our lives.

Of course, no one knows yet just how history will deal with this particular law. Will Thursday's decision fashioned by Chief Justice John Roberts lead the public to re-examine a law that polls have shown to be a loser? Or will a voter revolt like that of 2010 doom President Obama's re-election chances?

And how will the imprimatur of the high court affect acceptance of the various provisions?

Such uncertainty, too, is typical of legal history. The effects of a landmark decision may only be revealed over time. But that does not make the decision itself any less momentous.

In recent decades, there have only been a handful of cases of comparable impact at the time of their announcement.

-- The Citizens United case of 2010 that allowed independent political expenditures without limits by labor unions and corporations reversed assumptions about campaign spending that had been features of federal and state laws for a century.

-- In 2003, in Lawrence v. Texas, the court by a vote of 6-3 reversed generations of legal and social presumption in decriminalizing certain forms of sexual activity — in essence lifting the legal ban on homosexuality. For those whose lives were dramatically changed, these decisions, too, belong in the category of momentous.

-- Perhaps the most reverberating thunderclap from the high court in our time came in December 2000, when the court ruled 5-4 in the case of Bush v. Gore, in effect ending five weeks of legal and political wrangling over the presidential election of that November. The case was arresting not only because the court was choosing the nation's chief executive, but also because it was superseding the internal process of a single state to do so.

Initially, state officials in Florida had awarded that state's crucial delegates to George W. Bush, making him president-elect on election night. But only a few hundred votes separated the candidates statewide, and many votes were in dispute.

An effort at a partial recount had found traction in the Florida courts — all the way to the Florida Supreme Court. The 5-4 ruling from the Supremes put a stop to that. Bush became the first president since the 1800s to enter the White House despite losing the national popular vote.

-- There were several stunning decisions by the Supreme Court during the presidency of Richard M. Nixon, the last of which led to his resignation.

In the spring of 1974, Nixon was fighting impeachment and a criminal investigation. Both stemmed from the White House cover-up in the Watergate affair (a botched burglary at the Democratic Party headquarters by operatives of the president's 1972 campaign).

A special prosecutor was seeking access to tape recordings from the White House that were relevant to the case. The administration tried to protect these by arguing that the president had "an absolute, unqualified privilege of immunity from judicial process under all circumstances." That claim reached the Supreme Court, which had just taken a turn to the right with the arrival of conservatives appointed by Nixon himself. In a decision that shocked many, the court voted 8-0 to order the tapes released. With impeachment looming and a criminal indictment quite possible, Nixon resigned 15 days later.

-- In the year before the Watergate blockbuster, the high court issued the one ruling that still brings thousands of protesters to Capitol Hill each year to mark its anniversary. The case was Roe v. Wade, and it arose from a single woman's lawsuit in Texas growing to represent the right of all women nationally to have an abortion in the first three months of a pregnancy. Several states had already liberalized their abortion laws at the time, but most still prohibited the practice, and in Texas it was a felony to perform an abortion (unless it was done to save the life of the mother).

Given the state of the law at the time, it was beyond many Americans' comprehension when they woke up in January 1973 to learn the court had ruled the Texas law unconstitutional. By implication, abortions were legal in all 50 states. The court ruling was 7-2, and just as stunning, the decision was rooted in a "right to privacy" the justices had found implicit in the Constitution itself. This became the ultimate example of "judicial activism" for a generation of social conservatives.

-- The 1966 ruling in Miranda v. Arizona was a head-spinner for many Americans, and the phrase "Miranda rights" remains a staple of TV police procedural programs to this day. In this case, the court led by Chief Justice Earl Warren solidified the reputation for defending criminal rights it had established in Gideon v. Wainwright three years earlier. Gideon put real teeth in a defendant's right to legal counsel, and Miranda required that defendants be advised of their full legal rights before being questioned by police.

-- Even today, one hears references to the Supreme Court banning school prayer in language that suggests it happened quite recently. In fact, the most famous school prayer cases came a half-century ago, when in Engel v. Vitale (1962) and Abington School District v. Schempp (1963) the high court established a prohibition on state-sponsored prayer in the schools.

There have been several modifications since, especially as pertains to school-sponsored activities outside the classroom. But the central element of these cases, the ban on state involvement in the promulgation of a given religious outlook, has shown remarkable staying power despite frequent assaults from religious activists and other opponents.

-- The 1962 ruling in Baker v. Carr was hardly the subject of dinner table conversation in the average American household, but it was about to alter the average American legislature and change its decision-making radically. Until this case, the typical state legislature apportioned seats in its lower chamber according to population (each district with roughly the same number of constituents) but allocated Senate seats according to counties (or another comparable source of geographical line-drawing).

Under one such scheme, California apportioned one Senate seat to a remote mountain county with a few thousand residents and one to Los Angeles County — home to a few million. The inequity had been controversial for generations, but defenders could always say the states were emulating the example of the U.S. Senate, where each state had always had two seats — regardless of population. With this case, the court put an end to that analogy and set the stage for the "one man, one vote" principle enunciated the following year in Gray v. Sanders.

-- But the granddaddy of all Supreme Court shockers in our era was the case that set the stage for the civil rights movement of the 1950s and 1960s, with immeasurable results for the society as a whole. The case was Brown v . Board of Education, which emerged from a lawsuit against the schools of Topeka, Kan., in 1954. The court reversed a precedent more than a half-century old that had declared "separate but equal" schools acceptable under the "equal protection" clause of the Constitution.

Brown held that segregated schools were inherently unequal, as indeed generations of practical experience had proven. Beyond schools, the case provided the impetus for gradual desegregation of other public accommodations over the decades to come.