Accessibility links
Did Roberts Flip On The Health Care Decision? : It's All Politics Since the Supreme Court's health care ruling — in which Chief Justice John Roberts provided the key vote to uphold most of the law — speculation has raged about whether he changed his mind in the course of deliberations. In many ways, the question of a switch misperceives how the court works.

Listen
Did Roberts Flip On The Health Care Decision? 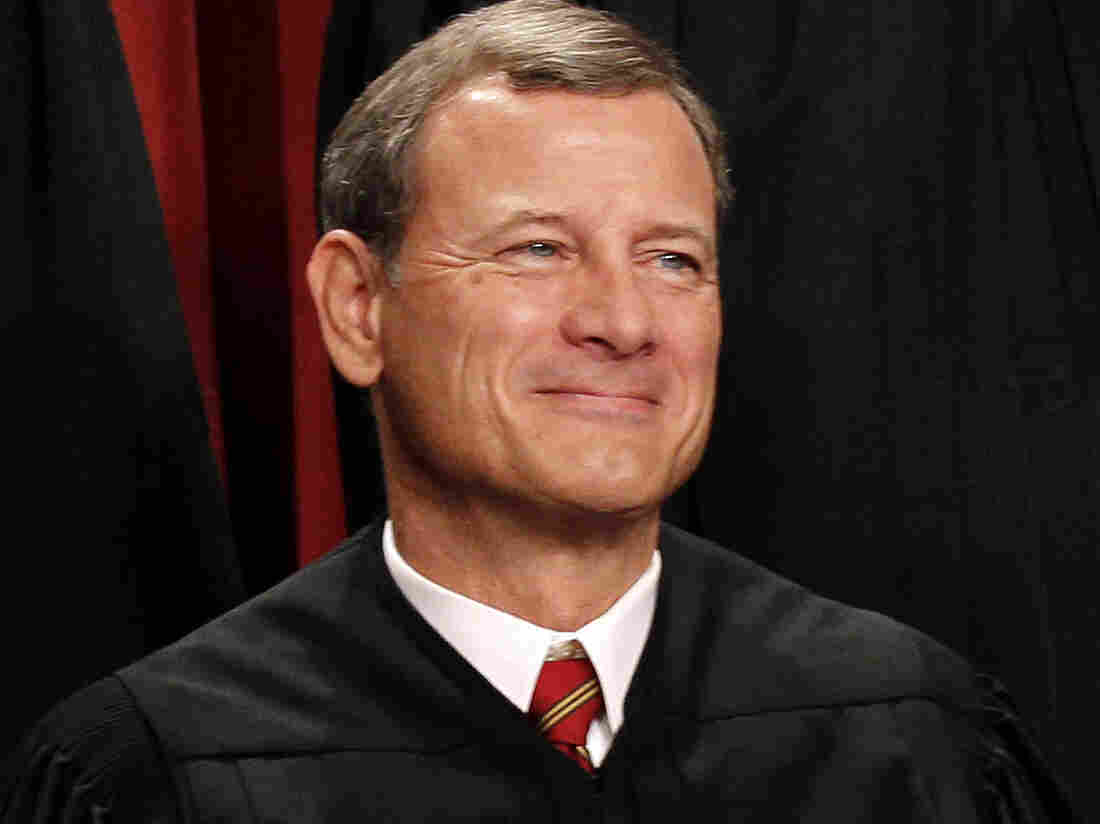 Since the Supreme Court's health care ruling, there's been a lot of speculation about whether Chief Justice John Roberts changed his mind during the course of deliberations. Pablo Martinez Monsivais/AP hide caption 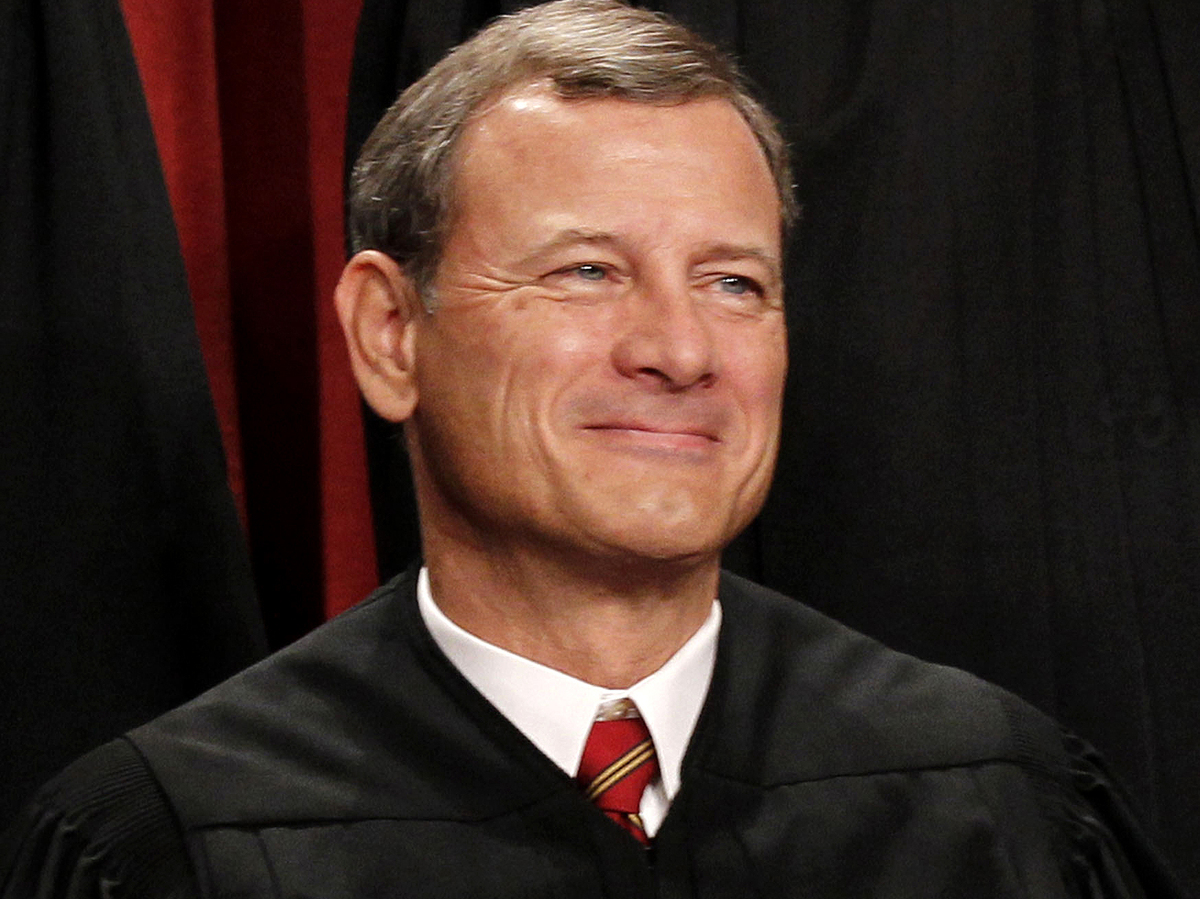 Since the Supreme Court's health care ruling, there's been a lot of speculation about whether Chief Justice John Roberts changed his mind during the course of deliberations.

In the days since the Supreme Court's historic health care ruling, there has been a good deal of speculation about whether Chief Justice John Roberts changed his mind in the course of deliberations, deciding late in the game to uphold the constitutionality of most of the law.

Even before the decision was announced, conservative writers railed that liberals and the so-called mainstream media were trying to intimidate the chief justice.

To cite just two examples: After President Obama expressed "confidence" in April that the court would uphold the law, Sen. Mike Johanns, R-Neb., accused the president of "threatening" and "intimidating" the court. And Randy Barnett, the legal architect behind the challenges to the law, accused liberal commentators of trying to "intimidate or threaten the Court with dire political consequences should it fail to uphold legislation that they strongly favor."

After the decision was announced, showing Roberts as the fifth and deciding vote to uphold the individual mandate under Congress' taxing power, many conservatives began claiming that Roberts switched his vote midway through deliberations — a charge now backed by a CBS report that Roberts changed his mind.

The question of a vote switch in many ways misperceives how the Supreme Court works. The justices take an initial vote right after the case is argued. If the chief justice is in the majority, he assigns who will write the opinion. Roberts did that, and assigned the majority opinion to himself, as one would expect for such a major decision.

It is not uncommon for a justice to change his or her views as the opinion drafts are circulated. Usually, it is not the opinion writer who vacillates, but there are many famous cases of an opinion writer starting out in one direction and ending up in another.

In the 1992 abortion case Planned Parenthood v. Casey, for instance, the initial vote in conference was, in essence, to reverse Roe v. Wade. But three justices eventually coalesced around an opinion to uphold what they called "the core of Roe," while partly trimming it back. And those three, coupled with the two justices who voted to uphold Roe entirely, composed the majority.

In another case, Lee v. Weisman, which tested the constitutionality of a prayer at a public school graduation, Justice Anthony Kennedy initially voted to allow the practice and was assigned to write the opinion for the five-justice majority. But as Kennedy later told his colleagues in a memo, his "draft looked quite wrong." He changed his mind, and ended up writing the opinion for a different five-justice majority, holding the practice unconstitutional.

This term's health care case had many more moving parts than most cases. The question of the mandate was just one of many the court had to address. After doing more than a dozen interviews, most off the record, I think it is fair to say that from the beginning, there were five votes, including Roberts', for the proposition that the Commerce Clause of the Constitution could not support the mandate. More ambiguous, however, was where Roberts stood on the question of whether the mandate could be upheld under Congress' taxing authority — a question that clearly interested him during oral arguments.

Since the announcement of the court's decision last week, conservatives have been pushing the notion that Roberts did something of a last-minute flip. But the evidence to support that is less than convincing.

For example, writers have noticed that the four dissenting conservatives call Justice Ruth Bader Ginsburg's decision "the dissent," when in fact she was among the five-justice majority that voted to uphold the law. But the first reference to the Ginsburg dissent by the conservative minority refers to her dissent from the chief justice's opinion on the Commerce Clause. She and the court's three other liberals would have upheld the mandate as a legitimate exercise of Congress' commerce power. On this point she was writing a dissent.

The question remains: Did Roberts change his opinion at some point after the first conference on other questions, including the taxing power? I think there is a kernel of truth to the notion that he did, but again, these things are not like legislative votes. If, as seems likely, Roberts was somewhat ambiguous about his views on the taxing power, after mulling over the issue, talking to colleagues, it seems clear that by the time he circulated his first draft, probably sometime in May, he was not ambiguous. At that point, the court's four conservatives realized they had lost, and they were probably quite angry.

Justices are human, and when there is a big, historic case where there is the press of time, like this one or Bush v. Gore, there are hard feelings in the immediate aftermath.

What is unusual here is the apparent attempt to undermine the chief with a leak more typical of political combat.

Nobody knows definitively who the source of the leak is. But the CBS reporter whose story was based on the leak, Jan Crawford, is well-liked by conservatives. She reported that she had two sources "with specific knowledge of the deliberations." That could be a law clerk or a justice's spouse, or even a justice. Or maybe someone else at the Supreme Court.

Regardless, what is amazing is that this sort of fight has gone public, at an institution that is usually impervious to leaks. It's even more amazing that the leak was targeted in a way that is clearly meant to detract from the good reviews the chief justice was getting in many quarters — and not just liberal quarters.

After the decision, Roberts got a lot of credit for finding a way to keep the court out of the partisan fray, avoiding a decision along party lines, while at the same time setting down some new, and for liberals, troubling markers limiting congressional power in the future.

Indeed, liberals have worried aloud about what the future holds, based on those markers. But there is precious little liberal hand-wringing about the fact that two of the court's liberals — Stephen Breyer and Elena Kagan — joined Roberts and the conservative majority in concluding that the Medicaid expansion was too coercive.

In contrast, many conservatives, particularly movement conservatives, see Roberts' conduct as an act of incredible betrayal. From Rush Limbaugh to The Wall Street Journal editorial board, to former Bush officials John Yoo and Marc Thiessen, there is a fury at the chief justice for, in essence, being more loyal to the Supreme Court as an institution than to an ideology.