Accessibility links
Jobs Report And Politics: The Monthly Spin Cycle : It's All Politics It's become a pattern: On the first Friday of the month, the Labor Department issues a disappointing economic report. Republicans cite it as proof of President Obama's failed policies. The White House urges everyone to focus on the glass half full. And both sides miss the broader picture. 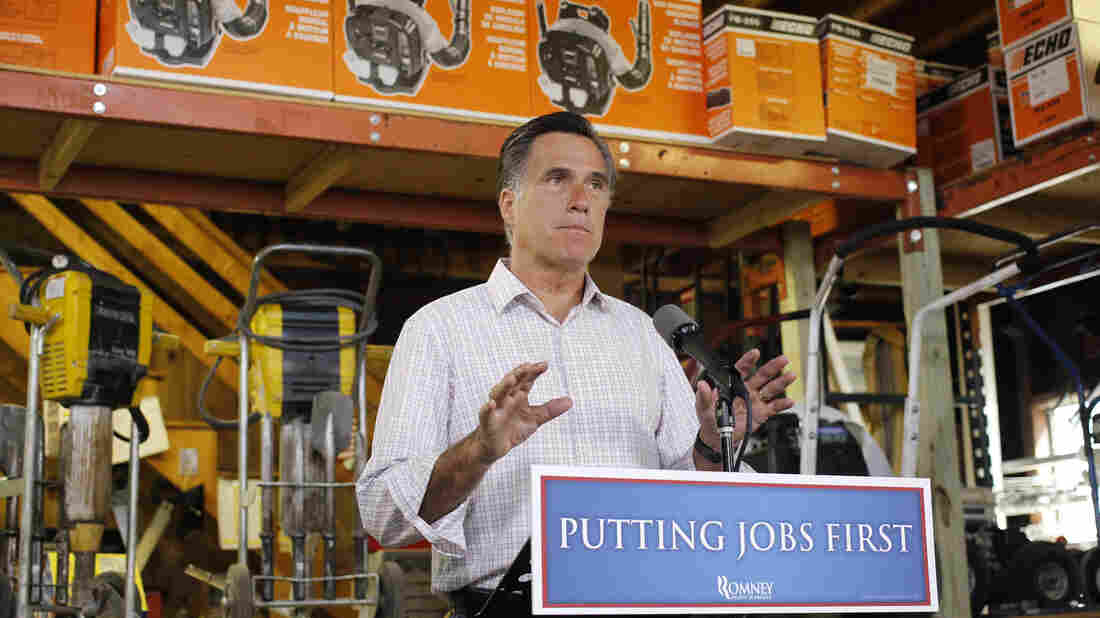 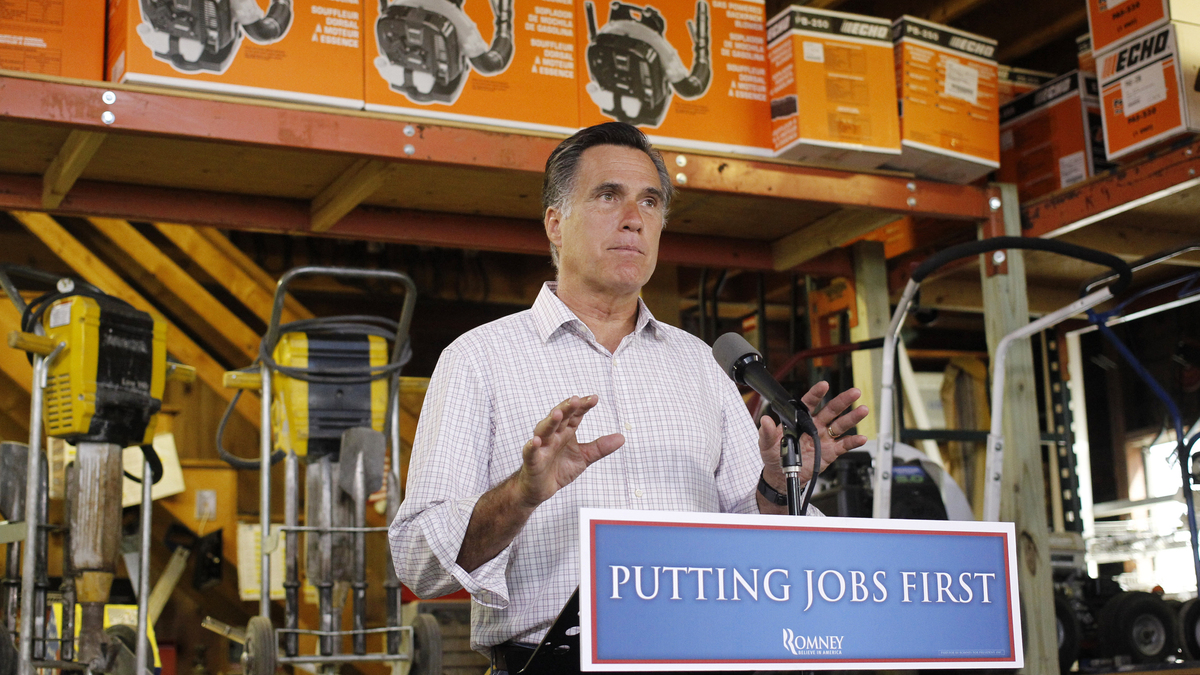 Like any Oval Office incumbent seeking re-election, President Obama would prefer to have the economy exceeding expectations in terms of job creation at this point in the campaign.

But exactly four months from Election Day, the economy isn't cooperating. In fact, it's doing just the opposite, underperforming job-growth forecasts in recent months.

Given the trend, it seems unlikely the four monthly jobs reports to be issued between Friday and Election Day will change the pattern in which our politics now seem trapped:

The Labor Department issues a disappointing report on the first Friday of the month. Republicans quickly seize on it as proof of Obama's allegedly failed economic policies. White House officials and other Democrats urge everyone to focus on the good news in the reports, that there is indeed net job creation, though not nearly enough to drive down significantly the jobless rate.

That pattern was on display Friday, with Republican Mitt Romney taking a break from his Wolfeboro, N.H., vacation to tell reporters that the June numbers were a "kick in the gut."

Meanwhile, campaigning in Poland, Ohio, Obama said the more than 80,000 jobs created in June was a "step in the right direction." 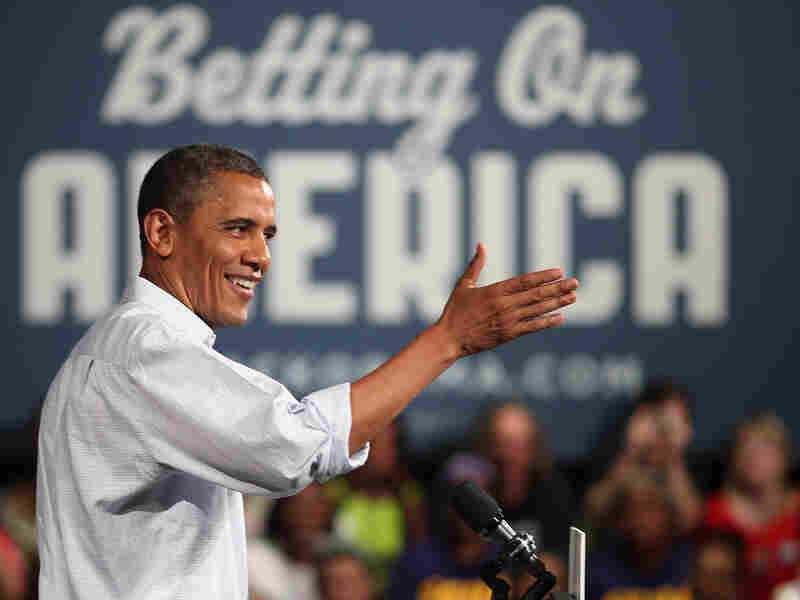 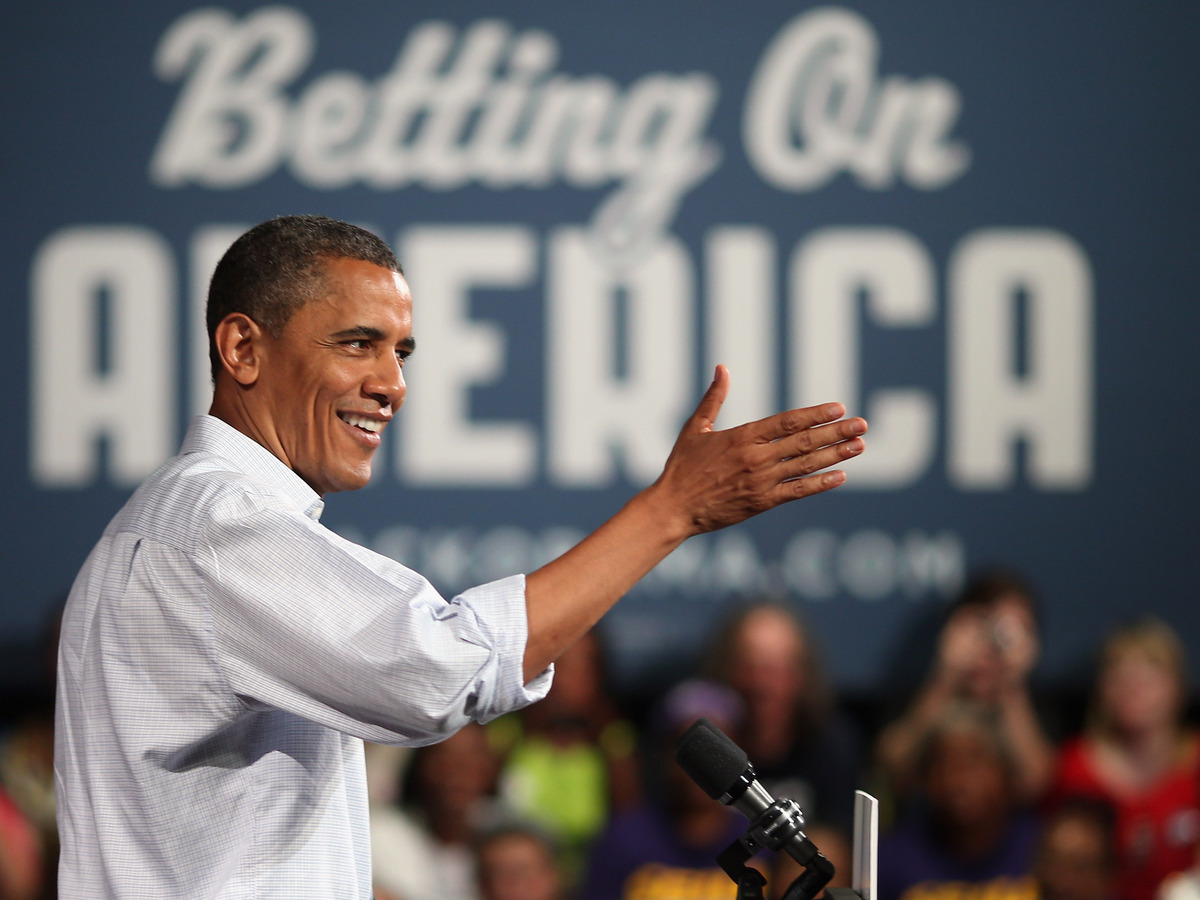 Despite the political spin that gets ginned up at this point every month, the jobs reports aren't exactly telling us much of anything new about the economy. All indications are that the economy is stuck in a lower gear than is needed to create jobs for the millions who are out of work, which is certainly bad news. But the data suggest that the economy isn't in reverse, either.

"This pace of job growth means two things," writes Heidi Shierholz, an economist with the liberal Economic Policy Institute, who says the U.S. economy has a deficit of 10 million jobs: "We are not in — nor are we slipping into — another recession, but neither are we getting the kind of job growth that will bring down the unemployment rate. In other words, the labor market is treading water. This would be perfectly fine if we were at full employment, but with the unemployment rate now above 8 percent for 41 months straight, this is an ongoing, severe crisis for the American workforce."

Conventional wisdom has it that it's a crisis for the president, too. It's repeated quite often that since 1960, there have been four presidential elections featuring incumbents in which the unemployment rate has topped 7 percent: 1976, 1980, 1984 and 1992. And only in 1984 did the incumbent, Ronald Reagan, keep his job.

With that history and the jobless rate now at 8.2 percent, it would seem Obama would be poised to see his "one-term proposition" come true.

But it's important to keep in mind that other factors arguably played as great if not greater roles as the unemployment rate in the incumbents losing. (Last month at this time, The New York Times' Nate Silver weighed in with data on the "complicated and tenuous" relationship between unemployment rate and an incumbent's re-election prospects.)

In 1976, President Gerald Ford was hurt by his pardon of Richard Nixon.

In 1980, President Jimmy Carter was damaged by a primary challenge by Sen. Ted Kennedy.

And in 1992, H. Ross Perot's third-party bid pulled votes away from President George H.W. Bush and allowed Bill Clinton to win with just 43 percent of the popular vote.

So there may be less than initially meets the eye in drawing a correlation between high jobless rates and incumbents losing their jobs.

Still, the lackluster economic growth and job creation are considerable forces propelling Romney's candidacy. Romney has made the economy's underwhelming performance — which he blames on Obama — the crux of his argument for why a change is needed in the White House.

And there's nothing on the horizon that suggests that Romney will be forced anytime soon to shift strategy. If anything, the slowdown of economies in Europe and China suggest the situation may get even worse for the U.S. economy before it gets better.

While Obama certainly can't do much about the global economy's impact on the U.S., he can direct voters' attention to successes on the jobs front, as he's done during his bus tour in Ohio this week.

In that critical battleground state, with many companies that supply the auto industry, Obama made sure to repeatedly cite his actions to save the U.S. auto companies while reminding his audiences that Romney argued against such moves.

Then there's this. Obama has repeatedly shown that it's a mistake to "misunderestimate" him, as his White House predecessor might have said.

At nearly every turn in his political career, he has wound up humbling his doubters. Winning a statewide race in Illinois as an African-American from Chicago with the name Barack Obama. ("People downstate will never vote for him" some of us said.) Wresting the Democratic presidential nomination from the far-better-known Hillary Clinton. Signing health care legislation into law. All these were once thought to be impossible. He has shown a resilience and political wiliness that has often left his opponents wondering what happened.

Whether he will be able to once again defy political gravity remains to be seen. But Obama has proved that betting against him is no sure thing.