Accessibility links
In Ohio, Obama Seeks Middle-Class Mantle Romney's Team Would Deny Him : It's All Politics Campaigning in Ohio, President Obama leaned heavily on a new analysis of Mitt Romney's economic plan that concluded the Republican's proposal would mean higher taxes for middle-class families while lowering them for the superwealthy. 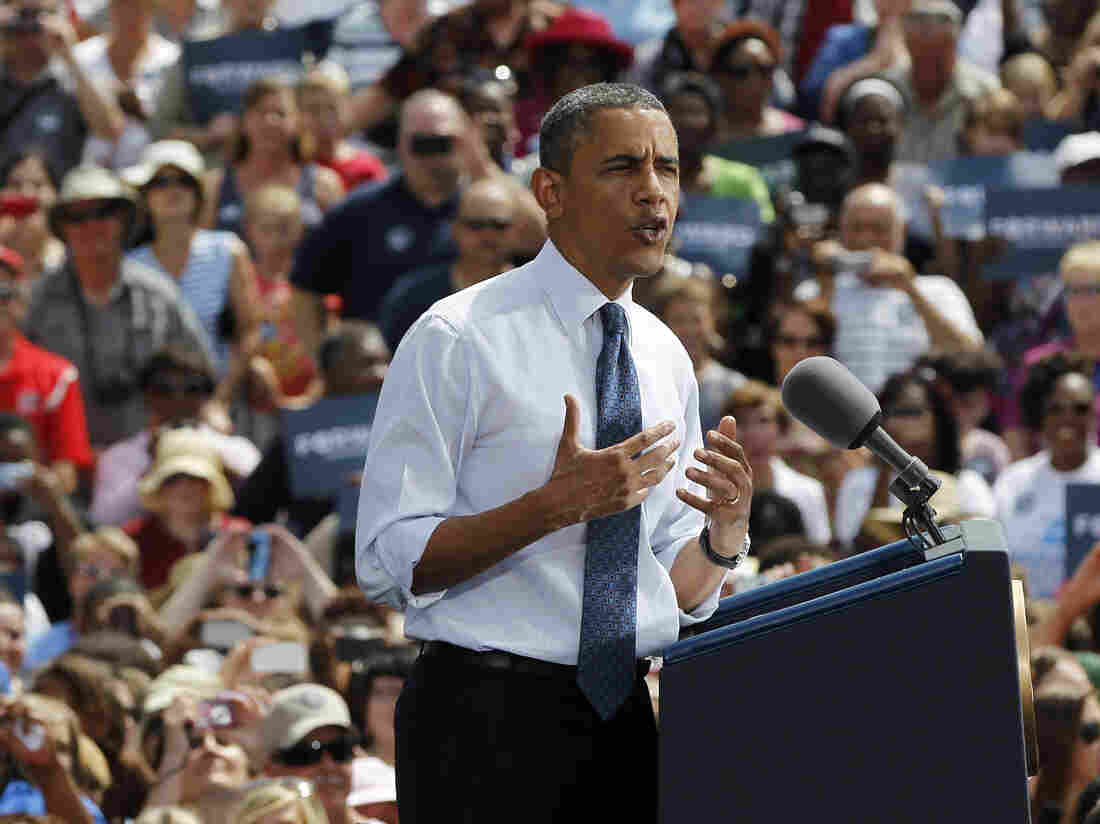 President Obama argued in Mansfield, Ohio, that he was the true defender of middle-class voters. Pablo Martinez Monsivais/AP hide caption 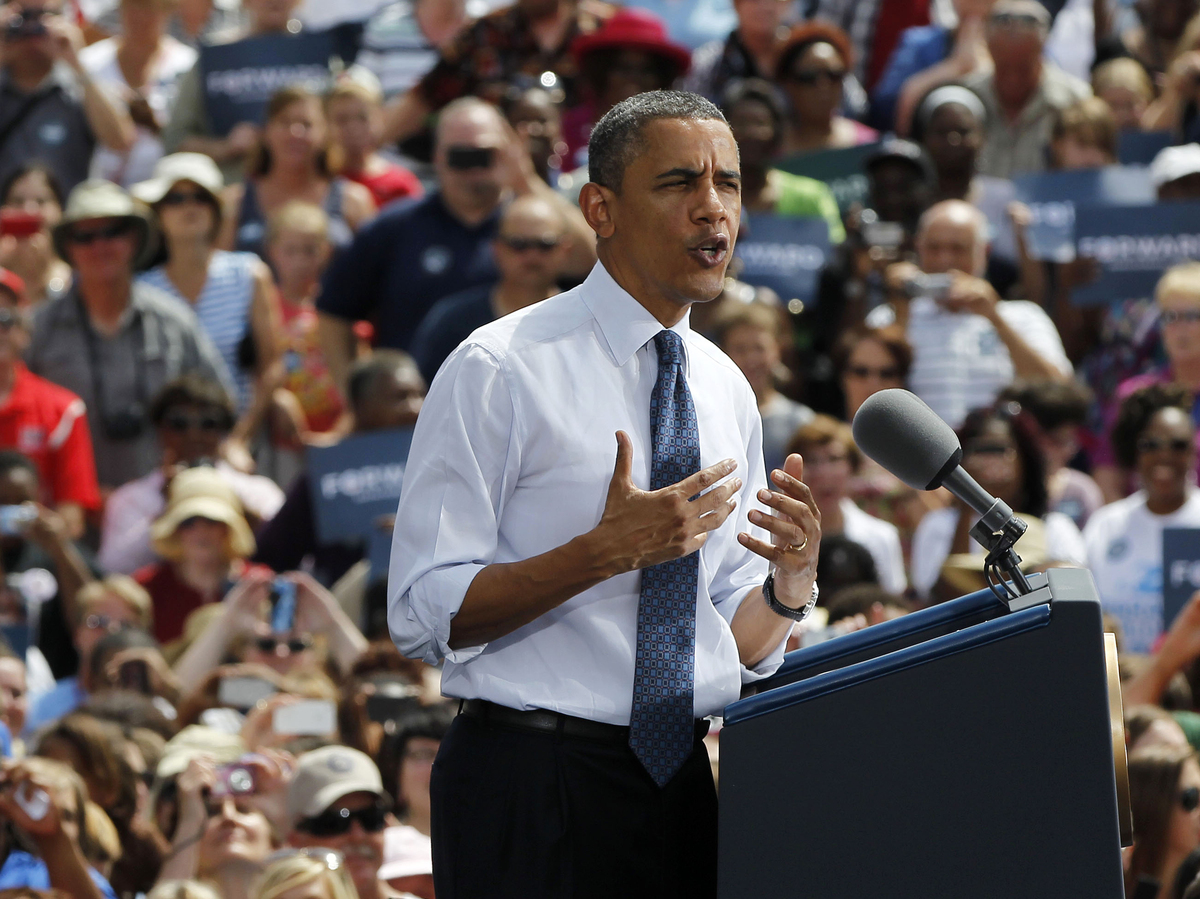 President Obama argued in Mansfield, Ohio, that he was the true defender of middle-class voters.

In Ohio on Wednesday, President Obama tried to make Mitt Romney the poster child for tax unfairness and the widening gulf between the middle class and very rich, wielding a new analysis of the Republican's fiscal proposals like a prosecutor with a fresh-in-hand grand jury indictment.

In Obama's latest visit to the battleground state, he argued that voters view the election as a choice between a president who is a defender of the middle class and a challenger who isn't.

The most recent Ohio polls either give Obama a slight lead or show the race as a statistical tie.

The new analysis at the heart of Obama's attack on Romney came from the Tax Policy Center, a joint project of two left-leaning think tanks, the Urban Institute and Brookings Institution.

Noting that the assessment came not from his White House aides but from what he characterized as "an independent, nonpartisan organization," Obama told the audience at a campaign event in Mansfield:

"Now, despite the evidence, the entire centerpiece of my opponent's economic plan is a new $5 trillion tax cut on top of the Bush tax cuts.

"Now, the bulk of this tax cut would go to the very top, a lot of it going to the wealthiest one percent of all households. Folks making more than $3 million a year, the top one-tenth of one percent, would get a tax cut worth almost a quarter of a million dollars.

"Now, think about that. Folks making $3 million or more a year would get a quarter of a million dollar tax cut. But listen, it gets worse. Under my opponent's plan, who do you think gets the bill for these $250,000 tax cuts? You do!

Then Obama reminded his listeners that Romney — and Obama himself — are among the wealthy who would benefit the most from the proposed tax cuts:

"That's the choice in this election. That's why I'm running for a second term as president of the United States. Mansfield, I've got a different plan for America than Mr. Romney's."

Obama's message seemed aimed at underscoring what polls have indicated — that voters feel he understands them more than Romney does.

Romney's campaign rejected the president's characterization of its candidate's plan as well as the Tax Policy Center analysis.

A Romney campaign official questioned the objectivity of the analysis since one of its authors, Adam Looney, worked in the Obama administration as a staffer on the Council of Economic Advisers and in the Treasury Department.

In fairness, another of the authors, William Gale, was a staff economist on the Council of Economic Advisers during the first Bush administration. Also, Romney's campaign itself called the TPC "nonpartisan" in a November news release to pass along criticism that then-presidential candidate Texas Gov. Rick Perry's economic plan would raise the tax burden on middle-class income earners.

The Romney campaign on Wednesday persisted in trying to drive home the message that the contest was really a referendum and, as such, Obama deserves to be booted from office as a failure.

Romney's campaign counterprogrammed Obama's visit with two ads — one that showed a man identified as Al Zarzour, a former GM dealership owner in Lyndhurst, Ohio, who was put out of business by GM. The ad links Zarzour's plight with the federal bailout of the U.S. auto industry.

Indeed, Romney wasn't the only conservative who at the time of the auto bailout called for U.S. automakers to go through the bankruptcy process as a way to strip them of financially untenable commitments to the car makers' constituencies, including retirees and dealers.

In a piece for the Heritage Foundation, a right-leaning think tank, Andrew Grossman wrote in 2009:

"According to industry analysts, General Motors needs to shed nearly 5,000 dealers from its network and eliminate five or six of its eight domestic brands. Without these changes, the company will be unable to compete with the likes of Toyota and Honda, which focus their energies on fewer brands and sell far more cars per dealer. Ford and Chrysler face the same problem.

"Making these changes outside of bankruptcy, however, would likely prove impossible. Automobile dealers wield enormous political clout at the state level and have succeeded in winning passage of tough pro-dealer 'franchise' laws in all 50 states. These laws make it slow and prohibitively expensive for an automaker to modernize its dealership network and consolidate redundant brands. Automakers that are already on the brink of insolvency cannot afford the time and expense that reforming their sales operations under these laws would involve."

Besides the car dealer ad, Romney's campaign issued another video Wednesday called "Time for a Change," which also happened to be in the lyrics of the blues-tune soundtrack.

Against images of a down-on-its-luck Akron appears text, including, "Under President Obama's 'plan' 41 months of unemployment above 8%"; "473,000 jobs lost"; and "23 million Americans struggling for work."

The ad was the Romney campaign's way of "greeting" the president during his visit to Akron, his second Ohio stop.