Accessibility links
Texas' Biggest Loser In GOP Senate Race? For Rick Perry, The (Tea) Party's Over : It's All Politics The governor's choice for U.S. Senate, David Dewhurst, was bulldozed by Tea Party favorite Ted Cruz. The reversal in Perry's fortunes should chasten all who try to predict political outcomes. 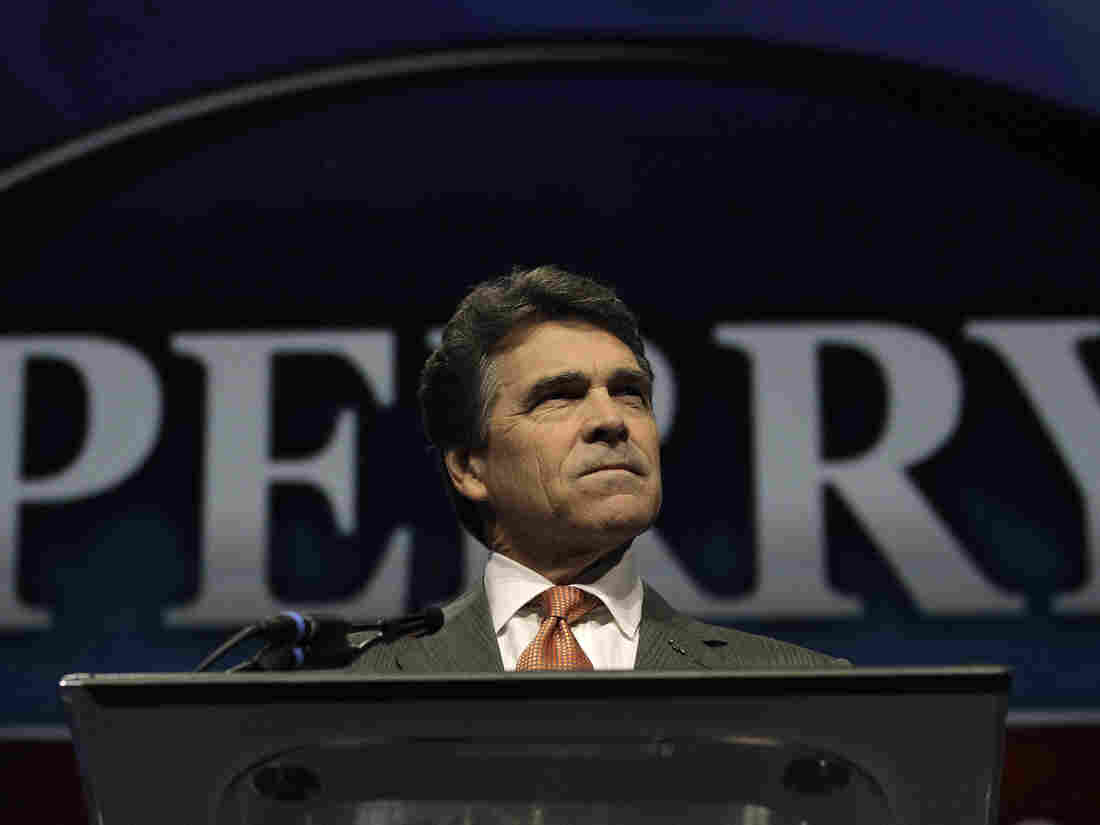 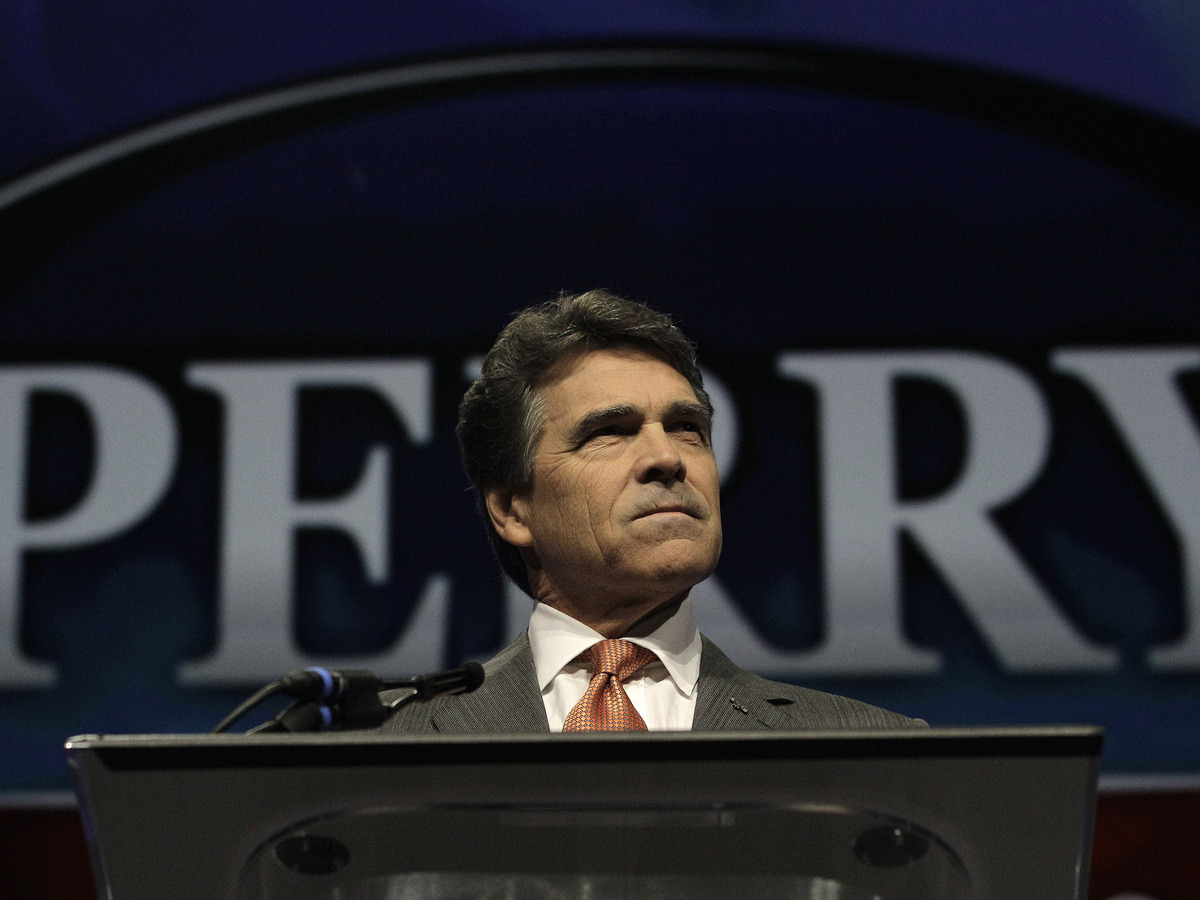 Gov. Rick Perry rules the roost at the Texas Republican Convention in Fort Worth on June 7. But his endorsement of Lt. Gov. David Dewhurst fell flat this week as Tea Party fave Ted Cruz crushed Dewhurst in a GOP runoff for U.S. Senate.

When Tea Party upstart Ted Cruz won the Republican nomination for the U.S. Senate in Texas this week, the only other candidate on the ballot was Lt. Gov. David Dewhurst. But Dewhurst may not have been the biggest loser in that contest. 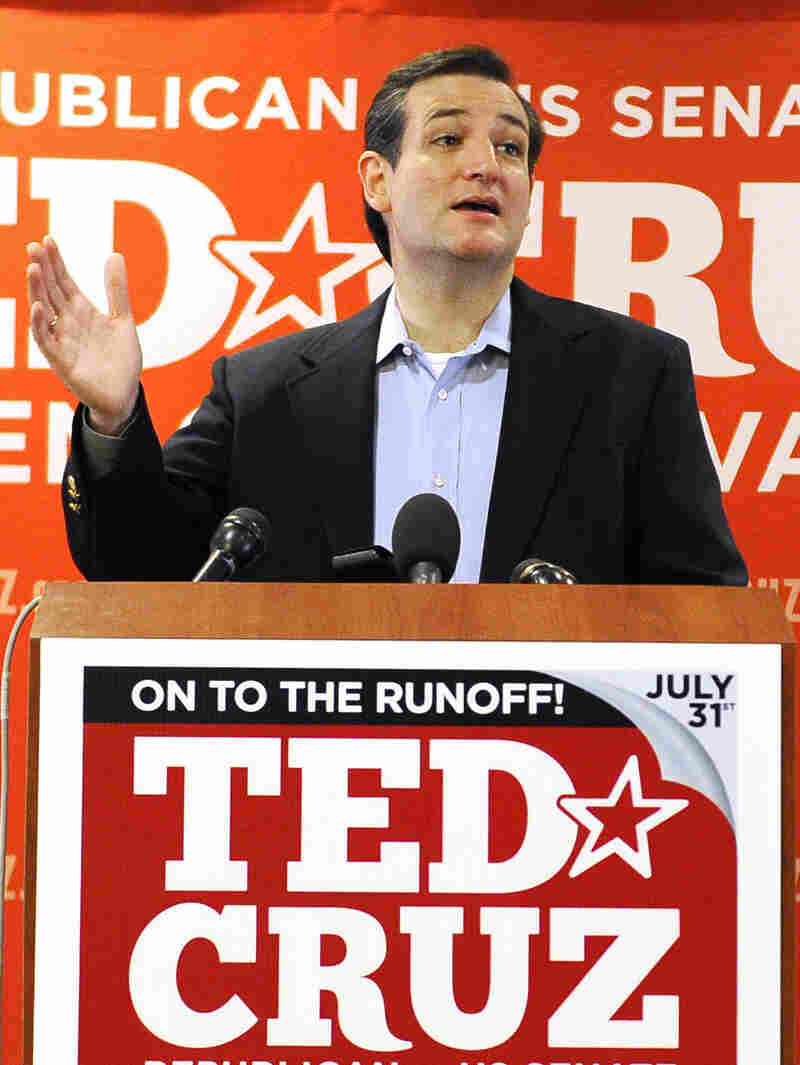 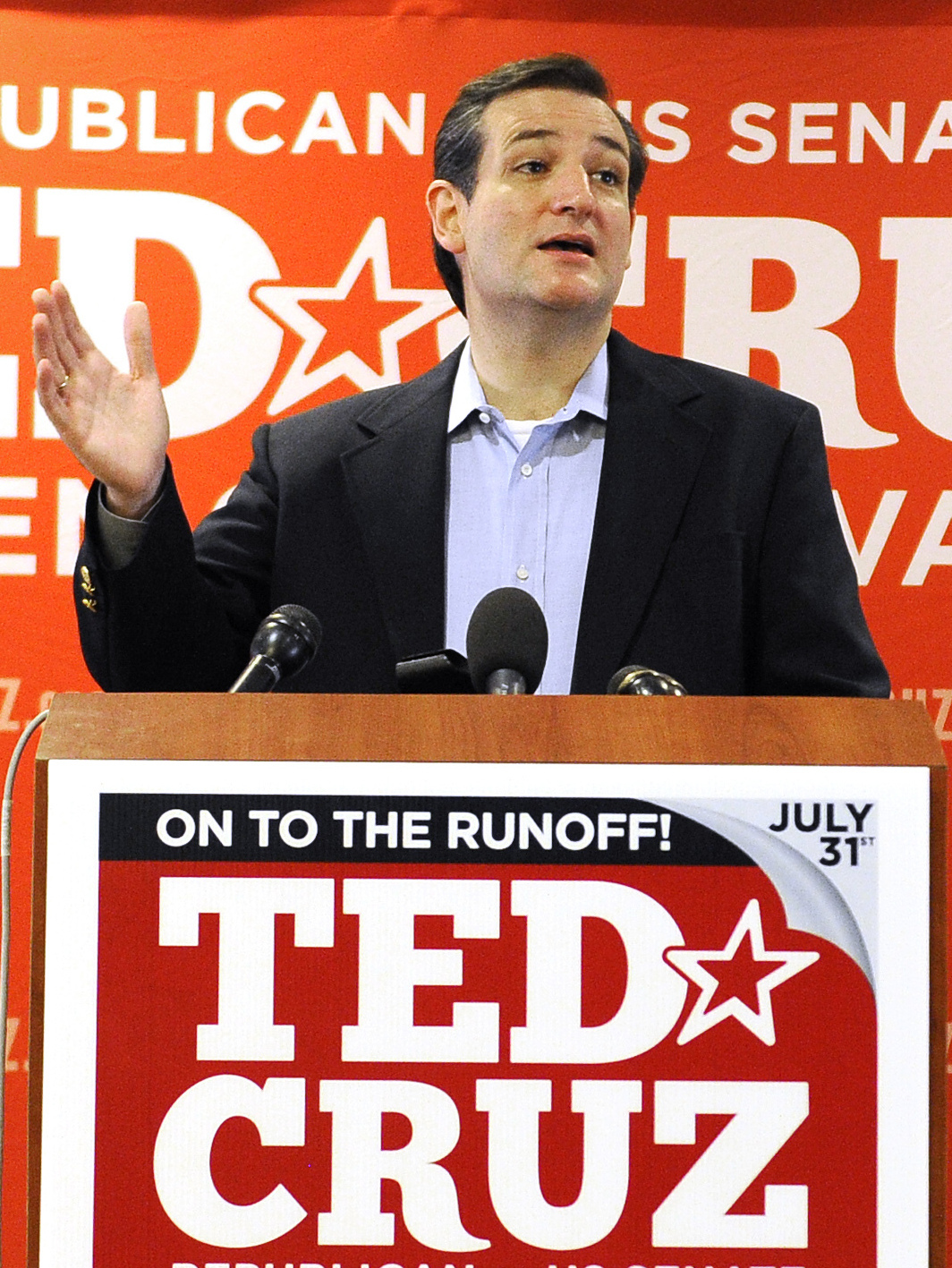 Dewhurst may still have a political future in Texas. But can the same be said of his boss, mentor and chief endorser, Texas Gov. Rick Perry? The man who dominated Lone Star politics and Republican presidential prospects just a year ago took another fearful drubbing in this primary — this time from his own folks.

Perry went all in for Dewhurst, hoping to promote his protege and repair his own tattered banner in the bargain. Pretty much the opposite was achieved by the walloping the Perry-Dewhurst machine took from Cruz, a former holder of a lesser statewide office.

It could be said that Cruz was less the winner here than the Tea Party movement, which brought in a variety of its stars (including Sarah Palin) and cast the runoff contest in terms of good-vs.-evil as stark as the Alamo.

Losing the Tea Party must be galling to Perry, who was once the movement's darling himself. Now the populist uprising on the right that elevated Perry over rival Sen. Kay Bailey Hutchison in the 2010 Texas gubernatorial primary — and momentarily preferred him for president in 2012 — has moved on to new heroes.

In fact, one late poll of Republican primary voters found Perry's endorsement was hurting Dewhurst more than it was helping him. And half of those polled said what Perry thought simply didn't matter to them, one way or the other.

Seeing the Perry stock plumb such depths this week made it difficult to believe it had soared so high just a year ago. Witnessing the reversal in his fortunes should chasten all who attempt to predict political outcomes.

Last August, as he prepared to announce his candidacy for the GOP presidential nomination, Perry was the undisputed master of Texas — setting a new record for longevity in the statehouse with every sunrise. More surprising was the sudden respect he commanded nationally.

Every national news organization dispatched a reporter to Austin to interview him. The coverage flattered him, much as a similar rash of writings had touted his predecessor, George W. Bush, a dozen years earlier.

Uncertainty about the Republican field at the time created an ideal opportunity for the telegenic Texan with the big booming statewide economy. Perry stepped onto the presidential stage as a leading man. One year ago this month, a mere news leak about Perry's planned announcement was enough to upstage Michele Bachmann's victory in the Iowa straw poll, depriving her of a media bounce she had counted on.

Within a few weeks, Perry was leading in the polls of Republican hopefuls and ahead of President Obama in trial heats. The early fundraising was phenomenal. Energy industry money poured in, as it has for Republican winners of the past. Many insiders and pundits proclaimed him the likely GOP nominee in 2012. Influential conservatives hailed him as the new convener of the Reagan coalition.

Perry's campaign released a long TV ad in general-election mode, as though there were no need to hold primaries at all. There was talk of his choices for vice president, his likely picks for the Supreme Court, and so on.

And then the fall debates began. Perry had a rough outing in the first, and an even rougher time in the second. In the third he set out to name three departments of the federal government he would abolish immediately, and couldn't remember the third. "Oops," he said.

In January he flopped in the Iowa caucuses. In March he would attend the Gridiron Club's annual dinner in Washington and sum up his candidacy this way: "It's the weakest Republican field in memory and every one of them kicked my butt."

That got a big laugh in March. But four months later, Perry is discovering that the kicking has not stopped. In his statement congratulating Cruz this week, Perry was unabashed in addressing the voters he sees drifting away.

"I call on all conservative Texans to rally behind Ted Cruz in November so we can remake the U.S. Senate in the image of Texas ... the most conservative state in America. Texas is as rock-hard conservative as ever. Texans in true Texas fashion decided what is right for Texas."

It seems safe to say this is one Texan who knows he has a problem in Texas.