Accessibility links
The Youth Vote 2012: Once Again, With Enthusiasm? : It's All Politics Young voters, who played a high profile role in the 2008 presidential race, are showing a relatively tepid response to the 2012 contest. But neither campaign is giving up on the historically hard to get demographic. 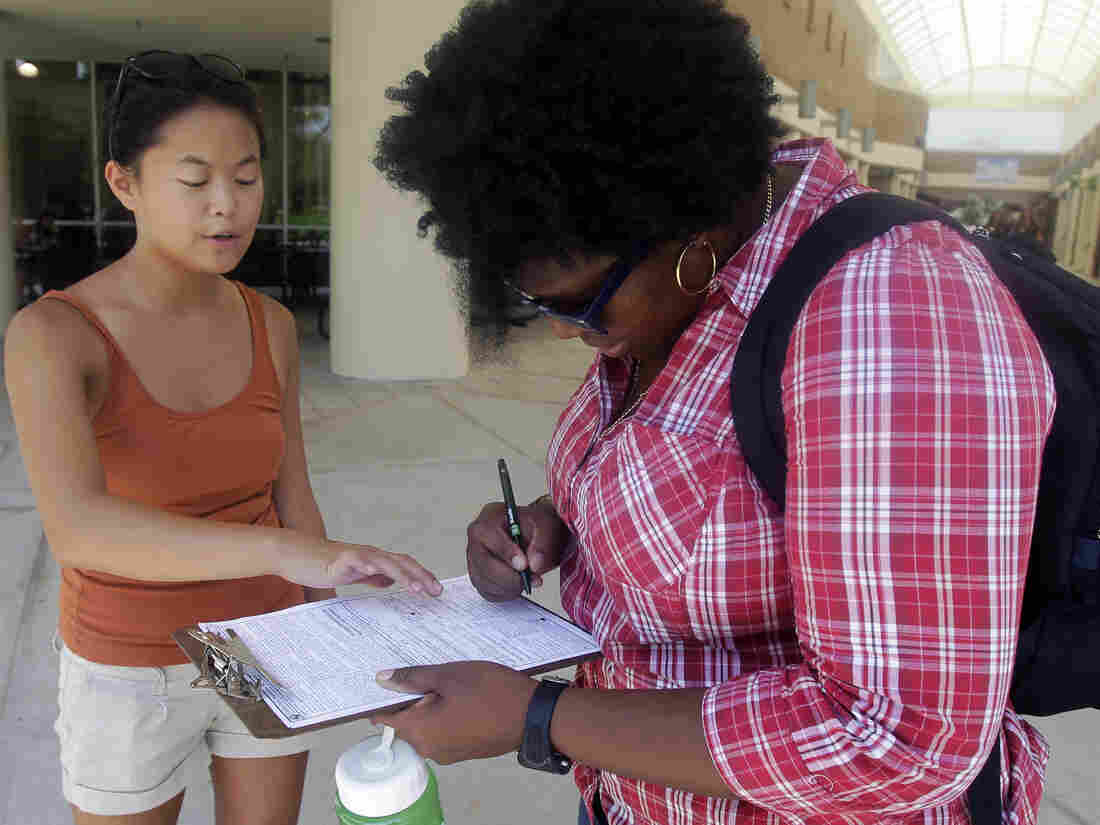 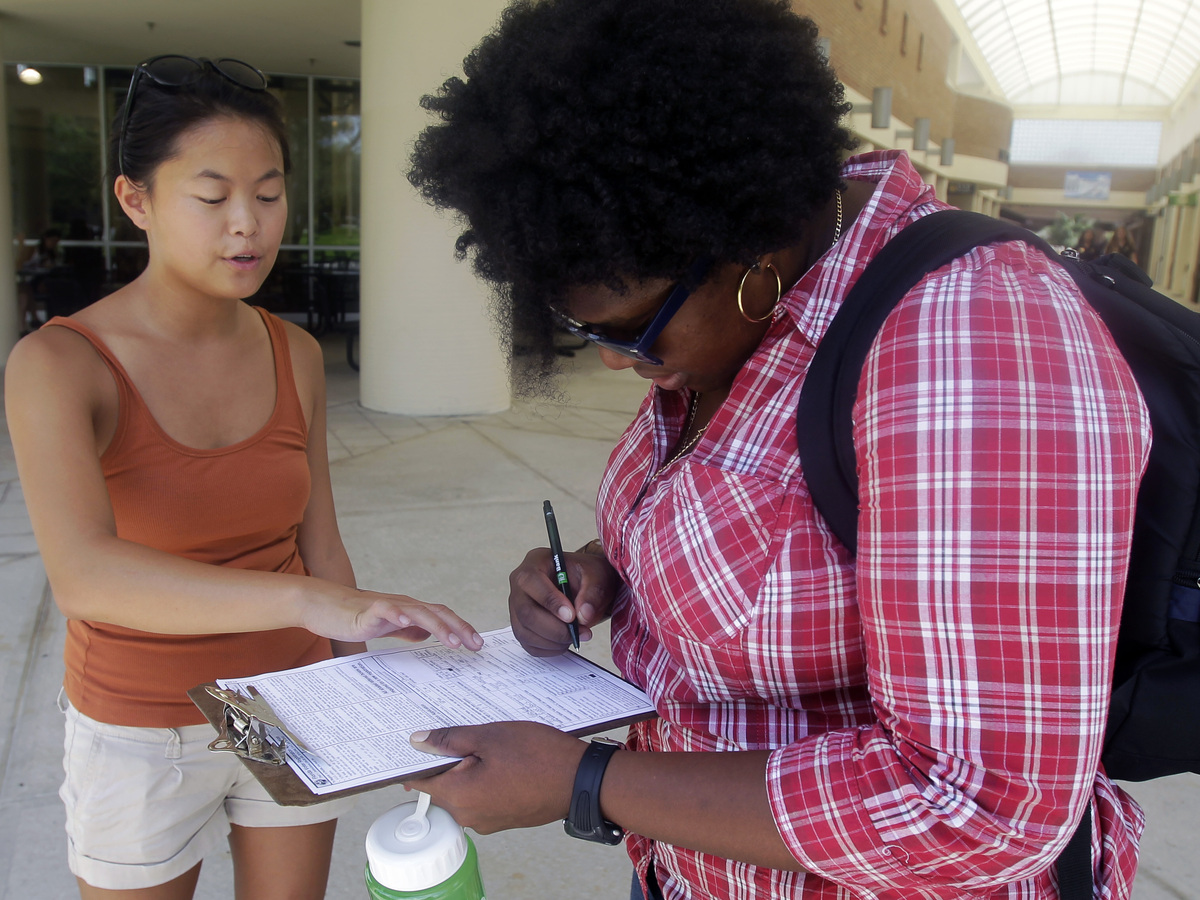 Aubrey Marks (left) helps a University of Central Florida student to register to vote in Orlando, Fla., on July 31.

Christina Sanders, who organizes young voters, has a message for those under-30 with political grievances: "There is no Superman coming."

Trying to convince members of the notoriously non-voting age-group to head to the polls on Nov. 6 for the presidential election, she tells them: "You are a part of the American system."

Sanders calls young voters the "missing link" in American politics, and a Gallup poll last month found that only 58 percent of 18-to-29 year olds say they intend to vote this year, by far the lowest "plan to vote" percentage of any age demographic.

And those who say they'll vote is typically much higher than actual turnout: About 51 percent of eligible voters under age 30 went to the polls in 2008, considered a strong showing for that group. Most of them — 66 percent, according to exit polls — voted for Barack Obama.

"Younger people are more susceptible to the trends that affect all voters," he says. "They get frustrated at lack or pace of change."

Obama's outreach to young voters was a big story four years ago. But polls show a relative lack of involvement in the political process this year among Americans under age 30.

Gallup notes that timing might have something to do with that. Young voters tend to become energized closer to the election, but "the data suggests young voters will not turn out at the same rate as in 2008, even if they show an expected increase in voting intention over the course of the campaign," finds Gallup.

Heather Smith, president of Rock the Vote, an organization dedicated to getting young people to the polls, says that "2008 was the year of the youth vote."

But she notes that the Obama campaign then made an early investment in the demographic. Now, polls indicate that support for the president, while still strong among young people, has waned. A Hiram College poll last month showed that 50 percent of those 18 to 29 surveyed said they support Obama; 37 percent said they favored Mitt Romney.

Not that either campaign is taking the young vote for granted. Obama initiated his campaign with rallies at Virginia Commonwealth University and Ohio State University back in May. He's also made stops at universities in the battlegrounds of North Carolina, Colorado and Iowa.

Romney has made multiple appearances before college audiences, fielding questions from students at Bradley University in Illinois, and delivering a commencement speech at Liberty University in Virginia.

Smith says that the most effective campaign will go where the youth are, and will address their specific concerns. "You can't turn them out if you don't ask them," she says. Nor can you turn them out if they're not registered.

For Sanders, state director of The Texas League of Young Voters Education Fund, registration goes hand in hand with showing young voters, particularly those from low income backgrounds, how they can use electoral politics to defend their interests.

The Texas League of Young Voters, represented by the NAACP, was granted permission to state its views in the Justice Department's challenge of the new Texas voter ID law. A judge ascertained that the organization, though an outside party, had a useful perspective on the case.

The Justice Department is arguing that the new law hurts minorities, and Sanders said many of those affected are young voters.

"Many of our student members voted in previous elections in Texas using the only form of identification they had — a state-issued student ID — which would no longer be acceptable under Texas's proposed photo ID law," says Sanders in a press release.

The court is expected to hand down a decision this month in the Texas case. New voter ID laws that could be in place on Nov. 6 also are in court or under Justice Department review in several other states.