Accessibility links
Dressage Enthusiasts Find Romney-Driven Attention A Mixed Blessing : It's All Politics When a horse co-owned by the wife of Republican presidential candidate Mitt Romney was named to the U.S. Olympic team, the small American dressage community thought the publicity would help the little-known sport. But the increased interest has come with a sharp edge. 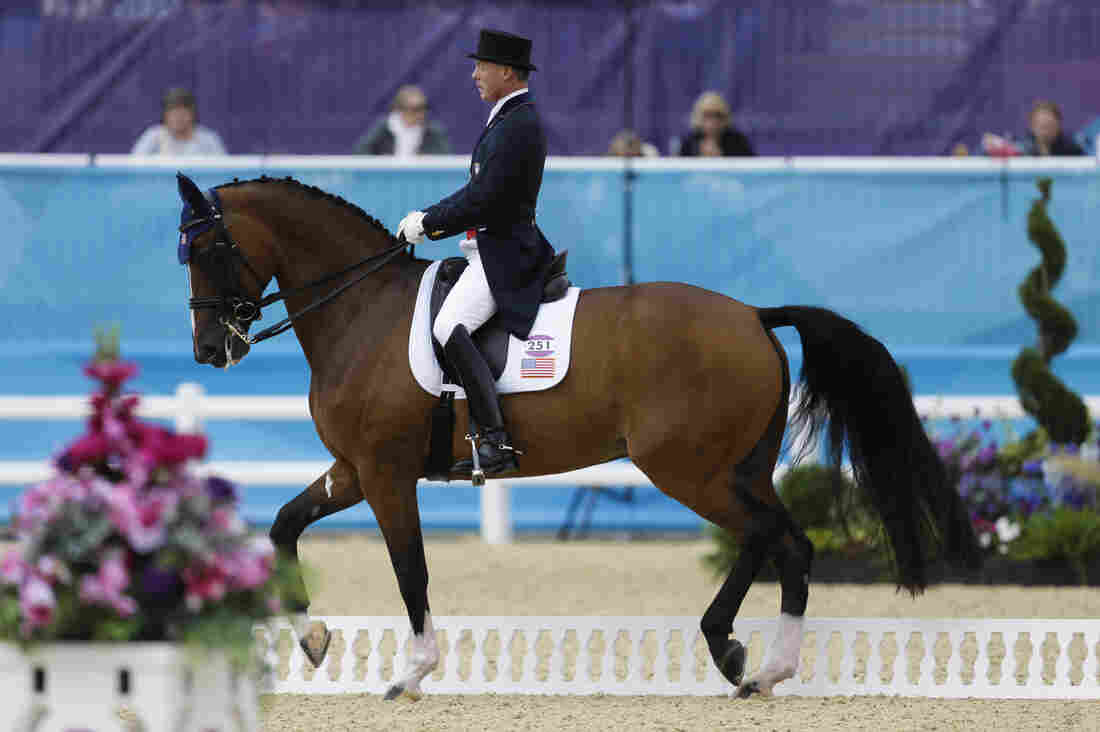 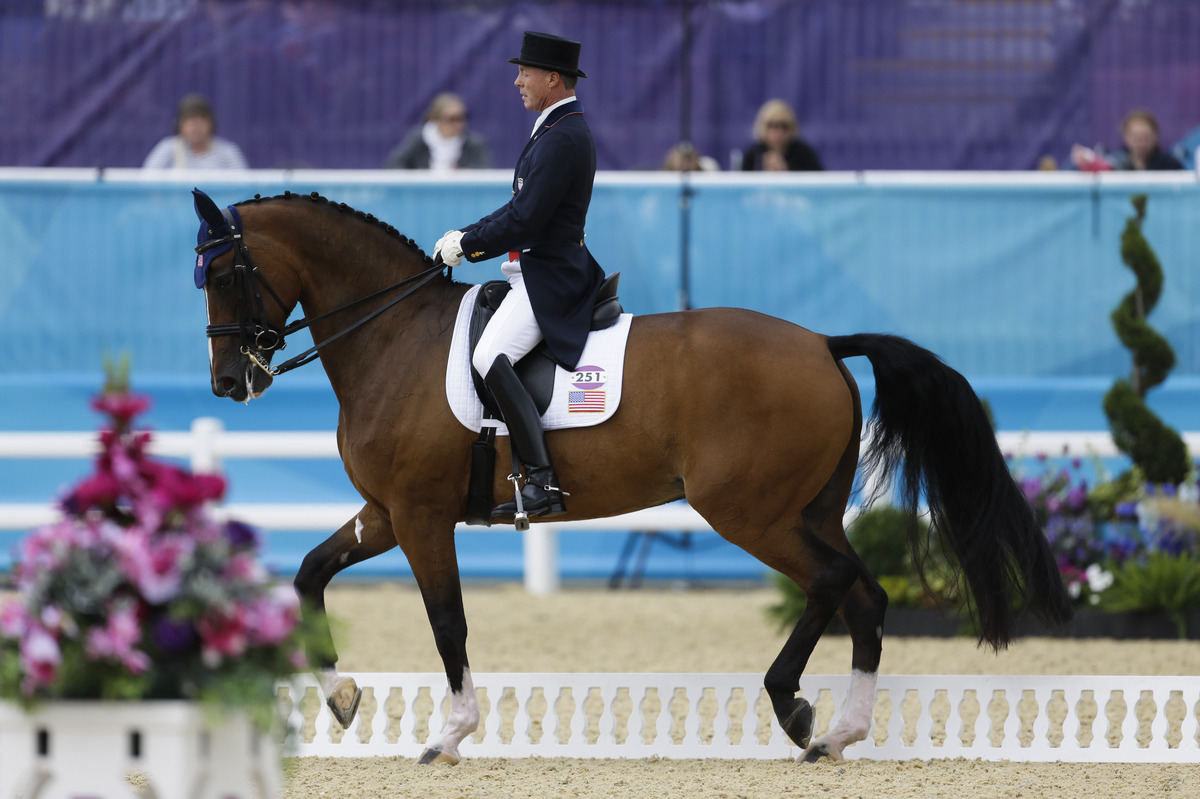 Jan Ebeling rides Rafalca in the equestrian dressage competition at the 2012 Summer Olympics on Aug. 2. Rafalca is co-owned by Ann Romney, the wife of Republican presidential candidate Mitt Romney.

When Rafalca, the horse co-owned by Ann Romney, was named to the U.S. Olympic team in June, the U.S. dressage community thought the publicity would help the little-known sport. But that's not quite how things turned out.

During the trials to select the Olympic team, comedian Stephen Colbert named dressage his "sport of the summer," clearly to poke fun at the involvement of Ann Romney's husband, Republican presidential candidate Mitt Romney.

"The image of Romney as a privileged princeling ends today," Colbert said in June. "Because now Mitt is just your average blue-collar fan of dressage. Of course, that word may sound highfalutin. But don't worry. It also goes by the street name 'horse ballet.' "

The dressage community decided to get in on the joke. For the final weekend of the selection trials, competition officials handed out beer and huge red foam fingers proclaiming dressage "#1." 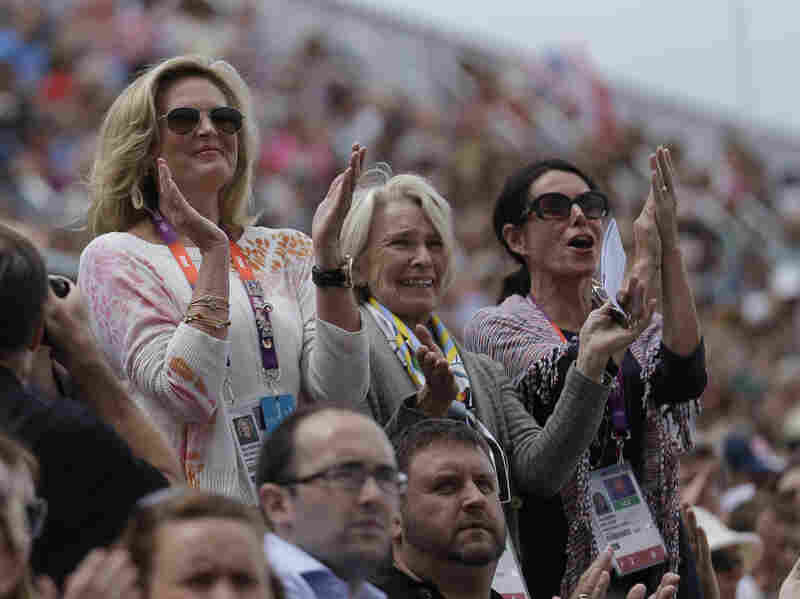 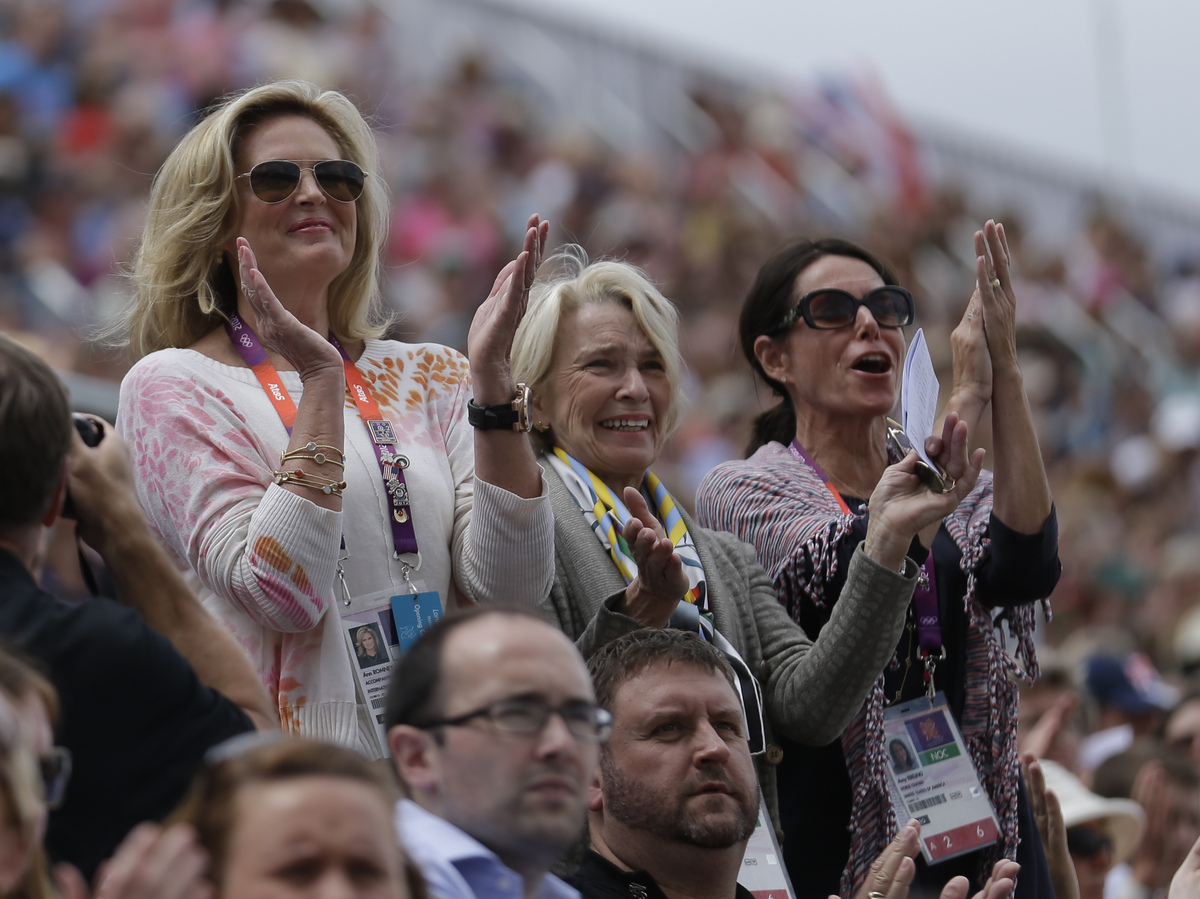 Rafalca's owners, Ann Romney (from left), Elisabeth Meyer and Amy Eberling, applaud after their horse's performance in the equestrian dressage competition at the Summer Olympics on Aug. 2.

Brian O'Connor, a longtime dressage announcer and the brother of equestrian Olympic gold medalist David O'Connor, said it was kind of a no-brainer.

Colbert's original spoof "actually really promoted the sport and what we were doing," said O'Connor, whose announcing resume includes the Olympics, the World Cup and the equestrian World Championships. "It just jumped the word 'dressage' all around the world instantly, and specifically here within the United States in a matter of seconds. ... I mean, he hit a home run for us; it was absolutely fantastic."

But while Colbert's ribbing was somewhat gentle, others have tried to use Romney's involvement in what is mostly viewed as an upper-crust sport as a bit more of a cudgel.

Among them is the liberal group MoveOn.org, which is running a 30-second ad featuring a talking horse pretending to be Rafalca.

"How do I pull off such grace and athleticism while looking so good?" asks the horse. "Maybe it's because the Romneys spent $77,000 a year on my upkeep. And after Mitt Romney repeals health care and ships your job overseas, I daresay your life will not be nearly as pampered as mine."

The $77,000 is a reference to a deduction on the Romneys' 2010 tax returns. It may help explain why candidate Romney has begun to back himself away from his wife's passion.

For example, when NBC's Brian Williams asked him to describe how the competition worked in an interview on the eve of the Olympics' opening ceremony, here's how he responded:

"I have to tell you, this is Ann's sport. I'm not even sure which day the sport goes on. She will get the chance to see it; I will not be watching the event. I hope her horse does well."

Indeed, even comedian Colbert's edge got a little sharper as the competition drew nearer. Last week he responded to claims by Rafalca's rider, trainer and co-owner Jan Ebeling that dressage is not solely a sport for the very wealthy.

"It's something you can do with a normal budget. Yeah, it's really all about budgeting," Colbert said. "You cut out a couple of lattes a week. By the end of the month, you got yourself a $3 million Dutch warmblood."

But comments like those have started to irritate the thousands of Americans — full disclosure, I am one — who actually do participate in the sport of dressage without being independently wealthy.

While every sport at the Olympic level is backed by wealthy people, "you can be pretty humble and ride dressage," said Betty Thorpe, a dressage judge and past president of the Potomac Valley Dressage Association.

Indeed, a stroll around the grounds of the PVDA's schooling show this past weekend at Morgan Run Stables in Westminster, Md., turned up mostly people who were not members of the 1 percent or the royal family. 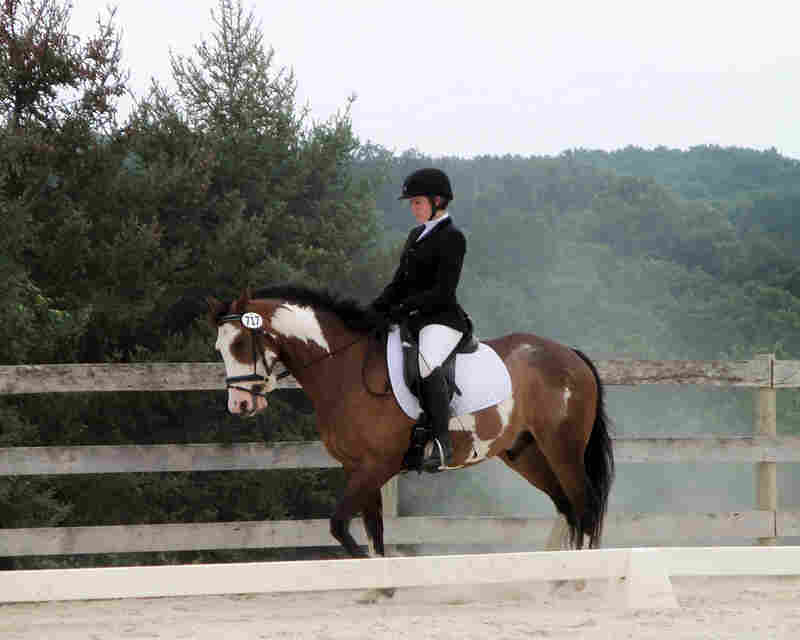 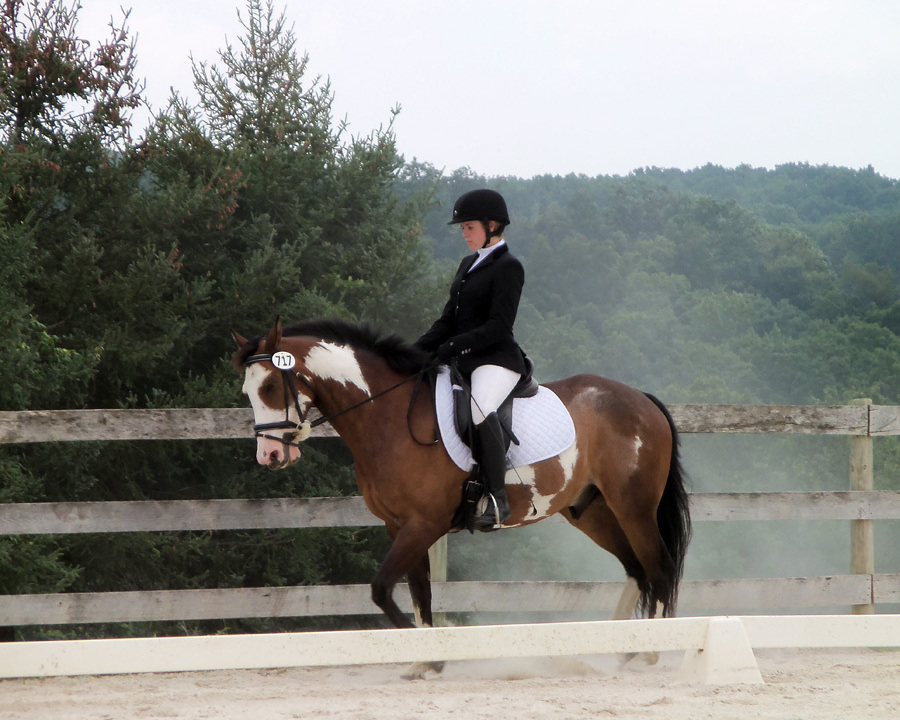 "Sadly no. I'm working on it," joked Celia Rozanski from astride Jasper, her Quarter Horse Paint gelding.

Rozanski, a college student studying neuroscience, said what's bothered her most about the publicity surrounding the Romneys and their Olympic horse is the idea that dressage is not all that difficult.

"It's a mistake to say that it's easy," she said. "It's not. It's really hard. It's one of the most challenging things I've ever done, I think, and I've done a couple different types of riding."

Jeanine Holtsburg was at the show with Miprieto, a retired racehorse. She said she wishes people could understand more of what the sport is really about.

"Dressage is not just for the rich, it should be for everyone," she said. "It is the basis for all of our riding disciplines, including barrel racing, stadium jumping, polo, and even racing. A lot of jockeys study dressage."

But what seems to have most disappointed dressage enthusiasts is Mitt Romney's sudden apparent lack of knowledge about the sport.

"I think he knows more than he says, and I wish he could be brave enough to own up to it," said PVDA judge Thorpe, who says she has seen both Romneys in person at major dressage competitions where Rafalca has competed. "Because there's plenty of people that enjoy it. It's not a huge sport, but we're very devoted."

Meanwhile, Rafalca actually did well in her Olympic debut last week. But this is an Olympics full of superstar dressage horses, and her chances for winning a medal are considered a long shot at best. Bad publicity or not, however, dressage fans in the U.S. will be cheering her on Tuesday.