Accessibility links
On The Trail, A Campaign's Style Can Reveal A Lot About Substance : It's All Politics While President Obama and Mitt Romney offer competing visions every day on the campaign trail, there's also a more superficial aspect to their campaigns. And from theme songs to crowd chants, the style of the presidential candidates' rallies couldn't be more different. 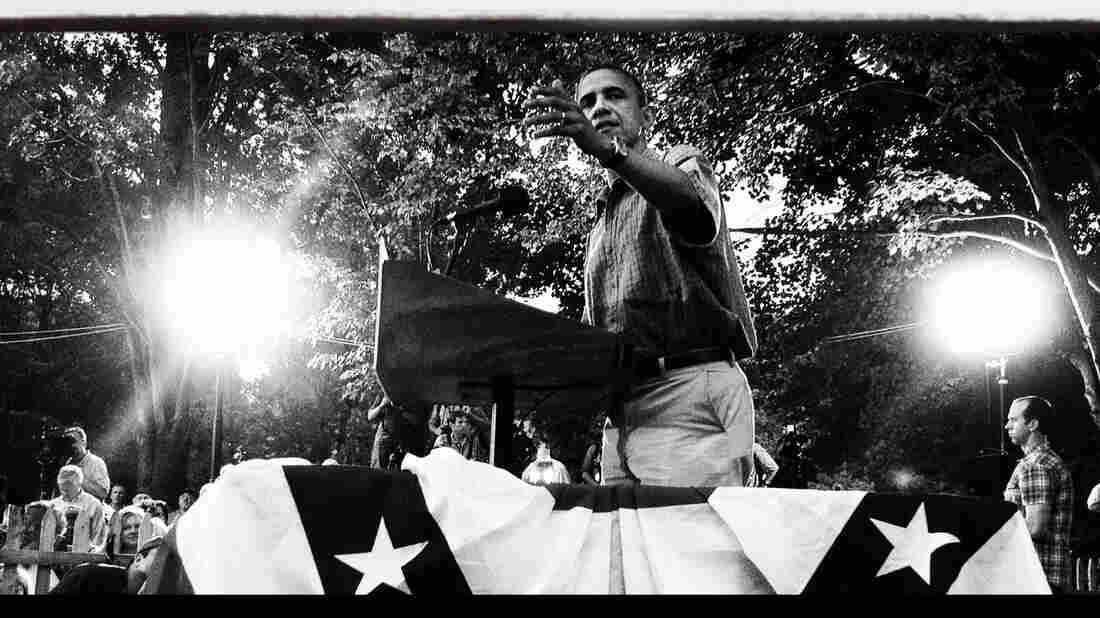 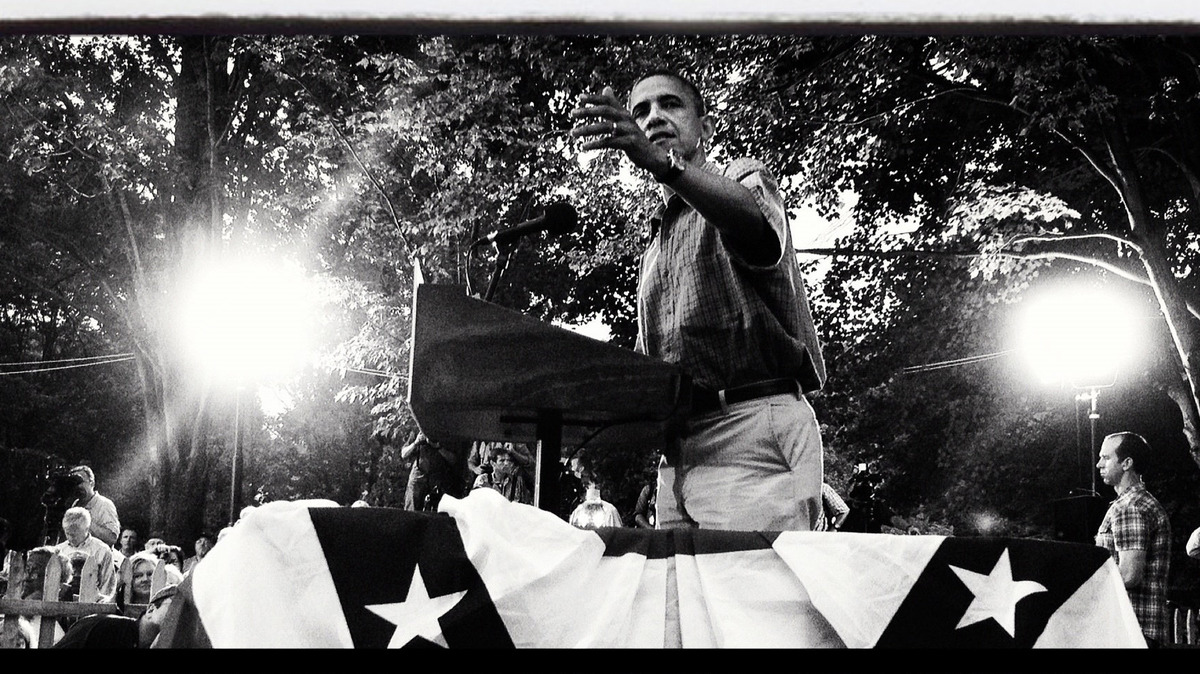 President Obama delivers remarks at a campaign event on July 5 in Parma, Ohio.

While President Obama and Mitt Romney offer competing visions every day on the campaign trail, there's also a more superficial aspect to their campaigns.

And on the surface, Obama and Romney events feel completely different.

Take a recent summer night in Leesburg, Va. Dorothy Fontaine had been standing outside of a local high school since the sun was high in the sky. 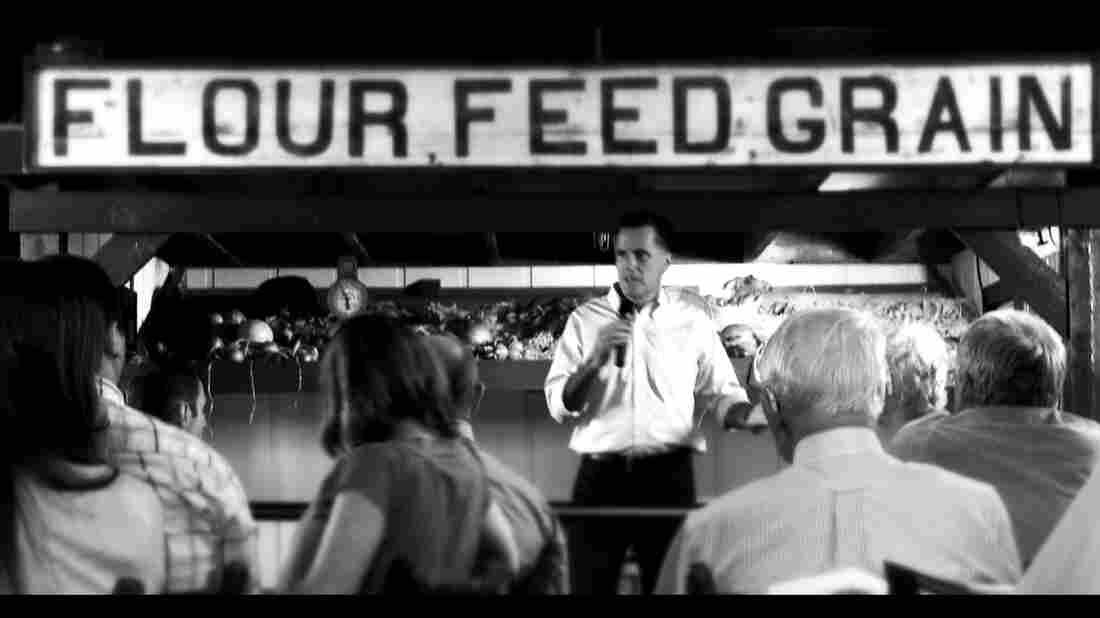 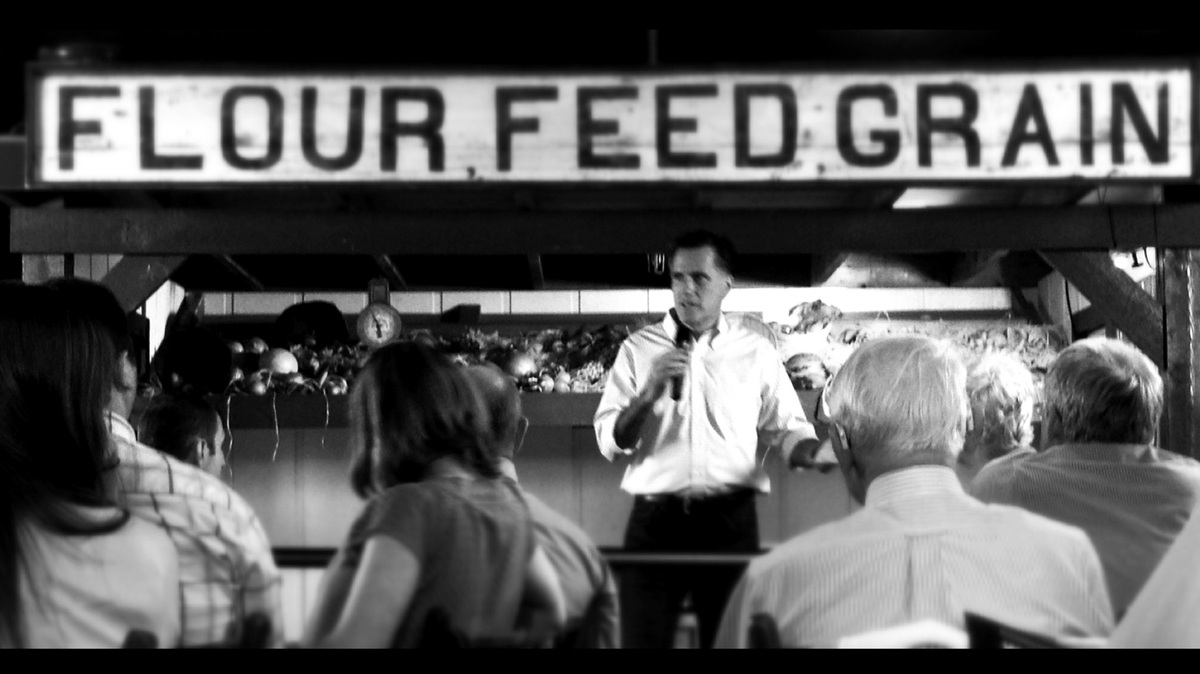 Compare that to Beatrice Sutton, who dropped by a Romney event outside Chicago on Tuesday morning. She showed up a little more than an hour before the candidate arrived.

"It was very simple, very simple. Walked right in, they wanded me or whatever you call it, and I walked right in and grabbed the last four seats in the place," she says.

In this race, there are lots of differences between the two candidates: One's a Democrat; the other's a Republican. One's black; the other's white. But the biggest difference may be that one is the leader of the free world.

"A lot of people just get excited when the president of the United States comes to their hometown," says Gordon Johndroe of the communications firm APCO Worldwide, who worked in the George W. Bush White House for eight years.

He remembers when President Bush attended the Daytona 500.

"The big old blue-and-white 747 that says 'United States of America' — Air Force One — comes buzzing over the field, lands and then the president and his motorcade drive the distance around the track for him to get to the grandstands as the red and blue lights are flashing, helicopters are overhead and the crowd just goes wild," recalls Johndroe.

That's something only an incumbent can do. 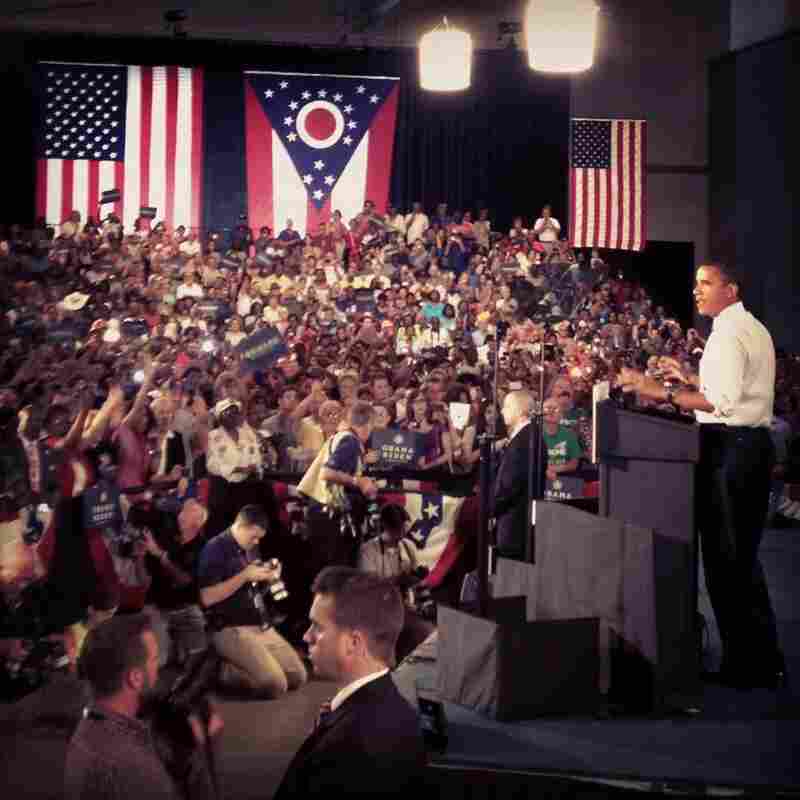 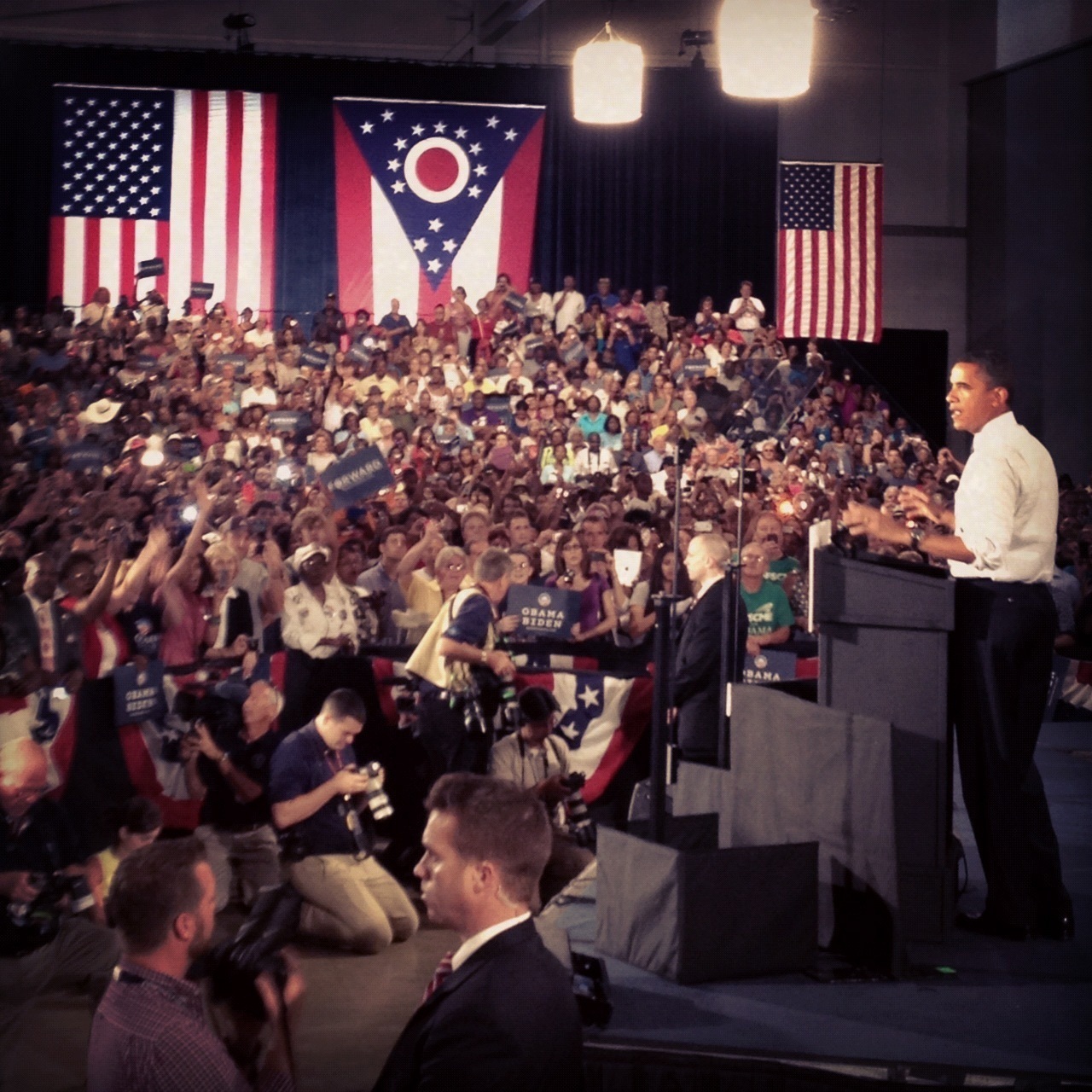 Obama speaks at a campaign rally in Akron, Ohio, on Wednesday.

Even before he was president, Obama was a rock-star candidate. By now it's practically a scripted part of his stump speech that someone in the audience shouts, "I love you!" and the president replies, "I love you back!"

There's a wound-up passion in the crowd that has become a signature part of the Obama brand. An event in Mansfield, Ohio, last week had about 2,000 people in the audience, smallish by Obama standards.

For Romney, crowds are more often in the hundreds. And he has tried to turn the president's glitz and glamour against the Obama campaign.

"I'm very concerned about how we can get Americans back in good-paying jobs with a bright and prosperous future. And let me tell you, I know how to do it," Romney said Saturday in Evansville, Ind., where his only public appearance was a low-key stop at a barbecue shack. 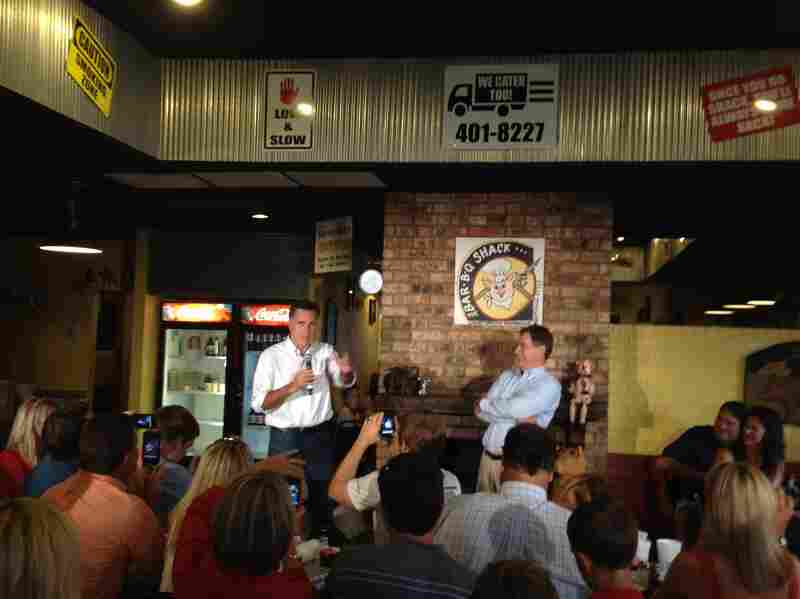 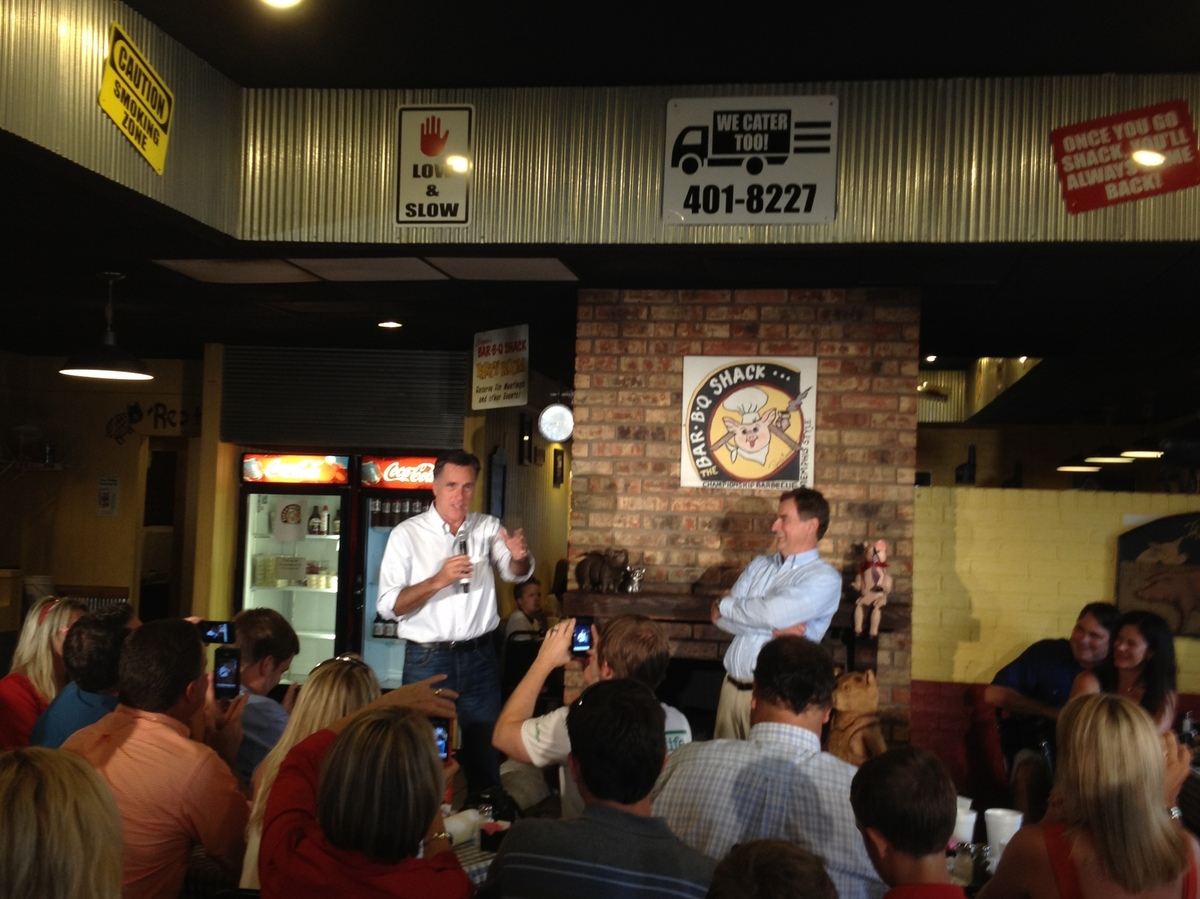 But Romney has his big, raucous rallies, too.

The crowds there chant his name — "Mitt! Mitt! Mitt" — while the crowds at Obama rallies chant the same rallying cry as every incumbent who has ever run for re-election: "Four more years! Four more years!"

The crowds don't just sound different. They look different. When I asked Tyree Gelzer, 8, about this at an Obama rally in Orlando, the look on his face said, "Duh." His answer to why he and his family came out to see Obama: "Well, he's the first black president."

At Romney rallies, it can be difficult to find any people of color in the crowd. The Republican Party acknowledges this challenge. That's one reason the list of Republican convention speakers out this week includes New Mexico Gov. Susana Martinez, South Carolina Gov. Nikki Haley, and former Secretary of State Condoleezza Rice. All three have broken racial and gender barriers.

Any and all campaign rallies end with a stirring burst of music that plays on repeat while the candidate shakes hands with supporters. The song choices here say more than almost anything else about the differences between the candidates. Romney exits the stage to "Born Free," Kid Rock's anthem to individualism. Obama goes with Bruce Springsteen's hymn to collective accomplishment, "We Take Care of Our Own."

In short, what's different between Obama and Romney campaign events? Everything but the flag.