Accessibility links
Obama Targets Romney On Tax Credit For Wind Energy Producers : It's All Politics The president supports extending the credit that's due to expire at the end of the year. His GOP rival does not. Their positions may have consequences in two battleground states: Iowa and Colorado. 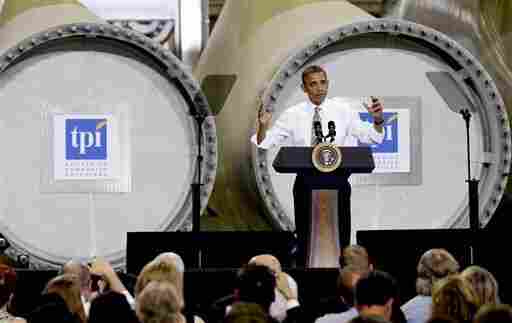 How many votes can President Obama gain or Mitt Romney lose because of the Republican's opposition to renewing federal tax credits to wind energy producers? The answer, with apologies to Bob Dylan, is blowin' in the wind.

Obama hopes to influence the answer by relentlessly pounding the all-but-official Republican presidential nominee's opposition to the renewal.

Meanwhile, Romney is aiming to strengthen his support from Republican and independent voters who dismiss the tax credits as another violation of free-market principles. But the position has created tensions within his GOP base because many Republicans support the credits.

As luck would have it, many of those Republicans happen to be in two presidential campaign battlegrounds: Iowa and Colorado.

Romney's opposition has given Obama an opening to try to exploit the rift as he underscores the priority he places on boosting renewable energy through public and private investments.

In a campaign rally in Pueblo, Colo., on Thursday, he criticized Romney for opposing the extension, driving home the point that new jobs were what was partly at stake:

OBAMA: "At a moment when homegrown energy, renewable energy is creating new jobs in states like Colorado and Iowa, my opponent wants to end tax credits for wind energy producers."

OBAMA: "Think about what that would mean for a community like Pueblo. The wind industry supports about 5,000 jobs across this state. Without those tax credits, 37,000 American jobs, including potentially hundreds of jobs right here, would be at risk. Colorado, it's time to stop spending billions in taxpayer subsidies on an oil industry that's already making a lot of profit — (applause) — and let's keep investing in new energy sources that have never been more promising. That's the choice in this election. That's why I'm running for president." (Audience applause.)

The president was singing the right tune for many in Colorado and Iowa, home to companies that manufacture components for wind turbines, their employees, and farmers and ranchers who get lease payments from turbine operators.

With job creation the paramount election issue, Obama's stance on the credit squares with the industry's itself. A study by Navigant Consulting on the American Wind Energy Association website found that a four-year extension of the credit would nearly double the number of industry jobs by 2016 to 95,000.

Despite this, Romney has opposed the credits. His opposition is of a piece with his allegations that Obama misspent taxpayer money and needlessly added to the federal deficit by giving tax dollars to renewable energy projects.

The most notorious of those, of course, was Solyndra, the bankrupt maker of solar panels and beneficiary of a $535 million federal loan guarantee.

Romney and other Republicans have charged that the loan guarantee was political payback for financial support to Obama from a Solyndra investor, an allegation the Obama administration denies.

A Romney spokesman explained the candidate's opposition to extending the tax credit, due to expire at the end of the year, to the Des Moines Register.

"Shawn McCoy, a spokesman for Romney's Iowa campaign, told The Des Moines Register, 'He will allow the wind credit to expire, end the stimulus boondoggles, and create a level playing field on which all sources of energy can compete on their merits.

" 'Wind energy will thrive wherever it is economically competitive, and wherever private sector competitors with far more experience than the president believe the investment will produce results.' "

For that position, Romney has drawn criticism from fellow Republicans, including Iowa's Gov. Terry Branstad, Sen. Chuck Grassley and others in the state's congressional delegation. The pressure on Romney has only increased since last week when the Senate Finance Committee passed a bill to extend the wind energy production credits in a bipartisan 19-5 vote.

A spokeswoman for Branstad said he wants to "further educate Gov. Romney and his team on the benefits of a short-term wind energy tax credit extension."

Campaigning in Iowa on Wednesday, Romney mentioned wind energy as one among many energy sources he'd like the nation to exploit more. But, noticeably, he didn't mention his opposition to extending the credits.

It's certain that Obama, who is scheduled to campaign in Iowa next week, will show no such reticence.