Accessibility links
Romney Picks Wisconsin's Ryan To Be His Running Mate On GOP Ticket : It's All Politics The chairman of the House Budget Committee has been tapped to be the vice presidential nominee on the 2012 Republican ticket. 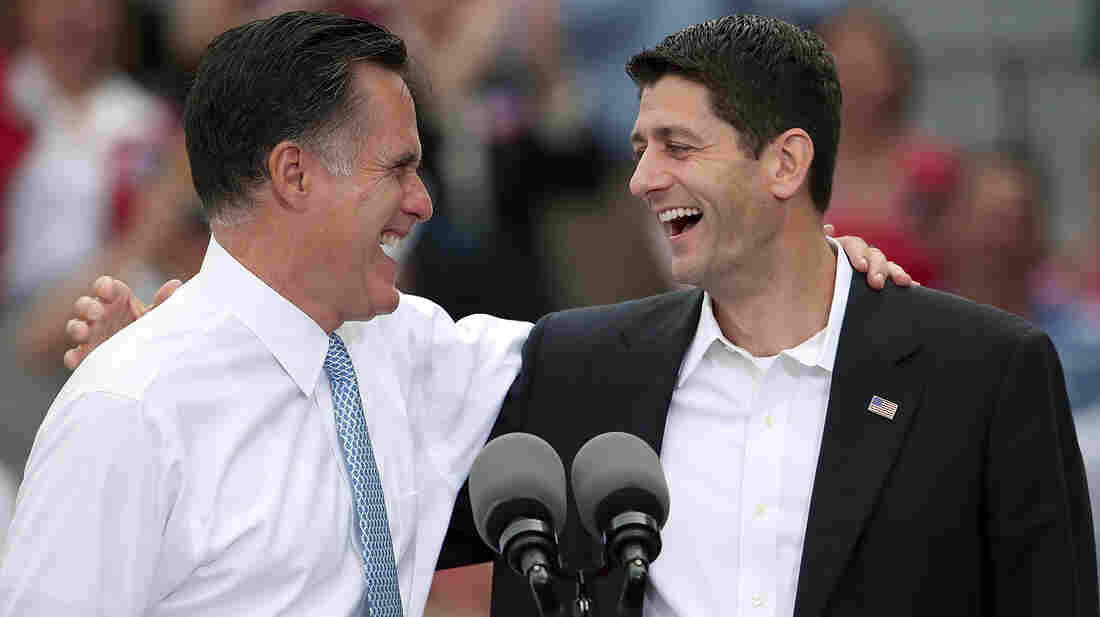 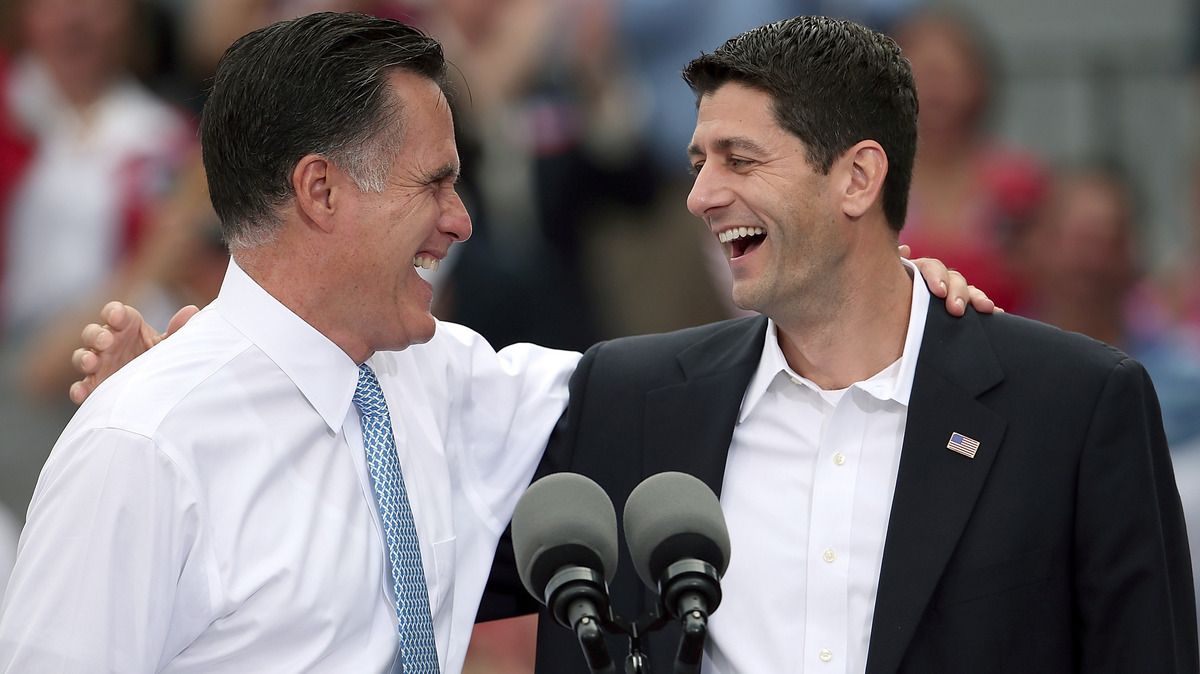 The official word, which began leaking overnight, came early this morning from the Romney campaign via a smartphone app and a news release.

More On The VP Pick

It's something of a surprise. While Ryan was on all the lists when it came time to speculate about Romney's likely choice, the conventional wisdom had been that it was more likely to be someone such as Ohio Sen. Rob Portman or Florida Sen. Marco Rubio.

Ryan comes from a competitive state with just 10 Electoral College votes. Ohio's 18 and Florida's 29 are much more valuable prizes.

But Ryan is a favorite of conservatives across the nation for his tough talk about tax cuts, spending cuts and fiscal discipline. The two are set to formally accept their party's nominations at the Republican National Convention later this month in Tampa.

We've been following the news about the choice of Ryan, the 42-year-old chairman of the House Budget Committee who is nationally known for his championing of tax and spending cuts. Be sure to hit your "refresh" button to get our latest updates.

With the choice of Ryan, NPR's Don Gonyea says, the Republican ticket can now "start a different conversation and a conversation about what they plan on doing."

As he wrapped up his remarks, Ryan said he is thrilled to be part of the ticket and promised that a Romney/Ryan administration would "unite America and get this done!"

Ryan gets more strong approval when he says: "We won't duck the tough issues, we will lead. ... We won't blame others, we will take responsibility. ... And we won't replace our founding principles, we will reapply them."

Some of the biggest cheers so far for Ryan come when he says "our rights come from nature and God, not from government."

Ryan says that under President Obama, the "new normal" for many Americans has become "diminished dreams, lowered expectations, uncertain futures." That shouldn't be, he says.

The Obama administration, Ryan says, has compiled a "record of failure."

"We find ourselves in a nation facing debt, doubt and despair," he tells the crowd.

"It is our duty to save the American dream for our children and their's," says Romney.

"I am committed in heart and mind" to putting his experience to work in a Romney administration, Ryan says.

Saying that every once in a while he makes a mistake (as in, referring to Ryan as "the next president of the United States"), Romney just came back to the microphone to say he didn't make a mistake in choosing Ryan.

Update at 9:28 a.m. ET. Romney Calls Ryan "The Next President Of The United States":

In the excitement of introducing his running mate, Romney just said "join me, in welcoming the next president of the United States, Paul Ryan."

As Romney continues his remarks, Obama campaign manager Jim Messina has sent reporters a statement that says, in part, that Romney has chosen "a leader of the House Republicans who shares his commitment to the flawed theory that new budget-busting tax cuts for the wealthy, while placing greater burdens on the middle class and seniors, will somehow deliver a stronger economy."

He and Ryan, Romney says, will offer a "positive governing agenda."

Update at 9:23 a.m. ET. Ryan Is In Politics For Right Reasons, Romney Says:

Ryan isn't in politicos "to advance his personal ambition," Romney says, "but to advance the ideals of freedom and justice."

"It's an honor to announce my running mate and the next vice president of the United States, Paul Ryan!" Romney just announced.

Romney just popped out of a door aboard the USS Wisconsin, jogged down to the dock, and is at the microphone. He's getting a loud welcome.

Both of the candidates' spouses are now on stage in Norfolk and Virginia Gov. Bob McDonnell is at the microphone. So it looks like Romney and Ryan will be appearing shortly.

On NPR's broadcast, correspondent Don Gonyea just said that the first rule when selecting a running mate is "do no harm." It remains to be seen, of course, whether Romney has succeeded with his choice of Ryan.

We'll be updating with highlights from the candidates' first joint appearance. Of course, it's also going to be broadcast on the cable news networks and will be streamed online by various outlets, including C-SPAN.

You can listen live on many NPR stations, and on NPR.org.

Update at 8:52 a.m. ET. From The Right Side Of The Blogosphere, Talk Of Credentials And Charm; Sighs Of Relief:

Ed Morrissey, prominent conservative blogger at HotAir.com, writes that "Ryan has solid policy credentials, but also has enough media presence and charm to make people listen. Team Obama will hang Ryan's budget on Romney, but they were going to do that anyway. Why not have the man himself as the VP to explain it?"

Another leading conservative blogger, Erick Erickson of RedState.com, says "the sighs you hear are Republicans sighing some relief. Finally, the Romney campaign has a spokesman who can do what Mitt Romney has never been capable of doing — defend success and articulate a message of why we must reform our nation's budget and support free markets."

A "senior Romney adviser" has told CNN that Romney decided Ryan would be his running mate on Aug. 1.

The Associated Press calls Ryan "the architect of a conservative and intensely controversial long-term budget plan to remake Medicare and cut trillions in federal spending."

Update at 8:35 a.m. ET. Ryan To Say The GOP Team "Will Restore The Dreams And Greatness Of This Country":

The Romney/Ryan campaign just released some excerpts of the remarks Ryan is set to make in Norfolk. Among them:

"Mitt Romney is a leader with the skills, the background and the character that our country needs at a crucial time in its history. Following four years of failed leadership, the hopes of our country, which have inspired the world, are growing dim; and they need someone to revive them. Governor Romney is the man for this moment; and he and I share one commitment: we will restore the dreams and greatness of this country."

-- The New York Times says the choice of Ryan "shakes up" the campaign.

-- To The Wall Street Journal, Romney's decision "puts spending" at the center of the campaign.

-- According to Politico, "Romney now has a chance to make the race about something big, rather than the petty squabbles that have dominated the general election so far."

Milwaukee's Journal Sentinel has substantial coverage of Ryan and background on him. It includes a timeline of the congressman's life, from his Jan. 29, 1970, birth in Janesville, Wis.

The New Yorker's Ryan Lizza, who this month wrote a long profile of Ryan for the magazine, calls Romney's choice of the young congressman "the most daring decision of [Romney's] political career."

And, Lizza writes, "the good thing about the Ryan pick is that the presidential campaign will instantly turn into a very clear choice between two distinct ideologies that genuinely reflect the core beliefs of the two parties."

The Romney campaign is touting the ticket as "America's comeback team." It says the seven-term congressman has "worked tirelessly ... to reign in federal spending and increase accountability to taxpayers."

On the Romney campaign's Twitter page, the presidential contender now says "I am proud to announce @PaulRyanVP as my VP. Stand with us today."

-- "[It] lowers tax rates and cuts tax breaks. But ... doesn't say which tax breaks would be targeted for new limits or elimination."

"I'm excited, I'm encouraged, I'm enthused, because in this man we have a person of conviction, we have a man with the right kind of experience, we have the right kind of leader we're going to need to get this country right and to get this country back on track, and I want to ask you fellow Wisconsinites to join me in welcoming who I hope becomes the next president of the United States, Governor Mitt Romney."

In May 2011, Ryan sat down with NPR editors and correspondents. On The Two-Way, we led our live-blogging of that conversation with this:

One day after assailing Democrats for what he says are their "Medi-scare" political tactics, the author of the Republican plan to remake Medicare and Medicaid and cut the federal deficits and debts made the case that so far Republicans are "negotiating with ourselves" on those key issues because Democrats are the ones that won't enter the debate.

"Ryan has youth and experience, he's a conservative from a swing state, and he has big ideas and the policy chops to back them up. But the chairman of the House Budget Committee would not be the safest of choices. ...

"Ryan's pedigree is strong. He worked on the staffs of Kansas Sen. Sam Brownback and the late Republican luminary Jack Kemp. He won his own seat at 28, which means that now, at 42, he's a seasoned legislator.

"But it's Ryan's ideas that first catapulted him into political stardom. The budget plan he introduced in 2010, or the 'road map,' as he called it, ignited a major debate within Congress. ...

"Ryan's budget was instantly controversial. It called for sweeping cuts to social programs, and, most troubling for seniors, would have changed Medicare from a guaranteed benefit to a voucher program.

"Still, Republicans lined up behind it and rode the plan to a sweep of the House, giving Ryan the chairmanship of the Budget Committee. Within a few months, the House passed the Ryan budget (although the Senate did not).

"That's the kind of energy a Romney candidacy could use."