Accessibility links
Historically Cautious Romney Takes 'Shot Down The Field' In Ryan : It's All Politics Even during his time in the high-risk, high-reward field of venture capital, Mitt Romney had a reputation as being exceedingly cautious. But his choice of House Budget Committee Chairman Paul Ryan as a running mate shows another side of the Republican who would be president.

Historically Cautious Romney Takes 'Shot Down The Field' In Ryan

Historically Cautious Romney Takes 'Shot Down The Field' In Ryan 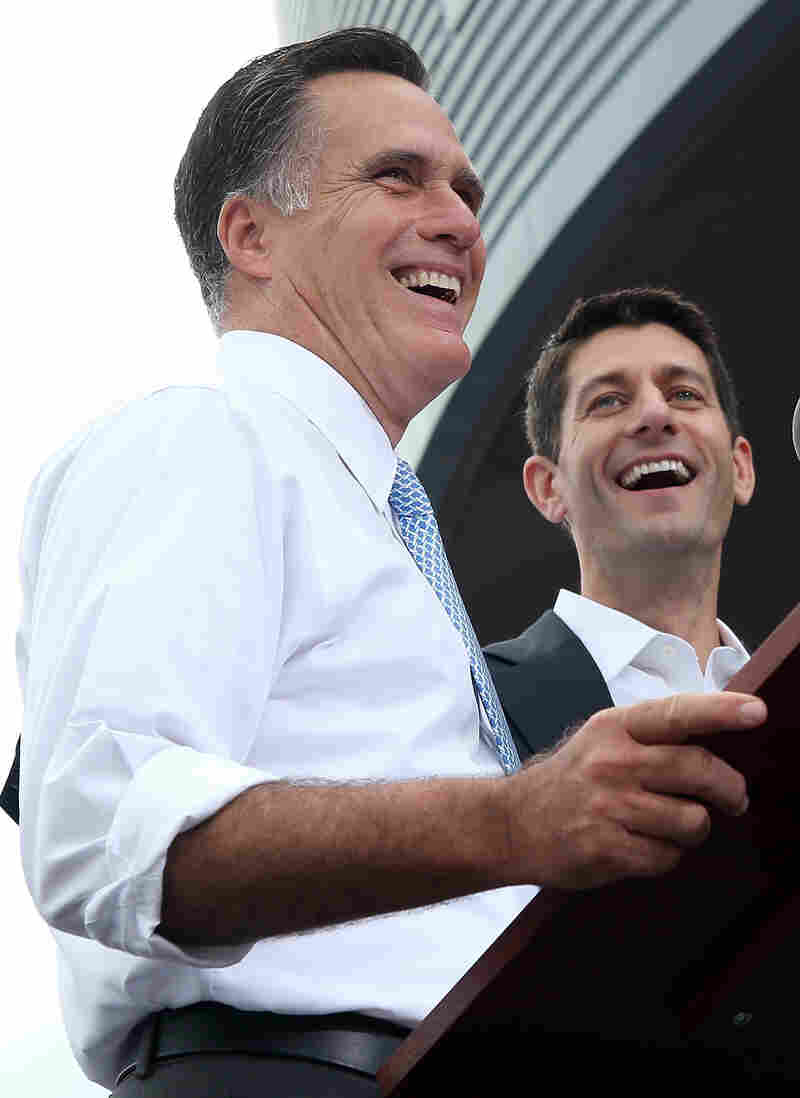 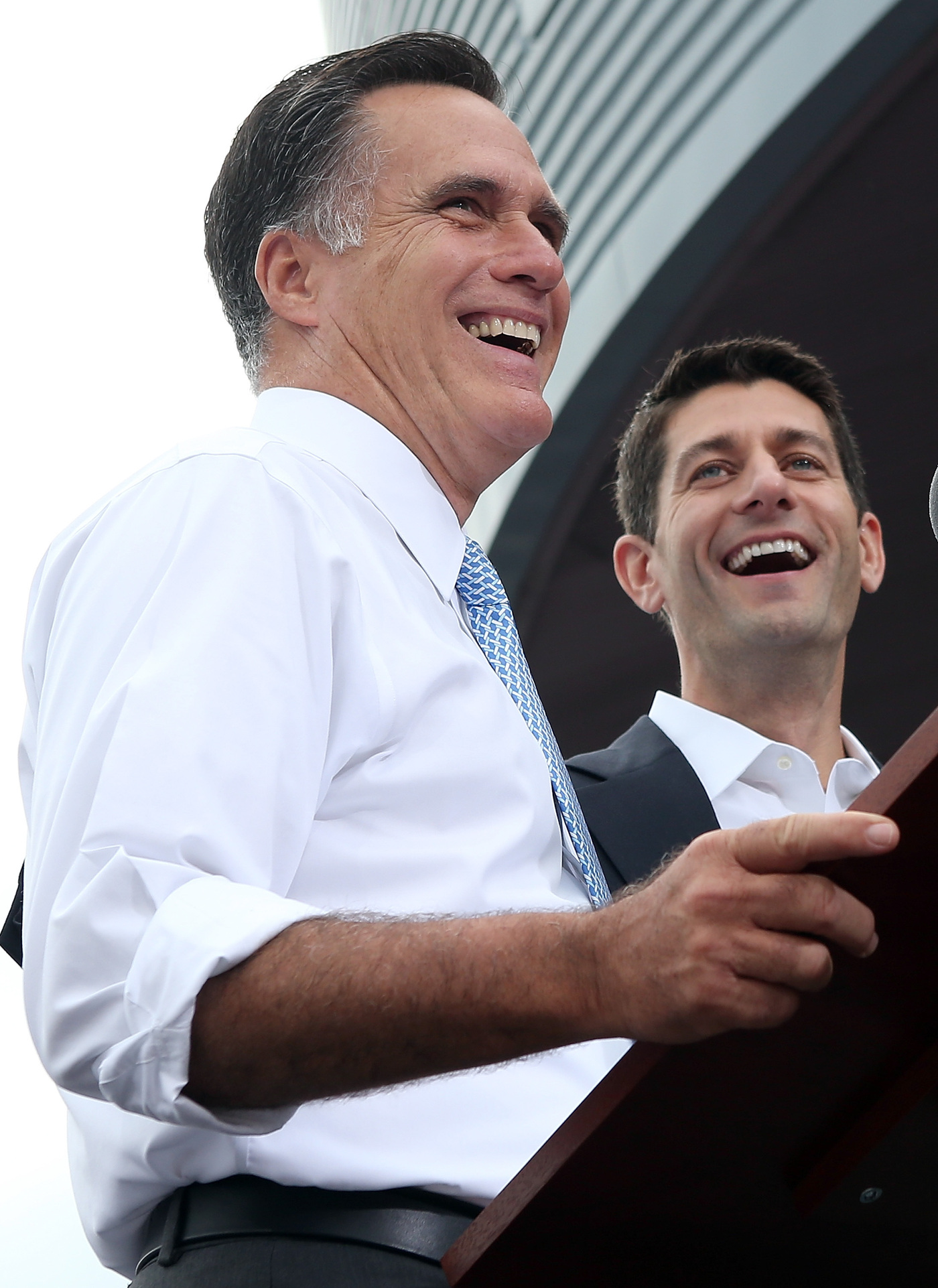 Some of those who know Mitt Romney best or have studied his political and business careers say the Republican presidential candidate tends toward caution and deep analysis in making decisions.

That helps explain why his choice of Rep. Paul Ryan surprised more than a few: Among the candidates reportedly on Romney's short list, Ryan was widely perceived as one of the less-safe choices.

Ryan, the congressman from Wisconsin who chairs the House Budget Committee, has been a lightning rod for Democrats because of his proposed budgets, which would transform Medicare into a voucher program.

Other names, like those of Sen. Rob Portman of Ohio or former Minnesota Gov. Tim Pawlenty, were seen as much safer.

But Romney decided to take what at first blush appeared the riskier path, making it seem that he was playing against type.

Allan Lichtman, an American University history professor and expert on the presidency, told It's All Politics in an interview:

"Instead he goes for a much more risky, controversial pick, one that will obviously shore up his conservative base but greatly sharpen the debate over taxes and budgets. I think it shows [Romney] may be a bit more of a risk-taker than people imagined."

Or not. It could be that Romney is actually making a very analytical pick after all. More Lichtman:

"It also may show, I don't know this, it's speculation, that maybe his internal polls were showing him that this race was looking pretty grim at this point and that he needed a shake-up kind of pick. It's not a Hail Mary pass like Sarah Palin was four years ago, but it is a shot down the field, not a safe route down the middle. So it has a chance to connect for a touchdown, or it could be intercepted with the ball going the other way."

James Thurber, director of the Center for Congressional and Presidential Studies at American University, told It's All Politics:

"It's bold in the sense that he's selecting somebody who's really on the right who can solidify the right for him and make sure that they turn out and vote. I think he was careful about his selection. It certainly wasn't a Sarah Palin thing at the last minute. And he vetted all the candidates very carefully."

"Vice presidents rarely help in the Electoral College, so he didn't go for [Fla. Sen. Marco] Rubio or Portman or somebody like that. I think he was analytic about this. And yet the positions of Ryan are certainly going to be headlines for a while because the're so controversial."

For instance, before Romney accepted the opportunity to leave the Bain & Co. consulting firm to start Bain Capital, a venture capital and private equity firm, Romney held out until his boss agreed that if the new company failed:

"Romney would get his old job and salary back plus any raises he would have earned during his absence. Still, Romney worried about the impact on his reputation if he proved unable to do the job. Again, the pot was sweetened. [Bill] Bain promised that, if necessary, he would craft a cover story saying that Romney's return to Bain & Co. was needed because of his value as a consultant. 'So' Bain explained, 'there was no financial or professional risk.' This time Romney said yes."

Kranish and Helman also report that at Bain Capital, Romney's caution when it came to investing in deals could at times frustrate his partners, who were more forward-leaning on deals. Kranish and Helman report on a Bain partner's observation of Romney:

"Whereas most entrepreneurs accepted failure as an inherent part of the game, the partner said, Romney worried that a single flop would bring disgrace. Every calculation had to be made with care."

Kranish and Helman report that Romney apparently got somewhat more aggressive over the course of his business career.

Certainly, anyone who gets as far as Romney has in national politics — a few weeks from becoming his party's official nominee — by definition is a risk taker.

Now, we get to see if Romney's risky choice of Ryan helps more than hurts the man who would be president.