Accessibility links
Five Takeaways From Tuesday At The Republican Convention : It's All Politics Republicans set the tone for their convention with lots of talk about why their ideas are better for the nation than those of President Obama and the Democrats. But they also showed a lot of love for some stars, including Ann Romney and several governors.

Five Takeaways From Tuesday At The Republican Convention

Five Takeaways From Tuesday At The Republican Convention 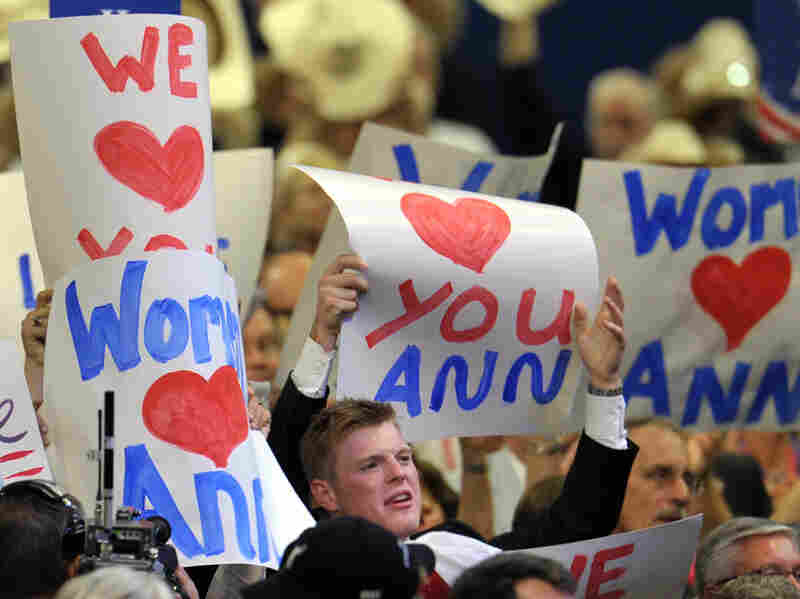 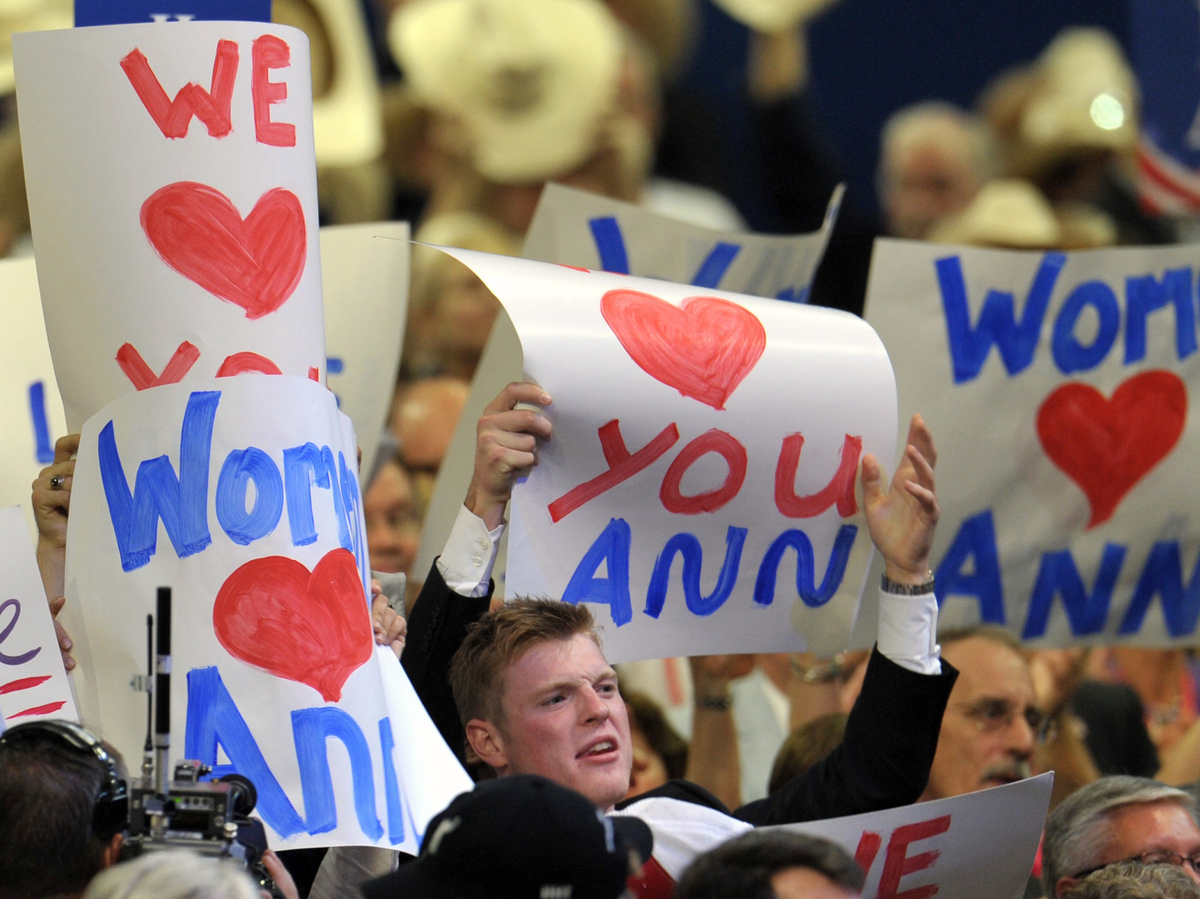 Delegates showed their love for Ann Romney at the Republican National Convention on Tuesday.

If you missed some of Tuesday's action at the Republican National Convention, we were live blogging here and you can always read through it to see how the day and evening went.

But if you'd like to save some time, here are five things that struck us:

-- The Delegates Really, Really Love Ann Romney: Presidential nominee Mitt Romney's wife, Ann, used her address to talk about love — love for her husband, love for others who need help and love for America.

It was clear from delegates' reactions that there was lots of love for her in the crowd. From the occasional shouts of "We love you, Ann!" to the huge cheers for her applause lines, it was obvious the crowd was with her. And when she ended by saying "you can trust Mitt," she might have delivered one of the most helpful lines her husband's campaign could ever have crafted.

-- 'We Did It' And 'Their Ideas Failed': Sure, "we did build that" or "we built it" were said a lot. But New Jersey Gov. Chris Christie summed up one of the night's most pointed messages when he quickly went from saying "we did it" — to punctuate the accomplishments he's touting from his time in office — to then say, "I know this simple truth, and I'm not afraid to say it: Our ideas are right for America, and their ideas have failed America." Those folks with the other ideas, of course, are President Obama and his fellow Democrats.

-- Stand Up To Unions And You're A Star: As much as the delegates loved Ann Romney and Gov. Christie, their enthusiasm was just about as high for Govs. Scott Walker (Wisconsin) and John Kasich (Ohio). Walker, of course, is famous for delivering on his promise to curtail public unions' collective bargaining rights. And Kasich is loved by Republicans for turning around Ohio's budget woes.

-- Republican Party Leaders Do Not Put Up With Floor Fights: Ron Paul's supporters were loud and angry in the first few hours of the convention as party leaders pushed through some changes to the rules and left some of the Texas congressman's delegates from Maine out in the cold. But even though their "NO!" votes seemed louder than the "YAYs," the objections were overruled. Sure, officials knew that Romney delegates far outnumbered Paul delegates and that if roll calls were taken the Paul supporters would come up short. But the image of folks being steamrolled will linger with many. "This is going to turn some people off," said Maine Republican National Committee member and delegate Rick Bennett.

-- The Night Was And Wasn't About Mitt Romney: The former Massachusetts governor has been trying to become his party's presidential nominee for more than six years, and officially getting the nomination was certainly a big moment for him. But many of the prime-time speakers spent more time talking about their own accomplishments and lives (see: Christie, governor of New Jersey) than they did about the presidential nominee. Since the Romney campaign was involved in all the planning and certainly saw all the speeches, it was part of a strategy. Tonight was about telling the nation who Romney is, but it was also about telling the nation why Republicans are better than Democrats — and especially why their ideas are better than President Obama's.