Accessibility links
Ann Romney Delivers: 'She May Have Privilege, But She Understands' : It's All Politics The speech, the experts and pundits proclaimed, needed to humanize Mitt Romney. But it also served as a vehicle to humanize her, a woman of great attractiveness and expensive polish touched by cancer, multiple sclerosis and the trials of raising five sometimes screaming children.

Ann Romney Delivers: 'She May Have Privilege, But She Understands'

Ann Romney Delivers: 'She May Have Privilege, But She Understands' 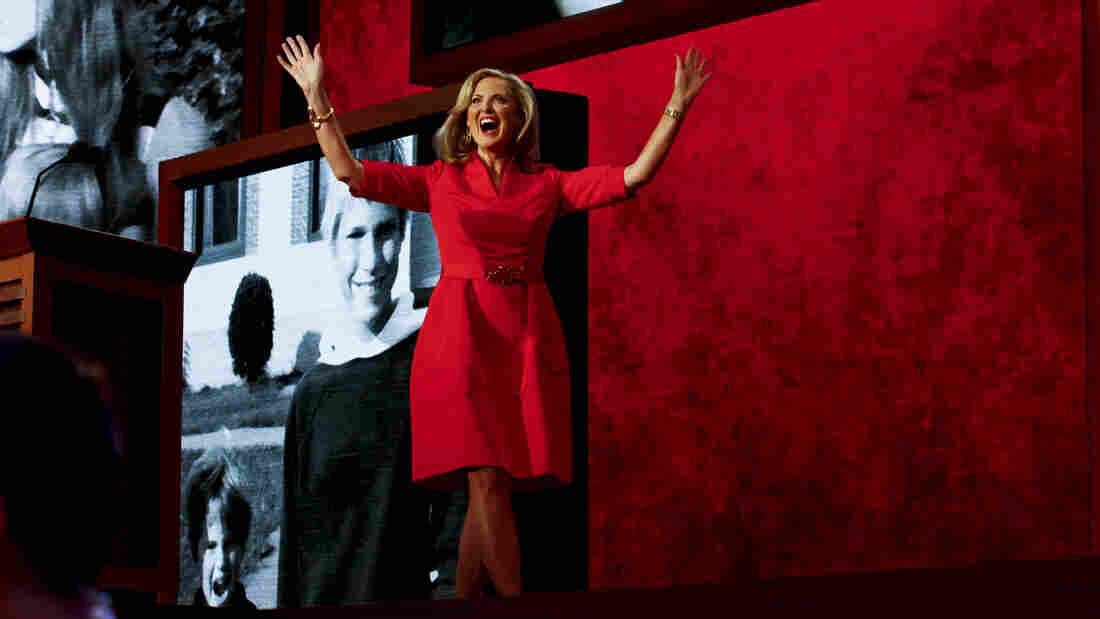 Ann Romney spoke to a cheering crowd at the first night of the Republican National Convention. Becky Lettenberger/NPR hide caption 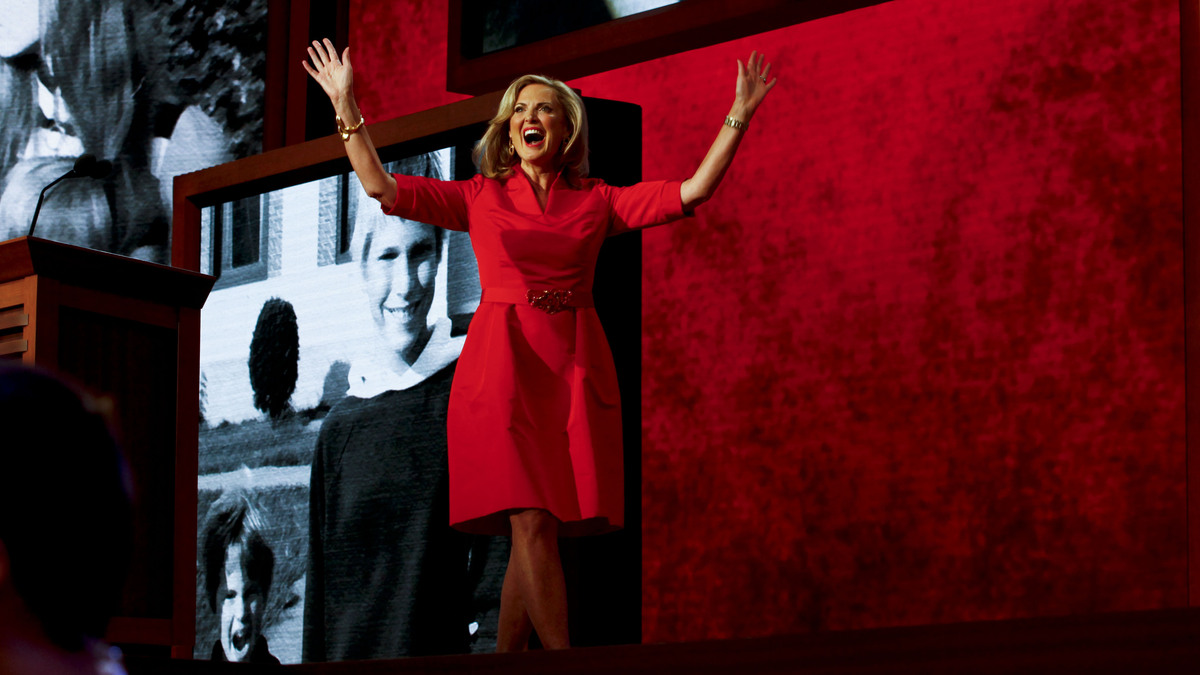 Ann Romney spoke to a cheering crowd at the first night of the Republican National Convention.

A soft murmur of familiarity rippled through the packed GOP convention hall Tuesday night when Mitt Romney's wife, Ann, spoke not of their "storybook marriage" but of one touched by cancer, multiple sclerosis and the trials of raising five sometimes screaming children.

"A storybook marriage? Not at all," she said, during her much anticipated prime-time speech. "What Mitt Romney and I have is a real marriage."

It was that moment that encapsulated the job that Ann Romney had to do, and how well she managed it.

From her perch of privilege and prerogative, she managed to convey not ordinariness, but at least a familiarity with struggle and a connection with women — actually, mothers were her exclusive focus — who have gone to bed exhausted; who have struggled with health issues as she has with breast cancer and multiple sclerosis; and who, when juggling the demands of raising children and running a home while her husband pursued his education and fortune, has wondered what she'd gotten herself into.

"I was so glad she had this opportunity to talk to the women of America, to have them hear about the trials they went through," said Barbara Bair, 47, a convention delegate from York, Pa. "And to hear that her husband is a man that stands behind her, supporting her through breast cancer. There is nothing scarier for families than cancer." 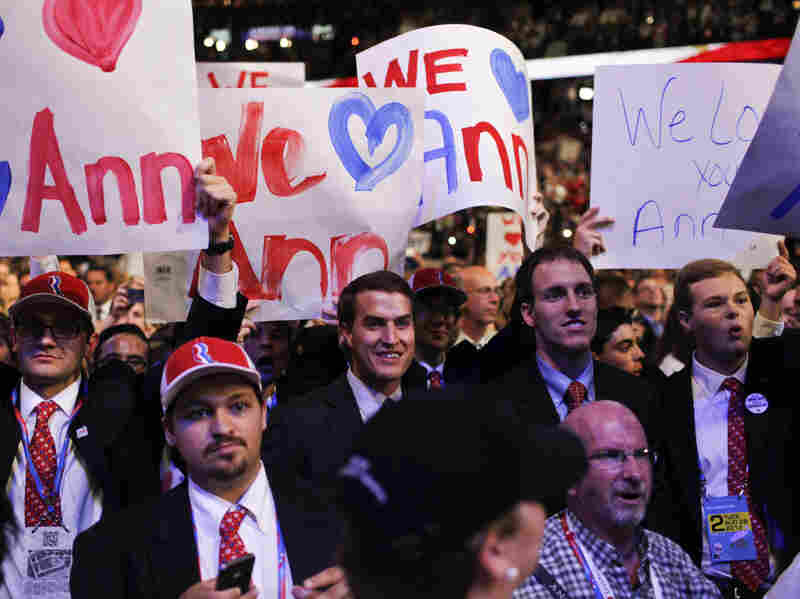 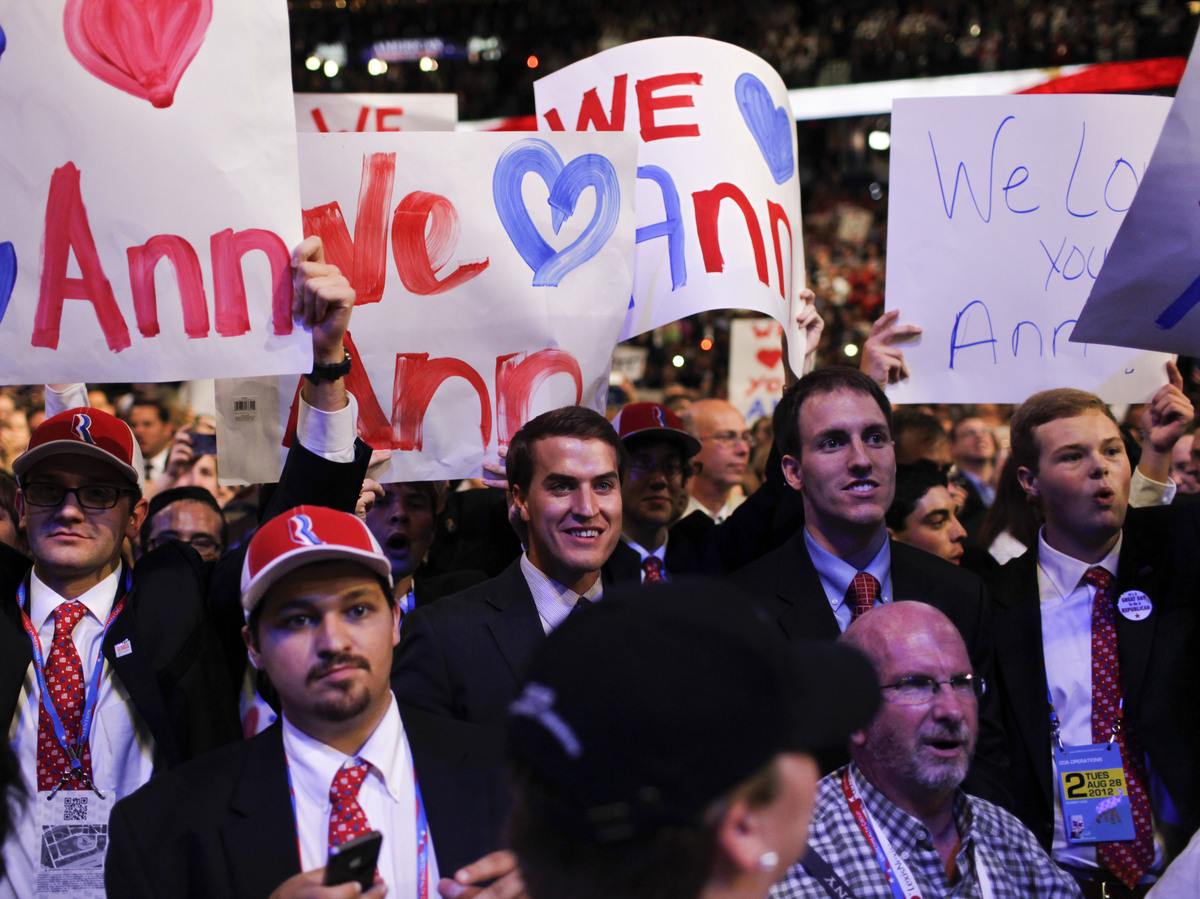 Supporters react during Ann Romney's speech on Tuesday at the Republican National Convention.

The speech, the experts and pundits proclaimed, needed to humanize Mitt Romney. But it really served as a vehicle to humanize her — a woman of great attractiveness and expensive polish — and, by extension, him. And that's all intended, of course, to help him appeal more to women who have been spooked by the Republican Party's positions on reproductive and workplace rights.

"She may have privilege, but she understands," said Kitty Dunn, 65, a Utah delegate who has met the Romneys.

That's not to say that Ann Romney stuck with her speech's opening line, "I want to talk to you about love."

About halfway through her speech, the soft tones of reminiscence of family and young love gave way to a tougher, more strident defense of her husband, his unheralded good works, his business success.

"Do we want to raise our children to be afraid of success?" she asked with a tough edge. And she defended Bain as a dream launcher, a company that "has helped so many others lead better lives."

That part was clearly a tougher sell.

But her soft sell, from her "I love you women!" exclamation — it wasn't on the teleprompter — and the connection she made talking about her own struggles, was effective.

"She gave an energetic explanation of marriage — and I know, because I have three children at home," said Greg Treat, 34, a delegate and state senator from Oklahoma. "I think Ann Romney will make a difference. Michelle Obama is a huge positive for the president, and Mrs. Romney will be for her husband as well."