Accessibility links
Ryan's Speech Revives The Spirit Of Jack Kemp, War Over Reaganomics : It's All Politics Rep. Paul Ryan demonstrated in his convention speech that he's a true believer, much like two previous politicians he has sought to emulate: Ronald Reagan and Jack Kemp. Kemp's economic ideas were controversial decades ago, but they've gained new life in the vice presidential nominee's budget plan. 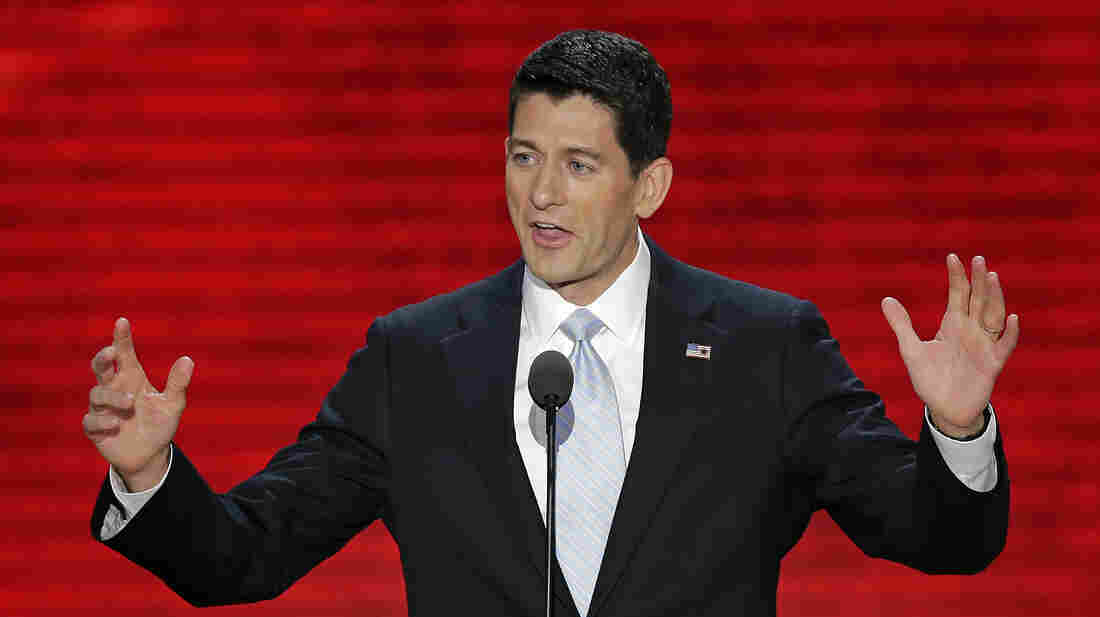 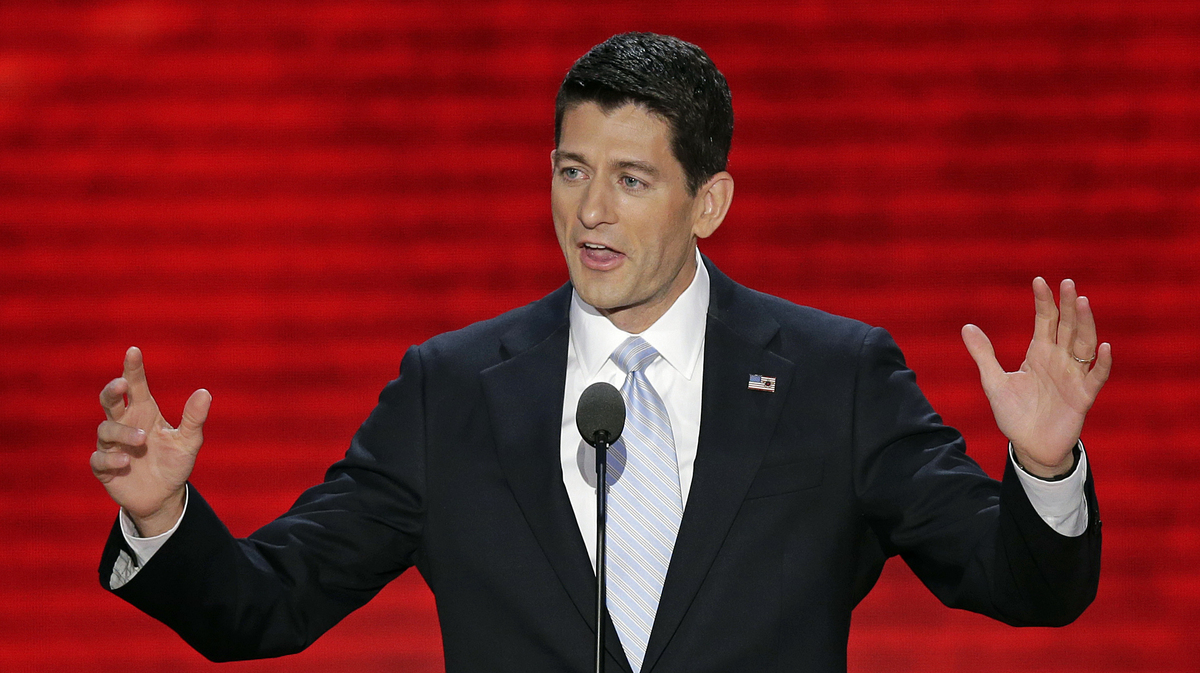 The second night of the Republican convention was an orchestrated buildup for Mitt Romney's running mate, Paul Ryan.

Ryan emerged at the evening's end to deliver the payoff speech and introduce himself to a national audience. He did a rousing job of it, delivering the session's most memorable material with stark intensity.

That brought the convention crowd to its feet, as did any number of anti-Obama zingers. But Romney didn't choose Ryan just for his speaking skills. Ryan provides him with an eloquent advocate, to be sure, but other criteria were even more important.

Ryan adds excitement to the GOP's presidential ticket. He is only 42, but the excitement is about something more than youthful vigor. Ryan turns on conservatives with his incandescent devotion to a set of ideas. He is steeped in his world view, and the electricity he exudes comes from his deep-seated sense of certainty.

Ryan is a true believer, much like two previous politicians he has sought to emulate: Ronald Reagan and Jack Kemp. Ryan admired both while growing up, and when he graduated from college in 1992, he became a speech writer for Kemp. 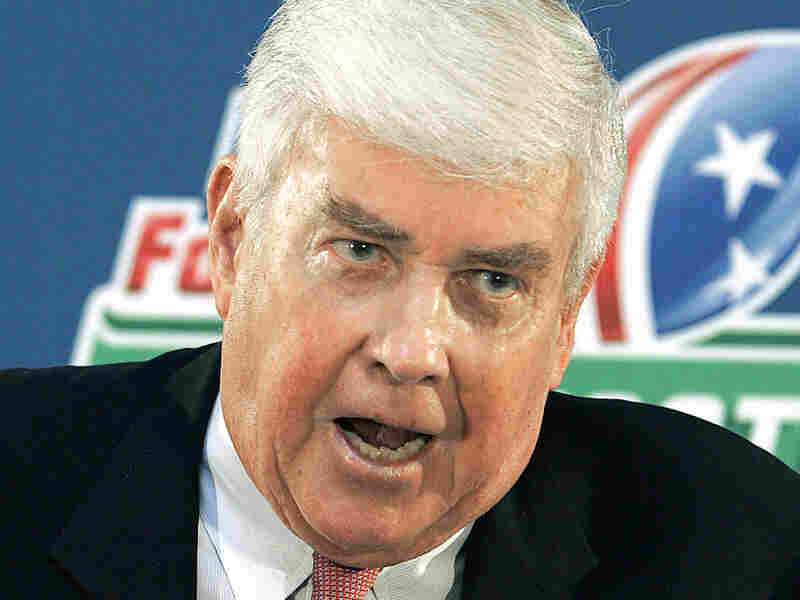 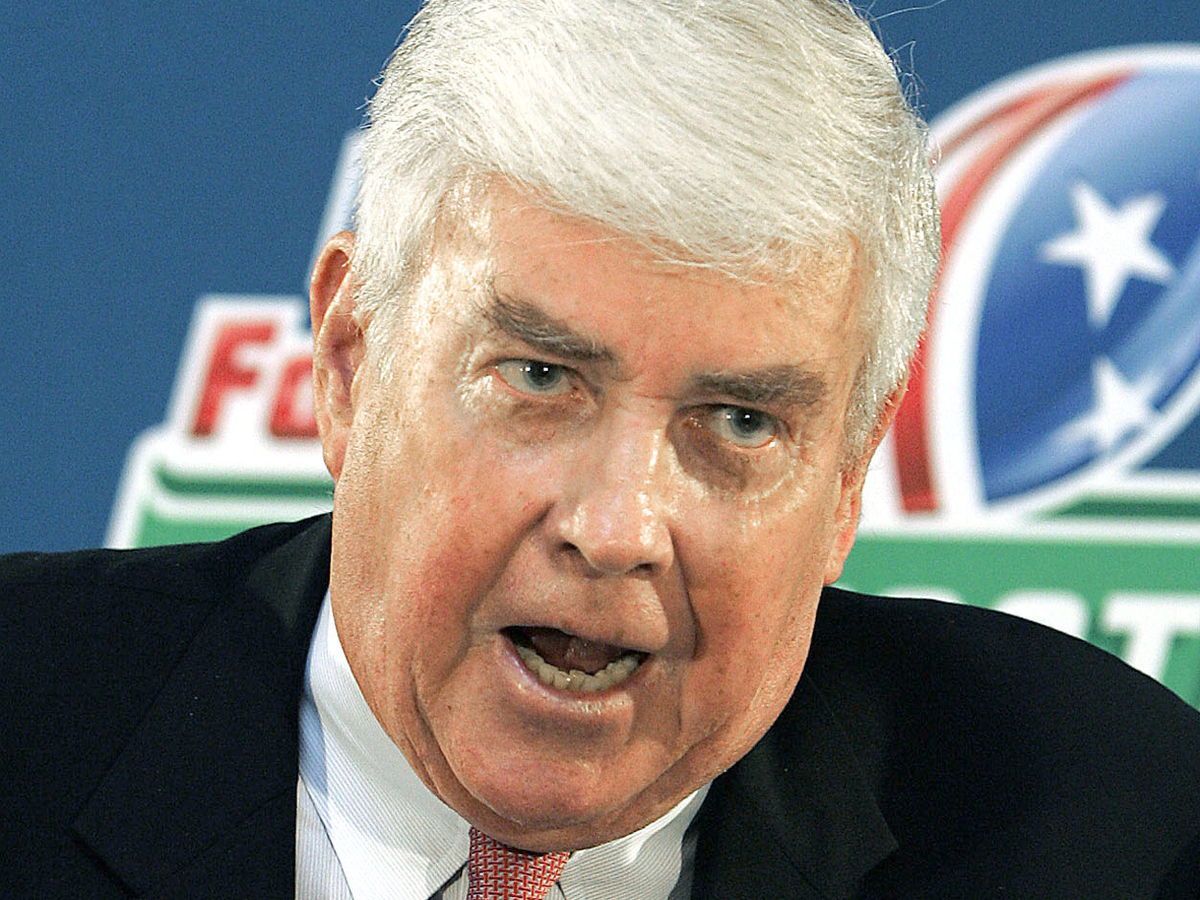 In Wednesday night's address, Ryan said he "learned a good deal about economics, and about America" from Jack Kemp, seen here in August 2006.

He saluted that influence early in his convention speech: "I learned a good deal about economics, and about America, from the author of the Reagan tax reforms — the great Jack Kemp. What gave Jack that incredible enthusiasm was his belief in the possibilities of free people, in the power of free enterprise and strong communities to overcome poverty and despair. We need that same optimism right now."

Ryan might as well have added that we need that same kind of economics right now. He clearly believes that we do. But not everyone thinks so, even among conservatives. Kemp was a walking controversy 30 years ago, when still a rising star in Congress.

When Kemp was first peddling his magic "supply side" formula in the 1970s, he drew audiences primarily because he had been a star quarterback for the Buffalo Bills. Orthodox conservatives asked him how his tax cuts would affect the budget deficit (then measured in tens of billions of dollars per year) or the national debt (then approaching $1 trillion). Kemp said the tax cuts would promote so much economic growth that the deficit would shrink. Reagan bought into the theory and got Congress to enact a 25-point reduction in the income tax rates over three years.

What followed was a decade in which the federal debt tripled to nearly $3 trillion, its largest peacetime expansion ever in percentage terms. Reagan would explain that he had not gotten the kind of spending cuts he wanted to go with the revenue reductions. But the deficit also grew because defense spending was expanded at a rate never seen before in peacetime.

Kemp saw all this and never lost faith. Publicly, he still thought the booming economy justified the tax cuts. Privately, he went further, telling other legislators that deficits did not matter and that the GOP needed to "stop being the party of root canal."

Other Republicans and conservatives objected at the time, and many still do. Kemp often crossed swords with Reagan's first budget director, David Stockman, who hated deficits and debt enough to urge much tougher decisions on the White House, Congress and the voters themselves. Stockman fought his fight, lost and left the administration.

Stockman has spent the past quarter-century in the private sector but still comments on the public side. He recently weighed in on the subject of Ryan's budget, an evolving set of proposals for lowering taxes on income and investment.

Among other things, Stockman objected to Ryan giving a pass to defense spending, the same bugaboo that drove the deficit debate three decades ago. Beyond that, he writes: "The Ryan plan boils down to a fetish for cutting the top marginal income-tax rate for 'job creators' — i.e. the superwealthy — to 25 percent, and paying for it with an as-yet-undisclosed plan to broaden the tax base."

In the end, even Ryan himself does not say his plan will balance the budget anytime soon. Although the tax cuts would be immediate, the notional point of balance wouldn't come even in theory until 2040. That statement alone is enough to shock most of his supporters. But eliminating the deficit or reducing the existing debt is simply not the ultimate goal of the Ryan plan. Reducing it to a smaller percentage of the economy is considered important, but shrinking the size of nondefense government and reducing taxes are far more important.

That's the same set of priorities Jack Kemp pursued in the Reagan era. Kemp died in 2009, five years after Reagan's death. But this week in Tampa, those priorities are alive again in the elevation of their acolyte from Wisconsin.