Accessibility links
With Tears And Thanks, Friends Add Context To Romney's Mormon Faith : It's All Politics Testimonials from friends speaking to the nation from the state of the Republican National Convention began the process of both explaining his faith and painting a picture of a man it hopes most Americans can relate to — and, of course, vote for.

With Tears And Thanks, Friends Add Context To Romney's Mormon Faith

With Tears And Thanks, Friends Add Context To Romney's Mormon Faith 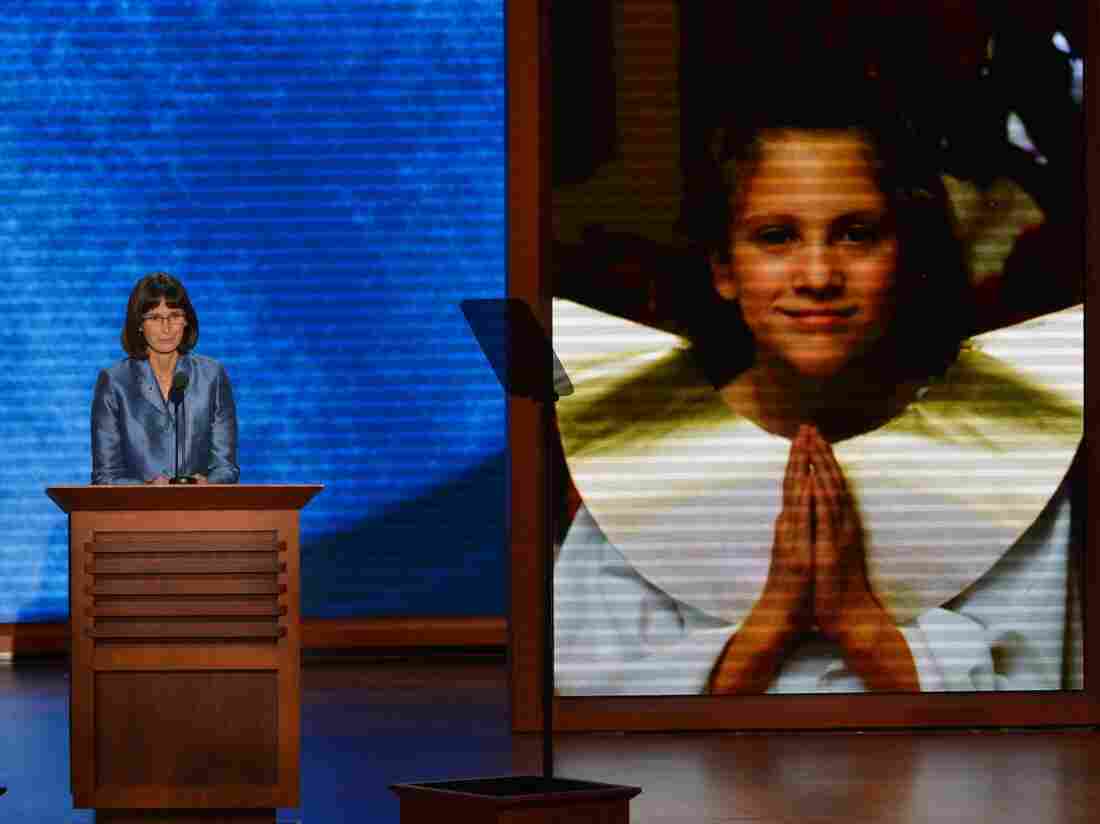 Pam Finlayson from California tells of how Mitt Romney helped her family when her daughter was ill and after the young woman died. Stan Honda /AFP/Getty Images hide caption 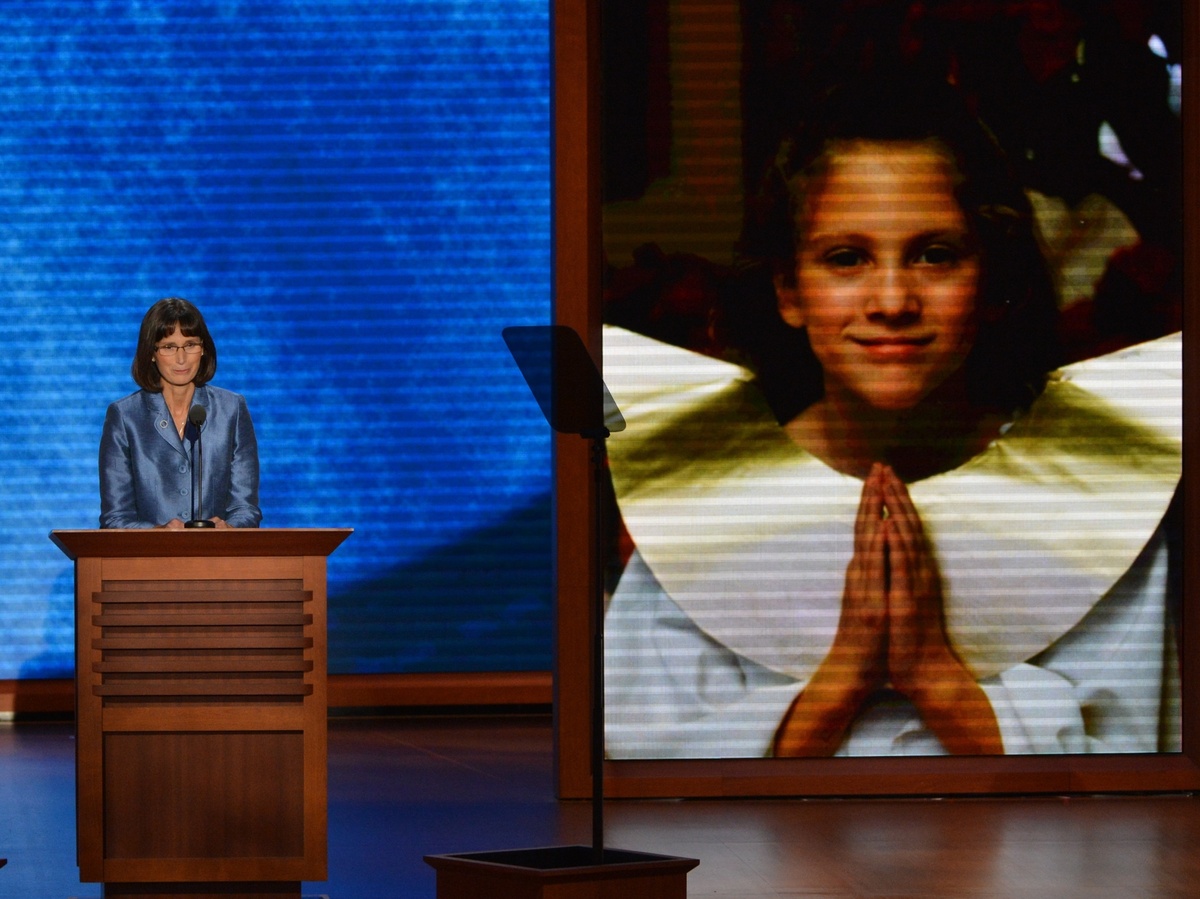 Pam Finlayson from California tells of how Mitt Romney helped her family when her daughter was ill and after the young woman died.

One of the most discussed and least discussed parts of Republican presidential nominee Mitt Romney's life has been his faith.

Many stories have been written about Romney's membership in the Church of Jesus Christ of Latter-day Saints and how being a Mormon might or might not affect his chances to one day be president.

But Romney hasn't spoken a lot about being a Mormon.

Tonight, his campaign began telling America about how the former Massachusetts governor puts his faith into practice.

As we wrote over in our live blog of Thursday's action at the convention, Craig Bennett, a friend of Romney's and a fellow member of the Church of Jesus Christ of Latter-day Saints, was the first speaker so far this week to talk at length about the candidate's Mormon faith.

He began by telling delegates that the church, has "an unpaid, lay clergy."

"So," Bennett asked, "what specifically did Mitt Romney do as our pastor?"

"For one or two evenings each week and several hours every weekend — week after week and year after year — he met with those seeking help with the burdens of real life, burdens we all face at one time or another: unemployment, sickness, financial distress, loneliness.

"Mitt prayed with and counseled church members seeking spiritual direction, single mothers raising children, couples with marital problems, youth with addictions, immigrants separated from their families, and individuals whose heat had been shut off.

"To uphold the dignity — and respect the privacy — of those who came, he met with them in private and in confidence. He has upheld that trust.

"Mitt's response to those who came was compassion in all its beautiful varieties: He had a listening ear and a helping hand. ...

"Mitt taught faith in God, personal integrity, self-reliance and service to our fellow men. And Mitt did what he challenged us to do. He led by example.

"I treasure every minute we served together."

He was followed by friends of Romney's with heartbreaking tales of their children's deaths, and how Romney helped them through those terrible times.

Pat Oparowski of Vermont talked of her 14-year-old son's death more than 30 years ago, and how Romney often visited the boy:

"David, knowing Mitt had gone to law school at Harvard, asked Mitt if he would help him write a will. He had some prized possessions he wanted to make sure were given to his closest friends and family.

"The next time Mitt went to the hospital, he was equipped with his yellow legal pad and pen. Together, they made David's will. That is a task that no child should ever have to do. But it gave David peace of mind.

"So, after David's death, we were able to give his skateboard, his model rockets, and his fishing gear to his best friends. He also made it clear that his brother, Peter, should get his Ruger 22 rifle.

"How many men do you know would take the time out of their busy lives to visit a terminally ill 14-year-old and help him settle his affairs?"

Then Pam Finlayson, her voice breaking at times and her eyes appearing to tear up, told of how Romney helped as she and her husband struggled with the demands of a seriously ill baby. Twenty-six years later, that daughter died, and:

"In the midst of making the final decision to run for president — which had to be the most difficult of their lives — when they heard of Kate's passing, both Mitt and Ann paused, to personally reach out to extend us sympathy, and express their love.

"It seems to me when it comes to loving our neighbor, we can talk about it, or we can live it.

"The Romneys live it every single day."

With stories such as those, the Romney/Ryan campaign began both explaining the candidate's faith to the nation and painting a picture of a man it hopes most Americans can relate to — and, of course, vote for.