Accessibility links
Are You Better Off? Democrats In Charlotte Say It's Complicated : It's All Politics But most of them said that despite some disappointments, the president deserves four more years to see his policies through.

Are You Better Off? Democrats In Charlotte Say It's Complicated

Are You Better Off? Democrats In Charlotte Say It's Complicated 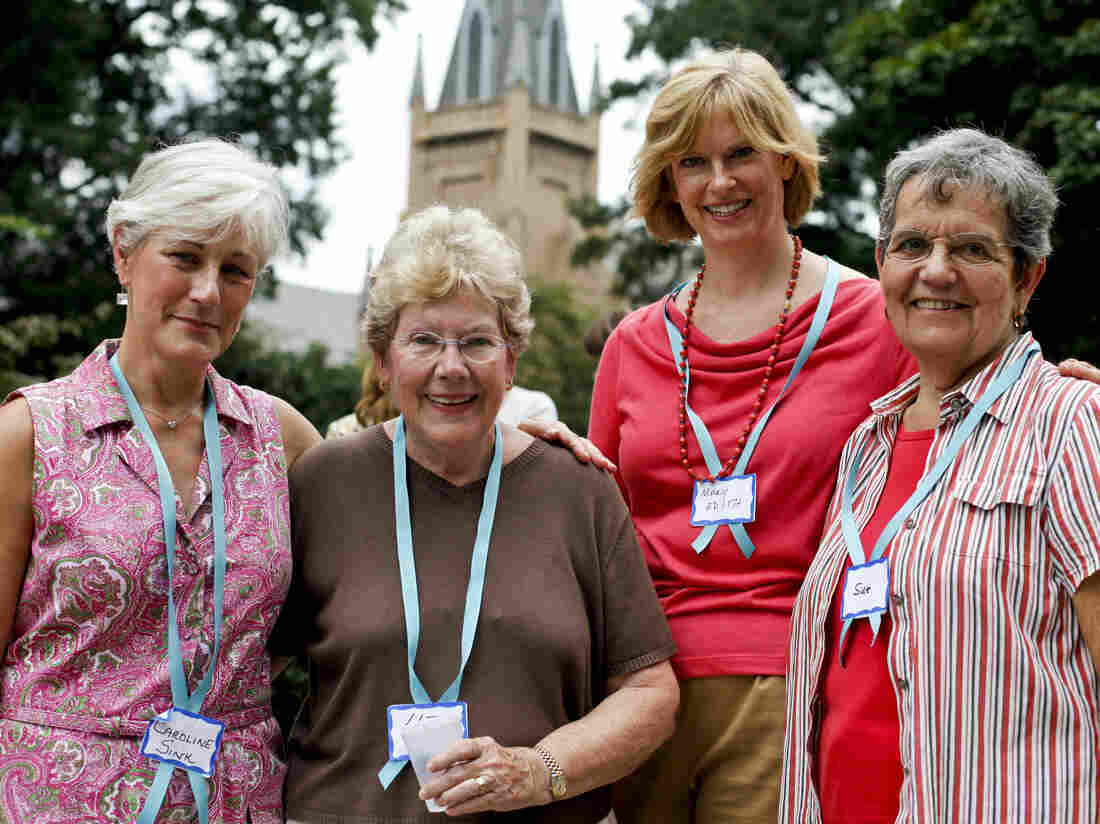 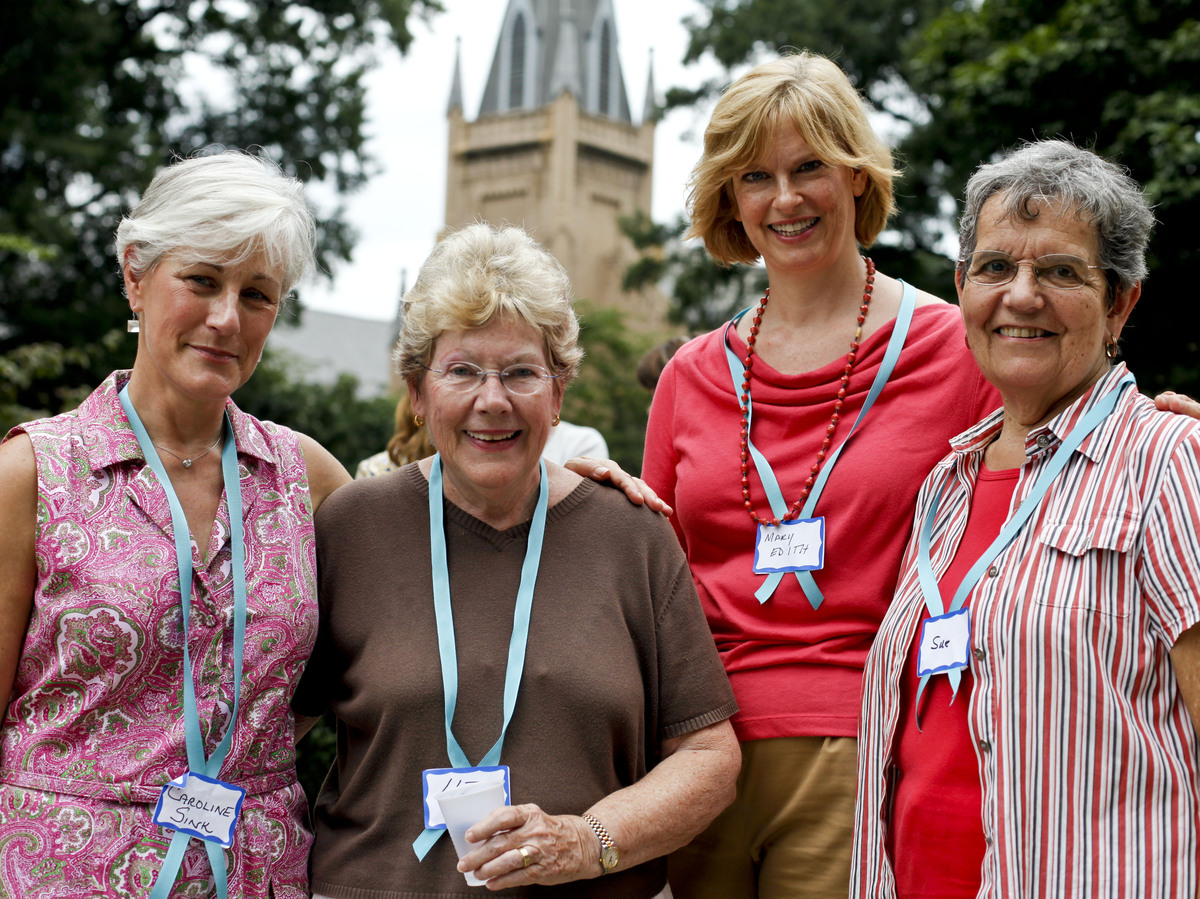 Caroline Sink (from left), Liz McKeithen, Mary Edith Alexander and Sue Collins were handing out lemonade and cookies in front of the First Presbyterian Church.

Are you better off than you were four years ago?

As Mark reported earlier, that's the question Republicans want Americans to ask themselves as they head to the polls this November.

The question was brought to the forefront after Democratic Gov. Martin O'Malley was asked that question on CBS' Face the Nation.

"No," he said. "But that's not the question of this election. The question, without a doubt, we are not as well off as we were before George Bush ..."

The Hill also released a poll today looking into the same question. It found that nearly a third of respondents felt the country was in a "better condition." About 15 percent said the country was about the same.

We wanted to get a feel for how people on the streets of Charlotte, N.C., with the Democratic National Convention on their doorstep, felt about that question. Overall, at first we got a quick and enthusiastic "yes." But as they thought it over, a more complex picture emerged.

About five blocks from the Time Warner Cable Arena, we stumbled upon the First Presbyterian Church. It's a majestic church, with an imposing spire, built in the 1800s. Some of its congregants were out on the lawn sipping lemonade and handing out homemade cookies to passersby.

It was an exquisitely Southern scene. Most there were Democrats, so when I posed the question, "Are you better off?" — they pounced.

"It would have been far worse had Obama not been elected," said Caroline Sink, a lawyer. "Not everything worked, but it takes two to tango," she added, referring to what she said was a Republican House that was intent on obstruction.

Mary Edith Alexander, an art curator, said that Obama had stabilized the economy, and "it's become better."

Another lady in the group, 77-year-old Sue Phillips, said that she was disappointed that President Obama had abandoned the Bowles-Simpson commission's deficit reduction plan.

"And I understand why [Obama] did it," she said — because he used up his political capital on health care reform.

We walked across the uptown area — as downtown here is known. It was buzzing with activity. Delegates were milling about, vendors hawked pins, T-shirts and pictures of the president and the first lady. And every few blocks, there were anti-abortion protesters.

On the outskirts of downtown, right in front of the NASCAR Hall of Fame, was the officially sanctioned "free speech zone," a green area surrounded by barricades, where protesters were given a stage and microphone to air out their grievances. 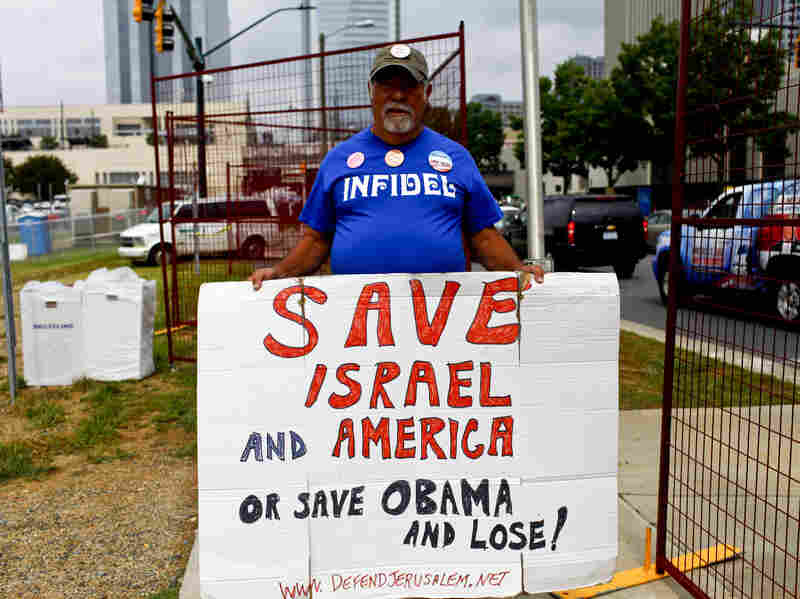 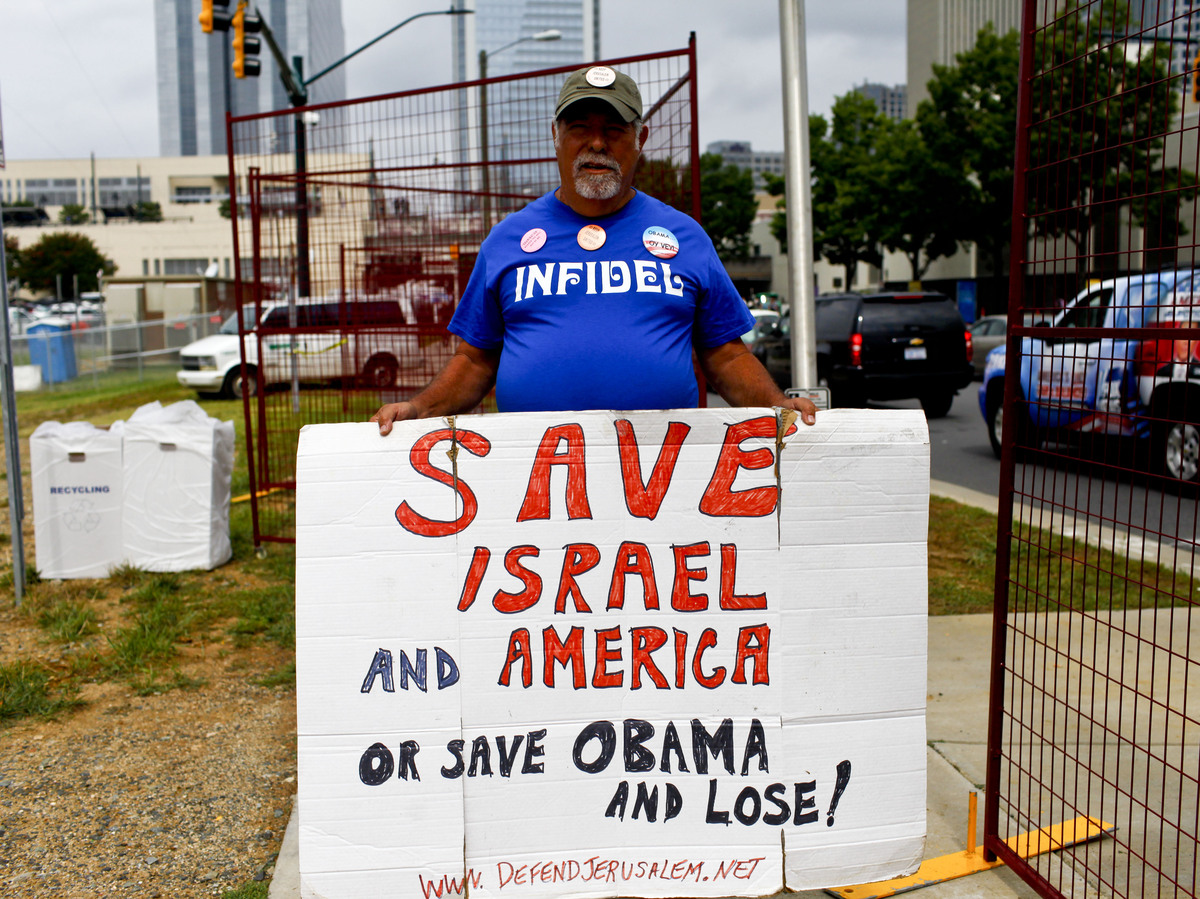 That's where we met Bob Kunst, who said he was the president of Shalom International in Miami Beach, Fla. He said he drove to Tampa for the Republican National Convention, and just kept driving up the coast and on to Charlotte.

He was inside the pen, wearing a blue shirt emblazoned with the word "infidel," and he wore a button that said, "Oy vey Obama."

When I asked him if he was better off, he answered the question in terms of foreign policy. Obama, he said, has caved to Islamists like the Muslim Brotherhood in Egypt, and he has allowed Iran to get closer to a nuclear weapon.

No, he's not better off, he said, because after four years, Obama has left Israel in a precarious state.

We kept walking. Past the restaurants, past the throngs of reporters, until we got to the Time Warner Cable Arena. You can't really get anywhere near the place without credentials. Every car is checked, and the crosswalks are locked down by metal barricades. 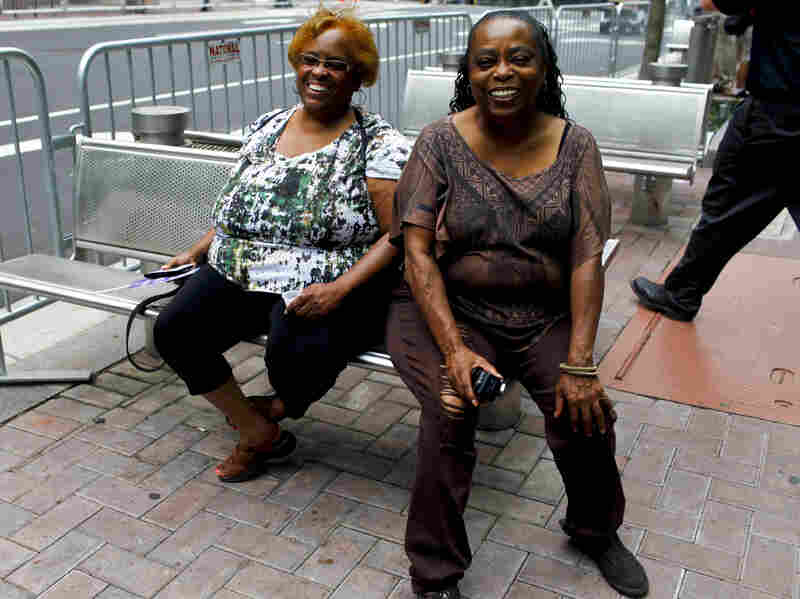 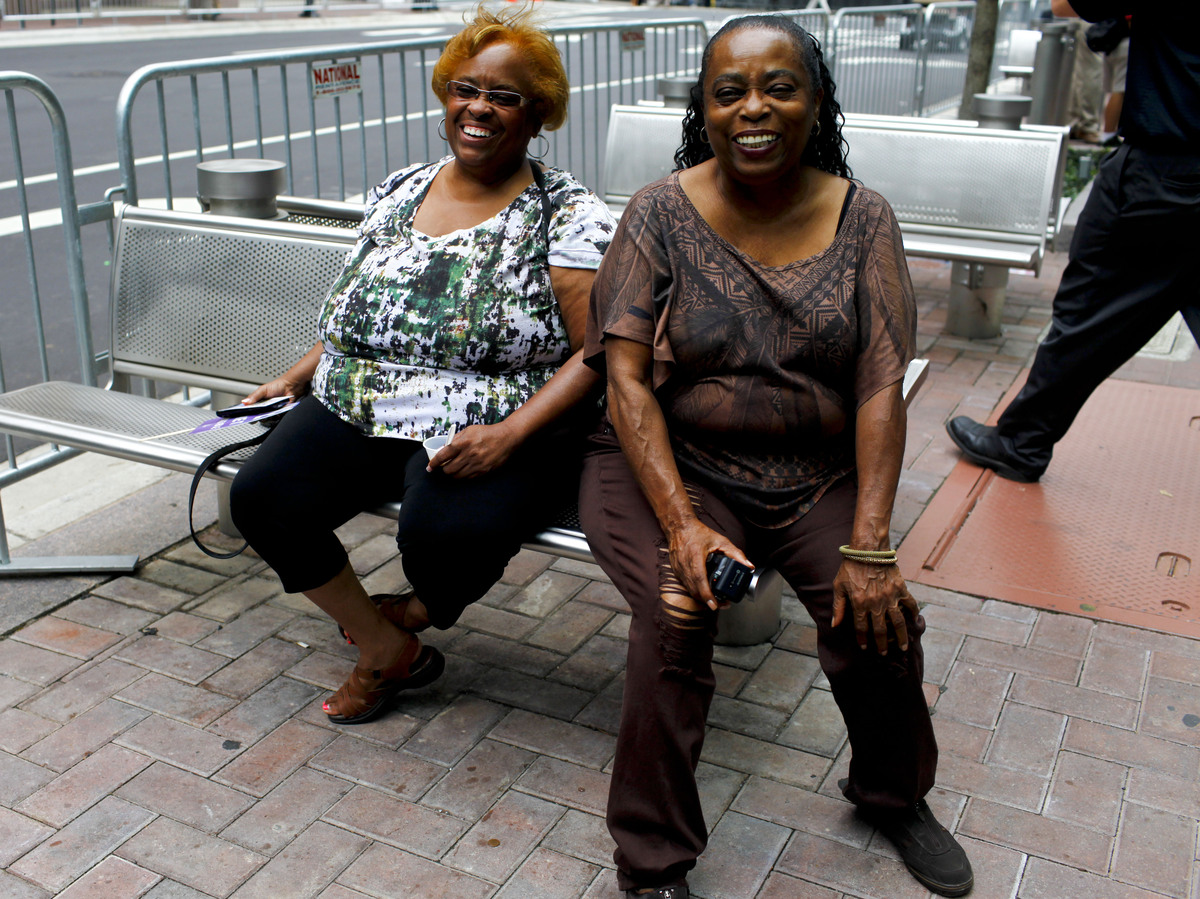 Creola Boswell (left) and her sister Susie Collins flew to Charlotte from California to enjoy the convention atmosphere.

But Creola Boswell, 69, and her sister Susie Collins, 58, flew from California to be here.

They were sitting on a bench in the shadow of all the arena security. They were eating ice cream and taking in the scene.

Boswell said Obama's presidency has made things better for her as an individual. She's retired and on a fixed income, and her tax bill went from $1,000 in the Bush years to nothing in the Obama years. Her grandson, whom she said had a medical condition, was able to attain insurance because of Obamacare.

Is she better off? Absolutely. What frustrates her, she said, is the American people "don't understand what he's done."

"No one is going to be perfect," her sister Susie added. But Obama pulled the country out of a recession, she said, and he deserves more time to see his policies through.