Accessibility links
Wonky Clinton Wows Convention In Muscular Obama Sales Pitch : It's All Politics Former President Bill Clinton packed his speech with policy and numbers, folksy asides accentuated with an Arkansas drawl, and a full-on attempt to rebut messages out of the GOP convention. While it's too early to call the former president Obama's closer, he came about as close as it gets. 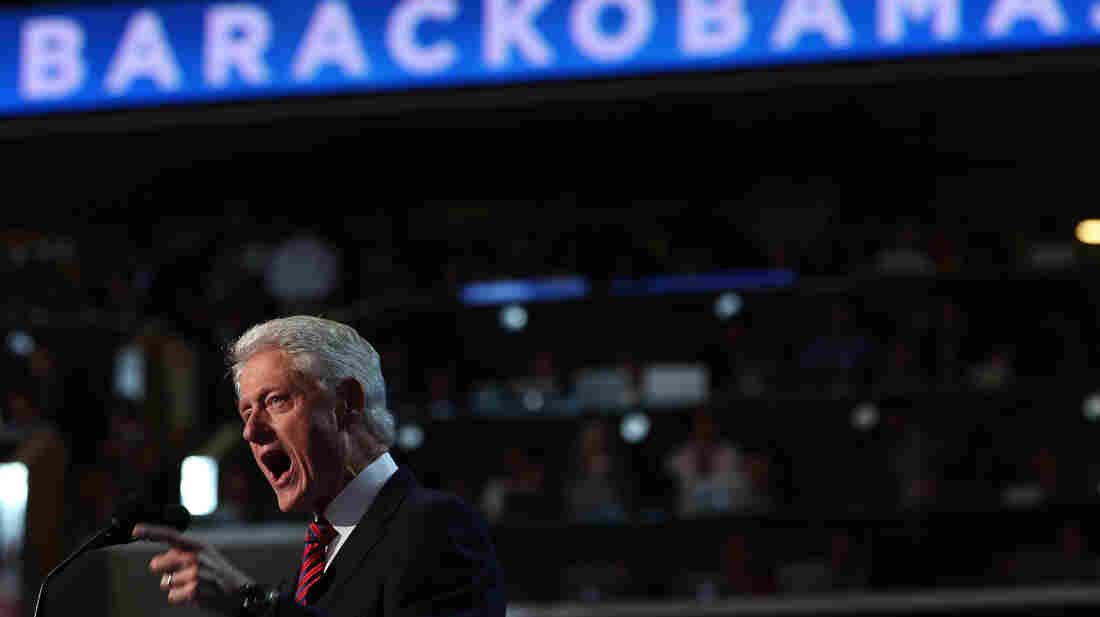 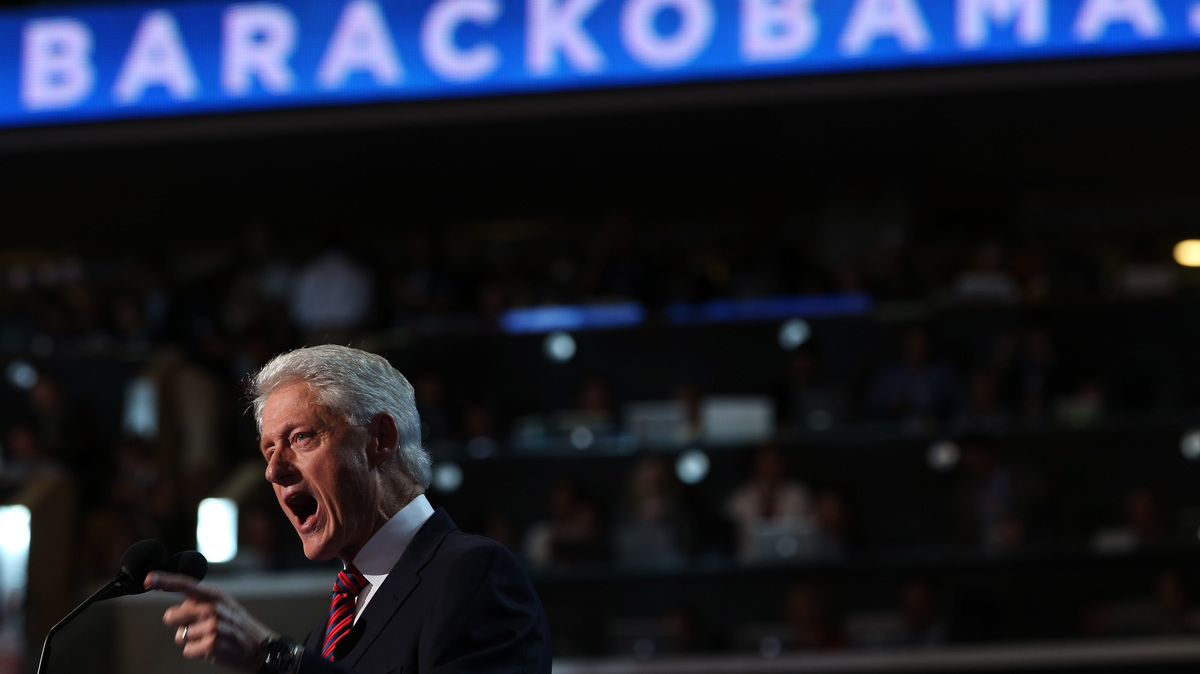 President Obama still has a case to make for a second term, and specific people to whom he needs to make it.

But while it's two months too early to call former President Bill Clinton Obama's closer, he came about as close as it gets Wednesday night at the Democratic convention with a bravura defense of the current White House occupant.

"We are here to nominate a president," Clinton said after strolling onto the stage to tumultuous applause, "and I've got one in mind."

What followed was a familiar and classic Clinton performance, tailored not to the audience in the Charlotte arena — or mindful of the ticking clock — but to those watching at home, especially in battleground states like Ohio and Michigan.

He packed his speech with policy and numbers, folksy asides accentuated with an Arkansas drawl, and a full-on attempt to rebut the messages out of the GOP convention last week in Tampa. Point by point, and with a special, smiling sarcasm for assertions made by GOP vice presidential nominee Paul Ryan and his Medicare and Medicaid spending proposals. 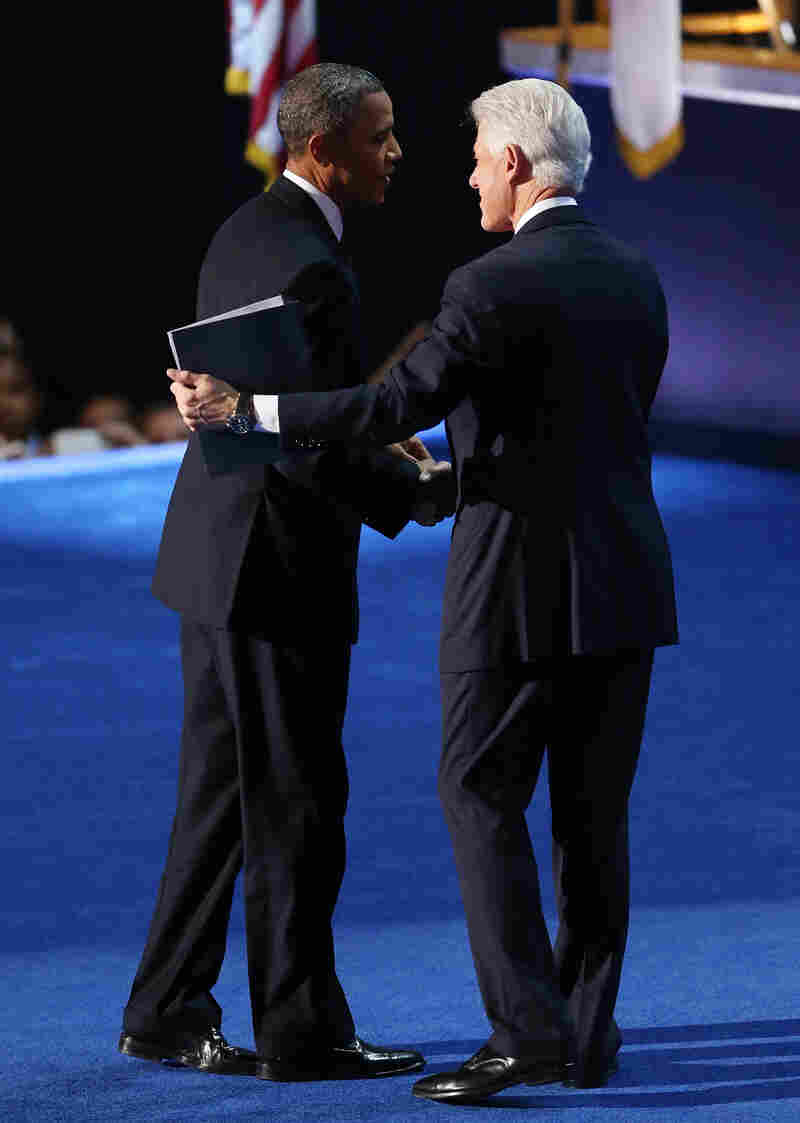 But perhaps more important than Clinton's Republican convention rebuttal, and contrasting the two parties, was his attempt to build a bridge over which reluctant voters worried about the economy could walk to the Democrats' — and Obama's — side in November.

His argument was economic and personal.

He spoke of the deeply damaged economy Obama inherited, one that was shedding 750,000 jobs a month — a scenario worse, he said, than the one he faced when elected in 1992. But Obama "stopped the slide into depression" and has built a floor under the economic cracks, Clinton said, and started a foundation.

"Are we where we want to be today?" he asked. "Is the president satisfied?"

"But are we better off than when he took office?" he asked.

The challenge to Obama is speaking to people who are not yet feeling the slow recovery taking place. Renew the president's contract, he said, and "you will feel it."

On the personal side, Clinton tapped into polls showing that Americans hunger for a functioning government and leaders who compromise. He made his case for Obama as committed to constructive work and derided what he characterized as the far right's overt hatred of the president, which has included rooting for his failure.

"Democracy does not ... have to be a blood sport," he said. "It can be an honorable enterprise that advances the public interest."

Obama and Clinton's wife, Hillary, proved that, the ex-president said, when, after their bitterly fought 2008 primary Obama named several of Hillary Clinton's people to top positions. "Heck," Clinton said, "he even appointed Hillary."

If there remain Obama-leaning undecided voters in Ohio, or in Michigan, or in any other battleground state after Clinton's stemwinder that ended in an onstage embrace with the current officeholder, it's unclear what more can be said.

Well, with Clinton, there's always more to be said.

Here's how he characterized the Republicans' economic plan:

"In Tampa, the Republican argument against the president's re-election was actually pretty simple — pretty snappy. It went something like this: We left him a total mess. He hasn't cleaned it up fast enough. So fire him and put us back in."

The crowd in the arena roared. It will take a little longer to see how the folks at home in Ohio and Michigan react.

But later, in the early hours of Thursday morning, Ohio delegates were given the honor of having their votes put Obama over the top as the nominee.