Accessibility links
What The Democrats' Do-Over Really Says About Party Platforms : It's All Politics Democrats had to make some hasty and awkward changes to their 2012 platform. The GOP platform passed smoothly but contains some controversial language. Important as it is to set down in writing what a political party believes in, it has become increasingly verboten to talk about it too publicly. There are two big reasons why.

What The Democrats' Do-Over Really Says About Party Platforms

What The Democrats' Do-Over Really Says About Party Platforms 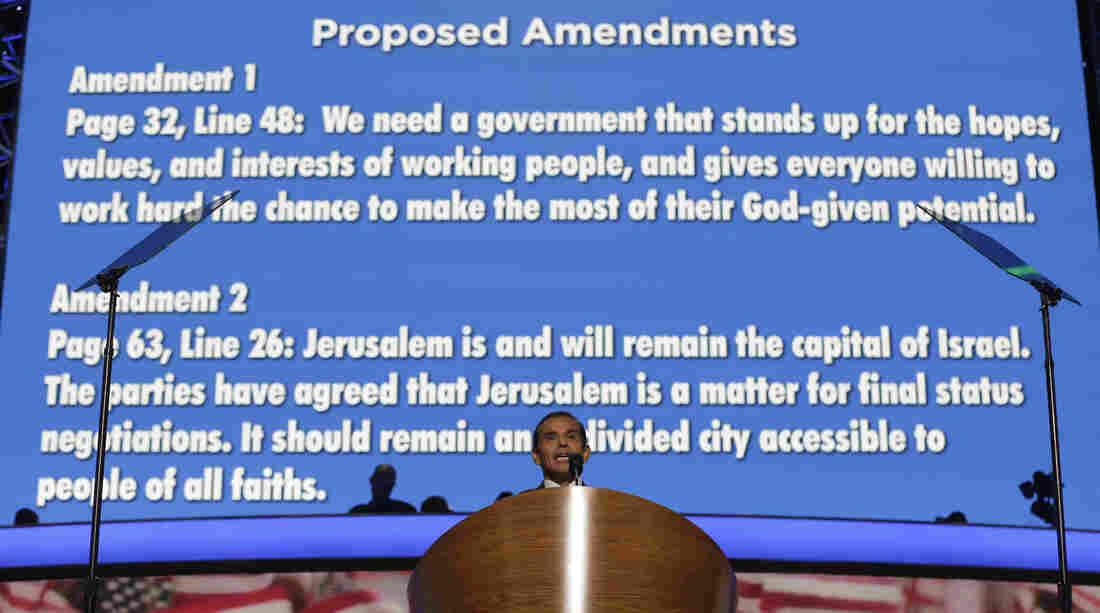 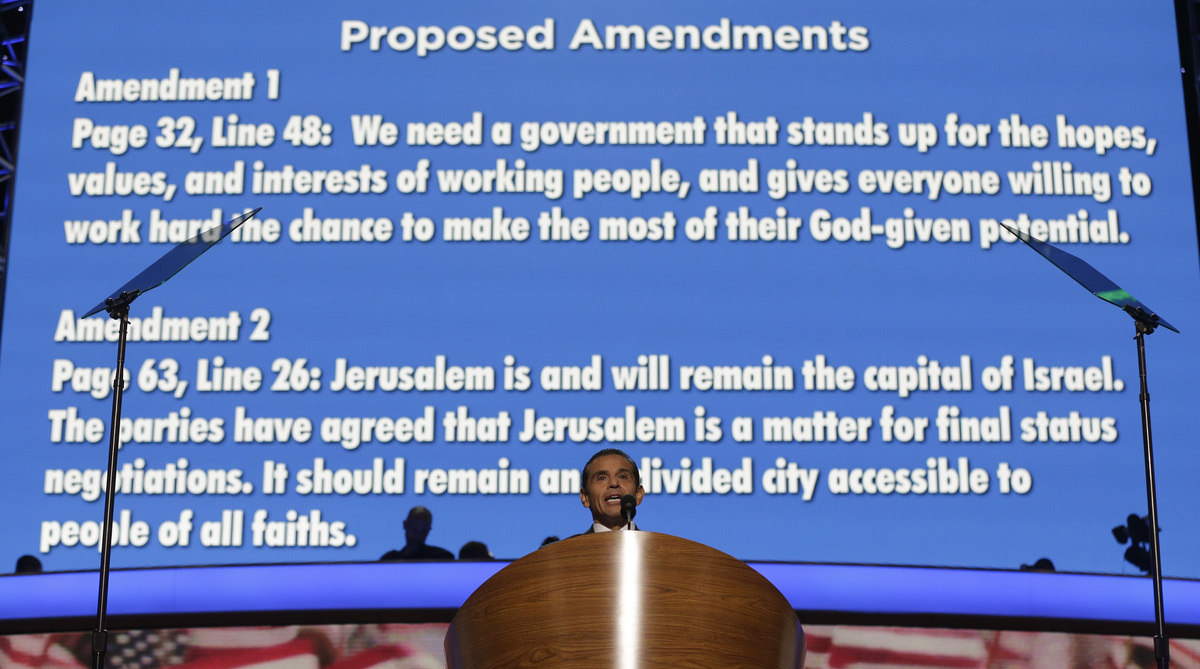 Los Angeles Mayor and Democratic Convention Chairman Antonio Villaraigosa calls for a vote to amend the platform Wednesday at the Democratic National Convention in Charlotte, N.C.

Party platforms are like contracts: No one bothers to read them until something bad happens.

We all know that parties to any agreement should study the fine print in advance, and surely that applies to the national political parties. The delegates really ought to spend some of their time in the host city studying the document they are voting to adopt.

But hey, it's a convention. It's a party. Who wants to sit in their hotel room and read?

Platforms can lead to awkward moments, and worse. At the Democratic convention this week, literally thousands of journalists have been left stalking the streets starved for news. It took no time at all for virtually every media outlet to pounce on a controversy that arose over two religion-related items in this year's Democratic Party platform.

It turns out this year's platform committee dropped a few words from the 2008 version — leaving out language proclaiming Jerusalem the capital of Israel, and excising the "God-given" from a 2008 passage that supported all Americans' right to "make the most of their God-given potential."

Both changes offered a point of attack for Republicans, who said it showed a lack of commitment to Israel and a lack of respect for God. In response to the contretemps, and at the direction of the Obama campaign, the convention reopened the platform on its second day and restored the 2008 language.

That disturbed some of the delegates who either liked the changes or disliked the process by which they were reversed — or both. At the Wednesday night session, three voice votes were taken before the platform was re-approved. That drew further unwanted attention to the whole matter, disrupting the spirit of unity that has otherwise suffused this gathering.

At the Republican convention a week earlier, the platform was approved without discussion or audible dissent. Ron Paul delegates who wanted changes in the platform decided instead to make their stand on a controversial change to convention rules. They, too, were steamrolled on voice votes by the party powers that be.

But Republicans could have more of a problem if swing voters become aware of certain elements of their platform between now and November. Some groups representing Hispanics are angry about the border fencing language, and some women have objected to a platform that bans abortion without an exception for rape or incest.

Still, for all the nettlesome details in both platforms, neither party was going to spend much time — and certainly no prime time — airing its platform in public at convention time. Important as it is to set down in writing what the party believes in, and what its candidates would presumably work toward in office, it has become increasingly verboten to talk about it too publicly.

There are two big reasons for this.

First, the convention itself is no longer a deliberative body making decisions about candidates and positions. All of that has been settled before the convention, which is no more than a made-for-TV event meant to sell the party's line of products. This is equally true for both major parties. (The minor parties are another story.)

Platforms do not make for good TV. They must be read. No one has yet devised a platform video, or a platform song. Rap would seem to offer an intriguing possibility. But so far, at least, neither party has gone that route.

Lost in this post-modern, media-centric world, the platform committee is generally at the service of the nominee, who may dictate its language so as to fit his or her views. More often, however, the platform is used as a pressure valve for activists within the party's base. These are the people who are rarely satisfied with the nominee's commitment to party catechism (or with the nominee, for that matter).

And that is the other reason platforms have become too hot to handle: The party catechisms keep getting more orthodox. Rather than seek language that brings together the various wings of the party, the contemporary platformers are eager to please those they agree with themselves.

But as Dixie has shifted over the past 50 years from its Democratic roots to a hard tilt toward Republicans, the two parties have both moved away from the center. There are elements within each that still promote compromise or look for potential common ground. But most of them struggle to be relevant.

The typical platform committee now thinks the nominee needs a steady diet of red meat in order to bulk up and "get out the base" in November. They tell each other that the nominee needs to "stand for something," which usually means a full-throated version of what they believe themselves.

So the platform becomes less alluring for candidates in pursuit of swing voters. Fewer actual politicians want to embrace it, or at least not when everybody's watching.

Robert Dole, the GOP nominee in 1996, was typically blunt when asked about that year's platform. He said he hadn't gotten around to reading it — which was his way of turning aside questions about thorny social issues, or issues on which he might disagree with his running mate, Jack Kemp. That gave leave to other candidates down-ballot to distance themselves from their own party manifestos.

Dole was simply being more forthright than most, acknowledging the relative indifference that nominees have shown to their platforms in recent decades. The platform itself is a relic from the days when the parties were far more important institutions. Presidential nominees were chosen largely by the same party insiders who chose candidates for Congress and for local offices as well.