Accessibility links
Politics, The Pledge And A Peculiar History : It's All Politics Every so often, the Pledge of Allegiance gets wrapped up in a political campaign, often with the conservative candidate or group suggesting the other side is anti-American or anti-God. And each time, the actual history of the pledge is either ignored entirely or glossed over.

Politics, The Pledge And A Peculiar History

Politics, The Pledge And A Peculiar History 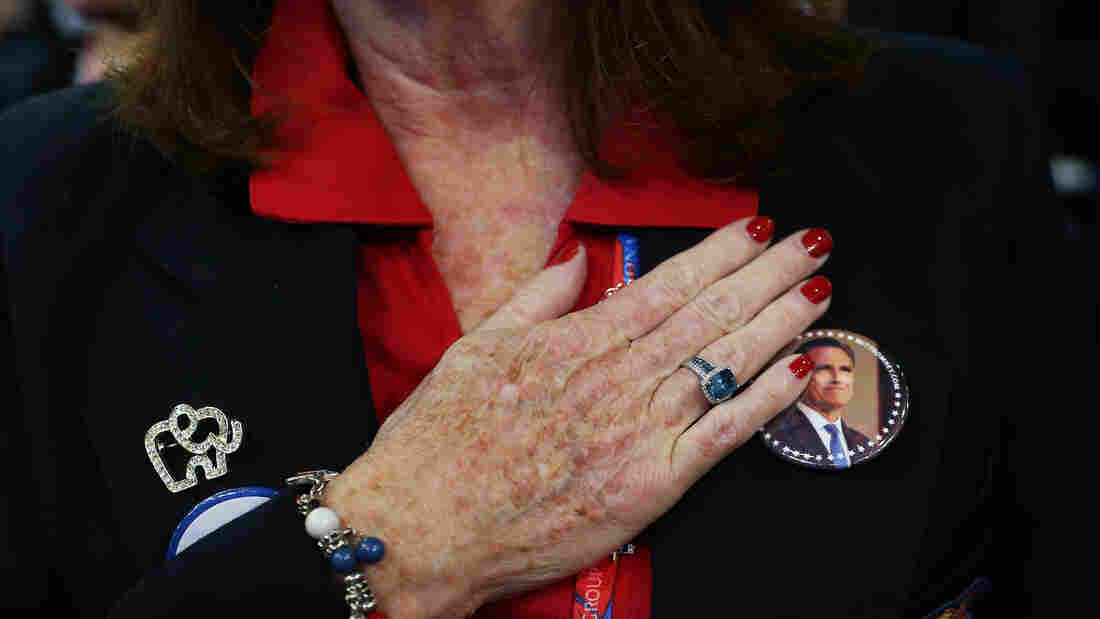 A woman recites the Pledge of Allegiance at the Republican National Convention in Tampa, Fla., on Aug. 29. Spencer Platt/Getty Images hide caption 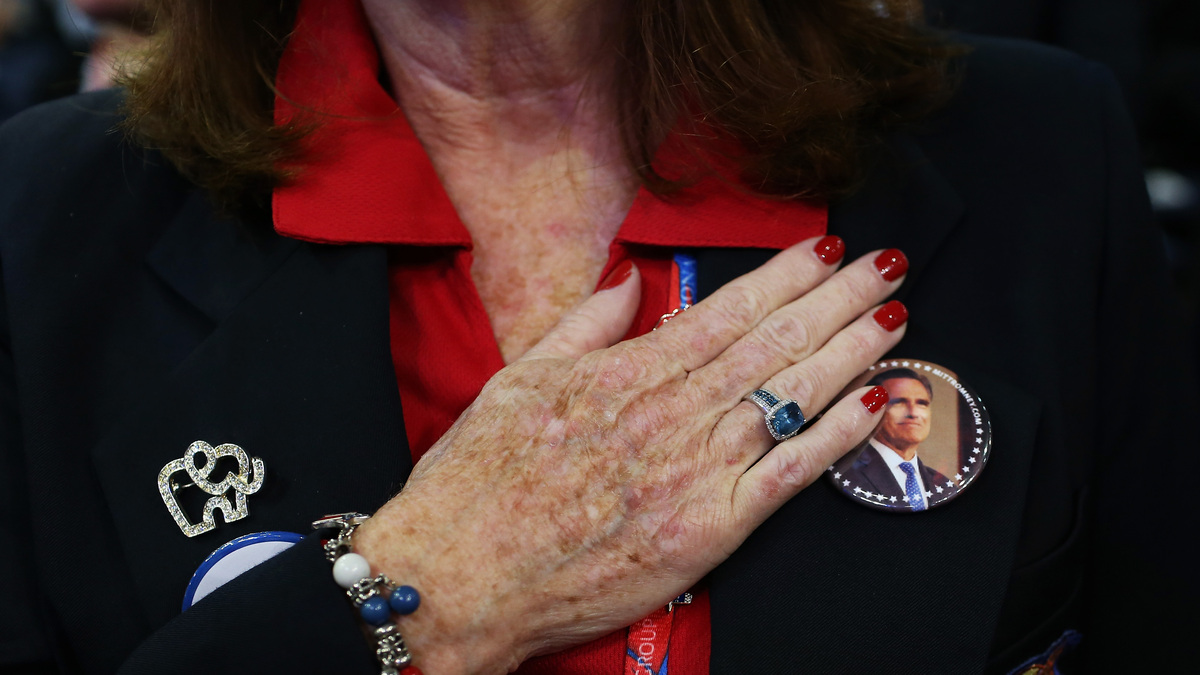 A woman recites the Pledge of Allegiance at the Republican National Convention in Tampa, Fla., on Aug. 29.

When Mitt Romney uses the Pledge of Allegiance as a metaphor for all that's good and right with America, how many in his audience know that the two-sentence loyalty oath was penned not by the Founding Fathers in 1776, but a fascist preacher more than 100 years later?

Or that the original recommended posture was with a straightened arm raised upward and outward? Or that it was changed to the hand over the heart during World War II after the Nazis adopted the original as their salute?

Every so often in politics, the pledge gets wrapped up in a legal battle or a political campaign, often with the conservative candidate or group suggesting the other side is anti-American or anti-God. And each time, the actual history of the pledge is either ignored entirely or glossed over.

On Saturday in Virginia Beach, Va., Romney unveiled a strategy of using the pledge to highlight his vision for the country and to criticize President Obama — in part for the Democratic Party's short-lived exclusion of the word "God" from the platform approved at its convention last week.

On Monday in Mansfield, Ohio, Romney again kicked off his stump speech by focusing line-by-line on the words of the pledge, reports NPR's Ari Shapiro.

Despite keen interest in the pledge's concepts, its origins are not likely to come up in any modern political speech. 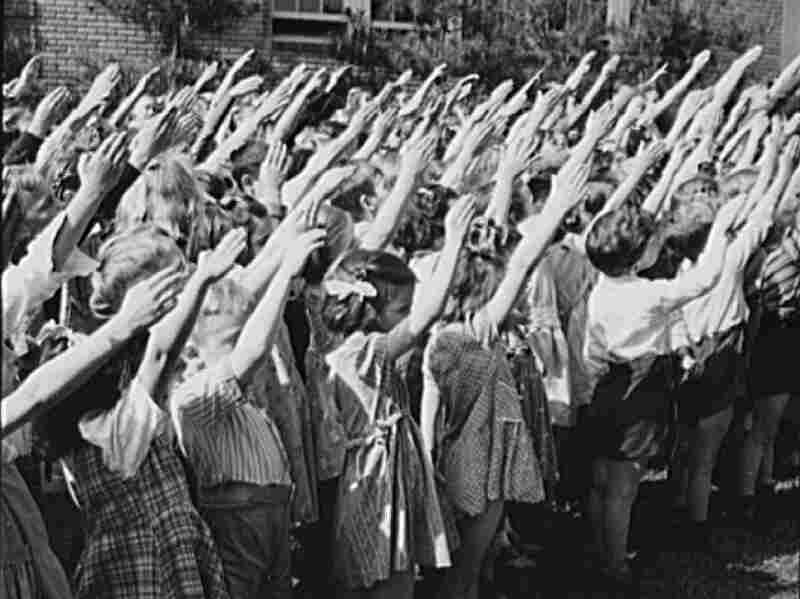 Schoolchildren in Southington, Conn., recite the Pledge of Allegiance in 1942, around the time the custom of placing a hand over the heart replaced the original hand position. Fenno Jacobs/Library of Congress hide caption 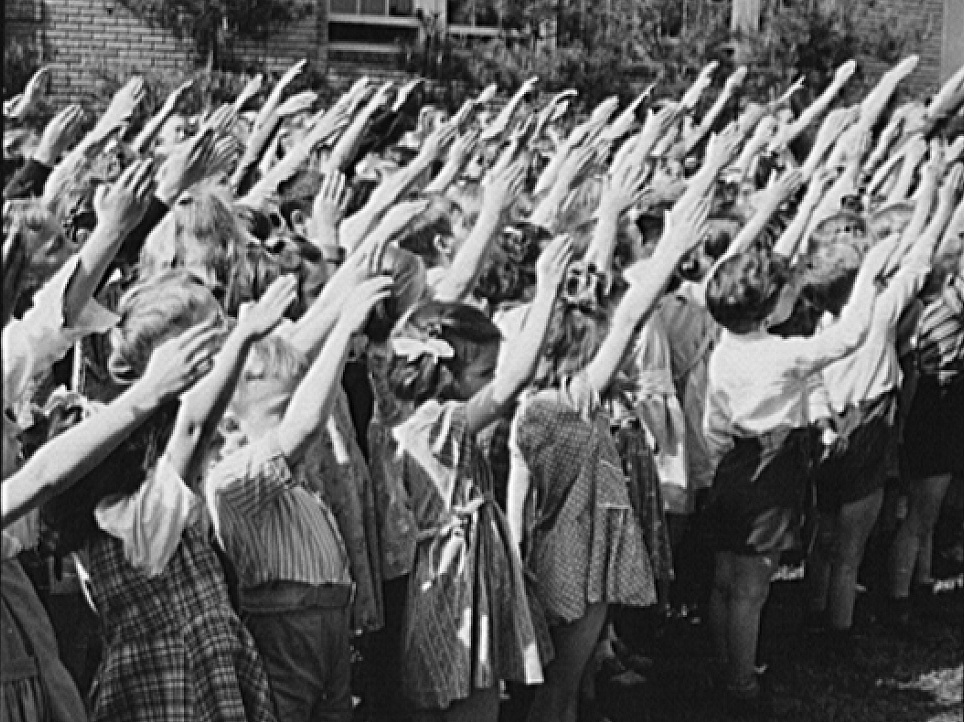 Schoolchildren in Southington, Conn., recite the Pledge of Allegiance in 1942, around the time the custom of placing a hand over the heart replaced the original hand position.

Francis Bellamy was a minister who was thrown out of his Baptist post because of sermons describing Jesus as a socialist. He and novelist cousin Edward Bellamy both saw a future for the United States as a country in which the government controlled virtually every aspect of a person's life.

Francis Bellamy (who also wrote for a magazine underwritten by flag sales and therefore stood to gain by having schools require a flag salute each day) and his friends got President Benjamin Harrison to incorporate Bellamy's pledge into the 400th anniversary celebration of Columbus' arrival in the New World. It has been recited in public schools ever since.

In 1954, amid anti-communist fervor, President Eisenhower and Congress added "under God" at the behest of a Presbyterian minister, George MacPherson Docherty. The Scottish immigrant became better known as a civil rights activist in later years, working with Martin Luther King Jr.

All this notwithstanding, the pledge has remained a recurring political hot button. Then-Vice President George H.W. Bush became its chief defender when running for president in 1988 against former Massachusetts Gov. Michael Dukakis, who had vetoed a bill requiring students to recite the pledge.

And many conservatives defended the pledge against legal challenges in recent years, winning federal appeals court rulings both in San Francisco and Boston.

Even some conservatives have noticed the seeming contradiction.

"It's ironic to see conservatives rally to such a questionable custom," Gene Healy, a Cato Institute scholar, wrote in 2003, when the California pledge case was originally in the news. "Why do so many conservatives who, by and large, exalt the individual and the family above the state, endorse this ceremony of subordination to the government? Why do Christian conservatives say it's important for schoolchildren to bow before a symbol of secular power? Indeed, why should conservatives support the Pledge at all, with or without 'under God'?"