Accessibility links
Ryan Slams Obama On Social Issues And Foreign Policy : It's All Politics Republican vice presidential nominee Paul Ryan used an appearance at an annual gathering of his party's social conservatives Friday to pointedly criticize President Obama's foreign policy record and to testify to his own Catholic faith and opposition to abortion. 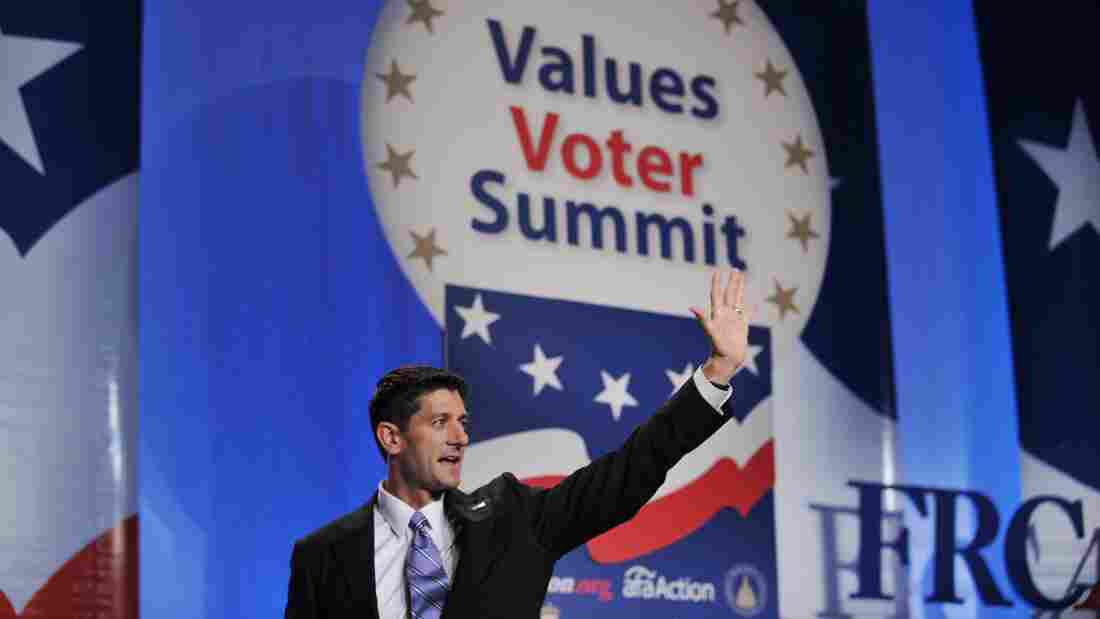 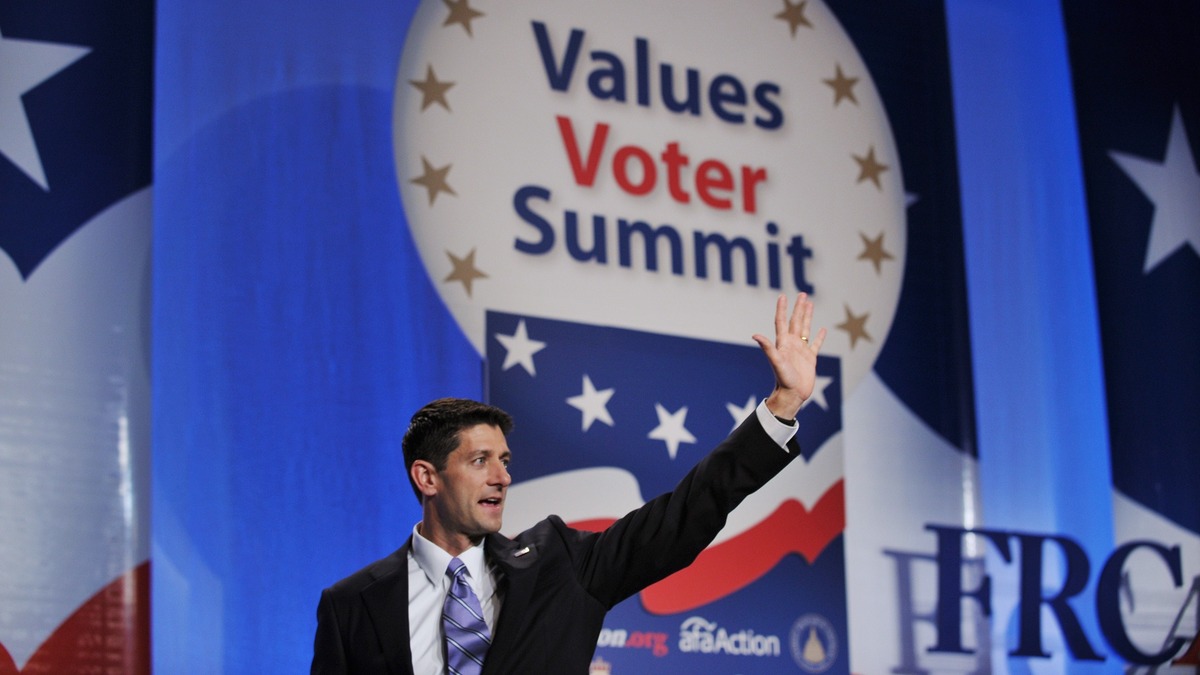 Republican vice presidential nominee Paul Ryan used an appearance at an annual gathering of his party's social conservatives Friday to pointedly criticize President Obama's foreign policy record and to testify to his own Catholic faith and opposition to abortion.

"We're all in this together," said Ryan, a representative from Wisconsin, echoing a theme of Obama's convention speech. "It has a nice ring."

"Yet how hollow it sounds coming from a politician who has never once lifted a hand to help the most helpless and innocent — the child waiting to be born," Ryan said, accusing the president of showing a "complete disregard for many pro-life Democrats."

It was some of the strongest anti-abortion language yet to come from the Republican ticket, and it resonated in Washington, D.C.'s Omni Shoreham Hotel ballroom, filled with about 2,000 members of the party's most conservative social wing. They were attending the Values Voter Summit, sponsored by the Family Research Council. GOP presidential candidate Mitt Romney, who once supported legal abortion but now opposes it, was campaigning in Ohio and did not appear at the event.

Ryan couched his comments in his Catholic faith and also called for the repeal of the president's health care overhaul legislation, which he characterized as a "threat and insult to every religious group" because of its contraception coverage mandates.

" 'Never mind your own conscience,' they were basically told," Ryan said. " 'From now on you're going to do things the government's way.' "

"Ladies and gentlemen, you would be hard-pressed to find another group in America that does more to serve the health of women and their babies than the Catholic Church and Catholic Charities," he said. "And now, suddenly, we have Obamacare bureaucrats presuming to dictate how they will do it."

Ryan also did not shy away from the foreign policy crisis that has enveloped Romney, Obama, and American interests throughout the Middle East and North Africa in recent days.

Citing first the "loss of four good men" in the Tuesday attack on the U.S. Consulate in Libya, Ryan suggested that the "equivocations" of the administration make extremists bolder and accused Obama of treating Israel with "indifference bordering on contempt."

His comments followed conservative Bill Bennett's robust defense of Romney's much-criticized comments during the unfolding crisis this week in Libya and Egypt.

Romney's words, Bennett said, had a "shock effect because they are true."

Proof of Romney's veracity, Bennett suggested, was the broad condemnation he received among the "establishment press."

He then added an abortion metaphor: "Much of the press jumped on this to kill this truth in the womb, something it is well practiced at."

Ryan argued that a "Romney and Ryan administration" would establish a foreign policy with "moral clarity and firmness of purpose."

Unlike some of the speakers who proceeded him — including House Majority Leader Eric Cantor of Virginia, and South Carolina Sen. Jim DeMint, who barely mentioned Romney by name — Ryan closed his comments by attesting to his running mate's good-neighbor bona fides. "A modest man," Ryan said of Romney, "with a charitable heart."

During his speech, Ryan was interrupted twice by hecklers, who were quickly removed by security.