Accessibility links
The End Of WASP-Dominated Politics : It's All Politics Mitt Romney and Paul Ryan compose the first presidential ticket in history not to feature a Protestant. And, of course, they're running against the first African-American president. All of these individuals point to an enormous shift in American demographics and political power.

The End Of WASP-Dominated Politics

The End Of WASP-Dominated Politics 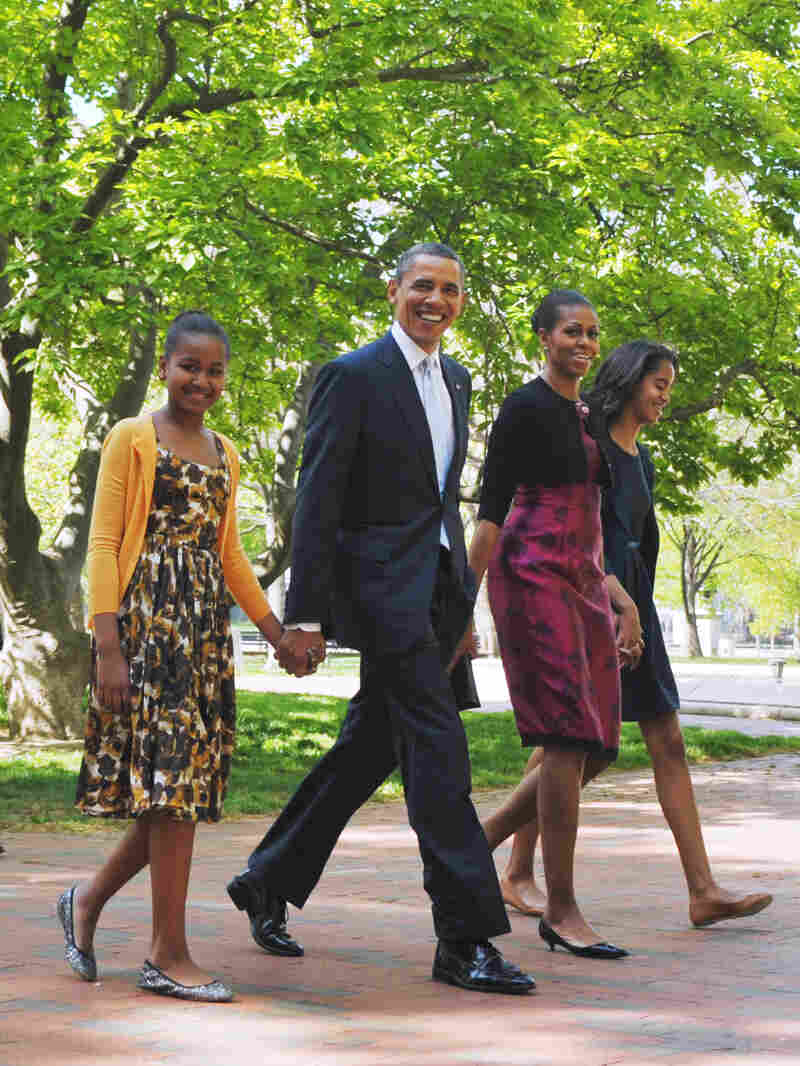 The Obamas walk back to the White House after attending Easter service at St. John's Episcopal Church on April 8. President Obama is the only Protestant on either 2012 presidential ticket. Mandel Ngan/AFP/Getty Images hide caption 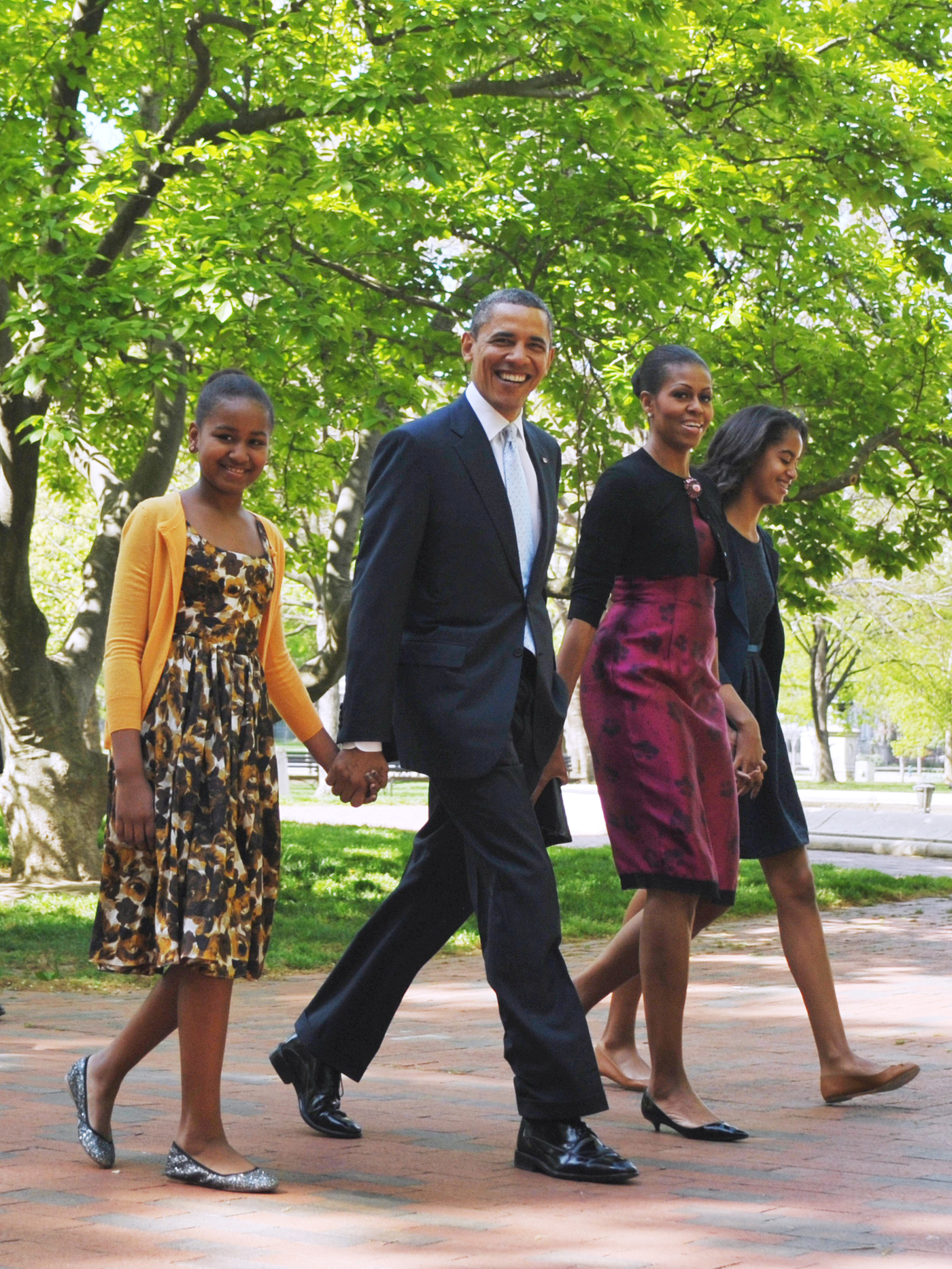 The Obamas walk back to the White House after attending Easter service at St. John's Episcopal Church on April 8. President Obama is the only Protestant on either 2012 presidential ticket.

Just looking at Mitt Romney and Paul Ryan, you might not think of them as cultural pioneers. But the Republicans make up the first presidential ticket in history not to feature a Protestant.

Romney is Mormon, Ryan, Catholic. That might not seem like such a big deal — especially when you consider they are running against the first African-American president.

But all of these individuals are emblematic of an enormous shift in both American demographics and political power.

Fifty years ago, the military, foreign service and top political offices were all dominated by WASPs — white, Anglo-Saxon Protestants.

"The minimal but unrelenting qualification was to be white, Anglo-Saxon in heritage and Protestant in religion," the cultural critic Joseph Epstein writes in his book Snobbery. "If one was Catholic, or surely Irish Catholic, or Jewish, forget about it; if one was black, don't even think about it."

Because of the country's changing population and shifts in educational opportunities, none of that is true anymore.

There are plenty of white men with power in this country, but it's become harder to find a WASP holding onto one of the top rungs of the political ladder.

The State Department was once dominated by old-stock aristocrats but hasn't been led by a white man since 1997. Among the four top congressional leaders, only one is a WASP — Senate Republican Leader Mitch McConnell of Kentucky, who happens to be married to an Asian-American.

The Supreme Court, for the first time in its history, does not boast of a single justice who is Protestant. Instead, there are three Jews and six Catholics — one of them Hispanic, one of them black. And since the 2009 confirmation of Sonia Sotomayor, the court also includes three women justices for the first time ever.

"Not a single group can hold onto power in any particular institution going forward," says Guy-Uriel Charles, founding director of the Duke Law Center on Law, Race and Politics. "This reflects the fact that we are much more of an open society than we were previously, but we are also a society that by the numbers is increasingly diverse."

The Importance Of Merit

None of this would have seemed possible a half-century ago. Back then, Protestants composed three-quarters of the academic, military and business elites, according to contemporary academic studies.

The rules were so rigid that Barry Goldwater, the Arizona senator and 1964 GOP presidential nominee, wasn't allowed to play golf at a club outside Washington that was literally exclusive.

"I'm only half Jewish, so can't I play nine holes?" Goldwater quipped, according to E. Digby Baltzell's classic 1964 study The Protestant Establishment.

But the exclusion of religious minorities from the top ranks of government had already begun to give way with the Great Depression and World War II. Real expertise and individual merit started to matter as much as coming from the right families (at least for men).

The '60s Changed Everything

Change really began to accelerate during the 1960s, for a number of reasons. The election of the first (and thus far only) Catholic president in John F. Kennedy, along with the modern reformation of the Catholic Church with the Second Vatican Council, precipitated shifts in religious alliances that have had profound effects on U.S. politics.

"Catholics, who used to be public enemy No. 1 for a lot of Americans, have been totally embraced, by the Republican Party especially," Preston says.

Civil rights laws began to break down barriers for black Americans, while the 1965 immigration law ended quota systems that had for decades heavily favored immigrants from Western Europe.

"All these immigrants started coming in from Latin America and Asia, many Catholic or not Christian," says David Hollinger, a historian at the University of California, Berkeley.

These voting rights and demographic changes made the presidency of Barack Obama possible. Obama lost the white vote in 2008, but the share of votes cast by minorities had doubled over the course of just five election cycles, from 13 percent of the electorate in 1992 to 26 percent in 2008.

Some of these cultural shifts helped pave the way for the Romney candidacy as well. Protestants who once wouldn't have considered voting for anyone but one of their own have grown accustomed to candidates from other faiths. There have been seven Catholics on national tickets since Kennedy, including Ryan and Vice President Joe Biden, as well as one Jew and a Greek Orthodox candidate. President Obama is Protestant.

"Romney as a Mormon is part of a group that used to be thought of as the outside, but they've become assimilated in ways not unlike Catholics," Hollinger says.

It's different with Obama. The president doesn't have to be black for millions of people to hate him — Bill Clinton and George W. Bush, both WASPs with WASP vice presidents, proved that.

But Obama's background — not just being the first African-American president, but having a Kenyan father and having spent part of his childhood abroad — makes him emblematic of changes that are altering the sense of what it means to be American.

In May, the Census Bureau reported that more minority children are being born in the U.S. now than whites.

"Some people say, 'Great,' others say, 'The country I've known is vanishing before my eyes,' " says Mark Smith, a political scientist at the University of Washington.

The anxiety that change always creates helps explain why there have been so many questions about whether Obama was actually born in America or might be a Muslim.

"He does seem kind of otherly, not just being black but having the international background," Smith says.

But in certain ways, Obama fits the standard profile of someone in power. There may not be as many WASPs holding positions of power, but there seem to be just as many Ivy League graduates running things as there ever were.

Obama got his law degree from Harvard — just like Romney.

"It did matter that Barack Obama was the product of Columbia and Harvard and did well at both institutions," says Charles, the Duke law professor. "That made him safe to a lot of people."

While none of the current Supreme Court justices are Protestants, every one of them holds at least one degree from Harvard or Yale. "We're all from the Ivy League," Justice Clarence Thomas said last week, when asked about the absence of Protestants on the court. "That seems to be more relevant than what faith we are."

Harvard students are no longer predominantly Protestant and no longer show up with their servants in tow — as many of them did as late as World War II. This fall, the freshman classes at both Harvard and Yale are made up of more than 40 percent nonwhite students.

"They find these guys like Obama who are clearly ready to go and take advantage of a place like Columbia or Harvard," says Hollinger, the Berkeley professor. "In earlier times, somebody like Obama couldn't get into Harvard and they wouldn't have had anything to do with him."