Accessibility links
Romney's '47 Percent' Comments Complicate Swing-State Fortunes : It's All Politics Republican Mitt Romney's characterization of 47 percent of Americans as people who believe they are victims may hurt him in the short run. His problem: There's not much more campaign left than a short run. Here's a look at how the controversy is playing in eight battleground states. 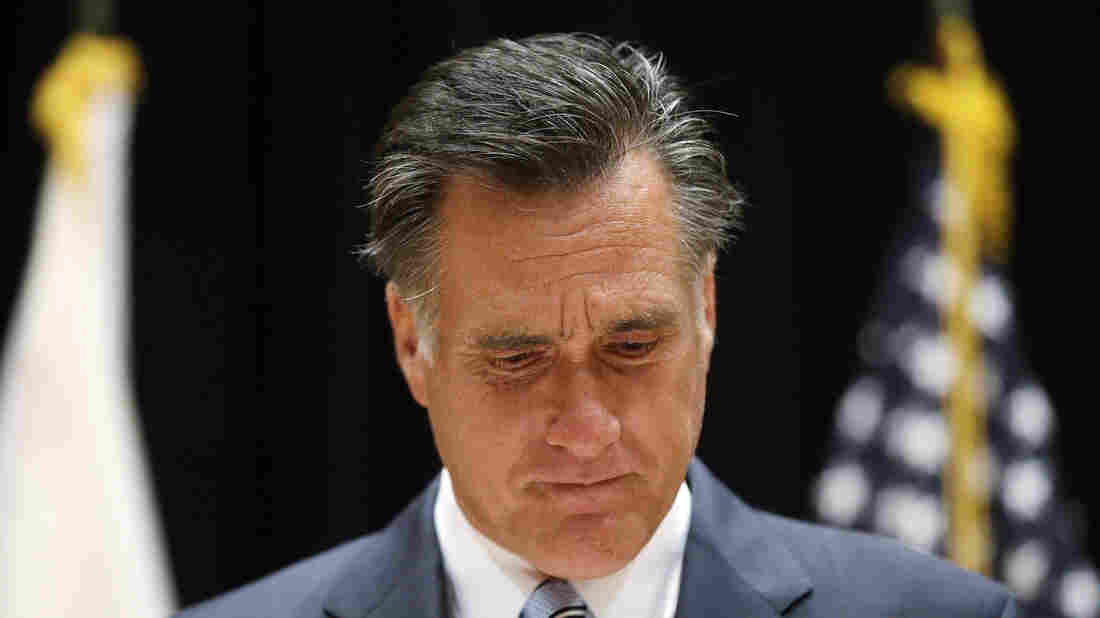 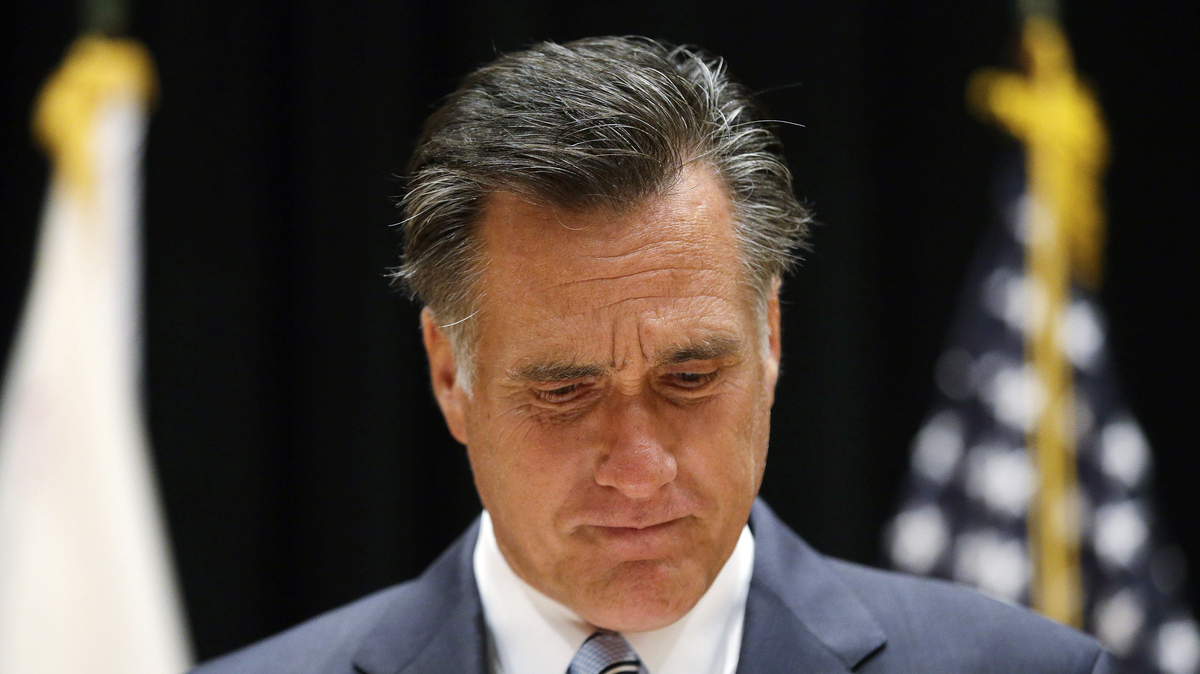 The question of whether Mitt Romney's presidential campaign will be hurt by his characterization of 47 percent of Americans as people who believe they are victims, entitled to health care, food, housing, "you name it," is fairly settled.

Yes, it will — at least in the short run. Romney's problem? There's not much more campaign left than a short run.

His comments, surreptitiously videotaped during a May fundraiser and disseminated online Monday by the liberal Mother Jones magazine, came after a series of gaffes by Romney and have the potential to hobble him further in eight tossup states where the race for the White House will be decided Nov. 6. President Obama holds small leads in all.

Particularly damaging, say politicos in states like Ohio and Iowa and Virginia, was Romney's distillation of how he viewed his obligation to those Americans.

On the video, Romney says that his role "is not to worry about those people. I'll never convince them that they should take personal responsibility and care for their lives." He also characterized 47 percent who will "vote for the president no matter what" as the swath of Americans who don't pay income tax.

"We Republicans, and independents who tend to vote Republican, are concerned about the government-centered nature of the Obama administration and his plans for the future," Gross said Tuesday. "But our beliefs are that we don't write off those who are dependent — we help them get the education and tools to succeed on their own."

"Writing them off is an anathema to us," he said.

In the hours after the video surfaced, tax policy centers have noted that while it's true that just under half of Americans owe no federal income taxes under the current tax code, many of them pay federal payroll and excise taxes, as well as state and local income, property and sales taxes. And many of them are elderly, poor, and some serve in the military.

To gauge how Romney's comments may play in tossup states, we turned to politicos, strategists and pollsters on both sides of the aisle. Here's what we heard:

Alan Melamed, Democratic strategist with offices in Cleveland and Columbus:

"Gov. Romney was already in some serious trouble. The latest polling shows him down 7 points. His failure to advocate for assisting the auto industry is having a serious impact on him in Ohio. There was a stark contrast in the two party conventions, and President Clinton's efforts have hurt him here.

"Then you go to these videos. It just reinforces everything that's hurt him up to this point. The comments don't surprise me. If you go back to the primaries, and saw Gov. Romney shift to the right, attempt to appease the Ron Paul and Tea Party elements. His words are coming back to haunt him in the middle of a general election presidential campaign.

"The people he had a shot at, I don't know how he brings them to his camp at this point."

"I think the worst part of it is the timing. There's nothing philosophically that was that surprising. And almost everything can be handled if they're handled early enough. His problem: We're two weeks from [early] voting in tossup states. We're close. He's clearly going to be on the defensive explaining this; it's polarizing. If you're talking to independent Colorado voters, you want to be more conciliatory; you want to say that there can be solutions, you can get things done. This is more of the very partisan antagonism that has characterized this race.

"We are in a major debate right now as to whether or not the campaign has cratered. This will simply reinforce the commentary. For Colorado, for opinion leaders, for those wondering whether to make a final donation, a final phone call — not just voters, but activists and the attentive public, are right at a critical point.

"This is just terrible, terrible timing for Romney."

"It's not a death blow. I think the key will be the first debate, a chance to see them side-by-side.

"Philosophically, clearly the majority of the public are not interested in more government handouts. They are concerned about income inequality. Not to ignore it, but solve it. This is a general election and not a primary.

"His problem is not the fact that he's decrying a significant and growing proportion of people dependent on government and not paying taxes. The problem is him writing them off. It feeds the narrative of the Obama campaign that he's out of touch.

"He still has a chance to win here, but this doesn't help."

"I don't know how this will play out. If you look at how Romney has fared in polling since January, he's had some work to do here.

"His issue has been answering the question about whether he cares about people — he has trouble there. And in simple favorable/unfavorable ratings, he's been underwater.

"In his favor, having [Wisconsin Rep. Paul] Ryan on the ticket does help, and he has a really solid get-out-the-voter operation.

"I'm not sure Nevada will be any different than any other place. He already has some problems here. There are no public polls showing him ahead. This is just going to make his job here that much tougher.

"I know some people think this is going to help energize the base, but I think it's a little late for that. The Democrats have a much, much better machine to get out the vote here.

"His only chance is an exceedingly high Republican turnout, and the 17 percent of voters who are independents breaking toward him. There's no sign of any of that now."

Larry Sabato, director of the University of Virginia's Center for Politics:

"It doesn't help him anywhere — how could it? The 47 percent he described as victims, and hopeless, include millions of Romney supporters. He draws disproportionately from white blue-collar workers, who are often not paying federal income taxes. Those lower-middle class and below can be exempt, as can senior citizens.

"Many years ago I learned an inflexible rule — you tend not to get the votes of people you insult.

"It's Sept. 18, and you push the reset button at the debates next month. But even War and Peace has only a certain number of pages to turn. We seem to be turning a number of pages on Gov. Romney — gaffes, staff infighting, the convention. Time and pages are running out."

The two other tossup states are New Hampshire and Florida. Their statistics look like this: