Accessibility links
Welfare Wasn't Always A Dirty Word In The Romney Family : It's All Politics Mitt Romney's mother, Lenore, once cited her husband's childhood on welfare as a reason Michigan voters should trust the car company executive to be their governor. It's worth taking a look at now that her presidential candidate son has gotten into trouble with his "47 percent" remark.

Welfare Wasn't Always A Dirty Word In The Romney Family

Welfare Wasn't Always A Dirty Word In The Romney Family 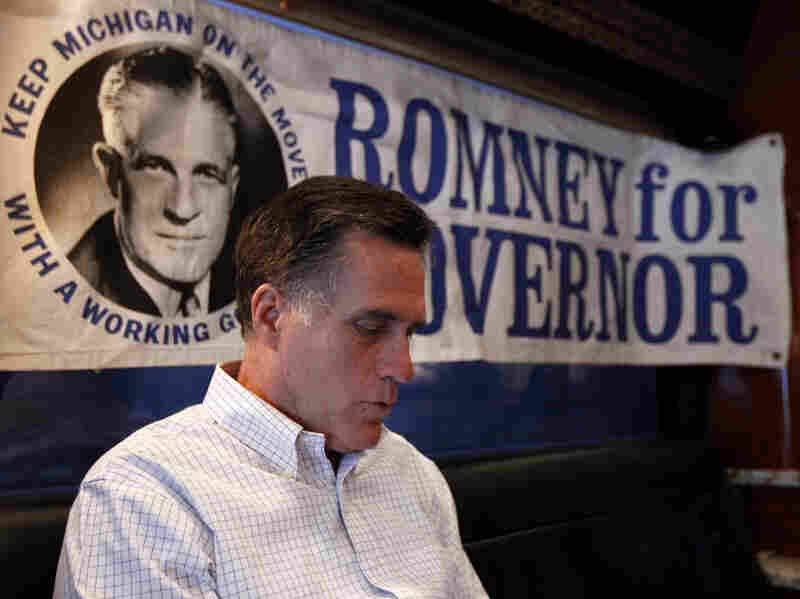 Mitt Romney reads on his campaign bus earlier this year. A 1960s campaign poster supporting his father, George, is behind him. Gerald Herbert/AP hide caption 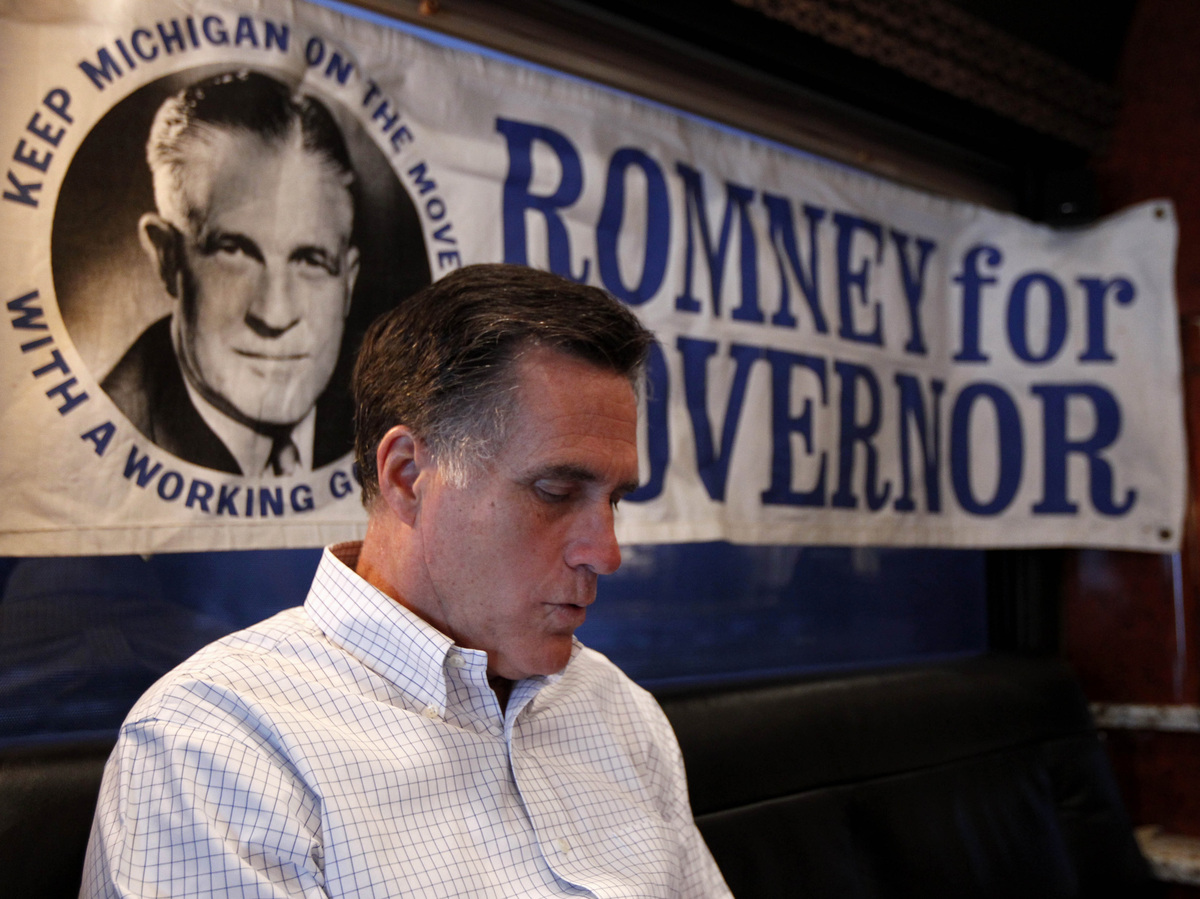 Mitt Romney reads on his campaign bus earlier this year. A 1960s campaign poster supporting his father, George, is behind him.

As Mitt Romney continues to deal with fallout from the secretly recorded "47 percent" fundraiser video that's gone viral, in which he dissed half the nation, more attention is being given to another recording featuring another Romney — his mother, Lenore.

President John F. Kennedy was in the White House in 1962 when the current Republican presidential nominee's mother sat down for an interview to speak on behalf of her husband, George, who was then making his first run to be Michigan's governor.

Buzzfeed's Andrew Kaczynski posted the video online on Sept. 7, well before the former Massachusetts governor's controversial comments about Obama supporters began to get widespread coverage. Buzzfeed describes the interview as an infomercial. Jon Stewart used a snip of the old footage of presidential candidate's mother on The Daily Show Tuesday. (It starts at about the 4:48 mark.)

George Romney, born into a family that saw its fortunes decline when he was a child because of political unrest in Mexico, where he was born, became relatively wealthy as an adult. He was chief executive of American Motors Co.

This led the 1962 interviewer to ask Mrs. Romney how her husband could relate to common people — given the high station he had achieved.

INTERVIEWER: "There are those who say that since he's a man of considerable means he really doesn't care about people."

What's ironic, of course, is that the same question has been asked about her son ever since his first political campaign in 1994, when he ran for U.S. Senate.

Back to her interview.

LENORE ROMNEY: "You know we've only owned our home for the last four years. He was a refugee from Mexico. He was on relief, welfare relief for the first years of his life. But this great country gave him opportunities.

"The family was poor. He said they lived for a year on nothing but potatoes. He's known what it is to have to work for every dime he's had since he was 12."

The fact that the Republican presidential nominee's mother mentioned her husband's childhood on public assistance as part of her pitch to voters shows, if nothing else, how far the nation has moved on the welfare issue since the 1960s. George Romney won the 1962 gubernatorial election, the first of three he would win.

The story of how young George came to be on welfare is fascinating in its own right and is told in the biography "The Real Romney" by journalists Michael Kranish and Scott Helman.

The presidential nominee's great-grandfather Miles was asked in the late 1880s by Mormon officials to go to Mexico to create a colony where Mormons could practice polygamy far from the harassment of U.S. officials. It was there that Mitt Romney's grandfather Gaskell and father, George, were born into an increasingly prosperous family and Mormon community.

But in 1912, George, then 5, and his family fled, with thousands of other Mormons, to the U.S. — chased out by Mexican rebels and largely leaving their wealth behind.

"Fortunately for the Romneys, the U.S. government, which had once chased Miles to Mexico due to his polygamy, now welcomed the Romneys and other Mormons to the United States. Congress established a $100,000 relief fund that enabled the Romneys and other Mormon exiles to receive food and lodging. Initially, the [Romneys'] stay on U.S. soil was to be temporary. The El Paso Herald reported on October 25, 1912, that Gaskell Romney and his family, including little George, had gone to Los Angeles 'until it is safe for his family to return to the colonies in Mexico.' But Gaskell's family would never return to live there and made only a sentimental trip years later. Had they returned for good, Mitt Romney may never have been in a position to run for president."

Instead, he was in a position to run for president. That's how he came to be in that Boca Raton house at that May fundraiser where he made the "47 percent" comment and others that he's now trying to put behind him.