Accessibility links
The Voter Veto: On Controversial Issues, More Citizens Taking On Lawmakers : It's All Politics In November, voters will decide whether new state laws on issues such as labor policy, immigration and gay marriage can remain in effect. They're using a process called "popular referendum." Different from a ballot initiative, it amounts to a public veto of elected officials. And its use is growing. 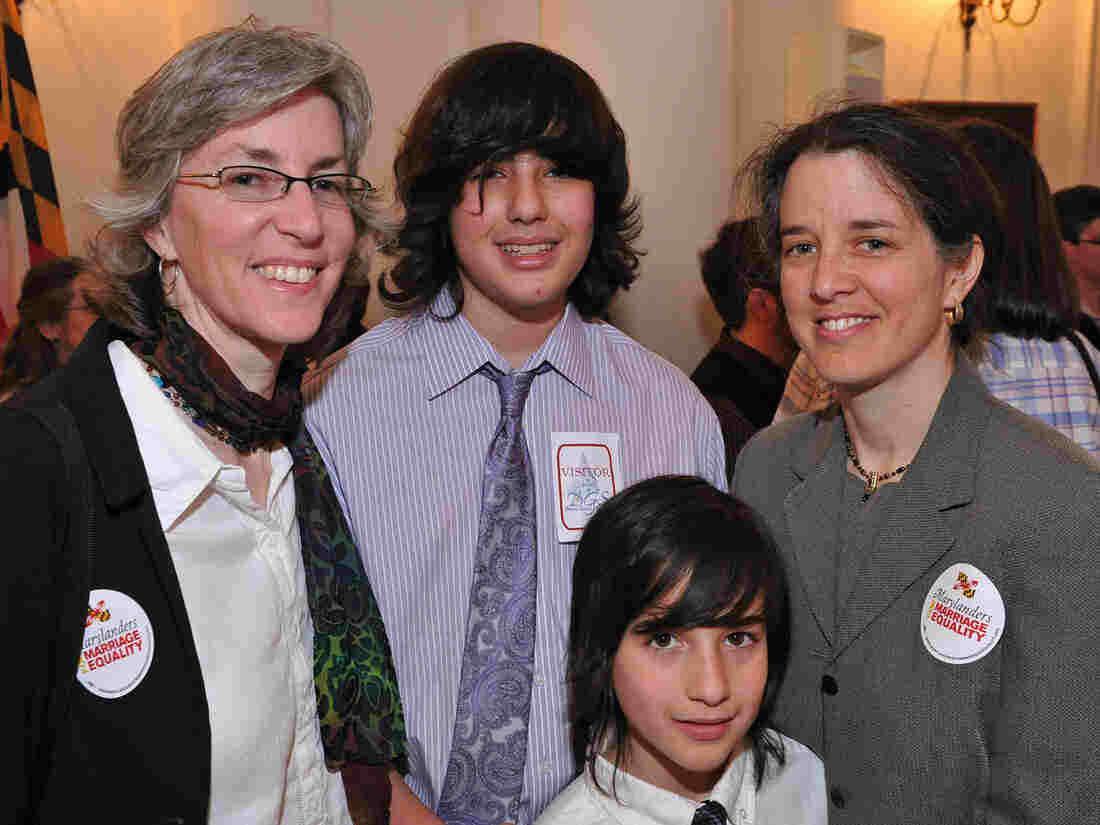 In March, Stacey Kargman-Kaye (left) and her partner, Sharon Gorenstein, with sons Asher, 13, and Ezra, 8, gathered at the Maryland Statehouse in Annapolis to witness the signing of a law recognizing same-sex marriage. On Nov. 6, Maryland voters will decide whether to overturn the new law. Amy Davis/MCT /Landov hide caption 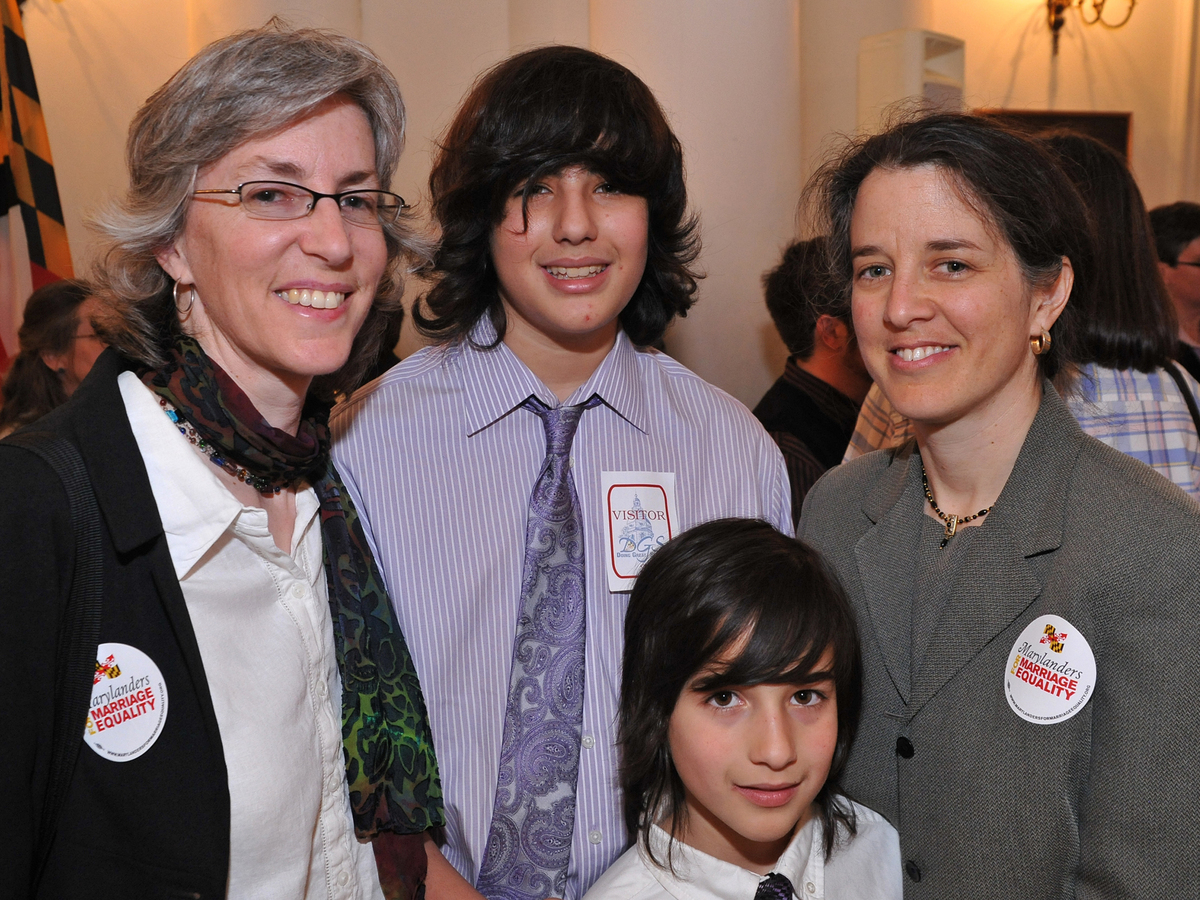 In March, Stacey Kargman-Kaye (left) and her partner, Sharon Gorenstein, with sons Asher, 13, and Ezra, 8, gathered at the Maryland Statehouse in Annapolis to witness the signing of a law recognizing same-sex marriage. On Nov. 6, Maryland voters will decide whether to overturn the new law.

If you didn't get your fill of the debate about the best ways to evaluate and compensate teachers from the strike in Chicago, you can now tune in to hear similar arguments in Idaho.

Voters there are going to decide the fate of three different state laws that would phase out tenure, offer financial incentives to top-performing teachers and strip teachers of collective bargaining rights.

All of these laws are being challenged by what are known as popular referendums: when citizens challenge laws that have already been passed by the legislature and signed by the governor.

About half of the states allow popular referendums.

They are distinct from ballot initiatives, which are shepherded from start to finish by citizens or interest groups outside the legislature. These amount to vetoes by the public.

This year, there are popular referendums touching on labor issues, redistricting, immigration and gay marriage.

"It was clear where the public was on these issues, and yet the Legislature still disregarded the public will and moved ahead with it," says Idaho state Rep. Brian Cronin, a Democrat who is working to repeal his colleagues' handiwork on education policy.

All told, there are 12 citizens' vetoes on ballots nationwide this November. That doesn't sound like a lot, but it's the most seen in any year since 1920 and double the number in either 2008 or 2010.

It's not clear why this tool has been rarely used until now, but it's a clear expression of voter anger (even though not all veto measures pass).

"The increase in the use of both the recall and popular referenda are symptomatic of the political polarization that we're seeing both in American government and the electorate," says Jennie Bowser, who tracks ballot measures for the National Conference of State Legislatures. "The popular referendum is the tug back in that game of tug of war."

In certain states, voters are used to making and unmaking public policy at the ballot. That makes it difficult for legislators to craft laws, particularly on the most contentious issues, says Howard Cody, a political scientist at the University of Maine. It's hard enough summoning the political will to raise taxes, for instance, if you know the voters might just overturn such laws.

"It tends to cow the legislators and also the governor," Cody says. "They're always walking on eggshells. When they're working out a deal, they have to wonder if someone is going to object to this and set up a referendum and try to overturn it."

That happened last November in Ohio, where a measure to block collective bargaining for public employees was rejected by voters. Repealing a Michigan law that gives "emergency managers" the power to rewrite contracts for local government workers "is one of labor's national priorities," says Josh Goodman, a reporter at Stateline, an online news service sponsored by the Pew Center on the States.

Still, although the use of popular referendums is increasing, it's still rare, with just the 12 examples this year in the face of thousands of new laws. "It's not like we're talking about this huge revolution of the masses against the legislatures," says Gary Moncrief, a political scientist at Boise State University.

Moncrief suggests that citizens vetoes happen when a state is dominated by one party. Unchecked, big legislative majorities can pass bills that go beyond what the average voter may want, whether it's conservative legislation in Republican Idaho or liberal laws in solidly Democratic Maryland.

"The reasons there are so many questions on the ballot, in my opinion, is this General Assembly is out of touch with the voters of this state," says Rep. Pat McDonough, one of just 43 Republicans in the 141-member Maryland House. "They're passing radical policy positions that are out of touch with the people of Maryland."

McDonough is supporting a popular referendum that would overturn the Legislature's decision to grant in-state tuition rates to illegal immigrants who were brought to the state as children.

Marylanders may also block a new law granting same-sex marriage rights, as might voters in Washington state. In Maine, voters used a popular referendum to block a gay marriage law in 2009, but polls indicate a ballot initiative to allow gay marriage might pass this November.

Voters nationwide have consistently approved ballot measures to ban gay marriage. Some observers think things will be different this year.

But in the few states where the legislature has granted marriage rights, it's not wholly surprising that there would be attempts to give voters the chance to repeal them.

"We only have to do this because the career politicians in Olympia passed a bill that would redefine marriage," says Chip White, communications director for Preserve Marriage Washington, which is leading the citizens' veto effort in that state. "Thanks to the signatures of nearly 250,000 Washingtonians, the referendum is on the ballot."