Accessibility links
Todd Akin Bets He Still Has A Chance : It's All Politics The Republican nominee for Senate in Missouri will never stop being asked questions about "legitimate rape." Still, the state is conservative enough to have kept him close with six weeks to go. And now he's been joined on the campaign trail by former House Speaker Newt Gingrich.

Todd Akin Bets He Still Has A Chance

Todd Akin Bets He Still Has A Chance 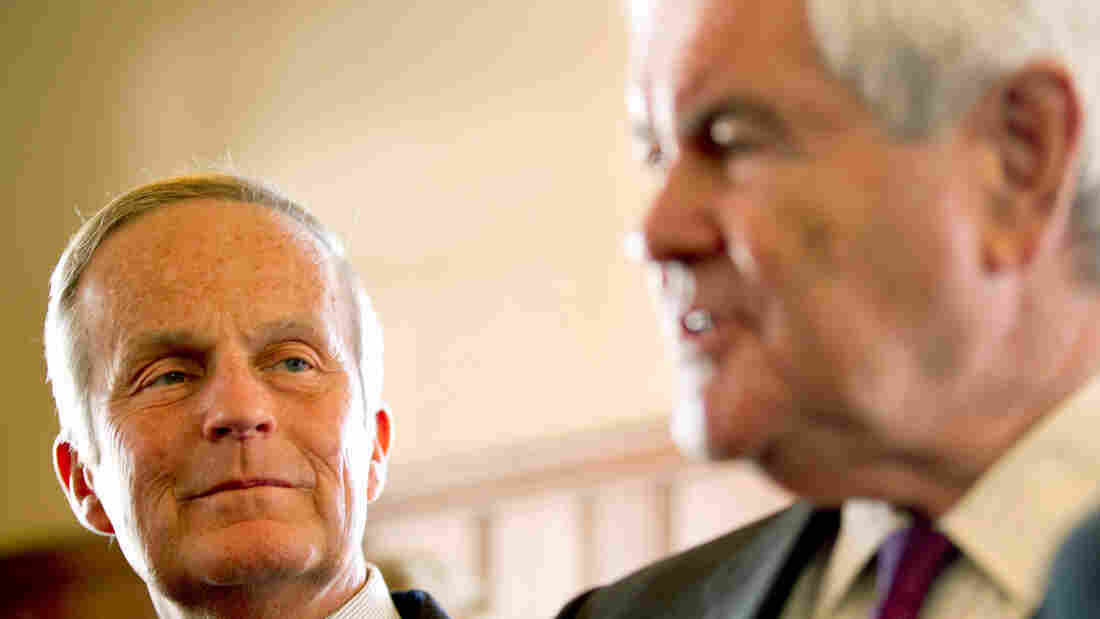 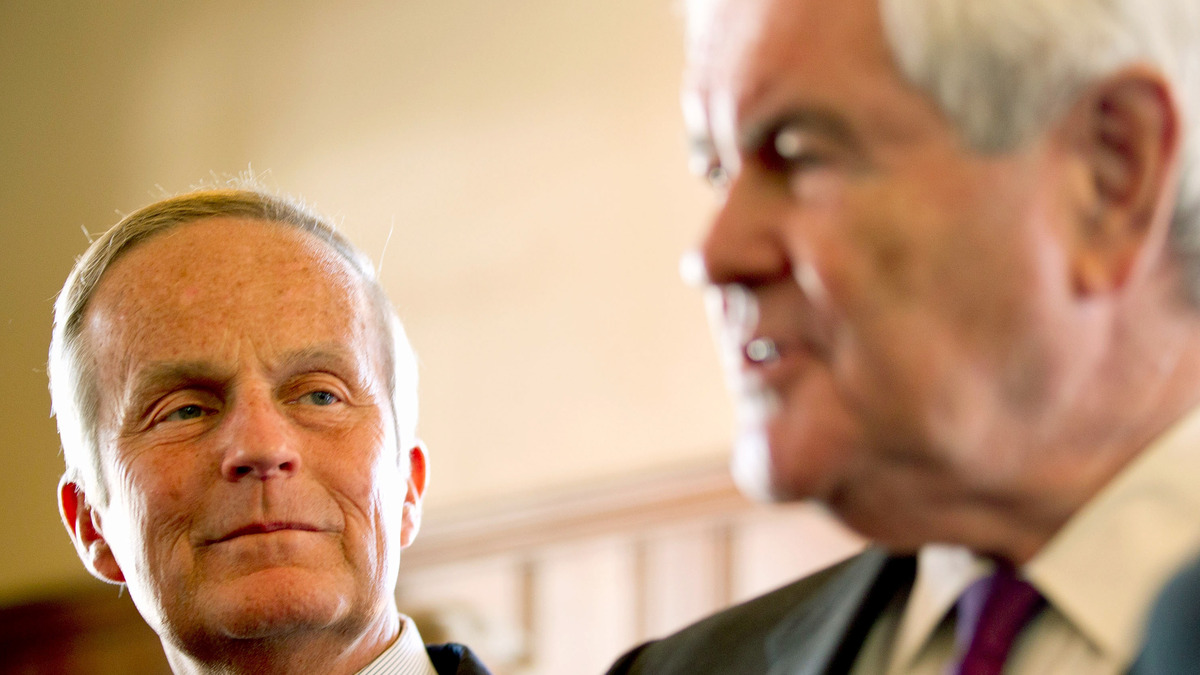 Say what you want about Rep. Todd Akin, he's no quitter.

Tuesday is the last day Akin can remove his name from the Missouri ballot as the Republican nominee for Senate. As the deadline approached, he made it clear he has no intention of dropping out.

"For about the hundredth time or so, I am in this race," Akin said at a news conference Monday at the Amtrak station in Kirkwood, a suburb of St. Louis. "The people of Missouri chose me to do a job."

Republicans from presidential nominee Mitt Romney on down have called for Akin to stand down, believing that his infamous comments about "legitimate rape" have disqualified him as a candidate.

"We're not going to play in Missouri with Todd Akin, I can tell you that," Reince Priebus, who chairs the Republican National Committee, said Sunday on ABC's This Week.

But Newt Gingrich, the former House speaker and erstwhile Romney rival, said Monday it was a mistake for Republicans to abandon Akin.

"This is a winnable race," Gingrich said at the Kirkwood event. "Republicans nationally have to decide if they want to keep [Nevada Democrat] Harry Reid as majority leader in the Senate or work to elect Todd Akin." 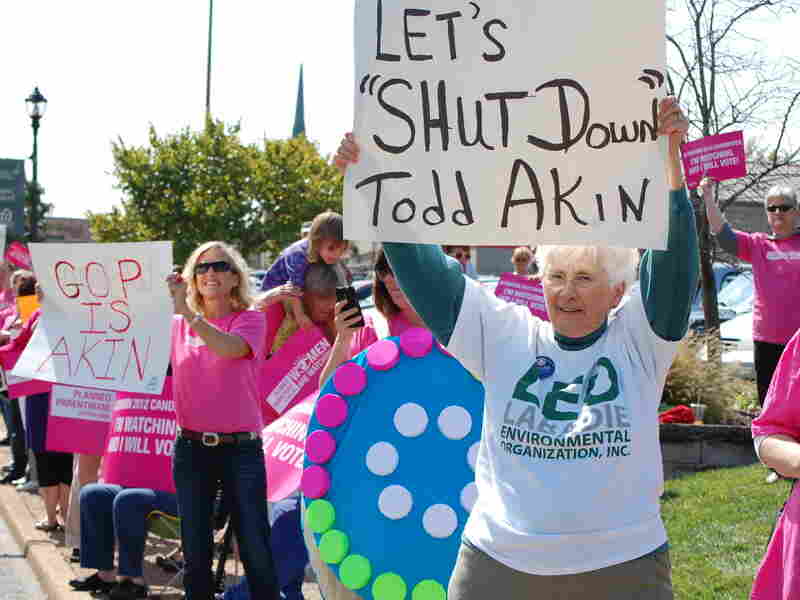 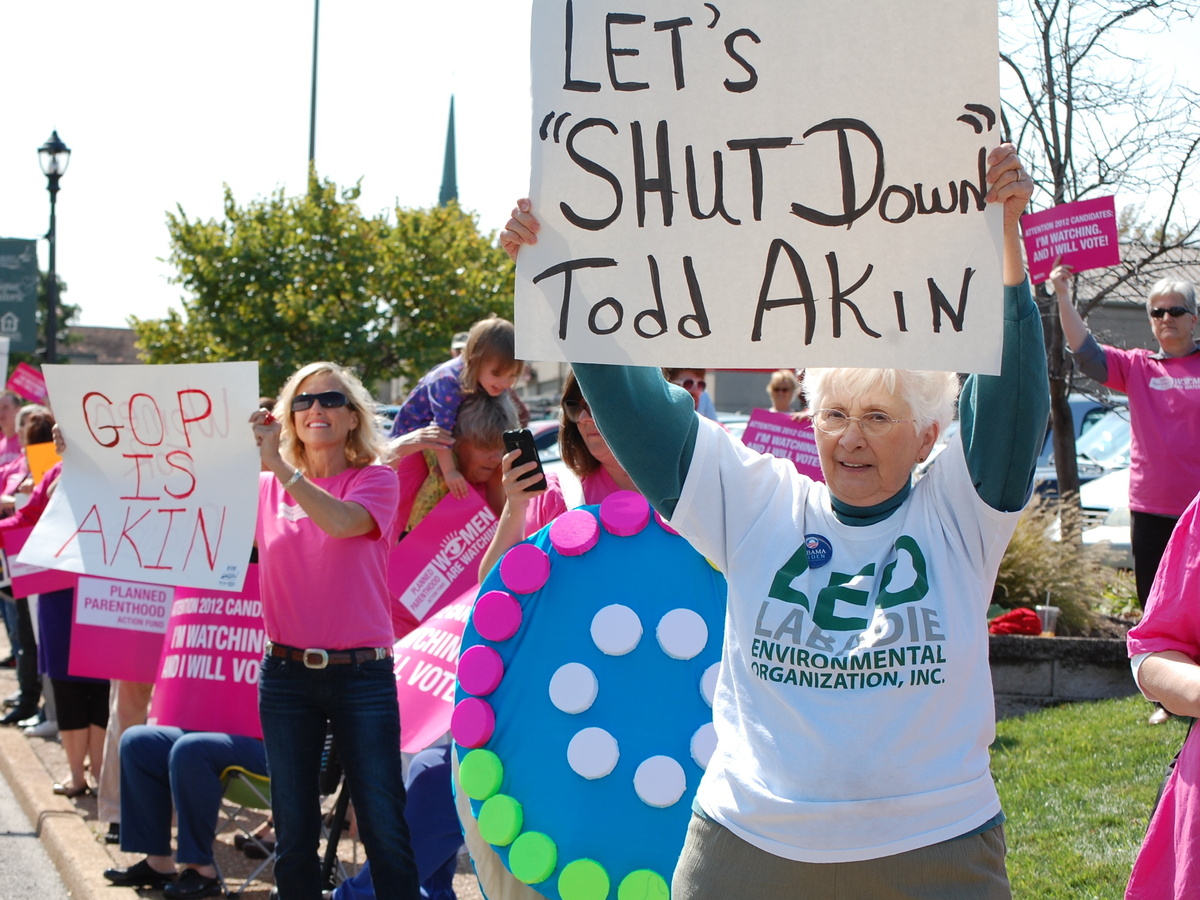 Planned Parenthood organized a protest outside a fundraiser for Todd Akin on Monday.

Polls continue to show a tight race. Missouri is home to a disproportionately high percentage of evangelical Christians, and typically gives favorability ratings to President Obama that run about 15 percentage points below the national average, said Terry Jones, who chairs the political science department at the University of Missouri, St. Louis.

"That provides a very attractive base for Republican candidates who are socially conservative," Jones said. "If they can devise a good ground game, that gives them a good place to start."

Perhaps the main problem for Akin will be the difficulty he'll have matching any kind of a ground game with air support — that is, television commercials. Several stations in the state have pulled Akin's advertising in recent weeks for failure to pay bills.

A candidate running TV ads statewide needs to spend about $500,000 per week, Jones said. Akin is not raising money at anywhere near that clip at this point.

Gingrich, who appeared with Akin at a fundraiser following their joint news conference, said that should turn around. If polls continue to show the race as winnable, there will be no "moral case" for big-money Republicans to sit on the sidelines and squander the chance to take control of the Senate, he said.

Gingrich compared Akin's situation to Harry Truman's Senate race from Missouri in 1940, when party "machine" leaders sought (but failed) to push him out for fear he couldn't win (he did). Indeed, Akin has made complaints about "Washington insiders" who are trying to control the race part of the mantra of his campaign.

Rather than dropping out, Akin is spending Tuesday kicking off a statewide bus tour, during which he'll be accompanied by prominent social conservatives such as Phyllis Schlafly, the longtime president of the Eagle Forum.

Akin supporters who attended the event at the train station said they believe he has a good chance. They criticized McCaskill as being too liberal for the state, noting in particular the struggling economy and her vote for President Obama's health care law.

"I'm glad he's hanging in there," says Karen Vick, a hairdresser from nearby Crestwood. "Sometimes you say something you wish you didn't, but he's apologized more than once, and I don't think you get thrown under the bus for saying something you regret."