Accessibility links
2012 Gender Gap Could Be Historic, But Maybe Not For The Reason You'd Think : It's All Politics New polls suggest the percentage of women voting for President Obama over Republican Mitt Romney could reach historic levels. The surprise? The divide is attributed primarily to this year's size-of-government debate, not to a focus on social issues like abortion and reproductive rights.

2012 Gender Gap Could Be Historic, But Maybe Not For The Reason You'd Think

2012 Gender Gap Could Be Historic, But Maybe Not For The Reason You'd Think 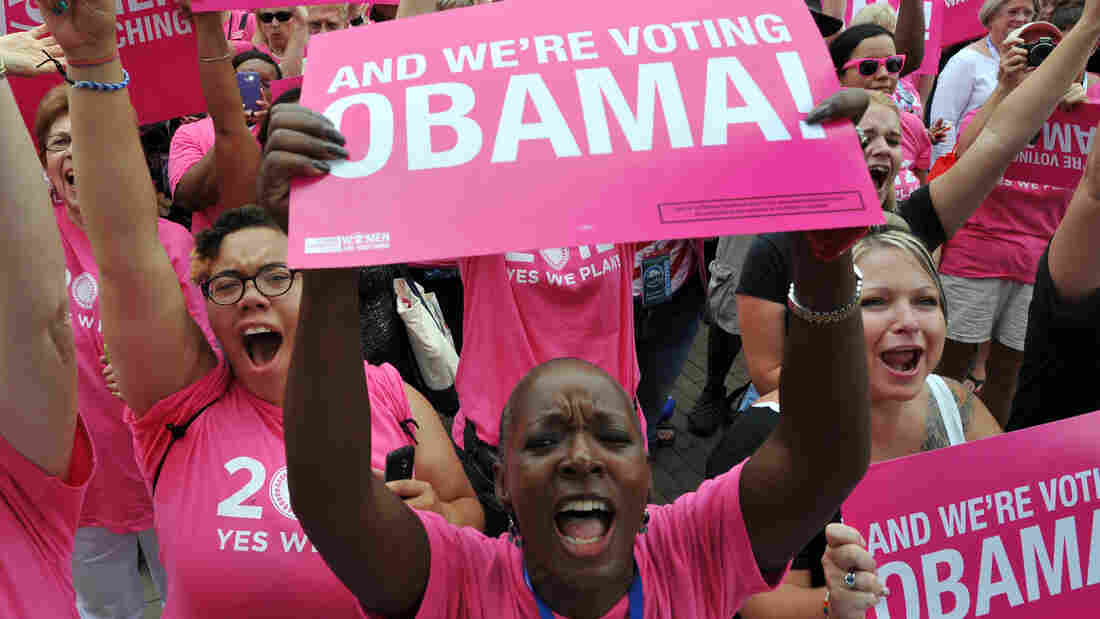 Supporters of Planned Parenthood wave banners during a rally for President Obama in Charlotte, N.C., on Sept. 4, ahead of the opening of the Democratic National Convention. Mladen Antonov/AFP/Getty Images hide caption 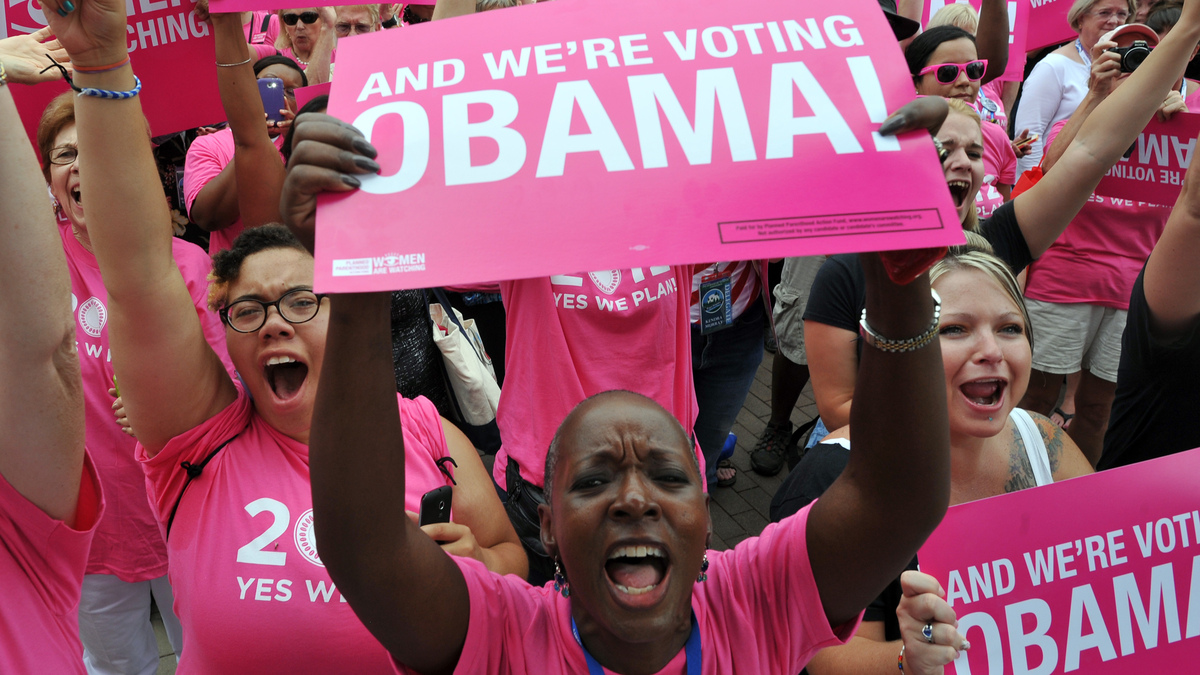 Supporters of Planned Parenthood wave banners during a rally for President Obama in Charlotte, N.C., on Sept. 4, ahead of the opening of the Democratic National Convention.

A slew of new presidential polls released this week not only confirm a long-established gender gap among voters, but also suggest that the male-female preference divide in this year's presidential contest could hit historic levels.

It may surprise that that divide appears not driven by social issues and arguments over reproductive care or choices, analysts say, but largely by the national conversation over the size of government.

"On the fundamental question of whether you want a smaller government with fewer services, or a bigger government with more services, women and men are in a very different place," says Carroll Doherty of the Pew Research Center, adding that women are far more supportive of the bigger/more equation.

"And that," he says, "is the fundamental question of this election."

How women — and men — come down on that question is more fundamentally tied to, or "correlated with," how they'll vote Nov. 6 than any issue Pew has found in more than three decades of polling, Doherty says.

"Social issues matter in the gender gap, but the real big dividing lines are what government should be doing for the poor, the elderly and the size of safety net," Doherty says.

That suggests that Romney's comments in a secretly recorded fundraiser — when he characterized "47 percent" of Americans as perceiving themselves as victims entitled to government support — have the potential to resonate widely in the presidential race.

And that Romney's failure to gain traction against Obama in national polls will ultimately have more to do with the size-of-government argument than any specific position the GOP has taken on the "women's issues" of abortion or birth control.

A Look At The Numbers

Nationally, women likely to vote said they preferred Obama over Romney by a nearly 20-point margin, according to a Pew Research Center poll taken earlier this month and before the "47 percent" comments.

Social issues matter in the gender gap, but the real big dividing lines are what government should be doing for the poor, the elderly and the size of safety net.

Swing state poll results released this week suggest similar margins in Florida and Pennsylvania. An even wider margin was found by a Quinnipiac/CBS News/New York Times survey in Ohio, where 60 percent of likely female voters said they prefer Obama, and 35 percent picked Romney as their candidate.

It's worth noting that female voters, as a group, haven't always preferred the Democratic candidate for president.

But you'd have to reach back to 1980 and 1984 to find elections when a majority of women voted for the Republican candidate, choosing Ronald Reagan over Democratic candidates Jimmy Carter and Walter Mondale.

Still, even in those years, more women than men marked their ballots for the Democrats. And the gender gap, while varying in its size, has remained a constant.

In 2004, President George W. Bush, in his successful re-election run, enjoyed a big lead among men and only lost women overall by 3 percentage points.

And while Romney has consistently been favored by white married men, who drive his large lead over Obama with married men, he has been losing his edge with unmarried men.

After the Democrats were crushed in the 2010 midterm elections, when the GOP recaptured the U.S. House, Republicans were looking to capitalize on their success with women.

Exit polls suggested that GOP candidates attracted about 12 percent of women who voted for Obama in 2008, and female voters were almost equally split between Republican and Democratic candidates.

The Romney campaign has taken a few stabs at improving its standing with women. It has dispatched Romney's wife, Ann Romney, with direct appeals to women, most notably at the Republican National Convention when she declared "I love you women!" during her prime-time speech.

After the videotaped "47 percent" comments were disseminated online by the liberal magazine Mother Jones, the Romney campaign released an ad targeting young mothers and the national debt.

Running in swing states like Virginia, the "Dear Daughter" ad shows a young mother cradling a baby and noting that "your share of Obama's debt is over $50,000. And it grows every day." It notes the rate of women in poverty and the difficulty women have finding work.

Earlier this week, conservative bloggers criticized Obama spokeswoman Stephanie Cutter for comments she made during an interview on NPR member station WAMU, during which she suggested that women are more interested in "what's going to happen in the next four years" than in what happened over the past four years.

The conservative website Redstate.com posted this after Cutter's comments:

"For reasons that are unclear to me, the Romney campaign has essentially ceded the field in the fight for women who vote based on their sex organs rather than issues. I don't know how big that demographic is, but after one brief attempt with the job loss data for women under Obama nothing has been heard. In the meantime the Obama campaign is hammering home that Romney will defund Planned Parenthood and that will mean Armageddon for women's health because the only health care women ever need is an abortion."

More than 60 percent of Obama campaign volunteers are women, Cutter said on WAMU, including a "Women for Obama" group that she asserted was "300,000 strong."

They are a "very powerful tool for us," she said, reaching women at home, at work, "conversation to conversation."

Though pollsters say the election isn't being driven by the issue of abortion, the nation's largest pro-abortion rights organization has launched its own effort to target women. NARAL Pro Choice America says it has identified through surveys female, pro-abortion rights "Obama defectors" — those who voted for Obama in 2008 but don't plan to this year.

Most of the "defectors," Shipp says, are women who identify themselves as independents and between the ages of 18 and 39.

Their theory is that in a close election, in swing counties, a half a percentage point could make a difference.

"I think elections can turn on a dime," Shipp says. "Our polls show that President Obama is winning women, but not by the margin he won in 2008."

That's not really what other national and state polls show.

Nevertheless, in an electorate composed of a majority of women, and increasing percentages of single, nonwhite women, the gender gap appears destined to widen — perhaps enough by November, if the tide doesn't turn soon for Romney, to make history.