Accessibility links
OMG! A Deb8! What Young People Really Want To Ask Obama And Romney : It's All Politics With young people among the hardest hit by the down economy, NPR wondered what millennials want from tonight's debate. The head of a group of college Republicans poses theoretical questions for President Obama. The president of a chapter of college Democrats fashions questions for Mitt Romney.

OMG! A Deb8! What Young People Really Want To Ask Obama And Romney

OMG! A Deb8! What Young People Really Want To Ask Obama And Romney 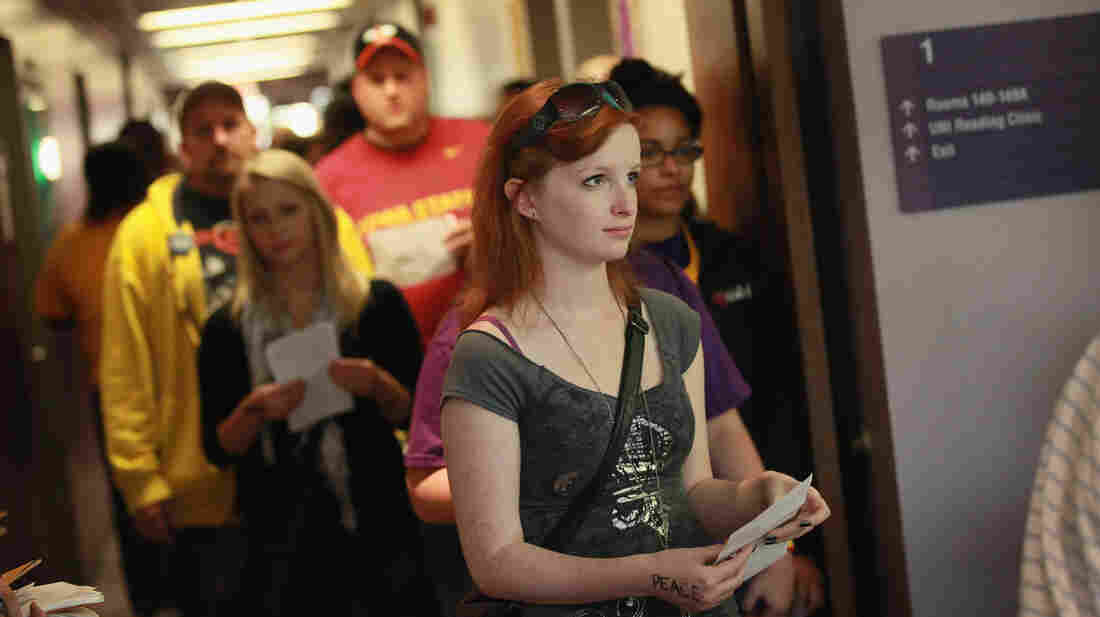 Students wait in line to vote last Friday on the campus of the University of Northern Iowa in Cedar Falls, a day after the swing state began in-person early voting. Scott Olson/Getty Images hide caption 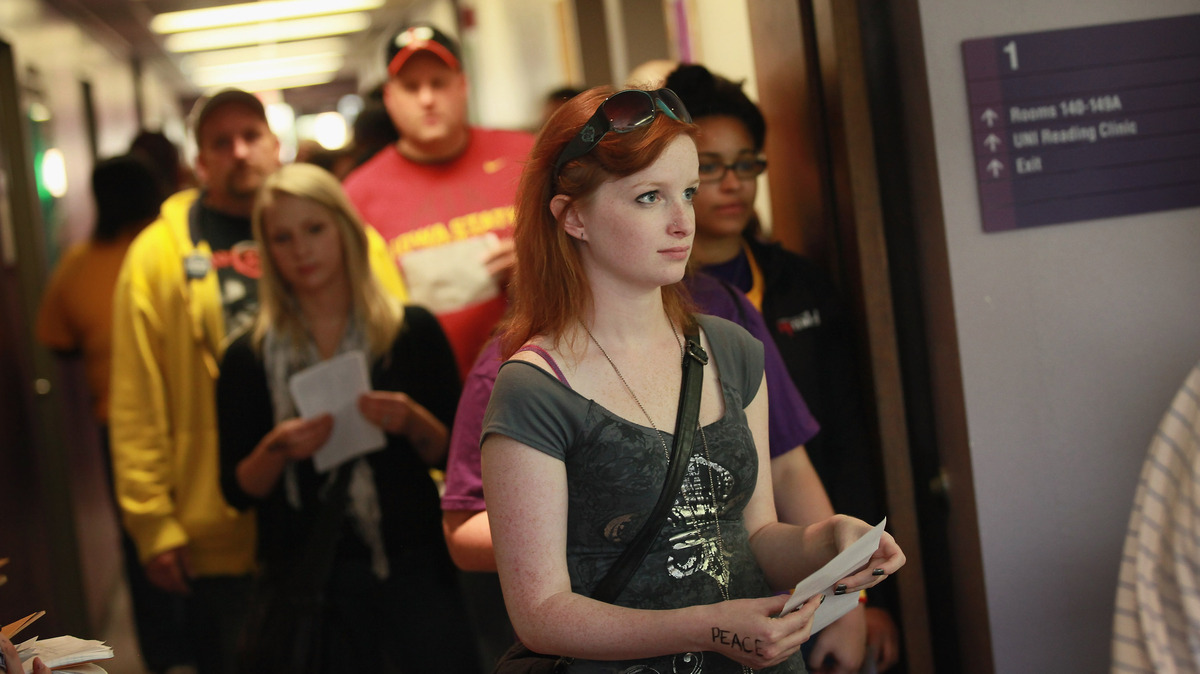 Students wait in line to vote last Friday on the campus of the University of Northern Iowa in Cedar Falls, a day after the swing state began in-person early voting.

Generation Y is asking why.

Why is it so hard to find a job? Why is health care so expensive? Smart questions from a smart generation. Their inquiries — and the presidential candidate they think can provide the best answers — could be a decisive factor in the 2012 election. If not the Tipping Point, as least a Tilting Point.

For many millennials, economic prospects are murky.

Paul T. Conway, president of Generation Opportunity, a nonpartisan think tank focusing on the economics of young Americans, says his polling shows that those between the ages of 18 and 29 have a 12.7 percent unemployment rate — much higher than the national average. That, coupled with the 1.7 million young people who have given up looking for work, yields "the highest sustained unemployment levels since World War II," says Conway.

Of the presidential debates that begin Wednesday, Conway says young voters "will look to both candidates to have the courage to be frank, to express genuine empathy of what they are going through as people in a tough economy, and to respect their intelligence as informed voters."

New Generation Opportunity polling data released today reveal that only 29 percent of millennials believe that the economic policies crafted in Washington are actually helping them, while 47 percent say they are hurting them.

Other findings: Only 38 percent believe that contemporary politicians reflect the interests of young Americans. Half of those surveyed said a candidate's position on issues and his record in office are more important than other factors in choosing a president; only 11 percent said a candidate's charisma and likability will be more important. And 59 percent of millennials say they plan to learn more about the policy positions of the presidential candidates in 2012 than they did in 2008.

Previous polling by the Virginia-based firm has also shown that more than 60 percent of young people feel that full-time jobs and affordable health care are more important issues than student loan rates. Some 76 percent say they plan to vote in the presidential election. And, Conway says, while Obama received 66 percent of the young adult vote in 2008, this time around polling results from JZ Analytics (Aug. 14) show that only 49 percent of young adults plan to vote for Obama.

When Obama and Mitt Romney face off against one another in three debates this month, they will be asked questions by seasoned moderators — Jim Lehrer, Candy Crowley and Bob Schieffer — all of whom are over 60.

So NPR thought it might be a good idea to ask a couple of young people what questions they would ask of the candidates, if given the opportunity.

Chairwoman of the Georgetown University College Republicans, Maggie Cleary, 21, is from Springfield, Va., and majoring in American studies and philosophy. She would ask President Obama:

The president of the College Democrats of Ohio, Daniel Rajaiah, 21, from Cincinnati, is a political science major at the University of Dayton. He would ask Mitt Romney:

"Unlike previous debates," Conway says, "this series of debates will be watched, shared, commented on and vigorously discussed among young Americans for weeks to come both on social media as well as in person. What all Americans should understand is that young adults know full well what is at stake in the 2012 election both for themselves and their country. "