Accessibility links
Voter Registration Deadlines Begin Passing This Week : It's All Politics If you want to vote in the November elections and you aren't registered yet — you'd better hurry. The registration deadline in five states is this weekend. By the following weekend, the deadline will have passed in more than half the states. 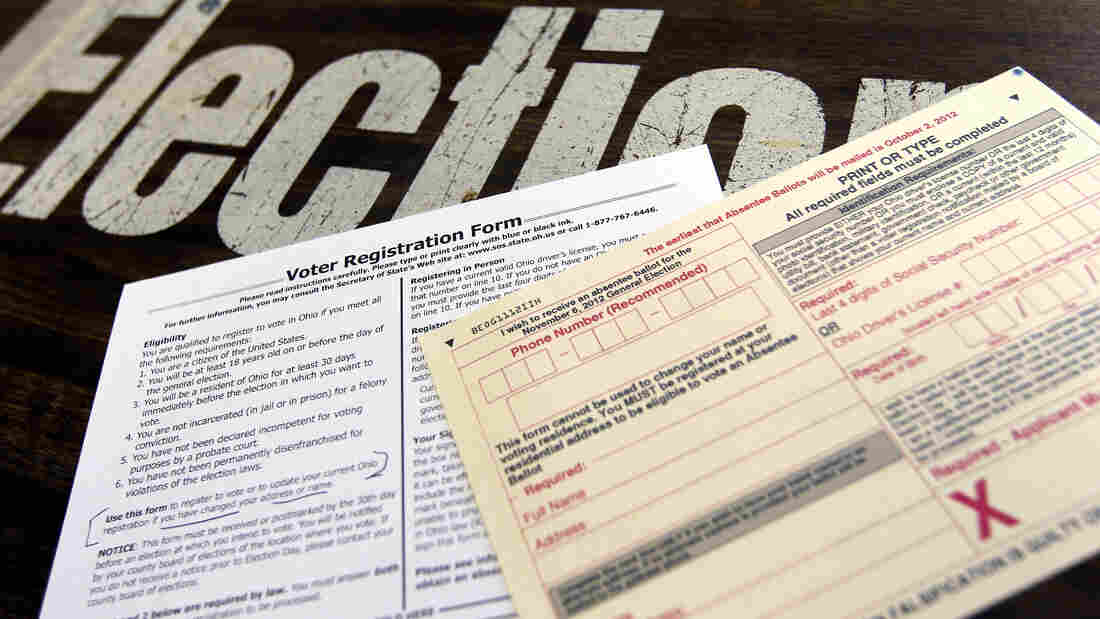 A voter registration form and absentee ballot application at a Franklin County polling place in Columbus, Ohio, on Tuesday. The deadline to register to vote in Ohio is Oct. 9. Matt Sullivan/Reuters/Landov hide caption 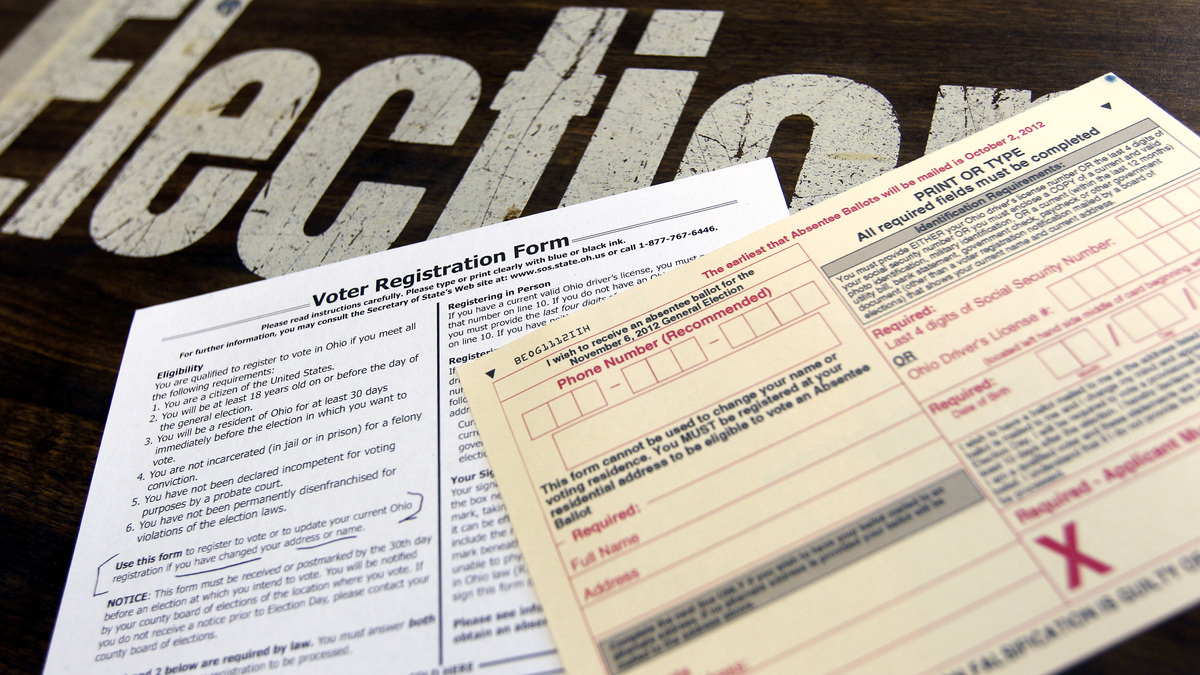 A voter registration form and absentee ballot application at a Franklin County polling place in Columbus, Ohio, on Tuesday. The deadline to register to vote in Ohio is Oct. 9.

If you want to vote in the November elections and you aren't registered yet — you'd better hurry. The registration deadline in five states is this weekend. By the following weekend, the deadline will have passed in more than half the states.

By some estimates, about a quarter of all eligible voters in the United States are not registered. That's tens of millions of people, a big target for groups, such as Rock the Vote, that are trying to sign up as many new voters as possible.

Rock the Vote says it has already registered some 650,000 young voters nationwide this year. President Heather Smith is encouraged by that, but she says she doubts they'll hit the 2 million-plus total they saw in 2008.

Smith admits in 2008 there was more excitement, with competitive primaries in both parties, and the history-making potential of electing the nation's first black president. This year, groups such as hers have also had to contend with new restrictions on voter registration drives in states such as Florida.

"We're behind in Florida, but we're doing everything we can to catch up," she says.

That seems to be the trend across the country. Registrations aren't up to 2008 levels, but they are starting to spike, as they always do before a big election.

And this year, there are new efforts to boost the numbers even more. Several states are participating in a new voter-registration program with the Pew Center on the States. They've used motor vehicle department records to identify about 5 million eligible but unregistered voters in their states and are actively pursuing them.

Colorado has launched an $850,000 ad campaign to encourage its residents to register.

And Nevada Secretary of State Ross Miller says his office recently sent cards to about 400,000 unregistered voters in his state, encouraging them to sign up.

"Immediately after those mailings went out, we saw an even higher spike in the usage of online voter registration," he says.

And that's another innovation. Thirteen states — including Nevada, California and New York — now allow voters to register directly online. Rock the Vote has a smartphone app that makes it very easy.

Miller says online registrations are a big improvement over getting piles of paper registration forms.

"We get that information without the issue of having to try to read somebody's illegible handwriting," he says, adding, "it saves a lot of money for the clerks and the registrars throughout the state who don't have to pay somebody to input that information into a computer."

Online registrations also bypass third-party registration groups that might lose or falsify a form. That's the accusation against Strategic Allied Consulting, a company hired this year by the Republican National Committee to sign up voters in five key states. The company was subsequently fired and is under investigation.

Both parties are actively recruiting voters, but — as they often do — Democrats seem to have the edge in new registrations. Catalist, a company that compiles data for progressive groups, says in August, Democrats were approaching a 2-to-1 advantage over Republicans in states that register by party. But independents take the lead overall.

David Becker, director of election initiatives for Pew, says there's another thing for parties to consider: Almost a third of voters have moved since 2008, and they need to update their registrations.

"That of course is crucial information," says Becker. "[Election officials] don't want to be mailing out sample ballots and other information to the wrong address. It's very important to try to get that information as soon as possible."

Although in eight states — New Hampshire, Maine, Iowa, Wisconsin, Minnesota, Wyoming, Montana and Idaho — people can relax a little. They're allowed to register, and vote, on Election Day.