Accessibility links
Democrats Sense An Opening In Indiana : It's All Politics U.S. Senate candidate Joe Donnelly holds a slim polling lead over Republican Richard Mourdock in a state no one expected to go Democratic this year. The question is whether GOP voters who have been reluctant to support Mourdock — who knocked out six-term Sen. Richard Lugar in the primary — will come home in the end

Democrats Sense An Opening In Indiana

Democrats Sense An Opening In Indiana 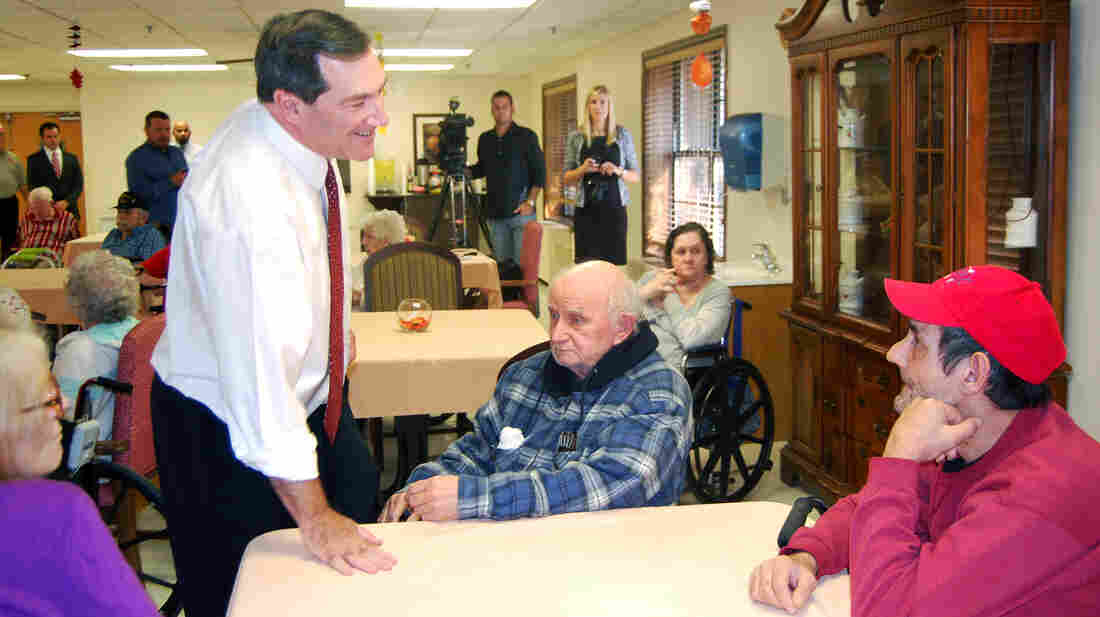 Joe Donnelly is counting on the auto industry bailout to help him out.

Donnelly, a third-term Democratic representative, is running for U.S. Senate in Indiana, which remains heavily dependent on the auto and RV industry. His opponent, GOP state Treasurer Richard Mourdock, not only opposed the bailout of Chrysler, but sued to block it.

"Richard Mourdock singlehandedly tried to destroy the U.S. auto industry," Donnelly says in an interview. "It was never about anything other than his own political career."

That position, along with some other Mourdock missteps, has given Donnelly a chance in a state no one expected to go Democratic this year. And that, in turn, has contributed to the sense of optimism among Democrats that they may be able to maintain control of the Senate this year.

In the most recent poll, Donnelly held a narrow lead — 40 percent to his rival's 38 percent — with lots of voters still undecided. (For more on the matchup, check out our Tale of the Tape.)

That poll has drawn considerable attention from national party fundraisers and superPACs, which are now playing a bigger role in the race. But there's still a question of whether Donnelly can raise enough funds to overcome Mourdock's natural advantages in what one Indiana Democrat described as "a scarlet-red state."

"Joe's had a lot of trouble," says Chris Sautter, a Democratic consultant based in Washington, D.C., who hails from Indiana.

"He's had to work twice as hard to make the money he's been able to get than any of the other races around the country, because this is Indiana," Sautter says.

Mourdock won his nomination in May, unseating 36-year incumbent Sen. Richard Lugar in the GOP primary. Mourdock carried 90 of the 92 counties in that contest, notes Ed Feigenbaum, editor of the newsletter Indiana Legislative Insight — including counties where it was thought the auto bailout would hurt him. 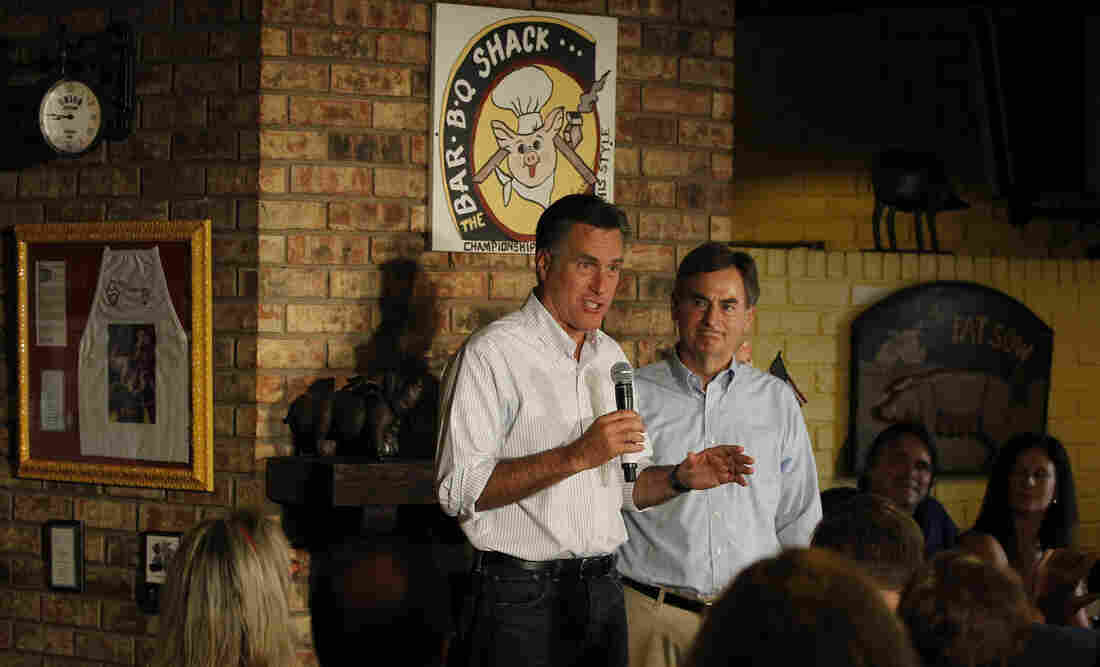 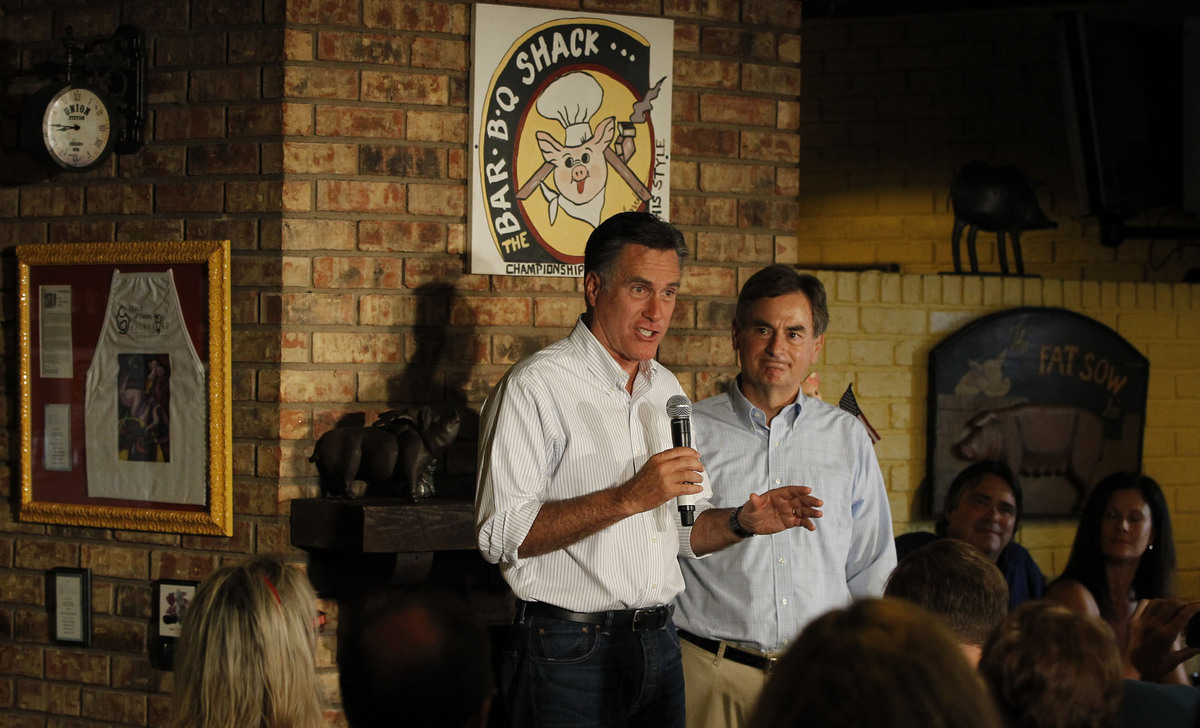 Mourdock managed to portray Lugar as out of touch with the state and the times, raising questions about the senator's legal residency in Indiana and presenting him as too willing to compromise with President Obama and other Democrats.

Many Lugar supporters, who are legion in Indiana, remain upset by Mourdock's challenge and his perceived lack of graciousness in victory. Six years ago, Democrats did not bother fielding a candidate against Lugar, believing any dime spent opposing him would money wasted.

"When he beat Lugar, that took away almost a guaranteed slot, I believe," says Gary Gulledge, the Republican candidate for coroner in Vanderburgh County.

Mourdock continues to be hurt by his apparent rejection of the very idea of compromise. The day after the primary, Mourdock appeared on CNN and other news shows and said bipartisanship means Democrats joining with Republicans to push the GOP's agenda. A month earlier, he had complained, "We need less bipartisanship in Congress."

Mourdock is now running an ad showcasing GOP Lt. Gov. Becky Skilman extolling his virtues as a collaborative leader. Not everyone is buying it.

"Mourdock is the one they're making a joke of, with that 'my way or the highway,' " says Carol Wilmes, an Evansville homemaker. "That seems stupid to me, for an adult politician. They should work together."

But Mourdock should not be mistaken for the type of Tea Party-backed candidate who wins the primary and is unable to prevail in the general election, says Feigenbaum.

"Richard Mourdock is not a radical extremist who is out of touch with the state of Indiana," he says. "When he ran in 2010, he led the ticket."

John Alling, a furniture dealer in Newburgh, says he's in tune with Mourdock's views about limiting the size of government. "I was very pleased that he ended up beating Lugar," he says.

Alling says Democrats were smart to nominate a moderate like Donnelly, because a "far left" candidate would have no chance in Indiana.

But if Mourdock has presented Donnelly with some openings, the Democrat is having to work hard to take advantage of them. Donnelly started the race little known outside his South Bend-based district and is being outspent by Mourdock and supportive superPACs.

"I serve in Congress," Donnelly softly tells about two dozen seniors gathered in the cafeteria of an Evansville nursing home. "My name is Joe."

Although Donnelly likes to present himself as a humble public servant looking out only for the best interests of the state, he's consistently been on the attack against Mourdock. Many Republicans dismiss the idea that Donnelly will win over vast numbers of GOP voters in the end.

Help From Other Races

Four years ago, Obama became the first Democratic presidential candidate to carry the state since 1964. No one thinks he'll repeat that feat, or that the Democrats have any chance in this year's gubernatorial election.

"I think Gov. [Mitt] Romney's strong polling here in Indiana and what I'm sure will be a good performance on Election Day in Indiana will help Mourdock," says Lloyd Winnecke, the Republican mayor of Evansville.

Everyone expects the Senate race to be close. If Obama can keep the presidential race reasonably close in Indiana — say, within single digits — that will give Donnelly a shot, says Robert Dion, a political scientist at the University of Evansville.

But he doesn't see any evidence that Lugar supporters bear enough of a grudge to support Donnelly en masse. They may not be ready to tell pollsters they're with Mourdock, but when it comes time to vote, many will come home to their party's nominee.

"The lore of this campaign is that Donnelly will be carried across the finish line by Lugar voters," Dion says, "and that's just not so."