Accessibility links
The Not-So-Great Communicator: Is Obama Overrated As A Speaker? : It's All Politics Since becoming president, Obama's rhetorical triumphs have been just that: moving speeches delivered on ceremonial occasions. When it comes to policy and attempts to move public opinion, the silver-tongued Obama has largely been absent.

The Not-So-Great Communicator: Is Obama Overrated As A Speaker?

The Not-So-Great Communicator: Is Obama Overrated As A Speaker? 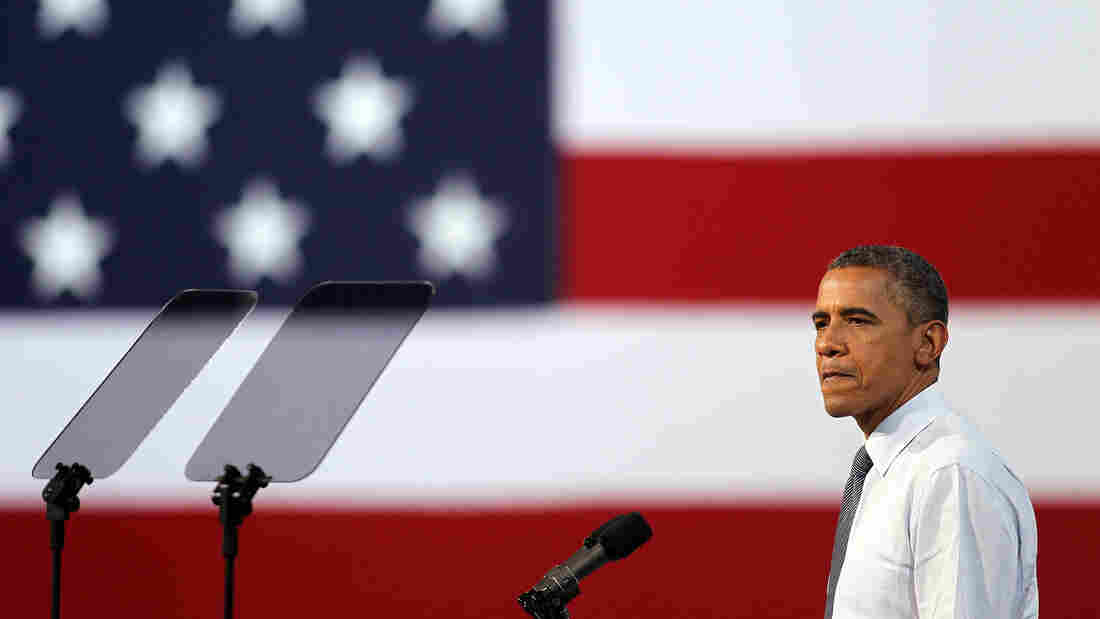 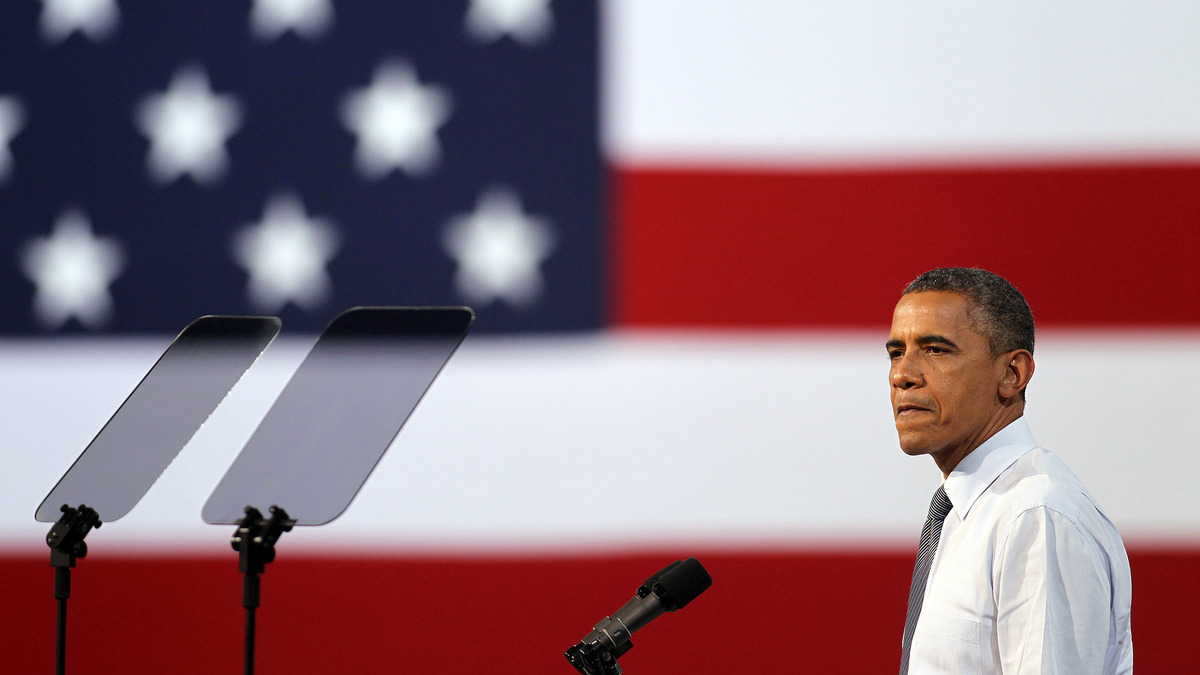 For a man who was elected president partly on his ability to give a great speech, Barack Obama has been at times a surprisingly poor communicator in office and on the campaign trail.

That may have been most evident earlier this month during the first presidential debate. But Obama generally hasn't been as impressive at getting his message across in his four years in the White House as he was during the campaign that put him there.

His relatively few press briefings have drawn mediocre reviews, and it's hard to think of a single speech he's delivered as president that was as powerful as several he gave when originally running for the office.

"He has had trouble rhetorically in selling his vision," says Martin Medhurst, a professor of rhetoric and political science at Baylor University. "In the last couple of years, he has not really given any memorable addresses and seems to have been on the defensive a great deal."

Republicans have frequently sought to denigrate Obama by suggesting he's nothing without a Teleprompter. Some accuse him of only making speeches and not doing the spadework of schmoozing members of Congress or convincing the public through concerted effort.

Prior to taking office, Barack Obama was like a living greatest-hits record, delivering one high-impact speech after another.

The Keynote Speech: His remarks at the 2004 Democratic National Convention put him on the national map.

The Iowa Speech: He set the stage for his crucial 2008 victory in the state's caucuses with a brilliant political address there.

The Race Speech: When his 2008 candidacy seemed headed into a tailspin following incendiary snippets of sermons by his pastor, Obama delivered a speech titled "A More Perfect Union" that is considered one of the greatest political speeches of contemporary times.

The Iraq Speech: Even before becoming a presidential candidate, Obama's credibility and stature had been enhanced by a prescient address in 2002 decrying the Iraq war.

"I don't think any speech he gave as president ever moved the dime in Congress or the country," says David Carney, a GOP consultant. "Maybe we don't remember his speeches because they had no effect."

Even some Obama supporters fret that the president hasn't been able to make a persuasive presentation about his own successes in office, such as the 2010 health care overhaul.

"He's a terrible salesman for his own stuff," says Paul Glastris, a former speechwriter for President Bill Clinton and editor-in-chief of The Washington Monthly.

There's no question that Obama as president can still deliver a great speech. Glastris and other political speech experts cite several notable examples, including his simple, direct tribute to the four Americans killed last month in Benghazi, Libya; his remarks in accepting the 2009 Nobel Peace Prize; and his speech last year paying tribute to Rep. Gabrielle Giffords and others shot in Tucson, Ariz.

Powerful though they may have been, those speeches were all either ceremonial or an explication of general principles. They weren't attempts to move public opinion on a specific issue.

"He's not found a way to create the conditions with his speechwriters so that he achieves greatness with the speeches that often matter the most, where he's trying to move some policy," Glastris says.

Obama may have been more comfortable speaking as a candidate than as the top national leader, suggests Rajan Menon, a City College of New York political scientist.

He compares Obama to Lech Walesa of Poland and Boris Yeltsin of Russia — opposition figures who were able to rally people by pointing out the bankruptcy of the status quo, but who failed to inspire once in power.

"Obama's magnificent as an oppositional orator — creating hope, laying out a vision, energizing people," Menon says. "But those skills don't necessarily translate into managerial oratory, by which I mean mobilizing support to take on the opposition and get through the blueprint you laid out."

Putting It All Together

Any president will necessarily have to address more mundane topics than a mere candidate. And it's hard to craft soaring rhetoric for, say, an announcement of an increase in the federal budget for mammograms.

Such stylistic challenges, however, may be less important than what Obama actually wants to talk about. Or not talk about.

Obama has not mounted much of a defense during the current campaign for his health care law. The fact that one-third of the cost of his 2009 stimulus law was the result of tax cuts has remained seemingly one of the best-kept secrets in Washington.

Taking credit for killing Osama bin Laden has become a campaign staple. But Menon says that for about a year Obama trumpeted that accomplishment much less than any other president would have.

Glastris argues that the president has done a poor job not only of touting his individual policy successes, but of stitching them together into a coherent narrative — explaining how health care, banking regulation, green energy and education policy all buttress each other as part of a plan to help the economy and the average person.

Obama tried something like this at the outset of his presidency, speaking of a "new foundation for growth" in his inaugural address, but wrapping his disparate policies into a single package is not an approach he's generally stuck with.

Obama's failure to weave the various threads he has pursued into one fabric explains why his acceptance speech last month at the Democratic National Convention fell a little flat, Glastris says.

"There's no sense of an overarching program at all," says Geoffrey Nunberg, a linguist at the University of California, Berkeley.

Obama derided Republican rival Mitt Romney's performance during their first debate, saying it "wasn't leadership" but "salesmanship." But it's Obama who has failed to make the sale, says Glastris, the Washington Monthly editor.

In an article earlier this year, Glastris argued that Obama has moved more in terms of "sheer legislative tonnage" than any president since Lyndon Johnson, but has been "surprisingly inept" at explaining to the country what he's up to and what he's achieved.

"It's like he doesn't want to brag about his own accomplishments — that's for others to do," Glastris says in an interview. "Dude, whose job is it to sell your stuff? Your job."

Following his party's historic losses in the 2010 midterm elections, Obama told CBS News that "leadership isn't just legislation ... it's a matter of persuading people." Tuesday's debate and the results of next month's election will be the final tests of how well the president has learned that lesson.