Accessibility links
Study: Secret Donors Significantly Fueling Pro-Romney TV Ads : It's All Politics Most of the TV ads supporting Mitt Romney have come from outside groups, not from Romney's own campaign. And those groups raised more than half of their money from secret donors, a much higher proportion than the secret donors backing President Obama, according to a new analysis. 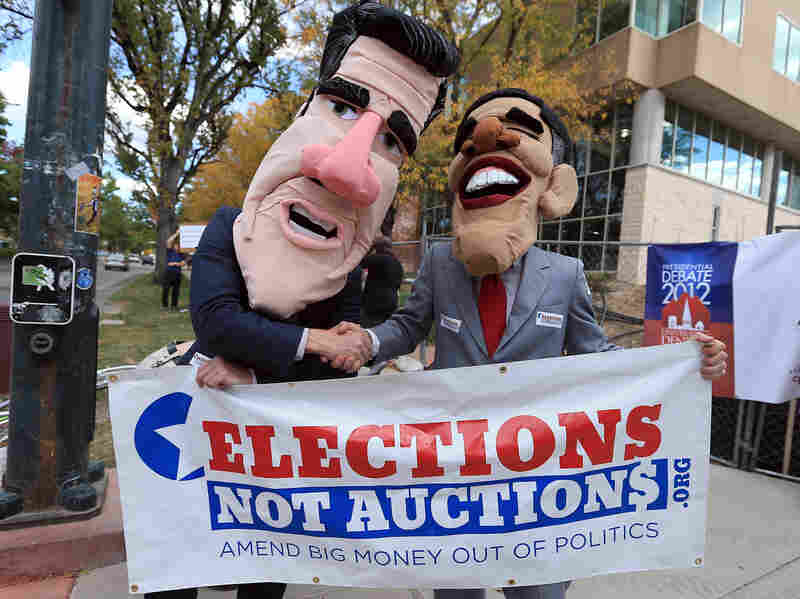 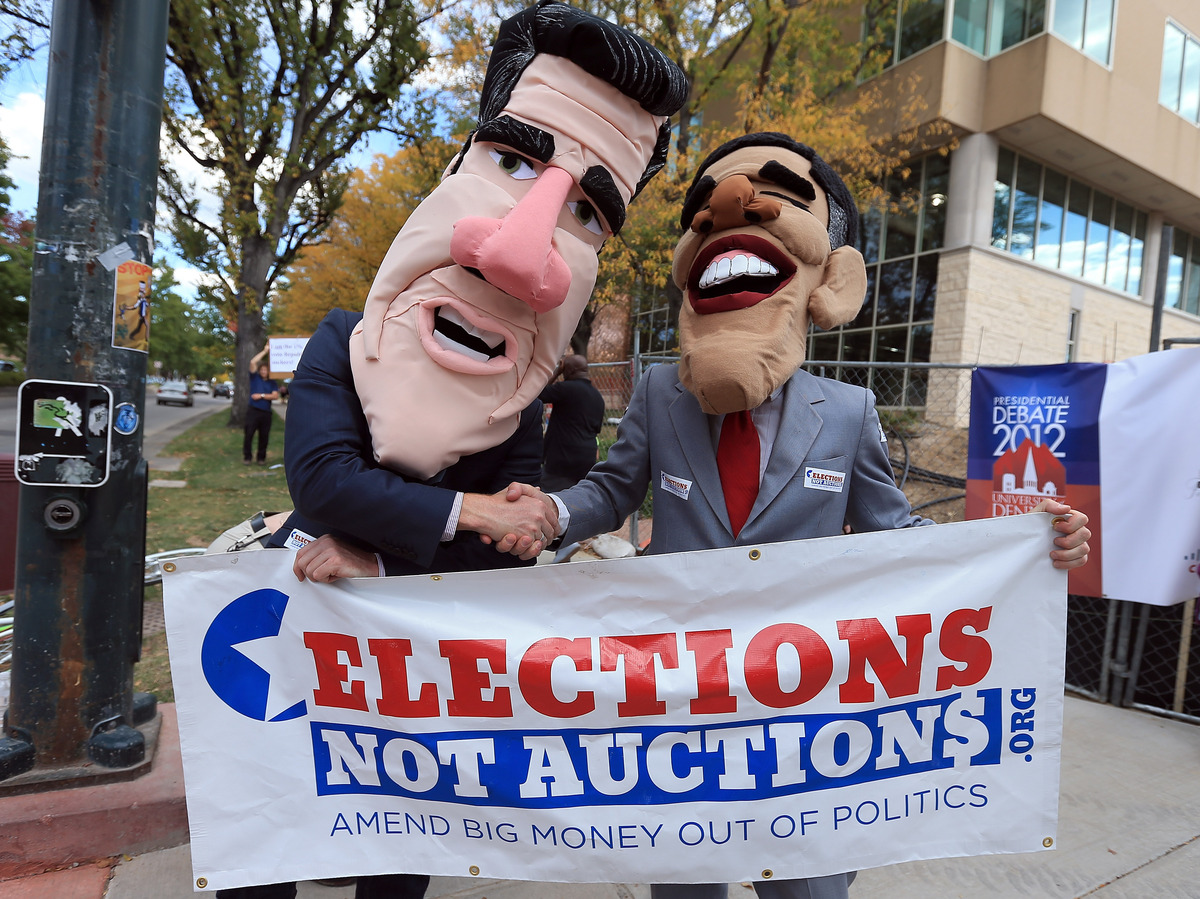 Costumed demonstrators on Oct. 3 in Denver, before the first presidential debate.

Since April, most of the TV ads supporting Republican presidential nominee Mitt Romney have come from outside groups, not from Romney's own campaign. And those groups raised more than half of their money from secret donors, according to a six-month study of ads.

From April through September, Romney for President aired slightly more than 144,000 ads on broadcast TV. The outside groups supporting him ran nearly 250,000.

That enabled Romney to start saving cash for a last-minute TV blitz, which has just now begun.

This is the first presidential campaign since the Supreme Court's Citizens United ruling of 2010. And it's giving us a good look at how that decision and other recent court cases have changed politics.

"I think there are two things going on. One is that the explosion of reported spending sort of encouraged more big donors to get into this space, to give large sums of money and be more active in politics," Mason says.

"The second thing that occurred is people looking around at the different reporting and other legal consequences," Mason says.

SuperPACs sprang up soliciting donors for seven- or even eight-figure contributions.

But for some donors, the trouble with a superPAC is it has to disclose their names. But other groups — the 501(c)(4) tax-exempt groups known as social welfare organizations — do not.

"For donors who wanted to spend money on politics but perhaps not have their names disclosed publicly, the (c)(4) option was much more attractive," says Mason.

Soon after Citizens United, Karl Rove and other Republican Party leaders founded the 501(c)(4) Crossroads GPS and the superPAC American Crossroads. They became the biggest outside advertisers for Romney, spending an estimated $70 million since April attacking President Obama on TV.

More than half of the money has flowed secretly through Crossroads GPS.

Earlier in the election cycle, tax returns from Crossroads GPS showed that nearly 90 percent of its funds came from as few as 16 donors; two donors gave $10 million each.

"I think it defies common sense to think that these ... 'social welfare organizations' — that exist apparently to attack political candidates, sometimes support political candidates — that they are truly educational or socially oriented," says Sheila Krumholz, director of the nonpartisan Center for Responsive Politics, which tracks money in politics. "I don't think anybody buys that argument."

NPR and PBS NewsHour used data from Kantar Media CMAG — which tracks political ads — to do this analysis of presidential campaign advertising. It tracked ads since April 10 — when former Pennsylvania Sen. Rick Santorum dropped out of the race, essentially ceding the Republican nomination to Romney and marking the unofficial launch of the general election campaign — through Oct. 10.

The analysis shows how Crossroads GPS and another social welfare group split the burden of advertising this year. They alternated a few weeks at a time, almost always putting at least $1 million per week into anti-Obama ads.

Crossroads' partner is Americans for Prosperity, which has the backing of billionaires David and Charles Koch.

For the 501(c)(4)s, donor secrecy is an essential element. The ads themselves are often indistinguishable from superPAC ads.

The superPAC American Crossroads spent about $11.5 million on this ad, the most widely distributed of any of the ads by outside groups attacking President Obama's job record.

The ad aired most often by any of the outside groups attacks Obama's job record. The superPAC American Crossroads spent about $11.5 million on it.

The second most common ad is from Crossroads GPS. It cost roughly $8.5 million and carries a similar message, saying Obama has failed to create a significant number of new jobs. Its tagline: "Tell President Obama: For real job growth, cut the debt. Support the new majority agenda."

Neither ad tells the viewer to vote against President Obama.

The story among Democrats is simpler: 91 percent of the ads have come from the Obama campaign, financed with donations that are capped at $5,000 and disclosed.

As for liberal outside groups, they spent $3 million from secret donors — compared with $87 million by conservative groups.

"Will this money ever be disclosed?" asks Krumholz. "We have no idea the degree to which this is funded by wealthy individuals or organizations for whom it's far preferential to fly under the radar."

Occasionally, information about secret donors leaks out. But those leaks have in no way kept up with the flood in secret contributions.