Accessibility links
In The Second Debate, It's All About The Counterpunch : It's All Politics During tonight's presidential debate, President Obama will want to cast Mitt Romney as an unacceptable, unreliable choice. But Republicans think their man can come close to sealing the deal simply by doing what he in the first debate. Both candidates will need to fire up supporters without coming off as nakedly partisan.

In The Second Debate, It's All About The Counterpunch

In The Second Debate, It's All About The Counterpunch 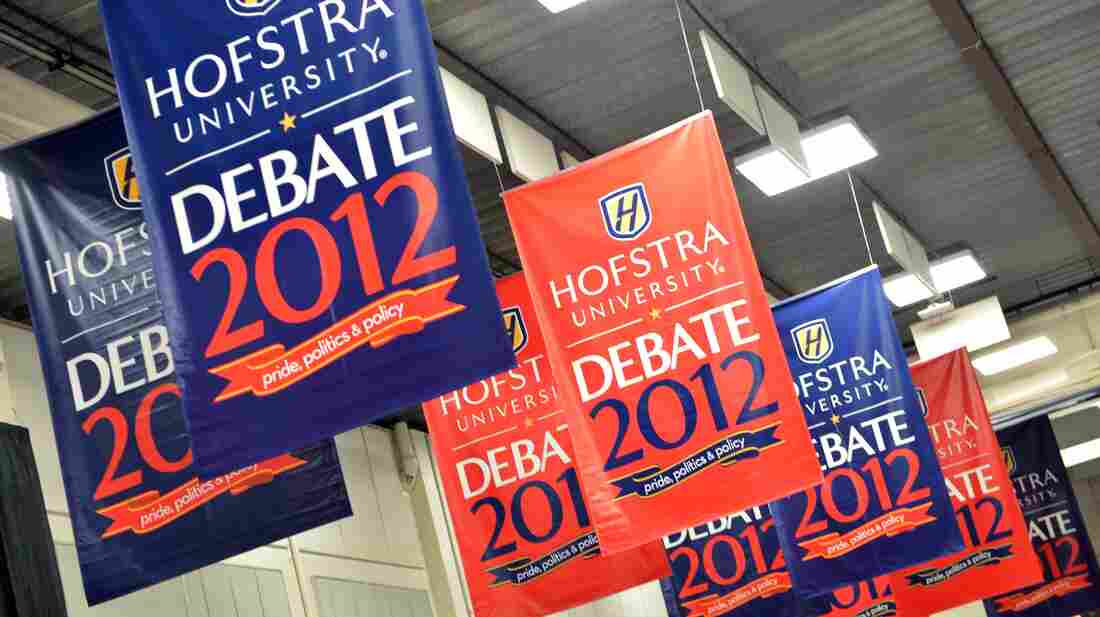 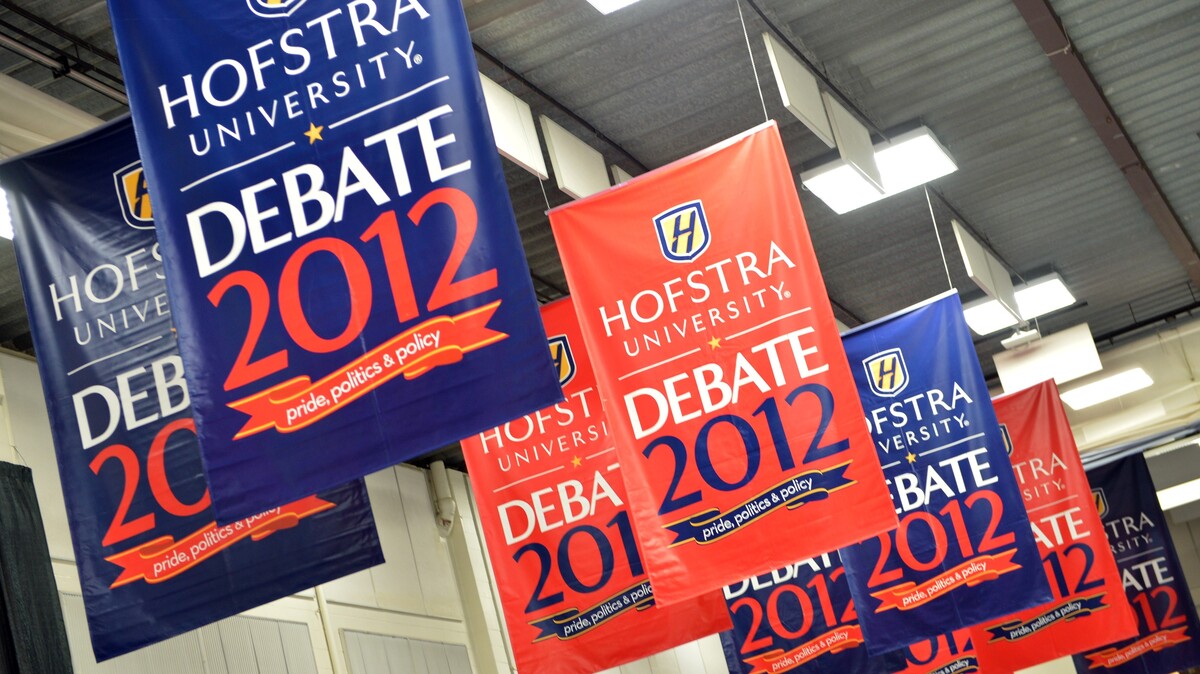 Banners hang inside the media center amid preparations for tonight's presidential debate at Hofstra University in Hempstead, N.Y.

Tonight's presidential debate in New York is shaping up like an episode of the old game show To Tell the Truth: Will the real Barack Obama/Mitt Romney please stand up?

There are a lot of questions about what personas and strategies the two candidates will choose to adopt. Partisans on both sides argue that their man's opponent is a shape-shifter.

Democrats are convinced that part of the reason Romney won their first debate earlier this month is that he shamelessly lied about his own positions in tacking to the center.

"Mitt Romney seems to change who he is more than he changes his socks," says R.T. Rybak, the Democratic mayor of Minneapolis. "We don't know who Mitt Romney is, and I imagine he'll change himself one more time this week."

On the flip side, Republicans fully expect to see a different President Obama than the rather listless candidate who appeared on stage during the first debate.

Like many Democrats, Griffin predicts Obama will be more aggressive on the Hofstra University stage and at the same time try to be more respectful than his grinning, giggling running mate, Joe Biden, was during the vice presidential debate last week.

Changing The Subject Back

Romney won the first debate not just because of his aggressive posture, but by using detailed answers to present himself as a challenger well-prepared to assume the mantle of presidency. He managed in one night to undo much of the work the Obama campaign had done to try to make him seem out of touch.

"In the first debate, the minute Obama stepped out on that stage, he lost — without opening his mouth — because suddenly voters realized that this is a referendum on Obama," says William Schneider, a professor at George Mason University's School of Public Policy in Virginia. "People realized we have to decide whether to rehire this guy or fire him."

Obama's task in this debate is to change the subject back to Romney, touching up his campaign's portrait of the Republican as someone who is looking out for the interest of the wealthy elites at the expense of most Americans.

"I guarantee you that the president's team and the president have looked for every possible way to interrupt and take control of the conversation in their practice sessions," Griffin says. "I expect him to come out fast and hard."

Obama neglected in the first debate to hector Romney about such matters as his career as a venture capitalist or his videotaped remarks about the "47 percent" of Americans who are "dependent upon government."

He won't neglect such topics this time around.

"He is the president, but he needs to show the American people that he is that fighter for them, that he still has a lot of work to do and that his policies are going to work better than those of Mitt Romney," says Leticia Van de Putte, a Democratic state senator in Texas.

Obama may want to touch on issues that had been polling well for him prior to the first debate, such as reproductive rights for women. On those matters, as well as on economic and foreign policy, Obama's task will be to suggest that Romney's views — the ones he talked about throughout most of the campaign year, if not over the past two weeks — are unacceptable.

Given the still-shaky economy and the president's approval ratings, which are hovering just around 50 percent, that's the only way for Obama to win, says Henry Olsen, a vice president at the American Enterprise Institute, a conservative think tank.

"You've got to dance with the girl that brung you," Olsen says.

But neither Obama nor Romney has control of tonight's agenda. Although both candidates will want to spend the evening firing up their base of supporters, they'll have to do so in a room where naked partisanship may be frowned upon.

The questions in this town hall-style debate will be asked by members of an audience made up of undecided, registered voters.

"If President Obama wants to go into this debate like Joe Biden last week, that won't go over with an audience of undecided voters," says Schneider, who is also a senior fellow and resident scholar at Third Way, a centrist think tank. "They want problem-solving, and their most deeply held belief is that politics is the enemy of problem-solving."

Aside from style, audience members may throw out questions that the candidates aren't prepared for. And their concerns could be quite different from those of journalistic debate moderators.

They might bring up important issues that have gone without much mention in this campaign season, such as gay marriage or immigration.

The town hall-style format frames questions the way undecided voters do, says Andrew Romanoff, a former Democratic speaker of the Colorado House — questions like, "Tell me how my life will get better if I put you in charge, instead of the other guy.

"What happens to my bank account? What happens if someone in my family gets sick? Tell me if my kid is going to get a job when he gets out of school," Romanoff says. "Sometimes those bread-and-butter concerns get lost in a blizzard of statistics and studies."

Romney has sometimes stumbled when asked unexpected questions by members of the public. He could face a "YouTube moment" if asked something that puts him on the spot, says Jack Pitney, a government professor at Claremont McKenna College in California.

Pitney imagines a woman asking, "Gov. Romney, I just had an abortion. Do you think I belong in jail?"

But AEI scholar Olsen says the format also gives Romney the chance "to address his most damaging weakness" by convincing the public that he's up to the job of president not just on a managerial level but also on an emotional level.

"If he, in a relatively unscripted setting, can demonstrate the type of sincerity and kindness and articulateness that he had in the first debate, then it almost doesn't matter what he says," Olsen says.

Although much media speculation leading up to tonight has turned on the question of whether Obama can stage a comeback from the first debate, the Romney camp is hopeful that the second encounter will give their man the chance to continue, if not complete, a successful wooing of a majority of the American electorate.

"What happened in the first debate was, with everybody paying attention, Romney demonstrated he sure enough was an acceptable alternative," says Republican consultant John Hancock. "That probably dealt as big a blow to the Obama campaign apparatus as anything else."