Accessibility links
Five Takeaways From The Second Presidential Debate : It's All Politics Other takeaways from Tuesday's debate: President Obama gets tough while his GOP rival, Mitt Romney, gives no ground; voters are unhappy; candidates can't let go of the past; and the debate on foreign policy is truly teed up.

How Obama Got His Groove Back, And Other Debate Takeaways

How Obama Got His Groove Back, And Other Debate Takeaways 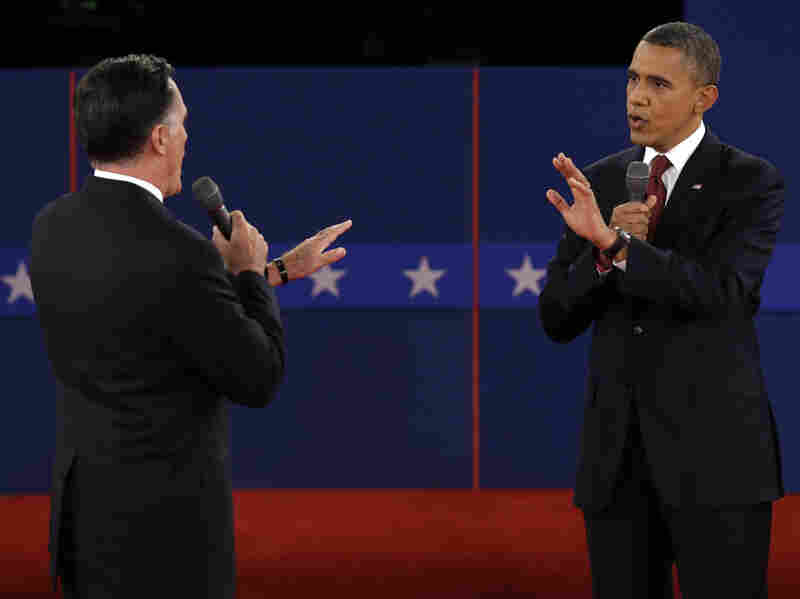 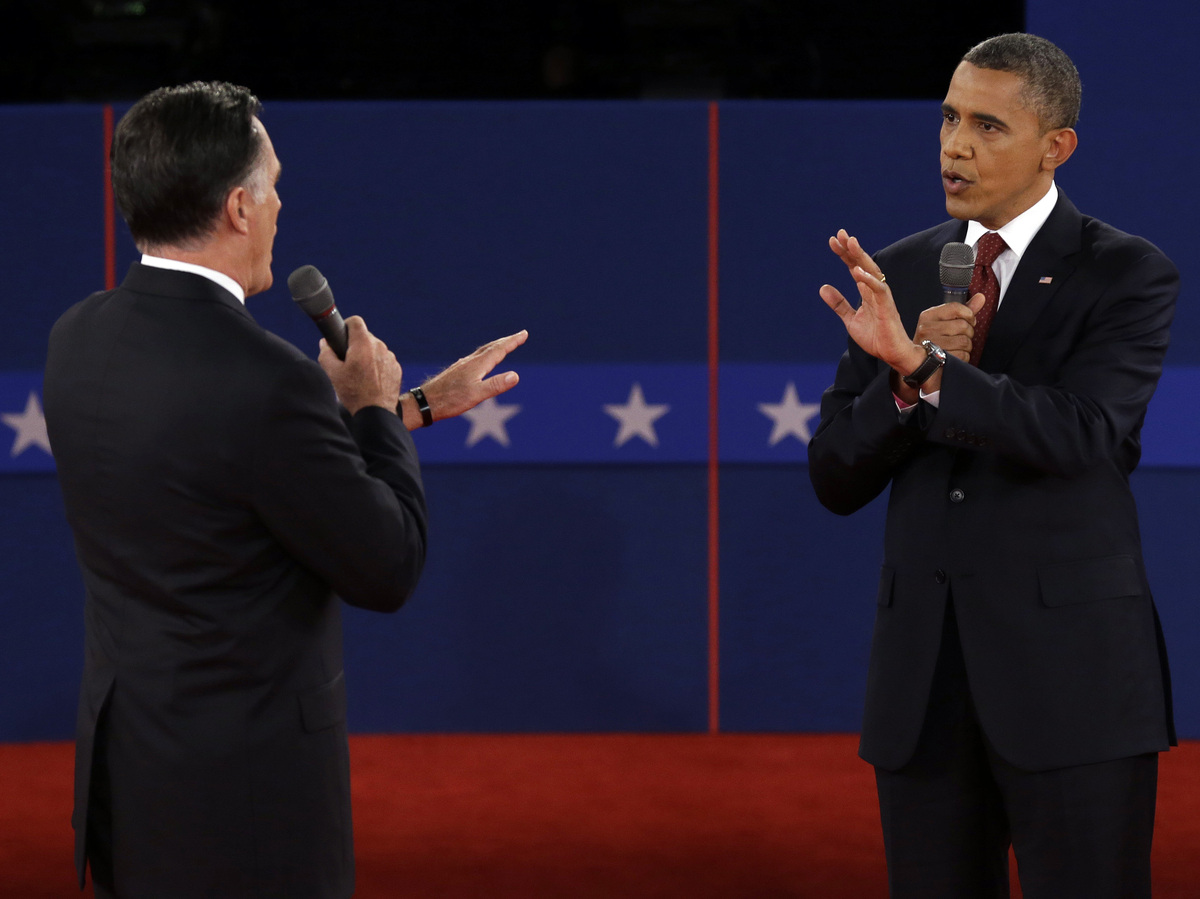 Anyone who thought the presidential candidates couldn't get aggressive within a town hall-style format underestimated the sharp differences in policy that divide them.

President Obama and Mitt Romney remained continuously critical against one another throughout their second debate Tuesday night. Neither ever seemed to finish a statement without launching an attack against his opponent.

The two men differed over economic policy, immigration, gun control and essentially every subject that was brought up in questions from members of the audience at Hofstra University. A rare moment of accord came when they discussed the importance of education.

Obama clearly sought to regain the advantage he had enjoyed among women, frequently invoking Planned Parenthood and contraception. Romney said that as governor of Massachusetts he had made every effort to hire women, noting he'd gathered "whole binders full of women."

All in all, the debate may not have reshaped the race, but it served to underscore the starkly different approaches the two major party candidates would take to address the nation's problems.

How Obama Got His Groove Back

Obama had been widely criticized for his desultory and politically disastrous performance in the first debate, back on Oct. 3, which appears to have cost him his lead in the national polls.

He came prepared for this fight, ready to defend his record and to put the knock on Romney at every opportunity. Obama remained focused, leaning forward eagerly in his chair while waiting for his turn to speak, and giving no quarter when it was his time to stand up and deliver.

His mantra in response to many of Romney's remarks was to say, "It just isn't true." After failing to do so in the first debate, Obama attacked his challenger about his career as an outsourcer of jobs and chided him for his infamous remarks about 47 percent of Americans believing themselves to be victims.

Romney tried to fend off Obama's complaints at one point by suggesting that Obama check the investments his own pension fund makes to see if he doesn't also hold investments in Chinese companies.

But if every political junkie in the land knew that Obama would want to go on offense, Romney himself gave no quarter. He complained that the president had mischaracterized his record and rhetoric on issues such as tax policy.

For the most part, though, Romney concerned himself with pointing out Obama's failures. About two-thirds of the way through the debate, he launched into a litany of problems on the president's watch — persistently high unemployment, trillion-dollar deficits, the failure to reform entitlements, the lack of a plan to address illegal immigration and an increase in poverty and the number of people receiving food stamps.

"The middle class is getting crushed under the policies of a president who has not understood what it takes to get the economy working again," Romney said. "The policies he's put in place, from Obamacare to Dodd-Frank to his tax policies to his regulatory policies — these policies combined have not let this economy take off and grow like it could have."

Many Voters Are Not Just Undecided But Unhappy

Several of the questions asked by the undecided voters in the Hofstra audience amounted to bread-and-butter rephrasings of larger campaign themes, such as the state of the economy. One man wanted lower gas prices, while a college student was nervous about finding a job after graduation.

But some of the questioners made their unhappiness with the candidates quite clear. One of them, Michael Jones, told Obama that while he had voted for him back in 2008, "I'm not as optimistic as I was in 2012. Most things I need for everyday living are very expensive."

"We've gone through a tough four years, there's no doubt about it," Obama conceded, before offering a litany of achievements he's proud of, such as cutting taxes and killing Osama bin Laden.

The Candidates Argued Ceaselessly Over The Past

Former presidents George W. Bush and Ronald Reagan both figured prominently in the debate. Romney was confronted by a question from Susan Katz, who said she attributes "much of America's economic and international problems to the failings and missteps of the Bush administration." She challenged Romney to explain how he would avoid a repeat of the Bush presidency.

Romney sought to turn the question into an opportunity, suggesting he held several differences with his fellow Republican, promising to do a better job in promoting trade and small businesses and confronting China than President Bush did.

Obama was having none of it. He put his own predecessor in a more flattering light than Romney, arguing that Bush had pursued superior policies when it came to Medicare and immigration.

Romney also said his opponent suffered by comparison with a Republican president, saying Reagan had created more jobs following a deep recession than Obama has.

Obama offered one final blast from the past, brushing off a line from Bush's re-election campaign.

"I think Gov. Romney was for an assault weapons ban before he was against it," Obama said, echoing a comment that haunted Massachusetts Sen. John Kerry — Obama's debate prep sparring partner — in his 2004 race against Bush.

The Debate On Foreign Policy Is Well And Truly Teed Up

Foreign policy will be the subject of the final presidential debate next Monday. It was little discussed at Hofstra, but the subject still provided perhaps the most heated moment of the town hall debate.

In recent weeks, Romney has frequently criticized Obama for the events last month at the U.S. Consulate in Benghazi, Libya, that ended with the death of four Americans, including Ambassador Chris Stevens.

During the debate, Romney said the administration's response to events had been confused for days, with various officials either characterizing them incorrectly or disturbingly failing to understand properly what had happened.

He said the incident "calls into question the president's whole policy in the Middle East," arguing that things were out of hand not just in Libya but in Syria and Egypt as well.

Obama took full responsibility for what happened in Benghazi, but he also took offense at Romney's suggestion that he had neglected the crisis in favor of campaigning. The president's remarks were peppered with anger and conviction as he described his task in greeting the caskets when they returned home.

But he also sought to score points with humor. After Romney questioned Obama's claim to have described the Benghazi killings as an "act of terror" in the Rose Garden the day after they occurred, moderator Candy Crowley of CNN backed up the president's account.

"Can you say that a little louder, Candy?" Obama asked, triggering a rare moment of laughter.